Small-cell lung cancer accounts for 14% of lung cancers (1), and is the most lethal subtype with rapid doubling time, high growth fraction and early metastases (2). Most patients are diagnosed as extensive-stage, and the prognosis is quite poor for a survival only 2–4 months without treatment (3). The rapid development of precision medicine leads to revolutionary changes in management of non-small cell lung cancer (NSCLC), while the treatment of SCLC remains relatively stagnant especially for third-line and further-line treatment. Although checkpoint inhibitors such as nivolumab and pembrolizumab were successively approved by Food and Drug Administration (FDA) for third-line and further-line treatment (4,5), but these two drugs have not approved in China for SCLC indication.

Studies have shown that systemic inflammation is related to tumor proliferation, angiogenesis and metastasis (7,8). The responsive of systemic inflammatory has a definite effect on progressive nutrition, dysfunction and poor prognosis in tumor patients (8,9). Poor nutritional status was closely associated with poor outcome in a various of cancers (10,11). Onodera et al. proposed the concept of prognostic nutritional index (PNI) which is the mostly used marker of nutritional status (12). PNI is based on serum albumin concentrations and total lymphocyte counts in the peripheral blood and evaluates the potential impact of hypoalbuminemia and lymphocytopenia. Lymphocytes are an important cellular component of the inflammatory and immune systems, and also an indicator of poor prognosis. Hypoalbuminemia is not only an indicator of nutrient deficiency, but also suggests an increase in systemic inflammatory status. PNI was originally used to assess preoperative risk of colorectal cancer and as a determinant of surgical indications. Subsequently, PNI is widely used to evaluate the nutritional status of tumor patients. Several studies have suggested that PNI is a useful prognostic factor after treatment in patients with gastric cancer, colorectal cancer, liver cancer and lung cancer (13-17). For SCLC, researches have confirmed that pretreatment PNI can be a better predictor for the prognosis of SCLC and low pretreatment PNI is correlated with poor OS or PFS of SCLC patients (18-20). PNI can also indicate systemic inflammation which affects the growth and survival of tumor cells, promotes angiogenesis, metastasis and decreasing tumor sensitivity to treatments (21). Low pretreatment PNI can predict poor outcomes in patients with metastatic renal cell carcinoma or hepatocellular carcinoma treated by sunitinib or sorafenib (22-24).

However, the association between anlotinib and PNI has not been reported. Therefore, we conducted this retrospective study to explore the correlation between pretreatment PNI and survival in patients with extensive stage SCLC (ES-SCLC) treated with anlotinib. We present the following article in accordance with the REMARK reporting checklist (available at http://dx.doi.org/10.21037/jtd-20-755).

This study included patients with ES-SCLC treated with anlotinib for third-line or further-line treatment at the Jilin Provincial Cancer Hospital between March 2017 and May 2019 were enrolled in this study. The inclusion criteria were as follows: (I) cytologically or histologically confirmed ES-SCLC, (II) patients have progressed from at least 2 lines of chemotherapy, (III) available laboratory data from pretreatment blood samples, (IV) haven’t received antitumor therapy within 2 weeks before blood draw, including cytotoxic therapy, radiotherapy, other experimental anti-cancer therapy, (V) blood must be collected and tested within 7 days prior to anlotinib treatment, (VI) standard of blood routine test (no blood transfusion within 14 days), hemoglobin (HB) ≥90 g/L, absolute value of neutrophils (ANC) ≥1.5×109/L, platelets (PLT) ≥80×109/L, (VII) with sufficient medical information. All patients received anlotinib in a standard dose regimen, i.e., 12 mg/day, in 2/1 week cycles. Data were collected from the medical records including: demographic data, treatment information, best response classified according to Response Evaluation Criteria In Solid Tumors (RECIST) 1.1 criteria, results of hematologic tests before anlotinib treatment. The data was analyzed by professional statisticians, treatment records were evaluated by clinical experienced doctors. The last follow-up was on August 20, 2019.

The study was conducted in accordance with the Declaration of Helsinki (as revised in 2013) and the Harmonized Tripartite Guideline for Good Clinical Practice from the International Conference on Harmonization. This study was approved by Jilin Provincial Cancer Hospital ethic committee. In addition, all patients have signed the informed consent before receiving the anlotinib treatment.

Assessment of response and calculation of the pretreatment PNI

Responses to treatment were evaluated as complete response (CR), partial response (PR), stable disease (SD), and progressive disease (PD) according to the RECIST version 1.1. A third higher level physician examined the information above. All disagreements were resolved by discussion between three doctors until the consensus was reached. All patients received routine hematologic tests within seven days before the administration of anlotinib. The PNI was calculated as albumin (g/L) + 5 × lymphocyte (×109/L) and patients with an PNI <45 was considered as abnormal, as described previously (25). Body mass index (BMI) was calculated as body weight divided by height squared (kg/m2), and classified into 3 categories: underweight (BMI <18.5 kg/m2), normal (18.5 kg/m2 ≤ BMI < 24.0 kg/m2), while overweight or obese was defined if the BMI ≥24.0 kg/m2.

OS was measured from treatment initiation until death. Patients who were still alive were censored at the final follow-up. PFS was defined as the interval from treatment initiation until disease progression or death. Patients still manifested disease control were censored at the final follow-up. The overall response rate (ORR) included the CR and PR. Disease control rate (DCR)was defined as the proportion of patients whose CR or PR or SD lasted longer than 24 weeks.

Descriptive analysis was used for all variables. Counting variables were presented as percentages. The area under the curve (AUC) of receiver operating characteristics (ROC) curve was calculated to evaluate the discriminatory ability. PFS and OS were calculated and compared using the Kaplan-Meier method and the log-rank test. Multivariate Cox proportional hazards models was used to evaluate whether PNI or other baseline characteristics were associated with OS or PFS, include age, sex, BMI, ECOG PS, smoking history, CNS metastasis, liver metastasis, LDH and PNI. To arrive at the final multivariate model, all candidate variables were included whether which were significant on univariate analysis or not with enter selection. P<0.05 was considered statistically significant. Hazard ratios (HRs) and 95% CIs were calculated. All analyses were statistically analyzed using SPSS24.0 (Chicago, Illinois, USA) and R 3.4.3. 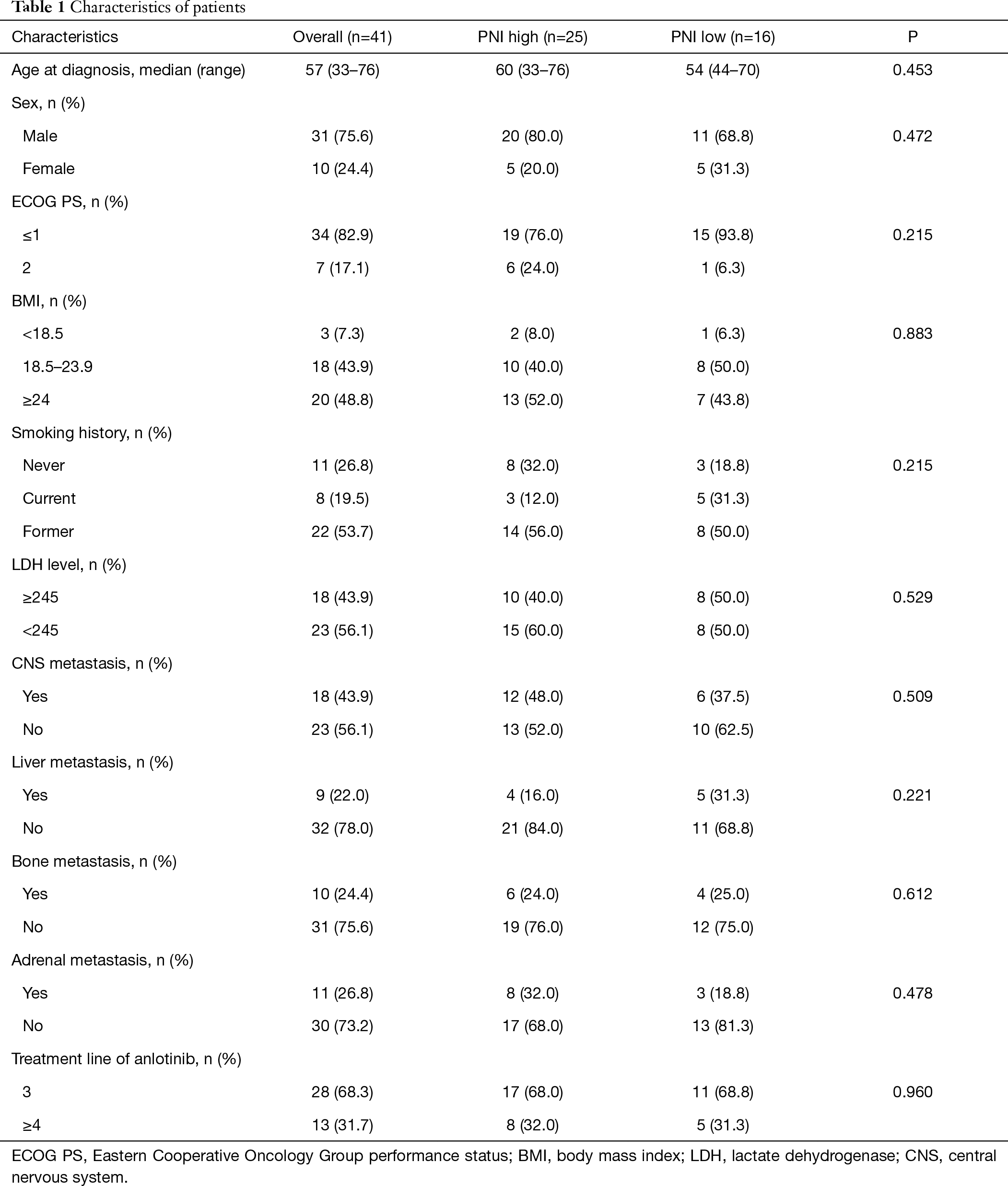 Efficacy of anlotinib in overall patients

Figure 1 Kaplan-Meier curves for progression-free survival (A) and overall survival (B) for all patients.

Relationship between pretreatment PNI and survival

Anlotinib was the first targeted drug approved for third-line and further-line treatment of SCLC. In this study, we focused on the predictive value of nutritional status in the outcomes of ES-SCLC. The results suggested that pretreatment PNI was significantly related to ORR and DCR in ES-SCLC patients treated with anlotinib. Furthermore, PNI was found to be a prognostic factor for OS.

There is increasing evidence that inflammation is an important factor in the development and progression of cancer (26). In addition, the products of inflammatory processes are considered to be potential biomarkers of tumor microenvironment because leukocyte infiltration is interconnected with angiogenesis and VEGF related molecules are contribute to the recruitment of monocytes into primary tumors (7). As a wildly used marker of nutritional statues, PNI is a particularly biomarker because it calculated from albumin and lymphocyte count. PNI can reflects the inflammatory system as well as the nutritional status. On the one hand, as one of the key immune cell, lymphocyte can indicate lymphocyte-mediated immune response to tumors (7). On the other hand, serum albumin is known as a meaningful indicator that reflects both the inflammatory reaction and nutritional status and has been shown to be independently associated with prognosis of patients with many cancers (27-29). In some studies, PNI has been verified play an important prognostic role in different types of cancers such as lung cancer, gastric cancer, pancreatic cancer and oral squamous cell carcinoma (11,30-32). Lung cancer patients with lower PNI is associated with adverse tumor features, such as large size, poor differentiation and metastasis (21). In SCLC patients treated with platinum-based chemotherapy, pretreatment PNI was a good biomarker for the assessment of SCLC prognosis (20).

As the only approved targeted drug for the treatment of SCLC, anlotinib has been widely used in the clinical treatment of SCLC, but the value of PNI in the prognosis and efficacy of anlotinib is still inconclusive. Other anti-angiogenic drugs such as bevacizumab for ovarian cancer and sorafenib for metastatic renal cell cancer have also observed a correlation between PNI and the clinical outcomes of anti-angiogenic drugs (24,33). Consistent with these observations, in the present study, our data confirmed that in patients with ES-SCLC, high pretreatment PNI had longer OS of anlotinib treatment. Although there was no significant difference in PFS between PNI high and PNI low arm, the value was numerically longer for PNI high patients. The efficacy of anlotinib was also favorable in PNI high arm, both ORR and DCR have obvious advantages.

This finding is the first observation to show the relationship between the PNI and anlotinib efficacy in cancer patients. PNI is a readily obtained and is more acceptable to patients with higher effectiveness-cost ratio. However, as a retrospective and single center study, there are some limitations including small cohort size, lack of a validation group and potential missing data, which may need further verified by prospective study. Finally, because anlotinib is only approved in China at present, the population of this study is only Chinese patients, so relevant exploration study of other races needs to be carried out in the future.

The present study suggested that pretreatment high PNI is an independent better prognostic predictor in ES-SCLC patients received anlotinib for third-line or further-line treatment. Further studies are needed to demonstrate this advantage.

Funding: This work was supported by grants from the Training program for Scientific and technological backbone of Jilin Province health and wellness (No. 2018Q006).

Reporting Checklist: The authors have completed the REMARK reporting checklist. Available at http://dx.doi.org/10.21037/jtd-20-755

Conflicts of Interest: All authors have completed the ICMJE uniform disclosure form (available at http://dx.doi.org/10.21037/jtd-20-755). The authors have no conflicts of interest to declare.

Ethical Statement: The authors are accountable for all aspects of the work in ensuring that questions related to the accuracy or integrity of any part of the work are appropriately investigated and resolved. The study was conducted in accordance with the Declaration of Helsinki (as revised in 2013) and the Harmonized Tripartite Guideline for Good Clinical Practice from the International Conference on Harmonization. The study was reviewed and approved by ethics committee of Jilin Provincial Cancer Hospital (approval number 201701-002-01). All patients enrolled completed the informed consent form.