Chronic obstructive pulmonary disease (COPD) is a common, preventable, and treatable disease that is characterized by persistent respiratory symptoms and airflow limitation (1). The global prevalence of COPD in people aged 40 years or older is estimated to be 11.7% (2), while it is 13.7% in China (3). The social burden, mortality, and disabilities attributed to COPD is reflected in its ranking as the sixth and fourth leading cause of disability-adjusted life years (DALY) globally and China, respectively (4). The prevalence of COPD across China varies greatly, which is partly due to the differing levels of exposure to smoke, ambient air pollution and socioeconomic factors (5). Economically developed cities have better air quality and longer average lifetime, which may affect the epidemiology of COPD. Suzhou, a city economically representative of most developed cities in eastern China, has not been surveyed in terms of its of COPD prevalence and related risk factors. Thus, the aim of this study was to investigate the epidemiology and risk factors of COPD in Suzhou.

A population-based, cross-sectional survey was performed in four communities of Suzhou, representing a population of approximately 1 million people across different geographical regions. In each community, a cluster sampling method was used to randomly select some housing districts. All individuals aged 40 years and older were assessed in these districts. The sample size was calculated based on the number of people in this age group. The study protocol was approved by the ethics review committee of the affiliated Suzhou Hospital of Nanjing Medical University (K2018013). The study was conducted in accordance with the Declaration of Helsinki (as revised in 2013).

Subjects were recruited by phone or home visit. All subjects who agreed to participate were interviewed in community hospitals by medically qualified doctors, delegated to perform informed consent-related duties. All subjects were informed of the purpose, process, benefits and risks of the research, before consenting to screening procedure. All subjects who displayed diseases which affected lung function such as lung cancer, bronchiectasis, cardiovascular disease, or cerebrovascular disease, were excluded. Patients exhibiting failure of spirometry or a history of pulmonary surgery were also excluded. Subjects were asked to complete a standard questionnaire and underwent blood routine testing, blood biochemistry testing, along with post bronchodilator spirometry.

The categorical variables were gender, smoking status, family history of smoking, occupation exposure, chronic cough and phlegm, breathlessness, hypertension, and diabetes. If there was normal distribution, the differences between these variables were determined by Chi-square tests, otherwise, the Kruskal-Wallis test was used. Age, BMI, smoking pack years, grip strength, blood index and pulmonary function index were treated as continuous variables. If there was normal distribution, the difference between these variables was assessed by independent samples t-test and analysis of variance (ANOVA) tests, otherwise, the Kruskal-Wallis test was used. Potential risk factors for COPD were determined with binary or multivariable logistic regression models. All statistical tests were performed with SPSS21.0 (IBM, USA), A P value of less than 0.05 was deemed significant.

From June 2018 to December 2018, 4,864 subjects (2,242 male and 2,622 female) were identified in the study. After excluding people with diseases that might have influenced the spirometry results, or those without an eligible pulmonary function test, 4,725 subjects (2,188 male and 2,537 female) completed the study and were included in the final analysis (Figure 1). The average age of the total population was 62.2 years, and ranged from 40 to 95 years. 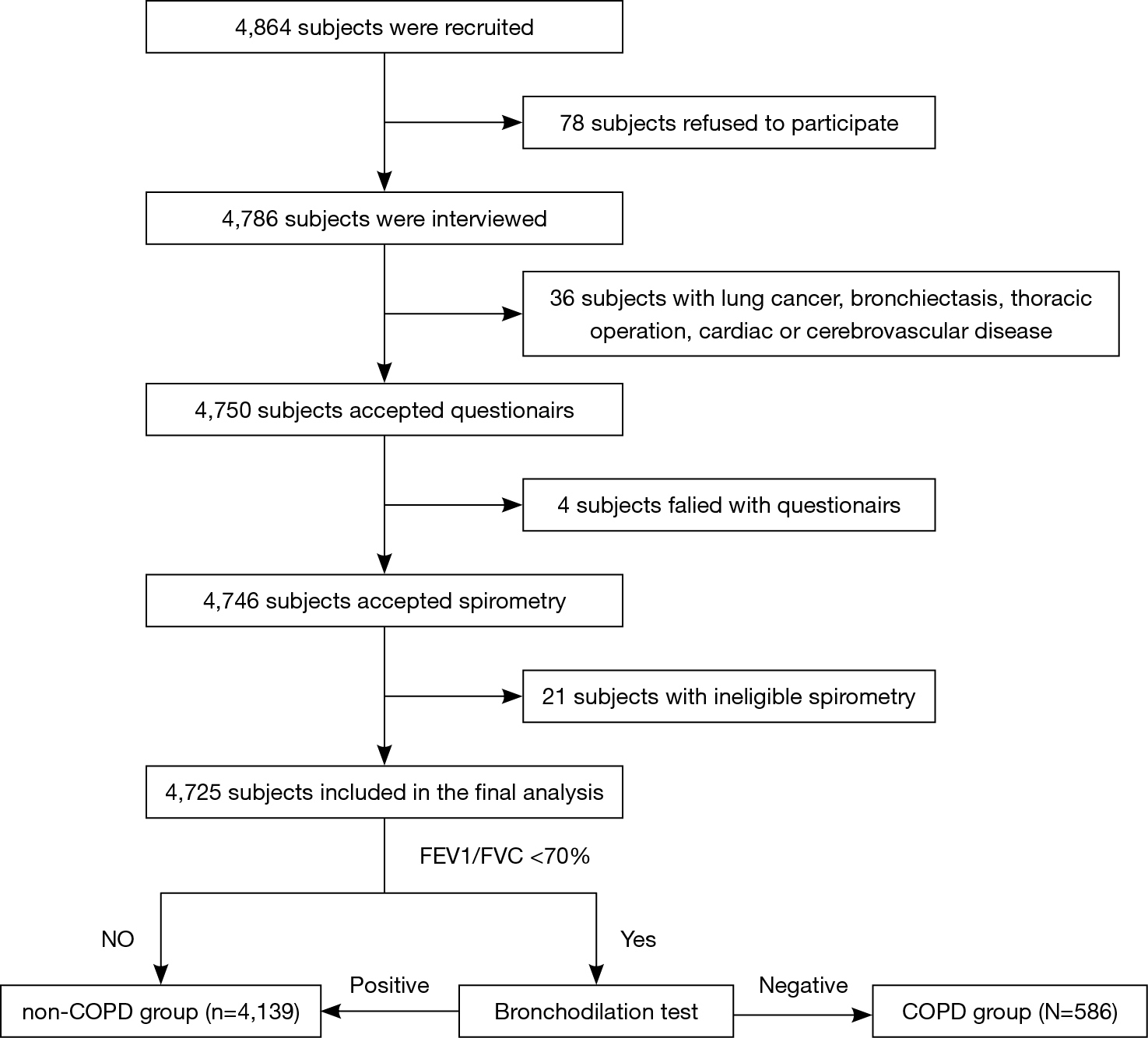 The general characteristics and risk factors are listed in Table 1, and grouped according to their COPD status. The average age of COPD group was significantly older than the non-COPD group (P<0.001), while the COPD group had lower BMI (P<0.001). Smoking history and degree of exposure was similar between the groups, while family history of chronic bronchitis was more common in the COPD group (P<0.001). This group also showed more symptoms of chronic cough and phlegm (P<0.001), along with weaker grip strength (P<0.001). Furthermore, a combination of hypertension (P=0.021) and diabetes (P=0.015) was more common in the COPD group. Hematological analysis revealed higher levels of hemoglobin, hematocrit, mean corpuscular hemoglobin concentration (MCHC), red blood cell count, and serum creatinine in the COPD group (P<0.05). However, the same group exhibited lower mean corpuscular volume (MCV), triglyceride, alanine transaminase (ALT) and urea nitrogen (P<0.05). 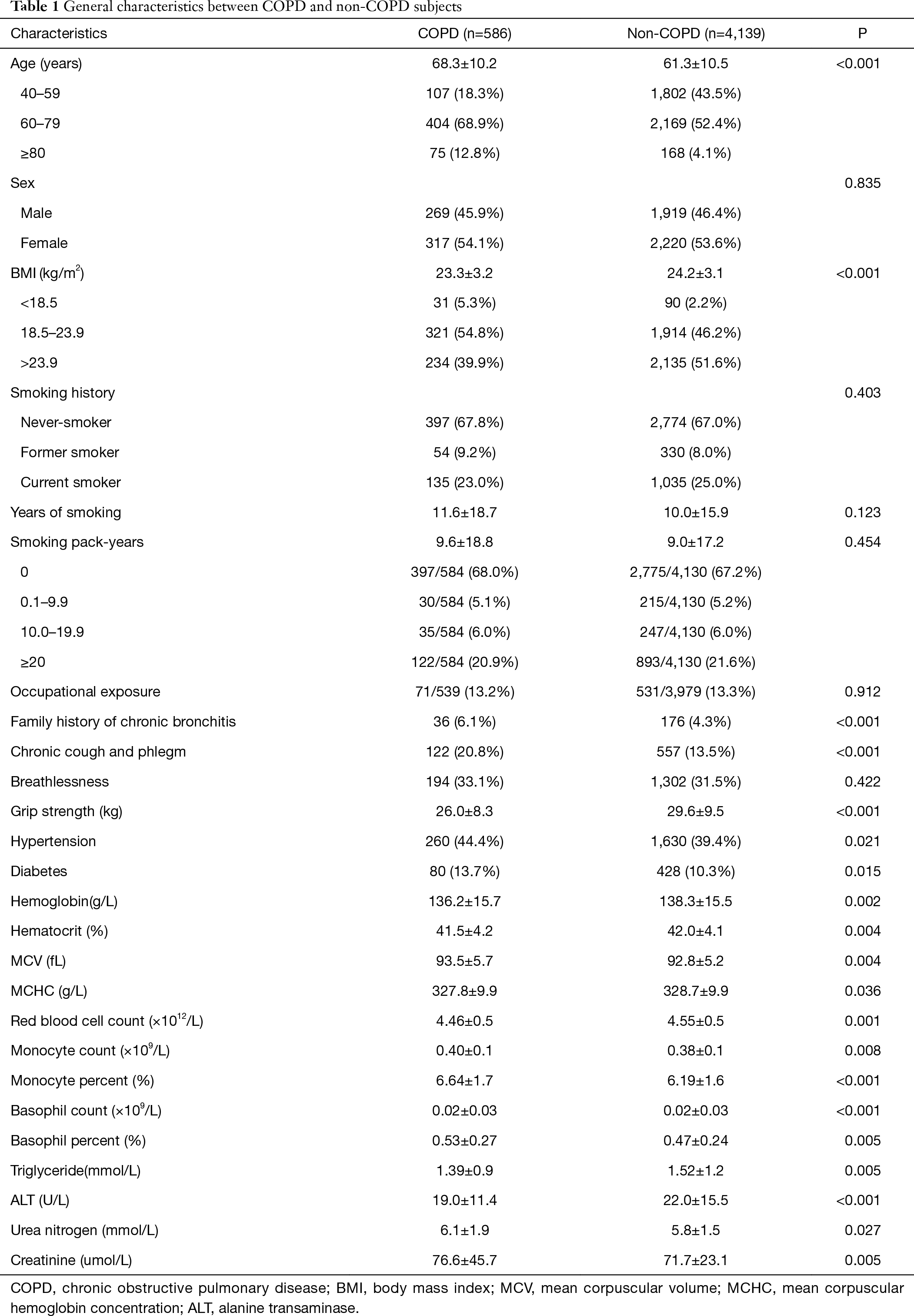 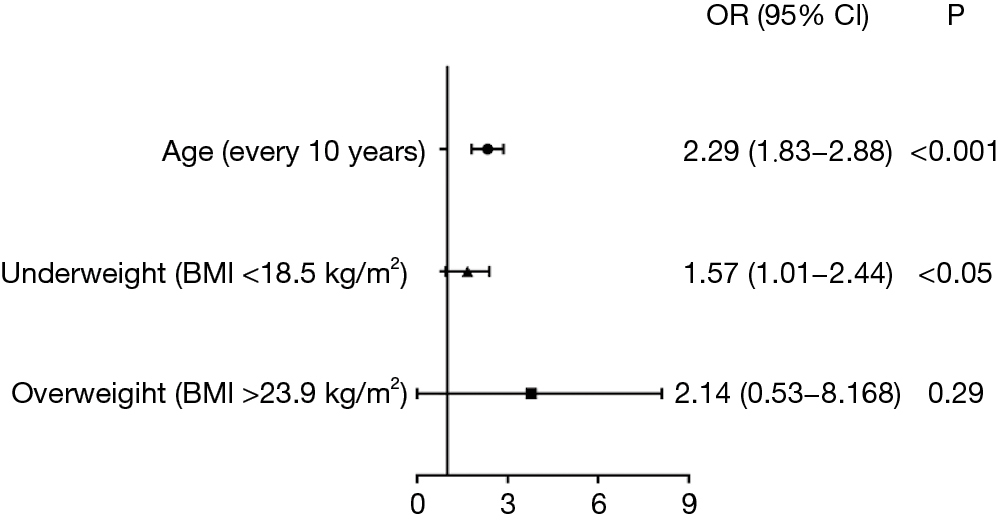 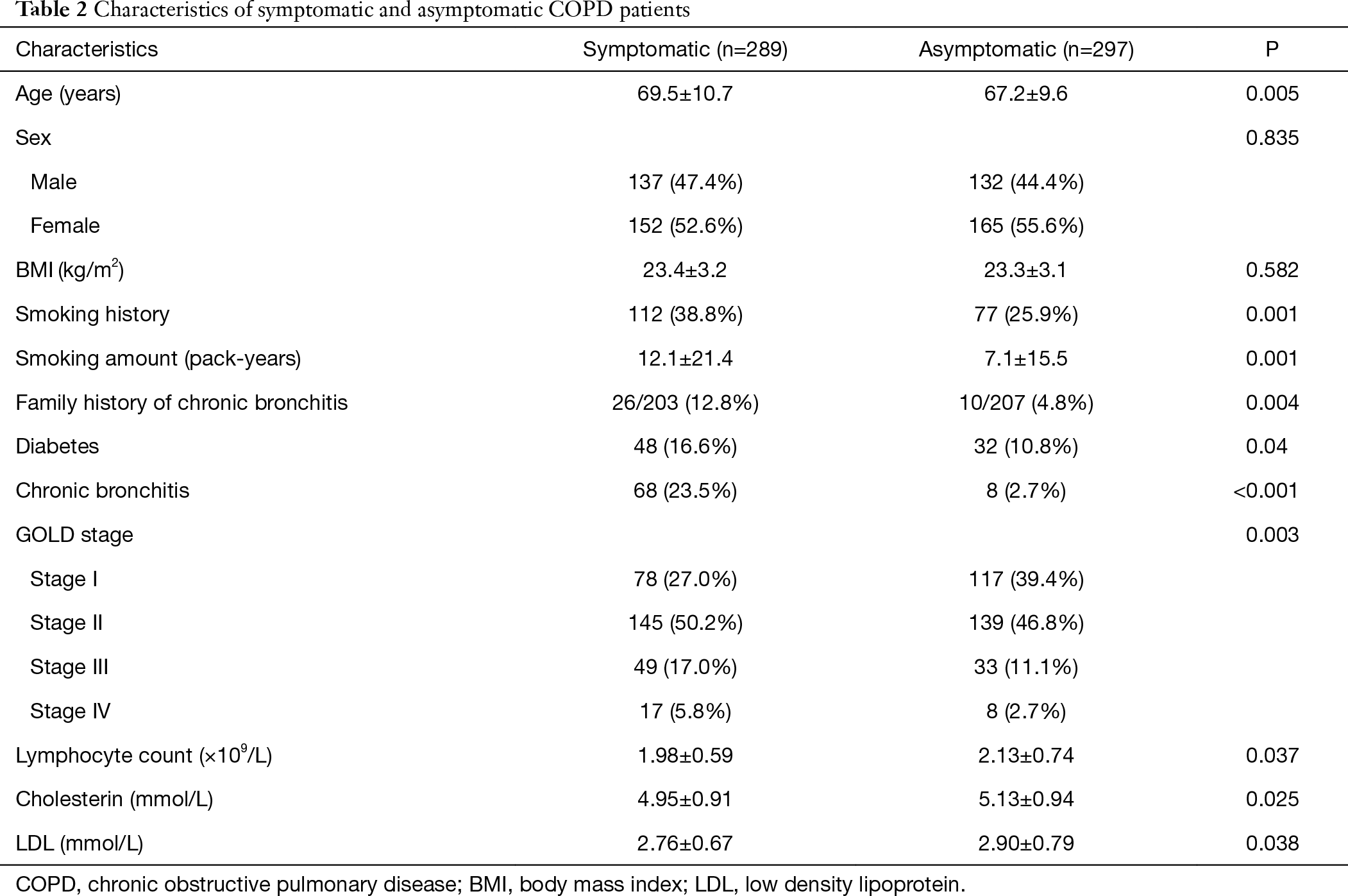 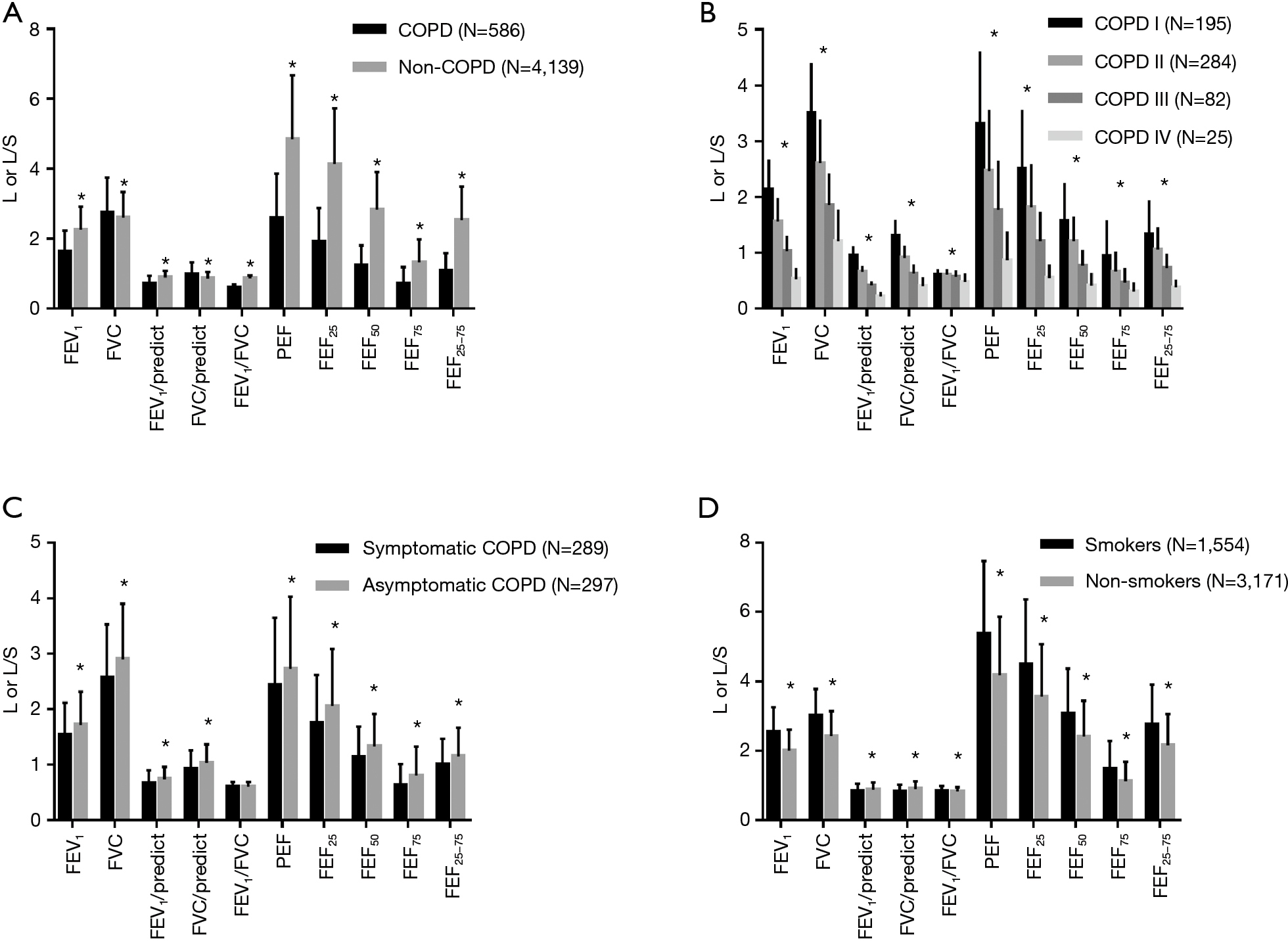 This is the first study which investigated the epidemiology and risk factors of COPD among a population aged 40 years and older in Suzhou. A prevalence of spirometry-diagnosed COPD in this population was 12.4%, and 12.3% in men and 12.5% in women. Age and underweight (BMI <18.5 kg/m2) were independent risk factors of COPD in our study. Approximately half of the COPD patients in Suzhou were asymptomatic, which highlighted the importance of spirometry analysis in health examinations.

Age is often listed as a risk factor of COPD, but it is unclear if this is attributed to increasing age, or if it is an artifact of cumulative exposure of smoke, particulate matter and biomass fuels throughout life (1). In our study, exposure to smoking, occupational and particulate matter were comparative between the COPD group and non-COPD group, demonstrating that age was an independent risk factor for COPD. Additionally, the risk of COPD doubled for every 10 additional years of age among adults 40 years and older. Fletcher-Peto curve and real-life studies indicated that FEV1 decline among COPD patients and healthy people accelerates more in older than in younger individuals (10,11). The age-associated susceptibility to COPD may be attributed to structure changes, such as increases in cellular senescence, stem cell exhaustion, increased oxidative stress, alteration in the extracellular matrix, reduction in endogenous anti-ageing molecules and protective pathways (12).

Low BMI, as a part of the Body-mass index, airflow Obstruction, Dyspnea, and Exercise (BODE) index, was proposed as a possible risk factor of COPD (13) and an independent indicator of poor prognosis (14). In our study, underweight (<18.5 kg/m2) was also regarded as a risk factor for COPD, which increased the morbidity by 1.57 times. To determine if this phenomenon contributed to COPD or was a result of this disease, Zhou and his colleagues (15) conducted a cohort study, which indicated that low BMI was not only a systemic consequence of COPD but also an important risk factor. Improving BMI may be a possible intervention measure to reduce the incidence of COPD, which requires further investigation.

Most studies reported a higher prevalence of COPD in men than in women (3,9). However, a recent study in developing countries has shown a similar prevalence in men and women (16). In our study, 2,188 men and 2,537 women were diagnosed as COPD, with the gender ratio showing no difference between the COPD group and the non-COPD group. In addition, biomass exposure (17,18) and passive smoke (19), which were reported as possible risk factors for COPD in women, were not investigated in this study.

Approximately half of the COPD patients were asymptomatic in our study, despite other reports which suggested that these patients constituted of more than one-third of COPD patients (9,20). Asymptomatic patients in our study were younger, smoked less, and displayed less severe GOLD staging. Although asymptomatic COPD patients did not present with chronic activity-related dyspnea, their cardiopulmonary performance was worse compared to healthy controls (21). In one study, early intervention with tiotropium was found to ameliorated the annual decline of the FEV1 in patients at GOLD stage I or II of COPD (22). Although spirometry is only recommended in patients with symptoms and/or with risk factors by GOLD (1), we advocate spirometry screening for patients aged 40 years and older because of the high percentage of asymptomatic patients and improved outcomes of early treatment.

Spirometry provides the most definitive measure for the diagnosis of COPD. The study showed that FEV1, FVC, FEV1/predict, FVC/predict, FEV1/FVC, PEF, FEF25, FEF50, FEF75 and FEF25-75 were lower in the COPD group than in the non-COPD group. Moreover, these values continued to decrease as the GOLD stage progressed. This may be attributed to the resistance of small airways and the weakened respiratory muscle strength (23,24). Symptomatic COPD patients also displayed lower FEV1, FVC, FEV1/predict, FVC/predict, PEF, FEF25, FEF50, FEF75, and FEF25-75 compared to asymptomatic COPD patients. However, the FEV1/FVC values were similar between the groups. In some COPD patients, respiratory symptoms might precede the development of airflow limitation (25), but in others, it could fall behind the spirometry change by many years (16). Cigarette smoking is the most significant risk factor for COPD, and induces more respiratory symptoms and greater FEV1 decline (1). However, smokers in our study showed higher FEV1, FVC, FEV1/FVC, PEF, FEF25, FEF50, FEF75, and FEF25-75 but lower FEV1/predicted and FVC/predicted than non-smokers. This reflects the larger proportion of male smokers, who have a higher absolute value of FEV1 than female participants. After adjustments were made for age and sex, the values were similar between two groups, which may be related to the following factors: firstly, exposure to passive smoke was not recorded and analyzed; secondly, other risk factors such as genetic factors and indoor air pollution may also influence lung function.

First, typical to most cross-sectional studies, this study could not exclude potential recall bias. Second, the data for passive smoking and atmospheric particle exposure were not acquired, but are reported as important risk factors of COPD. Finally, compared to the lower limit of normal (LLN) criteria, the GOLD criteria (FEV1/FVC <0.7) may over-diagnose about 28% COPD among elders aged 65 and older, but we still chose the GOLD criteria for its efficiency in identifying high risk population.

This cross-sectional study showed that the prevalence of spirometry-diagnosed COPD in Suzhou was 12.4% in populations aged 40 and older according to GOLD criteria. Increasing age and underweight (BMI <18.5 kg/m2) were the main risk factors. Additionally, half the patients were found to be asymptomatic. The study highlighted COPD as a significant public health problem, indicating a need for early detection and prevention.

Funding: This work was supported by the Suzhou Municipal Commission of Health and Family Planning (No. LCX201712).

Conflicts of Interest: All authors have completed the ICMJE uniform disclosure form (available at http://dx.doi.org/10.21037/jtd-20-1616). Dr. XX reports grants from the Suzhou Municiple Commission of Health and Family Planning, during the conduct of the study. The other authors have no conflicts of interest to declare.

Ethical Statement: The authors are accountable for all aspects of the work in ensuring that questions related to the accuracy or integrity of any part of the work are appropriately investigated and resolved. The study was conducted in accordance with the Declaration of Helsinki (as revised in 2013). The study protocol was approved by the ethics review committee of the affiliated Suzhou Hospital of Nanjing Medical University (K2018013) and informed consent was taken from all individual participants.