The influence of thoracic duct ligation on long-term survival of patients with esophageal cancer: a propensity score-matched analysis

The thoracic duct (TD) is part of the lymphatic system and functions to carry chyle. Chyle is a fluid which contains emulsified fats, proteins, sugars, lymphocytes, immunoglobulins, and various enzymes (1). The TD therefore plays a fundamental role in maintaining homeostasis. It is also prone to sustaining damage during thoracic operations for malignancies such as esophagectomy and lobectomy (2,3). Postoperative chylothorax is a rare but serious complication that can occur after esophagectomy, with a reported incidence of up to 10% (4). If left untreated, chylothorax can lead to malnutrition, infection, circulatory failure, and even death (5). Since Lampson reported the first successful case in 1948 (6), ligation of the thoracic duct (LTD) has been used to prevent postoperative chylothorax after esophagectomy.

Previous studies have focused on the reduction of chylothorax as the only clinical goal in LTD, thus overlooking its impact on overall long-term survival (7). In a retrospective study, Hou et al. showed that prophylactic LTD had an unfavorable impact on the overall survival (OS) of patients with esophageal cancer (8). However, there were many confounders in the treatment groups, which may have introduced selection bias and reduced the credibility of the results. Therefore, the impact of LTD on long-term survival warrants further investigation.

To this end, we conducted a retrospective analysis using propensity score matching (PSM) to control for confounding factors between the two groups, and assessed whether LTD could affect long-term survival rates. We present the following article in accordance with the STROBE reporting checklist (available at http://dx.doi.org/10.21037/jtd-20-1341).

A retrospective analysis of 634 consecutive patients with esophageal carcinoma who underwent an esophagectomy between September, 2012, and January, 2014, at Changhai Hospital was conducted. The study was conducted in accordance with the Declaration of Helsinki (as revised in 2013). This study was approved by the Ethics Committee of Changhai Hospital (CHEC-2019-359) and informed consent was taken from all the patients. All patients included in the analysis fit the following criteria: (I) pathologically confirmed esophageal carcinoma or esophagogastric junction carcinoma; (II) tumors were completely resected during esophagectomy (R0 resection); and (III) patients had complete medical records. The exclusion criteria were as follows: (I) a history of previous or concurrent malignancies; or (II) incomplete resection of tumors.

Of the 634 esophageal carcinoma patients who underwent esophagectomy at Changhai Hospital, 609 were included in the analysis. Of the 25 patients excluded from the analysis, 18 had concurrent or previous malignancies and 7 had undergone incomplete resection. All of the patients included in the study were re-staged according to the 8th edition of the American Joint Committee on Cancer (AJCC) classiﬁcation system. Patients were classified into two groups based on their medical records: the thoracic duct ligation group (LG, n=241) and the non-ligation group (NLG, n=368).

Postoperative complications were defined as the occurrence of any surgery-related complications taking place in hospital after surgery, including chylothorax, anastomotic leak, recurrent nerve palsy, and pneumonia. Postoperative chylothorax was defined as triglyceride levels >110 mL/day or by the presence of chylomicrons found in pleural fluid. Conservative treatment or LTD was applied to treat chylothorax according to each patient’s condition. Other complications were diagnosed using the relevant diagnostic criteria.

Follow-up data were collected by contacting patients and their relatives by telephone or by obtaining their medical records. Routine examinations, such as physical examinations, blood chemistry analysis, and computed tomography (CT) scans of the thorax and abdomen were generally performed every 3 months for the ﬁrst 2 years and every 6 months after that for 5 years. After 5 years, the patients were assessed annually. The end of the follow-up period was January, 2019. The median follow-up time was 46 months (range, 1–81 months) for all patients, and the rate of patients lost to follow-up was 13.3%. Patients lost to follow-up were treated as censored data. All-cause mortality was the primary endpoint of this study.

Figure 1 Kaplan-Meier plots depicting the overall survival (OS) rates of the study population. (A) Comparison of OS between the LG and NLG, (B) before and (C) after propensity score matching. Graphs displaying the number of patients at risk at different time points. 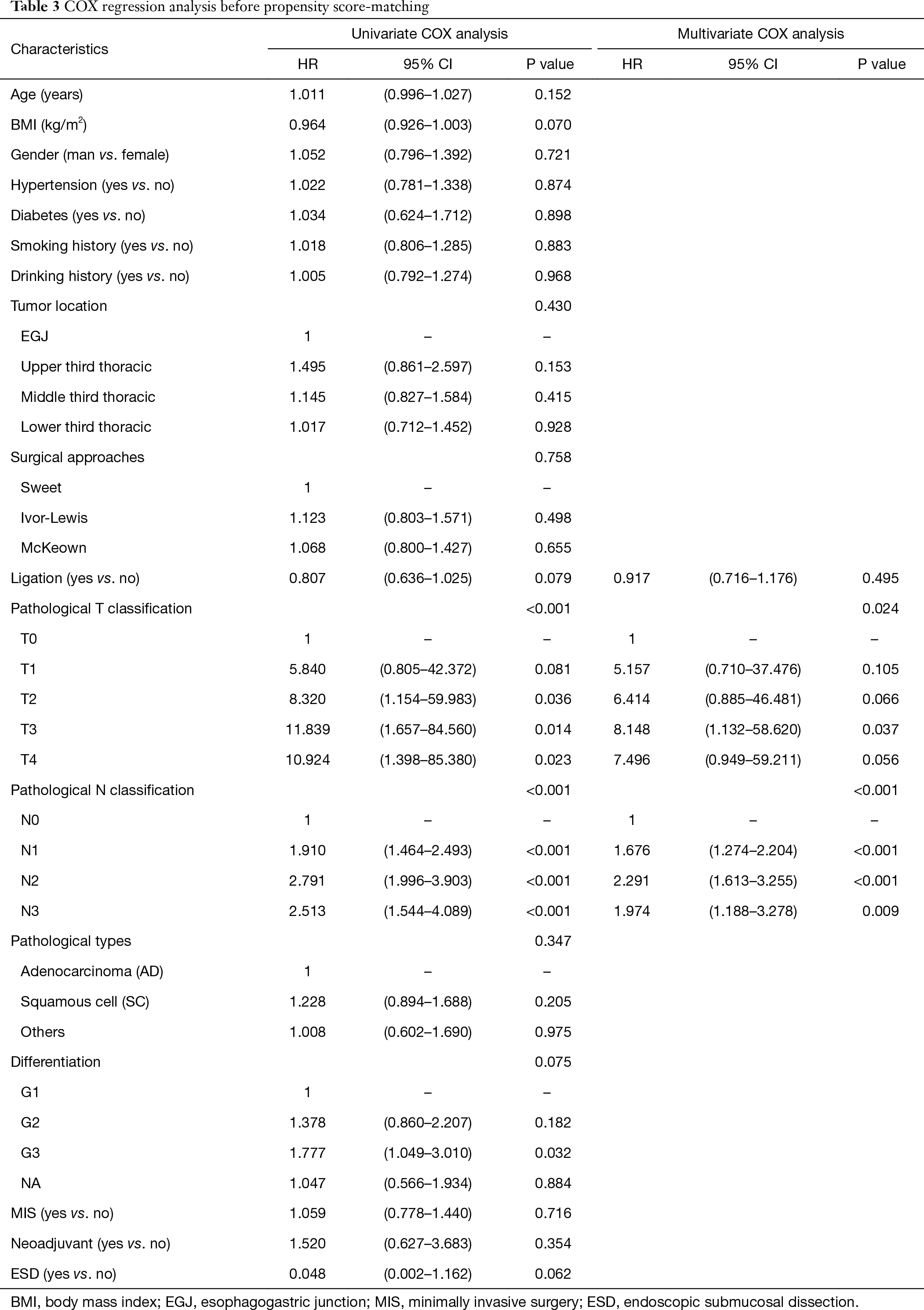 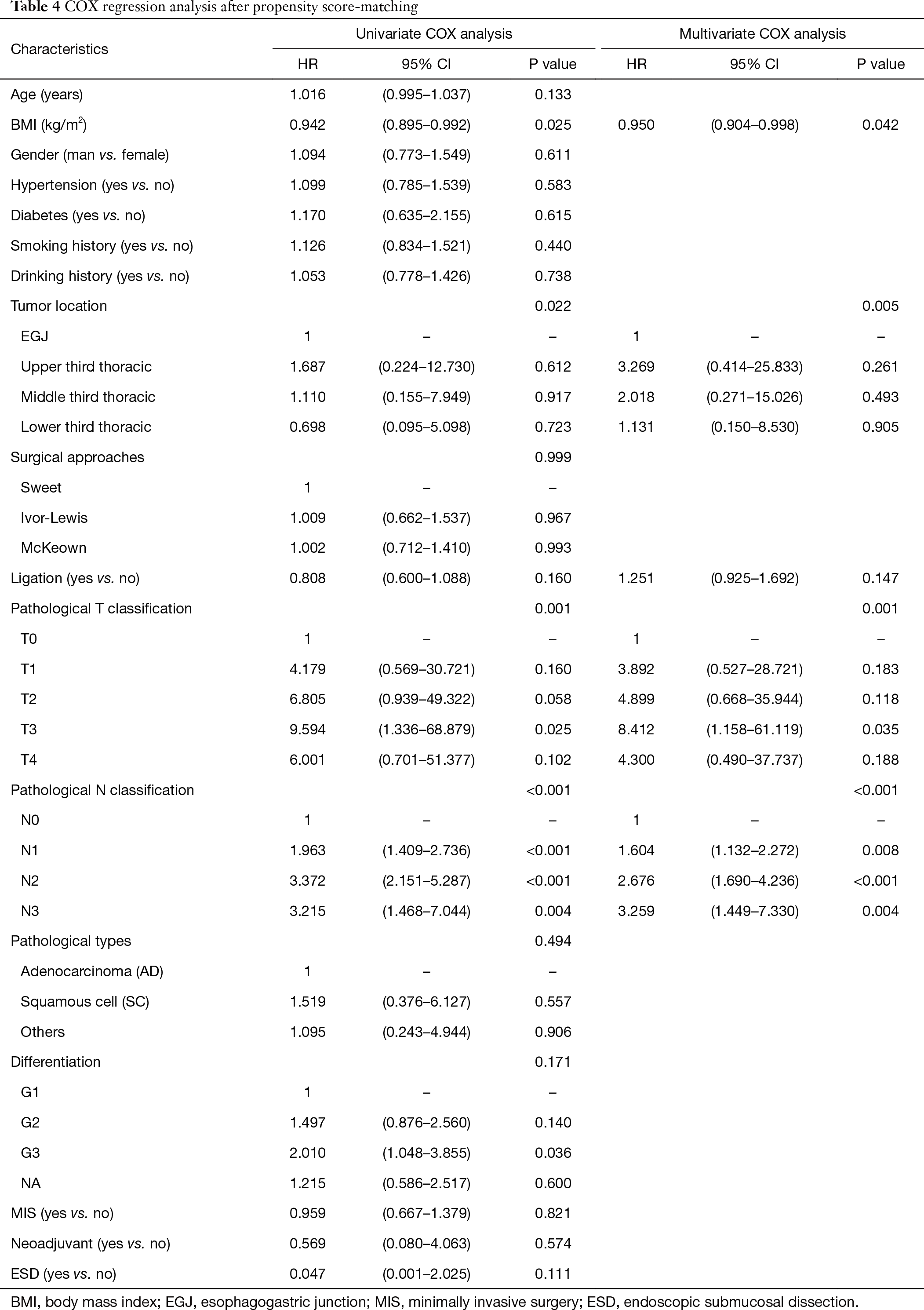 Postoperative chylothorax after esophagectomy is a tremendous burden for patients. Approximately 70% of patients require a second surgical treatment (1), and chylothorax-induced mortality rates can reach as high as 20% (9,10). Since 1948, LTD has been confirmed as an effective approach to treating postoperative chylothorax. To further reduce the occurrence of chylothorax, some surgeons have proposed prophylactic ligation of the thoracic duct (PLTD), where direct or en masse LTD (11) should performed as the routine procedure without considering whether or not the TD is damaged. A recent meta-analysis including 7 clinical studies and 5,254 patients confirmed the utility of PLTD in reducing chylothorax (12). In our study, we performed LTD when intraoperative chylous leakage occurred, or injury to the thoracic duct was highly suspected. Result showed that there was no significant difference in chylothorax incidence between the two groups (1.1% vs. 1.6%; P=1.000). All 3 patients with postoperative chylothorax in the NLG underwent conservative treatment, with a success rate of 100% (3/3), whereas the success rate of conservative treatment in the LG was 50% (1/2). Those may be attributed to the low incidence of postoperative chylothorax (5/609; 0.82%) and small number of enrolled patients. Except for chylothorax, no significant differences between the groups were found for the incidence of complications, which is consistent with a study by Guo et al. (13). Overall, LTD did not increase postoperative complications.

Most of the existing studies emphasize the prevention of postoperative chylothorax, while neglecting other potential consequences of LTD (7). The impact of LTD on long-term survival has yet to be comprehensively understood. Hou et al. compared the survival rates of patients in the LG and NLG, and found that LTD could reduce the OS of patients with esophageal cancer (8). Mechanistically, they attributed the decreased OS in the LG to the loss of immune factors, lipids, and proteins caused by LTD, which warrants further investigation. Growing evidence contradicts these findings. Ehrenhaft et al. (14) reported that blood fat levels dropped significantly after LTD; however, they gradually rose again to baseline levels within 2 weeks. In a study by Liu et al. (15), blood LDL levels gradually recovered within 3 months after decreasing in the first month, while cholesterol, triglycerides, and HDL showed no significant differences between the two groups. In terms of lymphocyte loss, Lee et al. found that lymphocyte counts were significantly reduced after LTD but recovered to normal levels after 3 weeks (16). Taken together, these studies suggest that the metabolic and immunologic changes caused by LTD might be transient. In addition, there was significant heterogeneity between the variables of the LG and NLG in Hou et al.’s study, which might reduce the credibility of the results.

In our study, 1:1 propensity score matching was used to minimize the potential differences between the two groups. We observed that LTD had no obvious influence on OS neither before nor after PSM. Moreover, univariate and multivariate Cox analyses demonstrated that LTD was not a significant prognostic factor, which further validated our primary endpoint findings. Although there were no significant differences between the two groups, Kaplan-Meier plots demonstrated that the 5-year survival rate of the LG was greater than that of the NLG. This could be explained by the fact that the NLG had more patients with pN3 stage and comorbidities, while the LG had more patients with N0–1, G1, and MIS.

In clinical practice, LTD is usually well tolerated due to collateral circulations or the opening of lymphaticovenous communications (17). Although the thoracic duct usually has only one main channel, multiple channels with significant variation can be found in 40% cases (18). In a study by Davis et al. (19), the thoracic ducts of 27.27% patients began in the abdominal cavity as the two channels extended cephalad through the thorax, lying on each side of the aorta, with cross anastomosing channels connecting the two ducts. In addition, there are 3 types of lymphaticovenous communications (LVC) in humans: the central LVC (the termination of thoracic duct), peripheral LVC (communication between lymphatic vessels and veins), and the LVC within lymph nodes (17,20-23). Once the thoracic duct is ligated, the latter two types play a compensatory role in lymphatic return. Peripheral LVCs exist between the lymphatic system and different veins such as the portal vein, the inferior vena cava, the azygos, and the superior vena cava (17). Due to regional obstruction of the lymphatic system, peripheral LVCs were also found in the thigh, leg, and foot (24,25). Located within the paracortex of the lymph nodes are high endothelial venules (HEV), which are specialized vessels that enable direct communication between the lymph and the blood (20). Under pathological conditions, large LVCs within the medulla of lymph nodes may occur once valve incompetency or lymphatic failure takes place (17). Therefore, after LTD, peripheral LVC or lymph node LVC plays a compensatory role in lymphatic circulation.

This study has several limitations. Firstly, the single-center, retrospective nature of this study may have introduced selection bias. Well-designed multi-center randomized controlled trials are needed to validate our results. Secondly, PSM excluded unmatched individuals from the analysis, which reduced the sample size and affected the results. Thirdly, due to difficulty during follow-up, we did not analyze indicators that are reflective of nutritional status.

In conclusion, our study demonstrated that LTD does not increase postoperative complications, and there is no significant correlation between LTD and the prognosis of patients who undergo esophagectomy.

Funding: This work was supported by the National Natural Science Foundation of China (grant number 81472688).

Reporting Checklist: The authors have completed the STROBE reporting checklist. Available at http://dx.doi.org/10.21037/jtd-20-1341

Conflicts of Interest: All authors have completed the ICMJE uniform disclosure form (available at http://dx.doi.org/10.21037/jtd-20-1341). The authors have no conflicts of interest to declare.

Ethical Statement: The authors are accountable for all aspects of the work in ensuring that questions related to the accuracy or integrity of any part of the work are appropriately investigated and resolved. The study was conducted in accordance with the Declaration of Helsinki (as revised in 2013). The study was approved by Ethics Committee of Changhai Hospital (CHEC-2019-359) and informed consent was taken from all the patients.