Stereotactic radiotherapy was developed as a high-precision radiation technique for the treatment of intracranial tumors. In the late 1990s, stereotactic body radiotherapy (SBRT) was made possible because of image-guided radiation delivery techniques and the development of tumor motion management. Accordingly, this therapy has been applied to lung tumors. Currently, SBRT is considered to be an effective and safe treatment in patients with medically inoperable primary lung cancer (1-5), and the number of such treatments is increasing with increase in the number of SBRT-capable facilities. Recent reports have shown that the local control rate was 90% or more over three years in patients with early-stage primary lung cancer undergoing SBRT (1,2). However, the number of cases with cancer recurrence following SBRT resulting in surgical treatment (in cases with no metastasis and medically operable patients) have increased in recent years (6-9).

The present study aimed to retrospectively analyze the safety of salvage surgery in patients with local recurrence following SBRT, evaluating survival outcomes and discussing the current problems associated with this treatment. We present the following article in accordance with the STROBE reporting checklist (available at http://dx.doi.org/10.21037/jtd-20-2253).

This study protocol complied with the Declaration of Helsinki (as revised in 2013). The institutional review board approved this study (approval No. 1909) and waived the requirement for informed consent because the study was a retrospective review.

All subjects were patients with primary lung cancer who underwent surgical treatment for local recurrence following SBRT at eight institutions for the Niigata Chest Surgery Research Group during the period from July 2005 to July 2015. The patients were followed-up by a radiation oncologist and a pulmonologist after SBRT, and if recurrence was suspected, the patients were referred for assessment of the possibility of salvage surgery. Local recurrence was defined as tumor regrowth seen on computed tomography (CT) scans. In addition, positron emission tomography-CT was used for supplementary diagnosis if local recurrence was suspected on CT scans. During recurrence, if the patients had no lymph node or distant metastasis, and were examined to be medically operable, surgical treatment was performed with their written consent.

Each patient underwent blood tests including serum tumor marker tests and radiological examinations. A chest X-ray was performed every 2–3 months, and chest CT scans were performed every six months. Similar to usual lung cancer follow-up, the diagnosis of recurrence was confirmed based on clinical symptoms, radiologic findings, and pathological findings. An observation was censored at the last follow-up visit when the patient had either died without recurrence or was lost to follow-up.

A total of 932 patients underwent SBRT as treatment for primary lung cancer during the period from July 2005 to July 2015 (Figure 1). Before SBRT, 511 (54.8%) patients had histological 87 confirmation, and the remaining 421 patients 88 were clinically diagnosed with primary lung cancer on 89 radiographic imaging. Of these, 81 patients (8.7%) were found to have lung cancer recurrence and 48 patients (5.2%) had local recurrence alone. Nineteen patients (2.0%) underwent salvage surgery, and none of them were evaluated by a thoracic surgeon before SBRT. The characteristics of the patients are shown in Table 1. The reasons for SBRT selection were surgery refusal by eight medically operable patients during initial evaluation, and medically inoperable status of eleven patients as judged by their pulmonologist because they were elderly (n=5), had low pulmonary function (n=3), or had other comorbidities (n=3). Histologically, 15 patients were diagnosed with squamous cell carcinoma and four patients were diagnosed with adenocarcinoma. The patient characteristics at time of surgery are shown in Table 2. The median (range) time period from SBRT to salvage surgery was 17.3 (7.6–58.3) months, the tumor size increased from a median of 23 [12–48] mm at SBRT to 38 [15–55] mm at the time of recurrence. 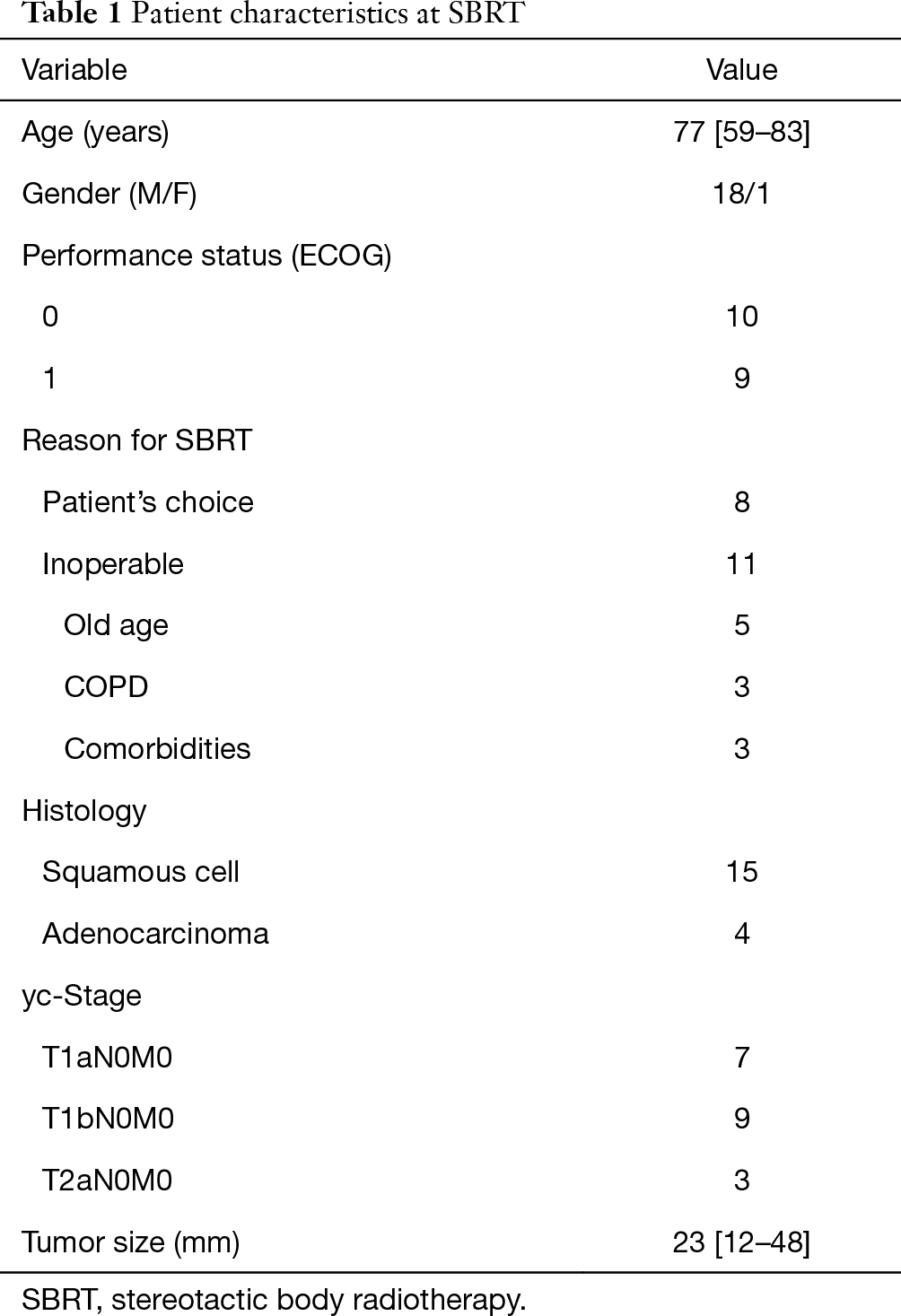 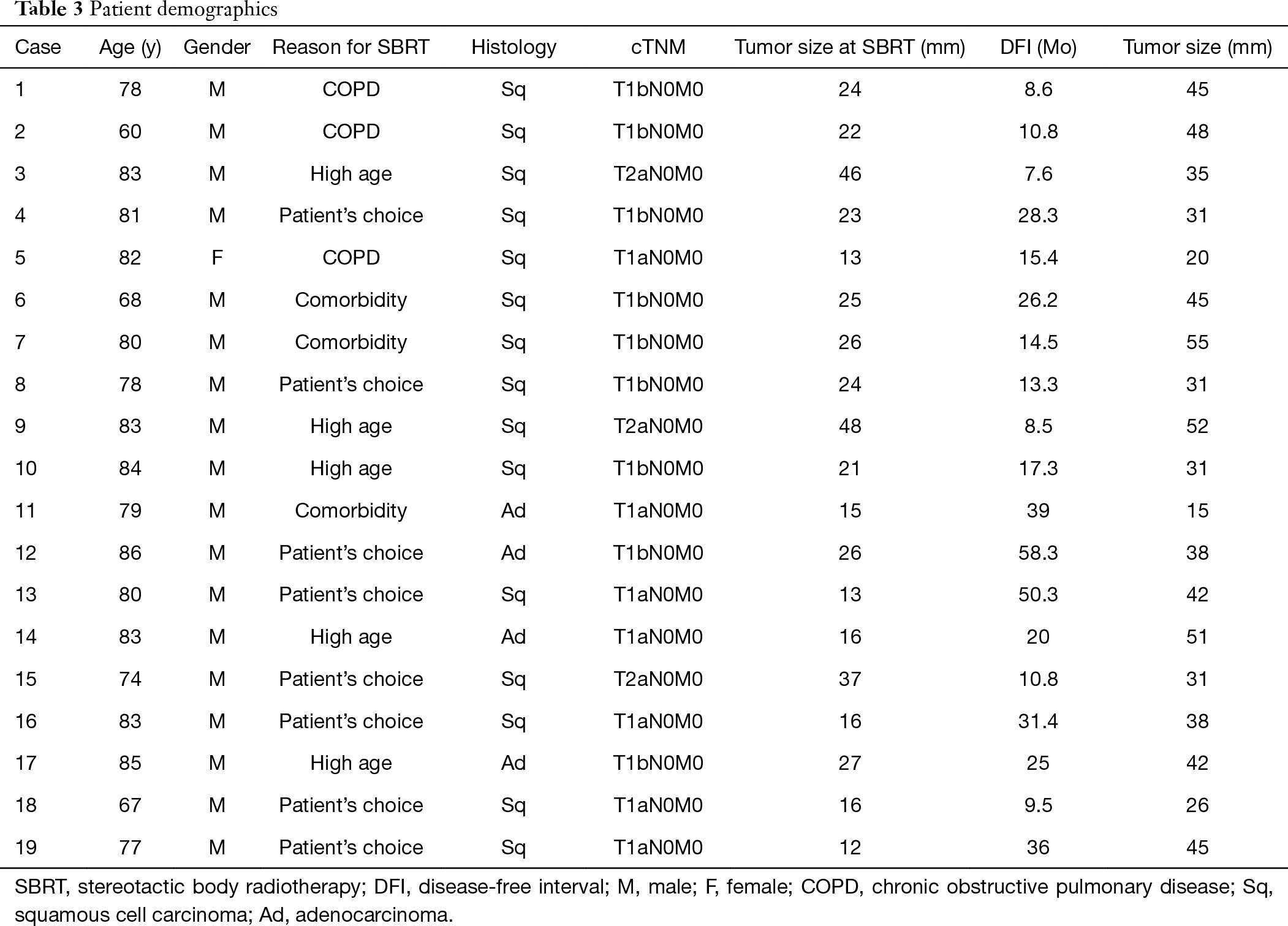 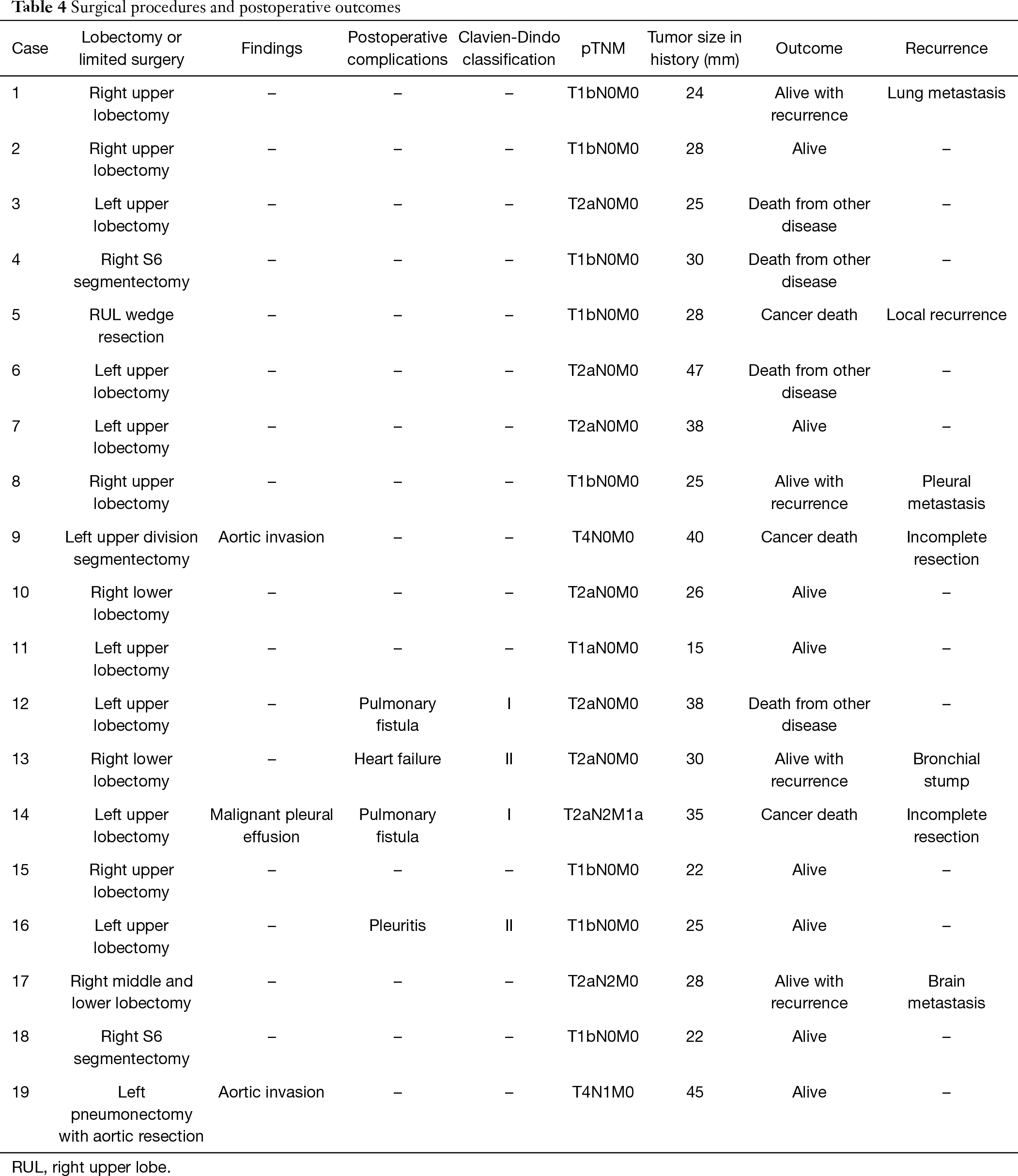 Postoperative complications were documented in 4 patients (21.1%), including prolonged air leak (more than 5 days) in two patients, pleuritis in one, and heart failure in the other. The Clavien-Dindo scores were I or II in all 4 patients. 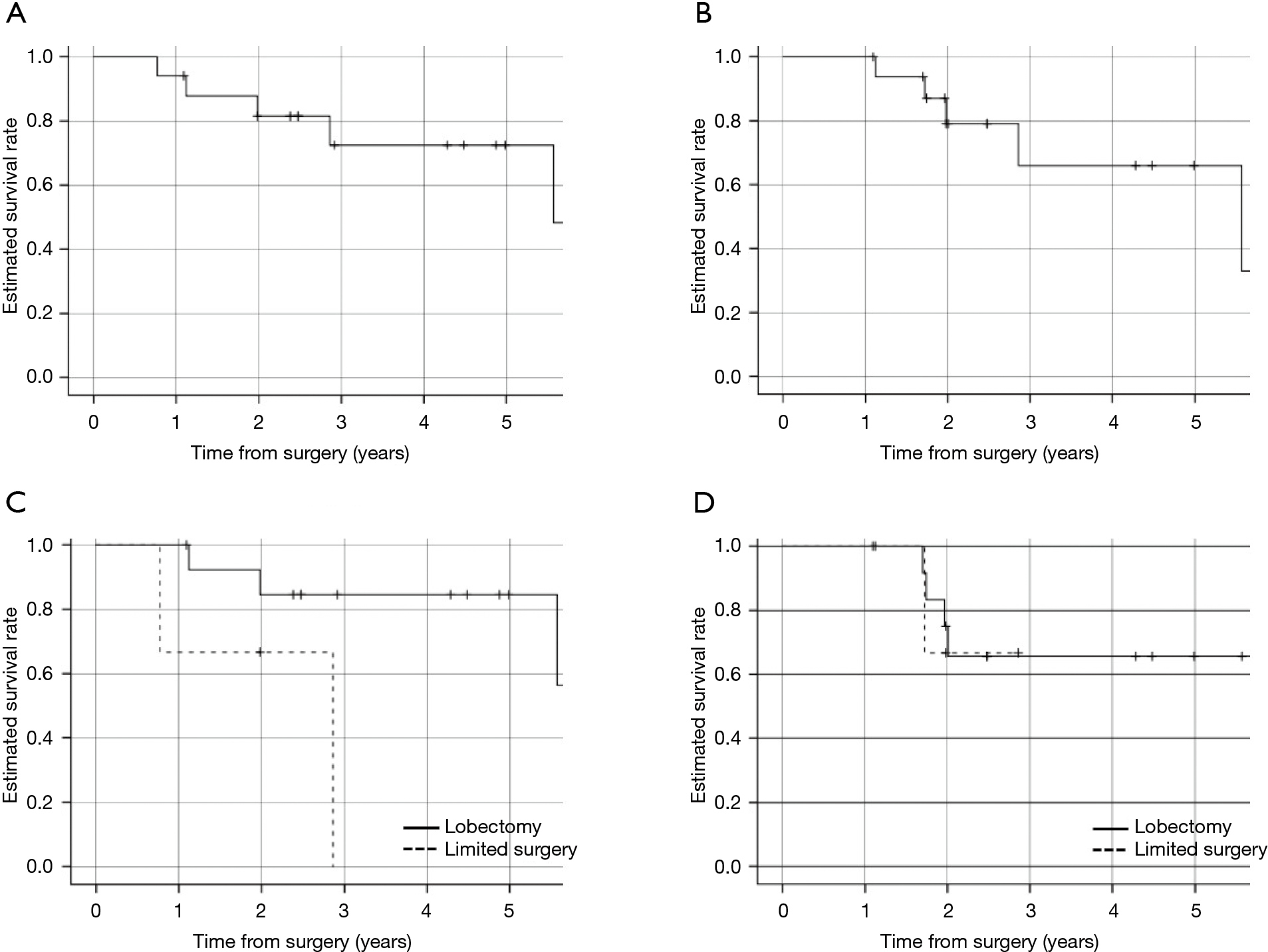 Of the four patients who survived with recurrence, two underwent a second SBRT. One of these patients had isolated pleural nodule recurrence, and the other had bronchial stump recurrence. The third patient had isolated contralateral lung metastasis recurrence, resulting in lung resection. The fourth patient who survived with recurrence experienced brain metastasis, had an epidermal growth factor receptor (EGFR) mutation, and received EGFR-tyrosine kinase inhibitor therapy. Three patients died from lung cancer recurrence; one patient underwent wedge resection, one had lymph node metastasis, and the other one underwent incomplete resection because of a descending aortic invasion.

As previously demonstrated, SBRT therapy results in high local cancer control rates and low toxicity in medically inoperable patients with early stage, non-small cell lung cancer (1-5). However, the definition of “medically inoperable” differs based on facilities and research, and no clear criteria have been outlined. In the present study, 19 patients underwent salvage surgery to treat local recurrence following SBRT. Of these, 11 were diagnosed to be medically inoperable by a pulmonologist (no thoracic surgeon made diagnoses in this regard). To objectively determine the status of medical operability, careful consideration by a multidisciplinary tumor board is required (6).

The current standard treatment for stage I primary lung cancer is lobectomy and mediastinal lymph node dissection. Surgical treatment for lung cancer has a perioperative mortality of 0.7–1.4% and has been established as the treatment of choice (13-15). In addition to a high local control rate, SBRT is associated with no serious complications and very few cases of treatment-related death (<0.0–0.7%), and is recognized as a minimally invasive treatment (12,13). Therefore, SBRT may be selected in the absence of careful consideration or because of patient refusal to undergo surgery. In recent years, the number of reports regarding SBRT to treat medically operable patients with lung cancer has been increasing (12,16). However, few reports have shown successful outcomes of SBRT over more than three years, whereas others have reported insufficient long-term outcomes; therefore, SBRT has not been used as a definitive treatment (17) and cannot be used as a standard of care in medically operable patients with lung cancer.

Before the introduction of SBRT, limited surgery was often selected for treatment in high-risk patients with comorbidities or poor pulmonary function. Limited surgery has a minimal effect on pulmonary function, and if a sufficient margin (≥1 cm) of the tumor diameter can be secured, it is considered safe and effective (18). Ginsberg et al. (19) reported that the locoregional recurrence rate after wedge resection was three-fold higher than lobectomy, with poor prognosis. In addition, Crabtree et al. (13) compared local recurrence after surgery with that after SBRT, demonstrating that SBRT was associated with higher local recurrence rates. Further, Yerokun et al. (20) compared the OS after limited surgery with SBRT, and revealed that SBRT was associated with a significantly poorer prognosis; this tendency was more pronounced in elderly patients or those with comorbidities. Because SBRT may be selected in the absence of careful consideration, lobectomy and mediastinal lymph node dissection should be performed in medically operable patients.

Some reports have stated that local recurrence during follow-up after SBRT defined as continuous increase of the tumor in size or increase FDG avidity (6-8). But, one of the issues with recurrent lung cancer after SBRT is the difficulty to correctly diagnose recurrence based on imaging. Fibrotic changes often develop after SBRT and tumor shadow becomes indistinguishable from the fibrotic shadow (21). Ogawa et al. (22) reported positive FDG-PET (SUVmax ≥5) finding does not necessarily indicate tumor recurrence because they experienced a number of false positive cases. It has been reported that late fibrotic changes or mass-like fibrosis can occur over more than two years and is considered to be a normal change following SBRT (9,23), possible delaying the recurrence diagnosis. Therefore there are no criteria to diagnose recurrence after SBRT in primary lung cancer. We defined local recurrence after SBRT as continuous increase of the tumor in size. Further, we found that the increase in tumor size ranged from 23 [12–48] to 38 [15–55] mm. And, we defined the time period from SBRT to salvage surgery as from the start of SBRT to the date of salvage surgery. We found the time period from SBRT to salvage surgery ranges 17.3 (7.6–58.3) months. This result was similar to previous report (range between 10 and 17 months) (6-8). Careful follow-up is important to detect disease progression and to implement timely intervention.

The 5-year OS rate of 72.5% found in the present study was lower than that of 79.5% in the report by Hamaji et al. (9). The reason was thought to be that there are some cases of death from other diseases in the present study, but this comparison is unconfirmed due to the small number of cases analyzed.

The primary limitations of the present study include its retrospective design and small sample size. However, considering available literature regarding local recurrence after SBRT in patients with primary lung cancer, the sample size of 19 patients used here is the largest reported to-date. Further, there was no pathology diagnosis before SBRT in 42.5% of the cases, which may have contributed to low local recurrence rate following SBRT.

We evaluated patients who underwent salvage surgery to treat local recurrence of lung cancer following SBRT. Salvage surgery could be performed safely without affecting SBRT outcomes. In cases of complete resection, salvage surgery can lead to good long-term prognosis. Our evaluation suggested that SBRT was selected in medically operable patients without careful consideration. The standard treatment for patients with stage I NSCLC is lobectomy and mediastinal lymph node dissection. To provide optimal assessment and treatment, careful consideration by a multidisciplinary tumor board is required. Because of the recurrence rate following SBRT, unknown long-term outcomes, and stage progression during recurrence, we recommend that cursory SBRT selection should be avoided.

Reporting Checklist: The authors have completed the STROBE reporting checklist. Available at http://dx.doi.org/10.21037/jtd-20-2253

Conflicts of Interest: All authors have completed the ICMJE uniform disclosure form (Available at http://dx.doi.org/10.21037/jtd-20-2253). The authors have no conflicts of interest to declare.

Ethics Statement: The authors are accountable for all aspects of the work in ensuring that questions related to the accuracy or integrity of any part of the work are appropriately investigated and resolved. This study protocol complied with the Declaration of Helsinki (as revised in 2013) and was approved by the institutional review board at Nishi-Niigata Chuo National Hospital (approval No.1909). The requirement for informed consent was waived because all data in this study were completely anonymized.