Pulmonary artery hypertension (PAH) is a rare and life-threatening disease in pregnant women characterized by progressive increases in pulmonary artery pressure (PAP), pulmonary vascular resistance (PVR), inflammatory cell infiltration, vascular remodeling and occlusion of vessels with thrombi, which eventually lead to right ventricular failure, pulmonary hypertension crisis (PHC) and death (1,2). A previous systematic review from 1978 to 1996 (3) showed that the mortality rate of pregnant women with PAH is 30–56%, and recent data have indicated that the outcomes of pregnant women with PAH have improved with pharmacological therapy and a multidisciplinary approach (4-8).

It is generally believed that hemodynamic fluctuations caused by an increase in recurrent blood volume and decreased systemic vascular resistance (SVR), which occur during pregnancy and delivery, are the main causes of the high mortality rate of pregnant PAH patients (6,9). In recent years, as comprehensive clinical management has improved, hemodynamic fluctuations observed in pregnant PAH patients have been relatively small, and reports of death during pregnancy and delivery have become increasingly rare (10). Most death of pregnant women with PAH occur within 1 month after delivery (11). More than half of the deaths in pregnant women with severe PAH occur within 1 week after delivery due to PHC caused by significantly increased PAP (12). Thus, the incidence of death after delivery, especially within 1 week after delivery, is high; however, this is inconsistent with clinicians’ previous understanding of the development of this disease. Clinical data have shown that PAP increases in most patients who die within 1 week after delivery, especially patients with severe PAH or idiopathic PAH (IPAH) (13,14). Theoretically, the circulatory system gradually stabilizes during this period, but PAP further increases. However, the specific causes of this further increase in PAP remain unknown. The exact changes of pulmonary circulation, which is the precondition to prevent further increases in PAP after delivery, have not yet been widely studied. Thus, this experiment mainly examined postpartum pulmonary circulation in a pregnant rat model of monocrotaline (MCT)-induced PAH to explore the cause of this further increase in PAP.

We present the following article in accordance with the ARRIVE reporting checklist (available at http://dx.doi.org/10.21037/jtd-20-1966).

Six-week-old Sprague-Dawley (SD) rats [certificate number SYXK (Jing) 2016-0027] with a body weight of 150–175 g obtained from the Animal Resource Centre of Beijing Anzhen Hospital (Beijing, China) were included in this study. The rats were housed under a 12-h light/12-h dark cycle at 50–60% humidity and 20–22 °C, and food and water were provided ad libitum. All experiments were approved by the Institutional Animal Care and Use Committee (Beijing Anzhen Hospital, Capital Medical University, Beijing, China) and conducted in accordance with the Guide for the Care and Use of Laboratory Animals published by the National Institutes of Health.

General condition information, hemodynamic data and pulmonary tissues were collected from pregnant rats from the two groups on the 18th day after successful mating (T1), the 1st day after delivery (T2), the 3rd day after delivery (T3), and the 7th day after delivery (T4). The rats did not survive and continue their pregnancies after data collection. The rats from each group were numbered, and data collection time points were determined by drawing lots. The inclusion criterion was pregnancy within one week of the mating period. The exclusion criteria were as follows: no pregnancy within one week of the mating period and incomplete data collection caused by death or failure of the experimental operation. The timeline of the animal study is shown in Figure 1.

Figure 1 Timeline of the animal study. The female rats in the monocrotaline (MCT)-treated pregnant group were injected with MCT (40 mg/kg) at the age of 7 weeks. The female rats in the pregnant group were injected with the same volume of 0.9% saline at the same age. Rats from both groups were mated at the age of 9 weeks. General condition information, hemodynamic data and pulmonary tissues were collected from pregnant rats from the two groups on the 18th day after successful mating (T1) and the 1st (T2), 3rd (T3), and 7th days after delivery (T4).

PAH was induced in rats from the MCT-treated pregnant group at the age of 7 weeks by a subcutaneous injection of MCT (40 mg/kg) into the neck. MCT was dissolved in 1 M HCl, and the pH was adjusted to 7.4 with 1 M NaOH.

Rats from both groups were mated at the age of 9 weeks. One male rat was placed in a cage with 2–3 female rats for 12 hours every night. Copulation was conﬁrmed next morning by the presence of a copulation plug or spermatozoa in the vaginal smear. The day on which successful mating occurred was recorded. An enlarged abdomen on the 18th day after successful mating and the delivery of fetal mice were used as markers of pregnancy.

Rats that met the experimental criteria were anesthetized with 3% pentobarbital (2–3 mL/kg, subcutaneously) and tracheally intubated for hemodynamic measurements. Mechanical ventilation (ALC-V8; Alcott Biotech Co., Ltd., Shanghai, China) was performed with a tidal volume of 7 mL/kg and a respiratory rate of 50 breaths/min.

The animals were sacrificed by injection of a high-potassium solution after hemodynamic measurement, and their lung tissues were harvested after thoracotomy for further analysis. The inferior lobes of the right lungs were extracted and then fixed in 4% paraformaldehyde. The pulmonary lobes were embedded in paraffin, cut into 5-µm-thick sections and stained with hematoxylin and eosin (HE; ZLI-9615; ZSGB-BIO, Beijing, China). Paraffin-embedded sections were also stained with a Masson’s Trichrome Stain Kit (Beijing Solarbio Science & Technology Co., Ltd., Beijing, China) in accordance with the manufacturer’s instructions. Ten to twenty pulmonary arteries per rat were studied microscopically (Eclipse 90i Microscope, Nikon, Japan) and analyzed (DS-Ri1-U3 digital camera, Nikon, Japan; Image-Pro Plus 6.0 software, Media Cybernetics, Washington, Rockville, USA) to evaluate pulmonary remodeling. The relative medial thickness of the pulmonary arteries was measured as follows: (ED – ID)/ED ×100% (ED, external diameter; ID, internal diameter). The pulmonary artery density was calculated by determining the number of small and medium pulmonary arteries (diameter: 50–200 um) per mm2 in an average of 10 fields/rat. The nonthickened and occluded pulmonary artery densities were also analyzed. All of these morphometric studies were conducted in a blinded manner.

Harvest the heart by cutting at the root of the aorta. And then dissect the heart to separate the right ventricle (RV) free wall from the left ventricle (LV) and septum (S). Weigh the RV and LV + septum (LV + S) to calculate a Fulton index (RV/LV + S), which quantifies the degree of RV hypertrophy.

The values are expressed as the mean ± SD. The significance of the differences was calculated by one-way ANOVA and the chi-square test using the SPSS 23.0 statistical package. A P value <0.05 was considered significant.

General condition of the rats

A total of 258 female and 80 male SD rats were included in this study. Male rats were used only for mating.

Eighty-eight female rats were assigned to the pregnant group and were mated. Sixty of the rats successfully became pregnant, yielding a pregnancy rate of 68.2%. There was no significant change in the general condition of these rats, and none of the rats died.

None of the data for either group were lost due to failure of the experimental operation. Sixty rats from each group, including 15 rats at each time point, were included in the data analysis. 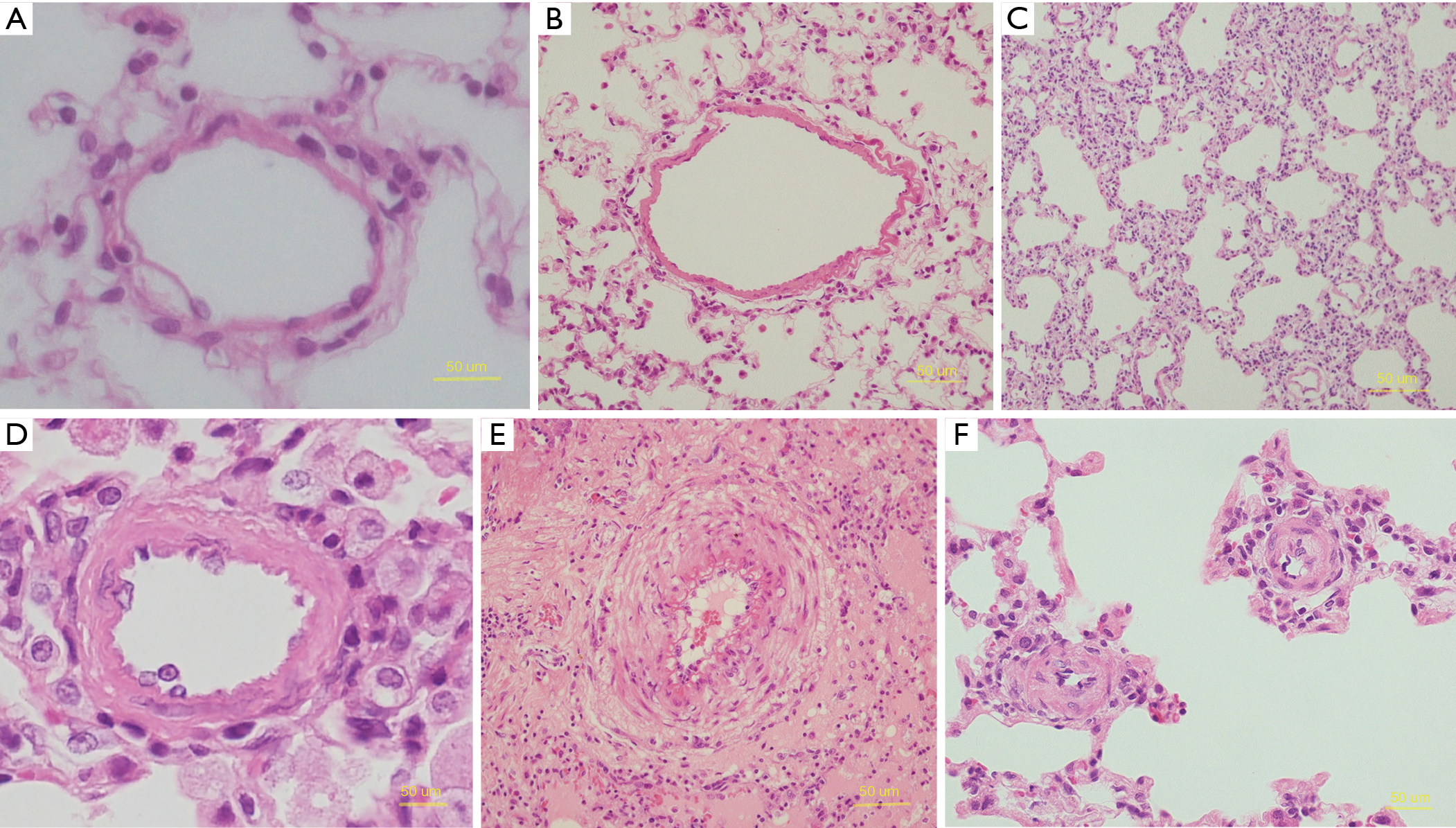 Rat model of PAH in pregnancy

At present, there are several models of PAH that accurately simulate human disease (15,16), but there have been no studies on animal models of PAH in pregnancy (17). The MCT-induced PAH rat model is a classical animal model that mimics several key aspects of human PAH, including vascular remodeling, smooth muscle cell proliferation, endothelial dysfunction, inflammatory cytokine upregulation, and right ventricle failure and requires only a single drug injection (18-20). It also precisely simulates the pathophysiological changes that occur in IPAH (21), which is the most severe type of PAH in pregnancy patients and causes the highest mortality (13,22). We established a new animal model—a pregnant rat model of MCT-induced PAH—based on this model.

MCT (30–80 mg/kg) is commonly used to generate experimental models of PAH in rats. The dose required to induce PAH in rats in unclear, but most studies have used 60 mg/kg (23-25). However, our preliminary experiments showed that rats injected with 60 mg/kg MCT showed much higher mPAP and mortality than rats injected with 40 mg/kg MCT. Therefore, we finally chose this low dose of MCT (40 mg/kg) to induce PAH in rats to ensure that most rats were able to tolerate pregnancy and survive postpartum (26).

The pregnancy rate of the MCT-treated pregnant group (51.6%) was lower than that of the pregnant group (68.2%), which suggested that PAH reduced the ability of rats to become pregnant 2 weeks after MCT injection. The mortality rate of pregnant rats with PAH was 25.9%, and none of the rats died during delivery. Most deaths occurred between 1 and 3 days after delivery. These observations are consistent with clinical findings (28). We believe that the main cause of death of the rats was multiple organ failure (MOF) caused by the significantly increased PAP after delivery. All of these results further demonstrate that this model can accurately simulate the clinical situation.

In addition to the MCT-induced significant differences between the two groups, other differences were also observed after delivery. As the gestation period of SD rats is approximately 18 days, T1, which was the 18th day after successful mating, was the prenatal period.

PAP increased significantly in pregnant rats with PAH after delivery. Although this result seems to be consistent with clinical findings, there are differences. The main difference is that the rats in this experiment were not treated. Most patients receive different degrees of intervention treatment during the perinatal period, and the PAP of many surviving patients does not necessarily continue to increase after delivery. According to our clinical experience, the outcomes of patients who experience further increases in PAP after delivery may not be favorable; however, outcomes are better in patients who do not experience further increases in PAP (11,33).

The authors would like to thank Professor Mu Jin for excellent technical support and Professor Jiakai Lu for critically reviewing the manuscript.

Reporting Checklist: The authors have completed the ARRIVE reporting checklist. Available at http://dx.doi.org/10.21037/jtd-20-1966

Conflicts of Interest: All authors have completed the ICMJE uniform disclosure form (available at http://dx.doi.org/10.21037/jtd-20-1966). The authors have no conflicts of interest to declare.

Ethical Statement: The authors are accountable for all aspects of the work in ensuring that questions related to the accuracy or integrity of any part of the work are appropriately investigated and resolved. All experiments were approved by the Institutional Animal Care and Use Committee (Beijing Anzhen Hospital, Capital Medical University, Beijing, China) and conducted in accordance with the Guide for the Care and Use of Laboratory Animals published by the National Institutes of Health.