Median sternotomy has become the preferred incision for open cardiac procedures since its description by Julian and colleagues in 1957 (1). Deep sternal wound infection (DSWI) is a serious postoperative complication of surgical procedures using this technique. DSWI has an incidence of 0.1–3.7%, and if it is improperly managed, the mortality rate can reach as high as 47% (2-5).

Traditional treatment methods for DSWI include open wet dressing, occlusive continuous irrigation, and vacuum-assisted closure. However, while these methods are effective to some extent, they often fail to cure patients (6).

Recently, full debridement followed by filling the sternal defects with autologous viable tissue with a good blood supply has been considered to be the most effective method for treating DSWI. Therefore, muscle flaps such as the latissimus dorsi myocutaneous flap (LDMF), rectus abdominis myocutaneous flap (RAMF), and pectoralis major myocutaneous muscle flap (PMMF) are widely used and have proven effectiveness. Of these flaps, PMMF is deemed to be the most suitable for DSWI treatment, mainly because it is positioned close to the filling site and can be easily prepared. At present, two PMMFs are used: advancement flaps and turnover flaps. Advancement flaps can cover the upper two-thirds of the sternum. With advancement flaps, the function of upper limbs and chest shape can be preserved well without the need to disinsert the pectoralis major muscle from the humerus. However, advancement flaps cannot cover the lower sternum or fully fill mediastinal dead space; moreover, the filling effect is worse than that with turnover flaps. In contrast to advancement flaps, turnover flaps can make the mediastinum dead space get satisfactory filling, reduce the postoperative wound complications. However, the procedure of making turnover flaps requires disinsertion of the muscle from the humerus, resulting in functional loss and cosmetic deformity. Therefore, in the treatment of patients with small sternal defects, advancement flaps are mainly used. For patients treated with turnover flaps, postoperative complications and adverse effects on upper limb strength and chest shape appear to be inevitable.

We combined the advantages and disadvantages of these two pectoralis major muscle flaps to develop a novel method using bilateral partial pectoralis major muscle turnover muscle flaps for the treatment of DSWI. This study describes this method and reports its preliminary clinical results. We present the following article in accordance with the STROBE reporting checklist (available at http://dx.doi.org/10.21037/jtd-20-2845).

Between January 2019 and December 2019, 11 patients with DSWI following cardiac surgery underwent full debridement and filling the dead space with bilateral partial pectoralis major muscle turnover flaps in the Department of Cardiac Surgery at Affiliated Union Hospital of Fujian Medical University. This surgical procedure was approved by the hospital ethics committee (No. 2020KY0100), and signed consent forms were obtained from the patients or their family members.

The 11 patients (8 males and 3 females) had a mean age of 50.9 years. The patients’ primary cardiac operations included aortic dissection (n=3), valve replacement (n=3), ascending aortic aneurysm (n=1), post-coronary artery bypass grafting (post-CABG; n=1), repair of atrial septal defect (n=1), and valvuloplasty (n=1). The patients’ preoperative comorbidities included pulmonary infection (n=8), hypertension (n=5), diabetes mellitus (n=2), and hypoproteinemia (n=1). The mean interval between the primary cardiac operations and the diagnosis of DSWI was 3.6±4.2 years, and the mean interval from the diagnosis of DSWI to flap surgery was 2.8±1.5 days. The average follow-up period after flap surgery was 6 months (Table 1). According to the Pairolero and Amold classification (7), at the time of presentation, 1 patient had a type II wound and 10 patients had type III wounds. Surgical debridement was performed before flap surgery in two patients, while the rest of the patients underwent debridement and flap surgery simultaneously. 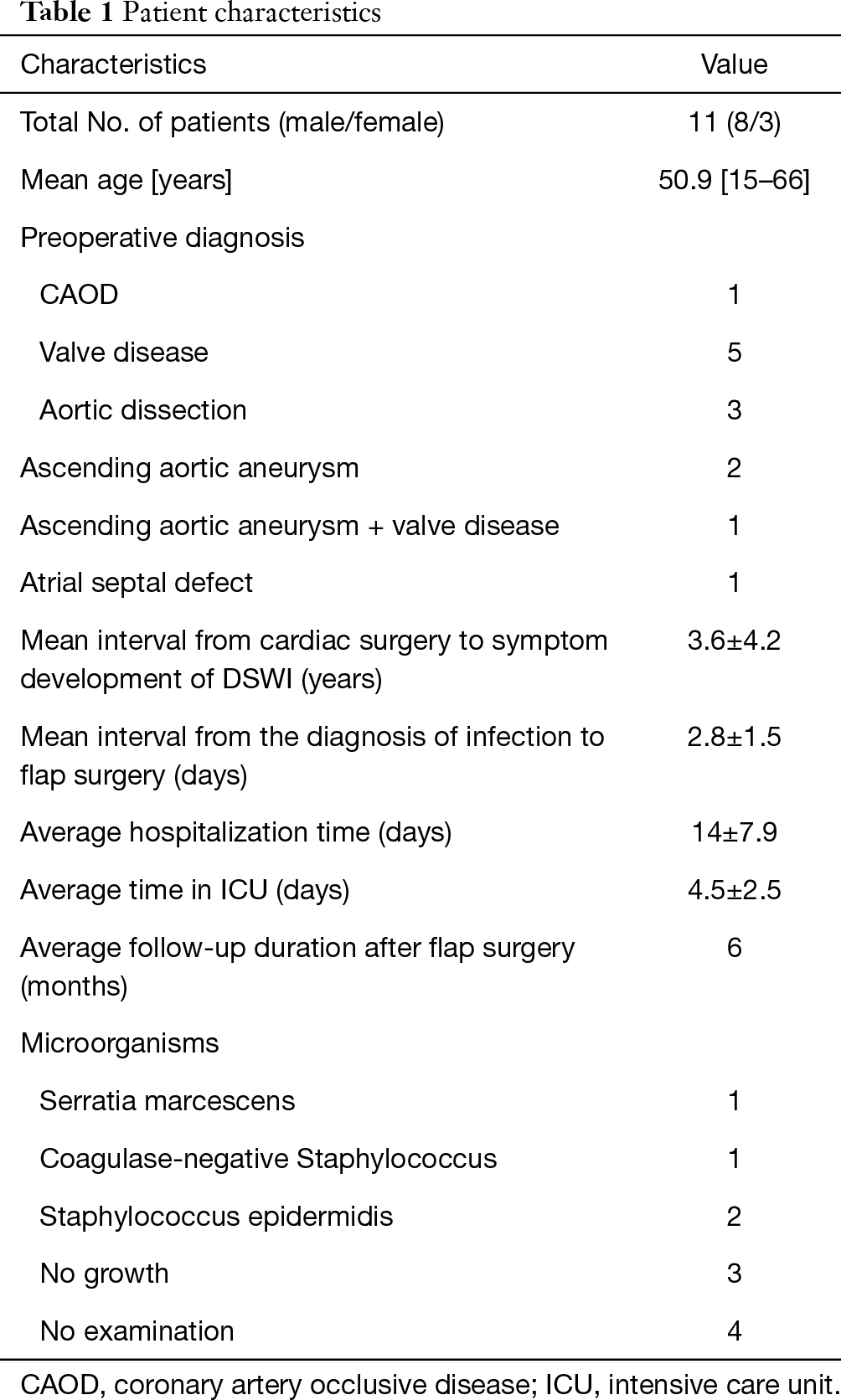 After a diagnosis of DSWI, the wound should be opened as soon as possible, deobstructed, and fully drained. Exudates or secretions from the wound should be collected for bacterial culture and drug sensitivity testing in order to guide the rational use of antibiotics, as well as to actively control blood sugar and correct anemia and hypoproteinemia. At the same time, the management of the patients’ nutrition should be strengthened and the patients should be given symptomatic treatment.

After general anesthesia and intubation, the patients were placed in the supine position. Taking the infection site of the primary incision as the center, the infected and necrotic tissue was resected along the margins of the sternal defect. The wirings fixing the sternum, along with the infected sternum and costal cartilage, was removed until normal bone tissue with a good blood supply was reached. The sinus, pus cavity, and residual foreign bodies in the tissue space were explored, the infection focus behind the sternum, abnormally proliferated granulation tissue and residual foreign bodies such as pacemaker leads and sutures were completely removed. Then, the wound was rinsed repeatedly with hydrogen peroxide, iodophor, and normal saline. After full debridement, complete hemostasis was required, and the wound secretions were collected for bacterial culture and drug sensitivity testing. 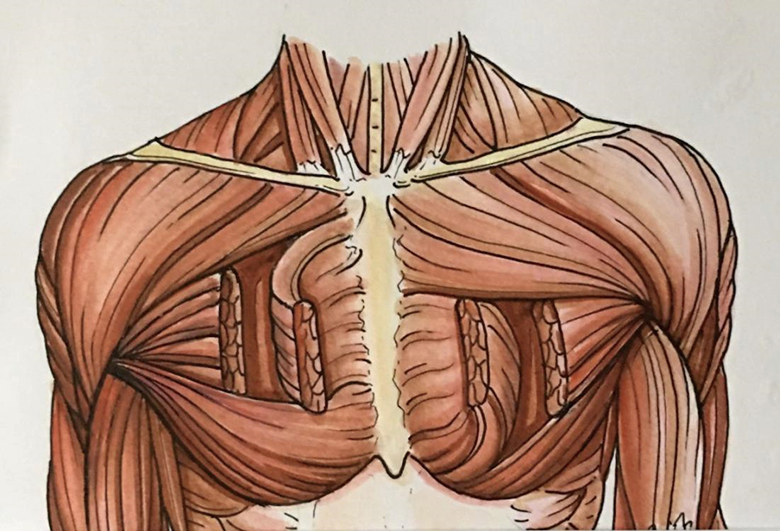 Electrocoagulation for hemostasis of the bilateral pectoralis major and wounds, and 1–3 suction drains were inserted beneath the skin flaps and the mediastinum, depending on the size of the wound. Tension-free suturing was performed with No.7 sutures. The entire layer of the skin and the subcutaneous tissue were sutured intermittently. All procedures performed in this study involving human participants were in accordance with the Declaration of Helsinki (as revised in 2013).

There were 10 cases of primary healing, and 1 case of delayed healing of the skin incision. None of the patients experienced subcutaneous hematoma or bleeding that required reopening and drainage. The mean hospitalization time was 14±7.9 days, and the mean intensive care unit (ICU) stay was 4.5±2.5 days. All patients recovered and were discharged. After discharge, none of the patients reported abnormal movement of the upper limbs or obvious abnormalities in the appearance of the chest.

The patients were followed up for an average of 6 months following flap surgery. None of the patients suffered recurrence of DSWI. No postoperative complications, including discomfort, abnormal movement of the upper limbs, and chest deformity, were reported by all 11 patients.

DSWI is a serious postoperative complication of median sternotomy. Compared with traditional treatments such as open wet dressing, occlusive continuous irrigation, and vacuum-assisted closure, full debridement followed by filling the dead space with autologous viable tissue with a good blood supply has the advantages of a high recovery rate and fast healing. Therefore, this method is considered to be the most effective treatment for DSWI at present, and several autologous viable tissues, such as pedicled greater omentum, and various muscle flaps have been used in its application (8).

Besides muscle flaps, pedicled greater omentum is the most commonly used material for filling sternal defects. The immune capacity and amorphous structure of the omentum give it an advantage over muscle flaps; however, it is associated with the risk of peritoneal infection and abdominal hernia. Moreover, the acquisition of the pedicled greater omentum requires opening of the abdominal cavity. This may increase the possibility of postoperative infection, and even the death of the patient may occur in severe cases. Therefore, the greater omental flap is usually used only in exceptional circumstances, such as for residual infection control (9).

Muscle flaps can be used more broadly than the pedicled greater omentum. The most commonly used muscle flaps include latissimus dorsi myocutaneous flap (LDMF), rectus abdominis myocutaneous flap (RAMF), and pectoralis major myocutaneous muscle flap (PMMF). Due to their different locations and application methods, these muscle flaps have their own unique advantages and disadvantages. The LDMF is mainly used to fill larger sternum defects but carries a risk of decreased vital capacity. The RAMF is close to the lower sternum and has enough volume to fill sternum defects, although it is associated with the risk of abdominal hernia (10-12).

Although the PMMF may reduce the coverage area due to the shrinkage of the pectoralis major after transplantation, it is closest to the incision and has enough volume to fill the upper two-thirds of the sternum. Therefore, it is the first-choice for the treatment of DSWI.

We successfully treated 11 patients with DSWI using this technique, while maintaining normal upper limb function and chest appearance. These preliminary clinical results show that this muscle flap technique is feasible and effective for the treatment of DSWI. This method provides enough muscle to cover the whole sternum and to fill the sternum defect, and can better retain the patient’s muscle function and chest shape. Our flap method can help to avoid the weakening of upper limb strength and thoracic deformity in DSWI patients with large sternal defects, while ensuring the correction of the defect. The advantages of our muscle flap method are as follows. (I) It provides enough muscles to fill the defect. (II) The pectoralis muscle does not need to be disinserted from the humerus, thus preserving upper limb function. (III) Only half of the pectoralis major needs to be turned over on each side, which reduces the donor area and avoids chest deformity.

The pectoralis major muscle flap is the most appropriate for the treatment of sternum defects. The reason is that the muscle has an adequate blood supply, including the septal branch of the internal thoracic artery and the muscular branch of the thoracoacromial artery, which can prevent ischemic necrosis of the muscle flap during its separation and turnover. Furthermore, the pectoralis major is adjacent to the sternum, and can be easily freed and transferred without additional incision. The third, the pectoralis major muscle flap can be taken according to the specific size and location of the defect, our clinical application shows that the flap method can reduce the trauma, shorten the operation time, and has no obvious impact on respiratory or upper limb function.

As with other pectoralis major muscle flaps, hematoma, seroma, and infection are the main complications risks of our flap technique. Complete hemostasis, irrigation, negative pressure drainage, and external compression are key to the prevention and treatment of these complications. Full debridement and removal of foreign bodies are also vital steps in the treatment of sternal infection.

In conclusion, our novel turnover flap technique using the bilateral partial pectoralis major muscle was not only shown to provide sufficient muscle volume for filling the defect, but it could also preserve the function of the upper limbs and prevent cosmetic deformity in the chest wall. Therefore, our muscle flap is a reasonable option for the treatment of DSWI.

Reporting Checklist: The authors have completed the STROBE reporting checklist. Available at http://dx.doi.org/10.21037/jtd-20-2845

Conflicts of Interest: All authors have completed the ICMJE uniform disclosure form (available at http://dx.doi.org/10.21037/jtd-20-2845). The authors have no conflicts of interest to declare.

Ethical Statement: The authors are accountable for all aspects of the work in ensuring that questions related to the accuracy or integrity of any part of the work are appropriately investigated and resolved. All procedures performed in this study involving human participants were in accordance with the Declaration of Helsinki (as revised in 2013). This surgical procedure was approved by the ethics committee of Fujian Medical University Union Hospital (No. 2020KY0100), and signed consent forms were obtained from the patients or their family members.