The utility of a 5th nap in multiple sleep latency test

Narcolepsy is a rare, chronic disorder that affects the regulation of the sleep wake cycle. It is estimated that it affects 0.05% of the general population; that is almost 31,000 people within the UK (1). The prevalence of the condition is equal in both men and women with those affected normally diagnosed between the ages of 20 and 40. It can also be found throughout the world in all races and ethnic groups albeit with differing penetration (2). The main manifestations of narcolepsy are: excessive daytime sleepiness, cataplexy, disturbed nighttime sleep, hypnagogic/hypnopompic hallucinations and sleep paralysis. However, the presence of all these symptoms is only seen in about 15% of patients (3). Although cataplexy is pathognomonic for narcolepsy and is present in approximately 70% of narcolepsy patients; its absence increases the challenge of diagnosis. In contrast, excessive daytime sleepiness is most often the first presenting symptom and is found in all patients with narcolepsy (4).

The cause of narcolepsy is still unknown, but both environmental and genetic factors are involved in the pathogenesis. First-degree relatives of narcoleptics have greater chance of developing narcolepsy than the general population. A suspected cause is the autoimmune response towards hypocretin producing neurons within the hypothalamus. These neurons play a crucial role in the regulation of both appetite and sleep cycles (5). This can lead to little or no hypocretin present within the cerebrospinal fluid (CSF), especially in the cases with cataplexy. Variations in the human leukocyte antigen (HLA) complex have been shown to be a predisposing factor for the development of narcolepsy. Other potential triggers may include hormonal changes (e.g., puberty) or flu vaccination.

Symptoms of narcolepsy arise from disruption of the normal sleep wake cycle. The hallmark of narcolepsy is that REM sleep may occur within 15 minutes of sleep onset. Moreover, sleep is often disrupted with frequent awakenings and increased motor activity. There is also decreased amount of REM sleep that leads to excessive daytime sleepiness (6).

It is estimated that over 80% of narcoleptics remain undiagnosed, and the diagnosis may take up to 10 years since the beginning of symptoms to be made. An accurate diagnosis is crucial before starting the treatment, because the drugs will have to be used lifelong.

There are currently two main types of narcolepsy, according to the International Classification of Sleep Disorders (ICSD) (3rd edition): narcolepsy with cataplexy (narcolepsy type 1) and narcolepsy without cataplexy (narcolepsy type 2) (7). It should be noted that narcolepsy can also be secondary to medical conditions. In all categories excessive daytime sleepiness must have been present for at least three months. Associated features such as sleep paralysis, hypnogogic hallucinations and automatic behaviours may be present and polysomnography testing must be performed. In patients with cataplexy the diagnosis is straightforward, but in any case a full night polysomnography is essential.

If cataplexy is not present, the diagnosis can be challenging. If there are no medical or neurological conditions to account for secondary narcolepsy such as Parkinson’s disease, then polysomnographic testing is needed. The tests include both nocturnal polysomnography and the multiple sleep latency test (MSLT). One or more of four diagnostic criteria should be met for a diagnosis to be made. Upon nocturnal testing a REM sleep latency of less than 15 minutes is suggestive. When undergoing MSLT, sleep latency of less than 8 minutes and/or the presence of two or more sleep onset rapid eye movements (SOREMs) periods are diagnostic (Table 1). Whenever possible, CSF hypocretin-1 levels can be measured to provide confirmation through lumbar puncture. 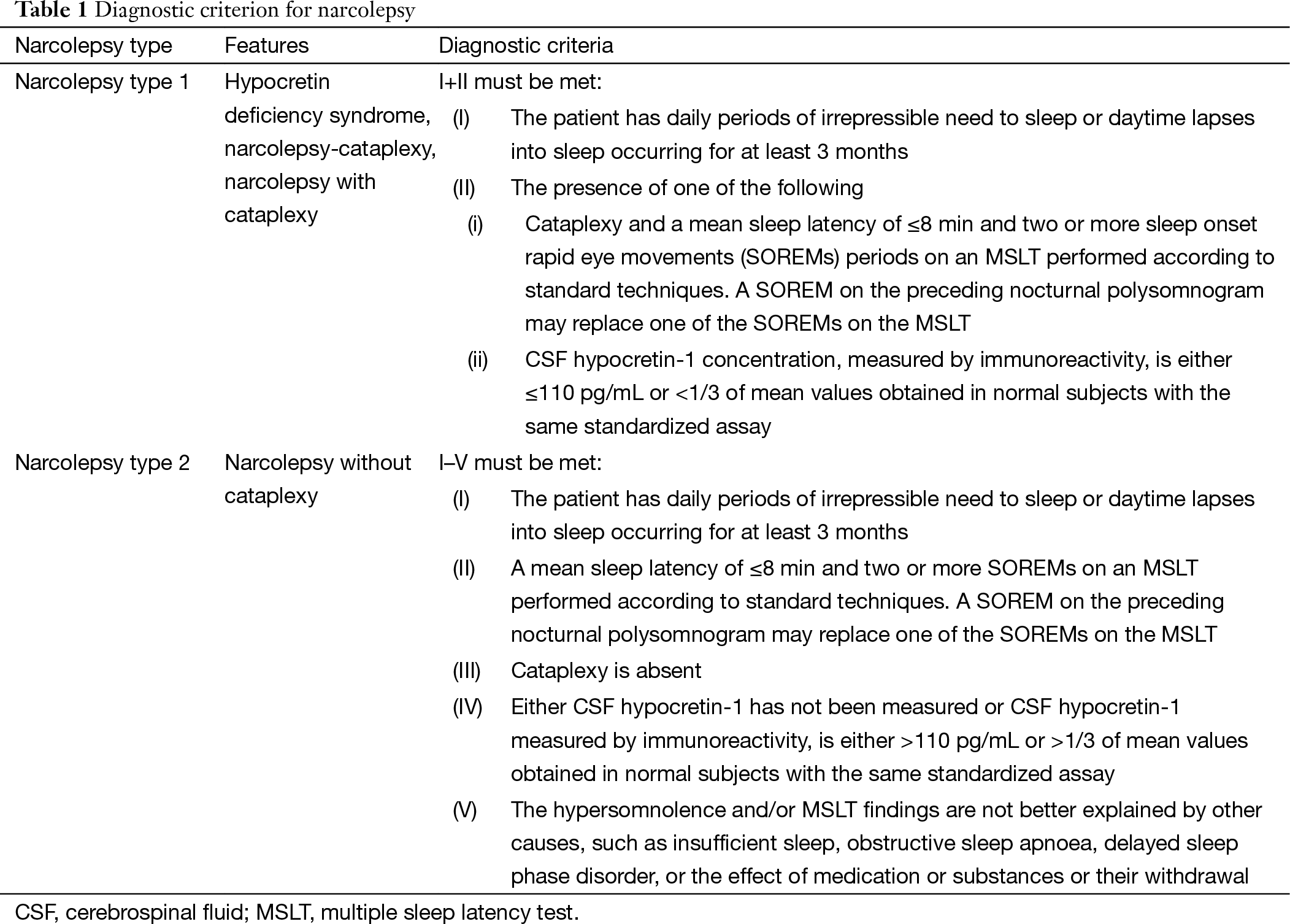 The MSLT is used to test patients for excessive daytime sleepiness and is a crucial diagnostic tool for narcolepsy. The MSLT is done the day after the night polysomnography in the sleep laboratory. Any stimulant drugs or sedatives have to be stopped at least two weeks before the test (8). During the test electroencephalography, electrooculogram and electromyogram are recorded. There are 4 or 5 opportunities to nap for 20 minutes sessions, each two hours apart. The tendency to fall asleep during these naps is then measured.

In a study of 2,083 subjects, where 170 had been diagnosed with narcolepsy, the sensitivity of having a mean sleep latency of less than or equal to 5 minutes or/and two or more SOREMs was 70% and the specificity was 97%. However, almost 30% of those who had both diagnostic criteria did not have narcolepsy; thus the MSLT is valuable when used in combination with other clinical tests. A positive MSLT can also be found in other sleep disorders such as behaviourally induced inadequate sleep syndrome.

This retrospective study was carried out in our Sleep Disorders Centre. The study period covered was November 2011 to November 2014. A total of 378 patients had overnight polysomnography followed by an MSLT during that period to investigate the possibility of Narcolepsy. Reports of these studies were scanned to determine those that had had a 5th nap performed in their MSLT. A full medical history and sleep history was also available for each patient, including age, gender, BMI. The Epworth Sleepiness Scale (ESS) score was also available for each patient.

An overnight full polysomnography (NPSG) was performed in all participants as well as an MSLT the day after the night study (RemLogic Version 2.0.2). Information from these reports regarding the MSLT was recorded including the sleep latency in each nap, REM presence and number of naps that were used for the diagnosis.

Results are reported as mean ± SEM. Continuous variables were compared between groups using one-way analysis of variance (ANOVA). Post-hoc analyses were performed where indicated. Statistical significance was defined as P<0.05. IBM SPSS Statistics v.20 was used for all the statistics. 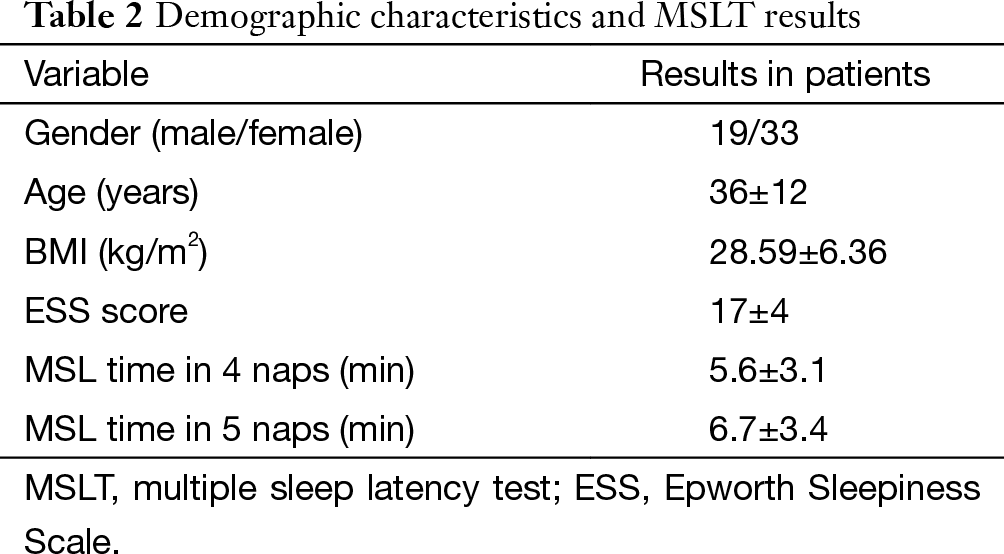 The usefulness of a 5th nap was tested in the studied population. After the 5th nap opportunity was given to the studied population, a diagnosis was made in six patients (according to the strict criteria of MSL <8 min and ≥2 SOREMs). However these were only 6 out of the 37 subjects that had a MSL of <8 minutes and 1 SOREM after the first four naps that could be given a diagnosis of narcolepsy based on the MSLT.

There was an increase in the appearance of a SOREM if a 5th nap opportunity was given to the patients and this finding was statistically significant. As calculated by the means of the receiver operating characteristic (ROC) curve the patients that have a mean sleep latency of 4.8 min in the first four naps and a history suggesting of narcolepsy should be given a 5th nap opportunity as it would have a greater diagnostic yield (Figure 1). 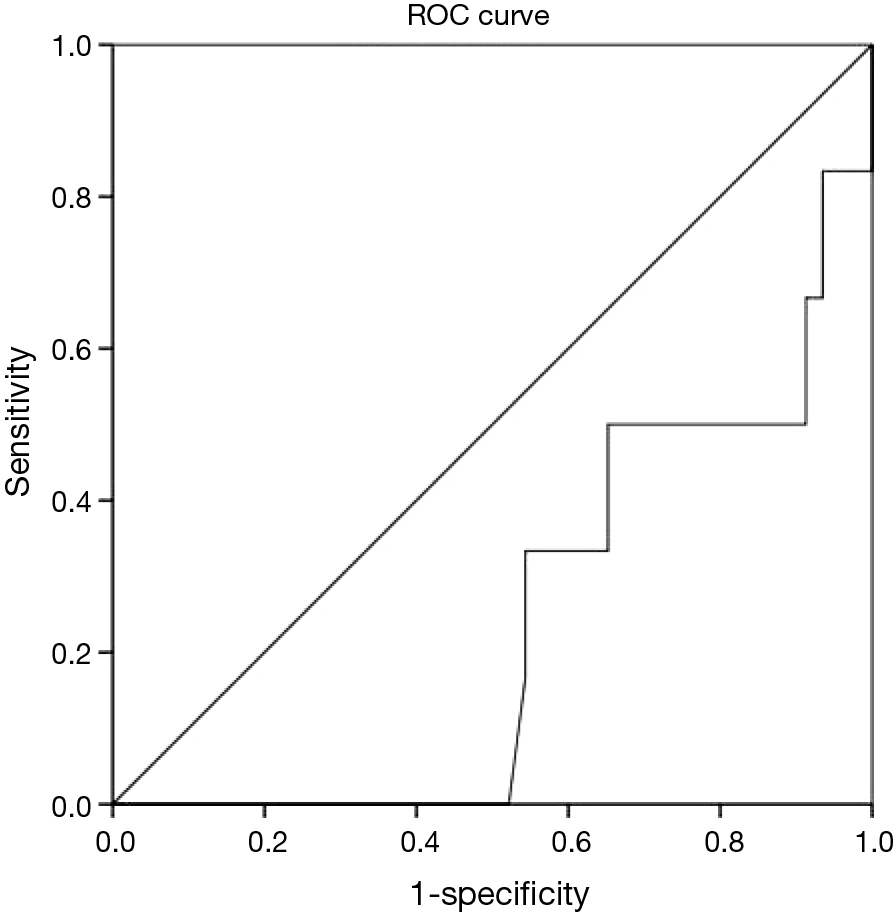 The number of naps that are carried out in an MSLT study is not strictly defined. Usually, during an MSLT study four naps opportunities are given to the patient; however in some cases a 5th nap may be allowed. The 5th nap is performed when the patient has already had only one SOREM during the previous four naps. Therefore, a 5th nap opportunity allows a safer diagnosis in patients who have a history suggestive of narcolepsy. On the other hand, a 5th nap later on in the afternoon may hinder diagnosis. This 5th nap may be unexpected; thus causing increased anxiety. Furthermore, as a 5th nap is often rarely performed, patients may find themselves alone in the sleep center, once more increasing their anxiety and reluctance to sleep. The anxiety about the journey back home is also not helpful. Therefore, the execution of a 5th nap may decrease accuracy of the MSLT due to production of increased mean sleep latency.

Only a few studies have investigated the utility of the 5th nap. A study of 90 patients, 45 with narcolepsy and 45 with other disorders of excessive sleepiness described how an increased latency to stage 1 sleep was seen on a 5th nap compared to the MSL of naps 1–4 when carried out 15 minutes after the 4th nap. This increase was greater in those with narcolepsy. There was also no change in latency within the 5th nap when it was changed from 15 to 30 minutes (9).

Our findings show that a 5th nap is rarely performed during the MSLT study in our Sleep Disorders Centre. This reflects a growing lack of trust by clinicians in the utility of the 5th nap to interpret results of the MSLT. However, in the studied population, the 5th nap lead to a diagnosis of narcolepsy in six patients, based on the MSLT. Nonetheless, there is an ongoing debate on whether the 5th nap is worth the cost, labour and heightened anxiety for the patient when only it is clinically useful only for a small proportion of patients. These patients normally had the 5th nap performed at around 16.30, when most are expecting to be heading home, making the patients less likely to sleep during the 5th nap. These anxieties could be reflected in the fact that 16 patients did not sleep in the 5th nap and that the MSL increased from the 4th to 5th nap. According to the ICSD-3 criteria, MSL is an influential marker in the diagnosis of narcolepsy, therefore one could argue that by including a 5th nap it is unlikely to gain much more information to aid diagnosis except in a few circumstances.

Moreover, a detailed history (including Epworth score) of the patients should always be carefully considered before performing the NPSG and MSLT studies, because an MSLT study cannot lead to a safe diagnosis by itself. Another important point is that a SOREM in the preceding night polysomnography can be counted together with the SOREMs in the MSLT. Thus, the 5th nap opportunity may be less important in a number of cases.

Thought should be given to the benefit to cost balance of going to the lengths of including a 5th nap when there is strong indication to presence of a primary hypersomnia. There is evidence for an overlap between idiopathic hypersomnia (diagnosed when there are <2 SOREMPS) and narcolepsy (especially without cataplexy). In a study of 42 patients with idiopathic hypersomnia 32% had clinical features similar to narcolepsy and a further 39% had intermediate clinical characteristics between the two disorders. As pathophysiology and therapeutic response is very similar for these two, argument could be given towards leaving a 5th nap when treatment plan would differ little regardless of diagnostic outcome (10,11).

A few limitations of this study have to be mentioned. In this retrospective study, we included only patients who had undergone a 5-nap MSLT, which had been ordered by the clinicians according to each patient history. The number of subjects is modest, so larger number of patients could be used in future studies.

In this study, we tested the value of a 5th nap in an MSLT study as a diagnostic tool in patients with a past history suggestive of narcolepsy. The mean sleep latency between the four and the five nap opportunities and the mean time in the five naps test was significantly increased. Moreover, after the 5th nap opportunity was given to the studied population, a diagnosis was made in six patients.

In conclusion, a 5th nap opportunity should be given in patients with a history that may suggest narcolepsy. Moreover, if the mean sleep latency is below 4.8 min in the first four naps, then a 5th nap may give a definite diagnosis according to the strict diagnostic criteria for narcolepsy. Our study shows that only a few patients may benefit from a 5th nap opportunity in an MSLT study, but this nap may be important for the establishment of a diagnosis given a history suggestive of narcolepsy.

Disclaimer: Its contents are solely the responsibility of the authors.