Continuous positive airway pressure (CPAP) usage is variable in obstructive sleep apnoea (OSA). Large scale trials of CPAP for patients recruited based on cardiovascular risk, who are generally less sleepy, have shown particularly low usage (1). This may be due to patients not perceiving benefit from CPAP, as they are usually not very sleepy.

In a previous study, severity of OSA, measured by the oxygen desaturation index (ODI) >4%, was predictive of CPAP compliance (2). This work looked at patients with OSA from the sleep clinic who mainly had classical symptoms of excessive daytime somnolence (EDS). It is interesting to note that in this previous paper, symptoms, particularly as measured by the Epworth sleepiness score (ESS), were not predictive of long-term CPAP compliance.

In patients with OSA and EDS, CPAP treatment not only improves symptoms, but it also reduces blood pressure (3). However, a recent meta-analysis (4), in minimally symptomatic patients, also showed that CPAP treatment did, on average, reduce daytime somnolence compared to controls, but only improved diastolic blood pressure in patients who used CPAP for ≥4 h/night. Predicting long-term CPAP usage in minimally symptomatic OSA patients would be useful to identify patients most likely to benefit from therapy.

In this current study: first, we aimed to see if the relationship between ODI and CPAP usage found in our earlier work could be verified in a population of minimally symptomatic patients and whether any other baseline characteristics predicted long-term CPAP usage; second, we aimed to see if early patterns of CPAP usage were predictive of usage at 6 months, to test the validity of using only a short trial of CPAP to determine longer-term use.

The MOSAIC trial was a multicentre randomised, parallel, 6-month controlled trial that was conducted between May 2006 and February 2010. The trial was approved by the ethics committees of all the centres (REC No: 05/Q1604/159) and registered (ISRCTN 34164388).

Patients were randomized to 6 months of CPAP, or standard care, if they had an ODI of >7.5 events/h due to OSA on a baseline sleep study, but the enrolling physician and patient felt they had insufficient daytime symptoms to mandate CPAP treatment. The full protocol has been published previously (5).

In this current study we assessed only the patients randomised to CPAP in the MOSAIC trial. First, we investigated the association of baseline characteristics with 6 months CPAP usage. Second, we explored the correlation between 2 and 4 weeks usage of CPAP and 6 months usage.

Patients were invited to follow-up between 2 and 4 weeks, and 6 months after randomisation. Data was analysed regardless of exactly when they attended these trial appointments. CPAP usage was assessed at the 2–4 weeks and the 6 months visits. Study withdrawals were assigned 0:00 h:min/night (h/n) in the analyses.

At 2–4 weeks follow-up, all nights were analysed where available and a mean nightly usage calculated.

Method 2 was thought most likely to reflect longer-term CPAP usage beyond 6 months. Method 2 however, runs the risk of not necessarily being fully representative due to short term differences such as a holiday, or an upper respiratory tract infection.

To explore a different aspect of CPAP acceptance in this minimally symptomatic group, patients were asked at the 6 months follow-up whether they were prepared to continue CPAP beyond the 6 months trial period. Study withdrawals and those with missing data were assumed to have been unwilling to continue CPAP.

One hundred and ninety-five patients were randomised to receive CPAP during the MOSAIC trial. The baseline characteristics for these patients are shown in Table 1. 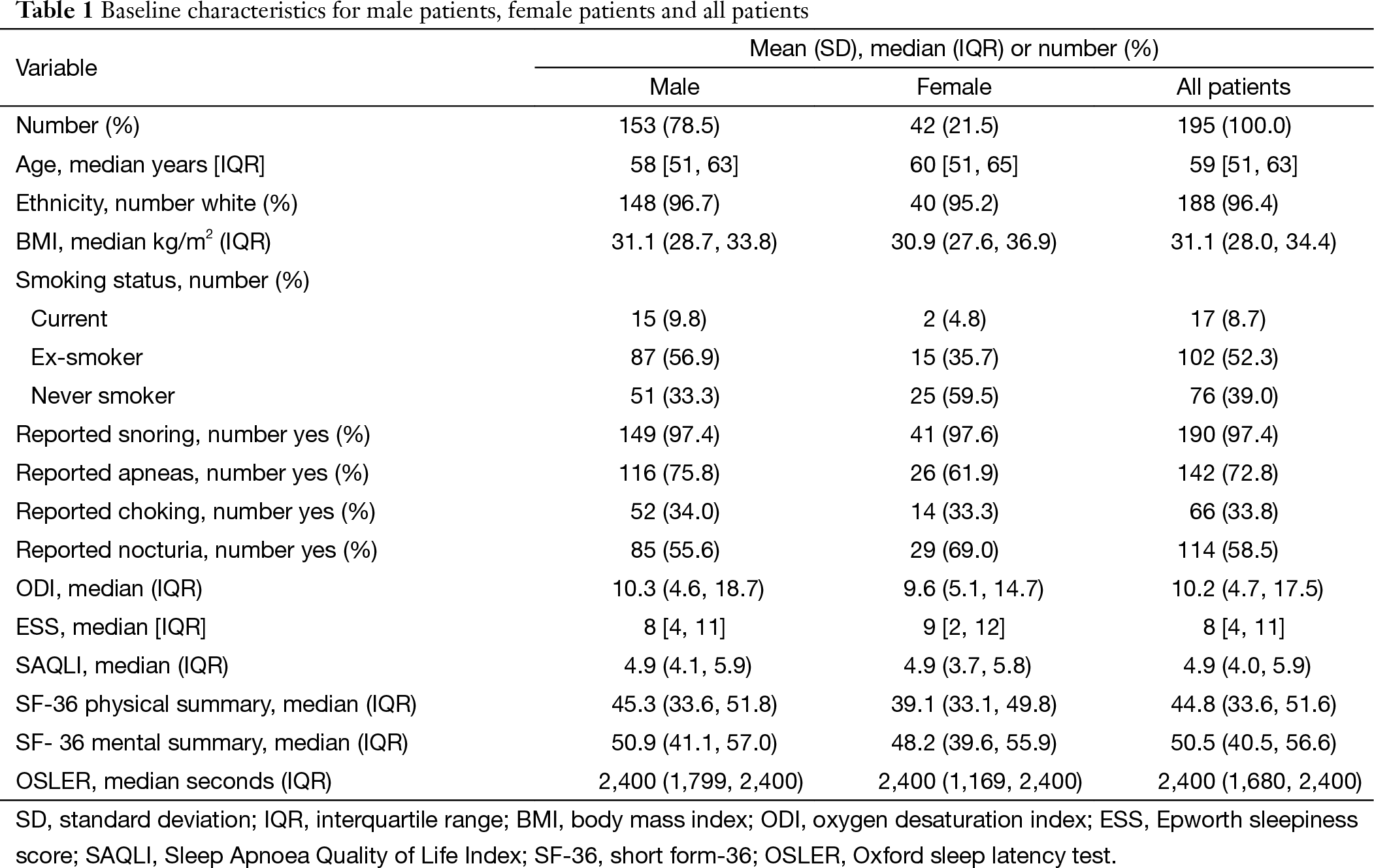 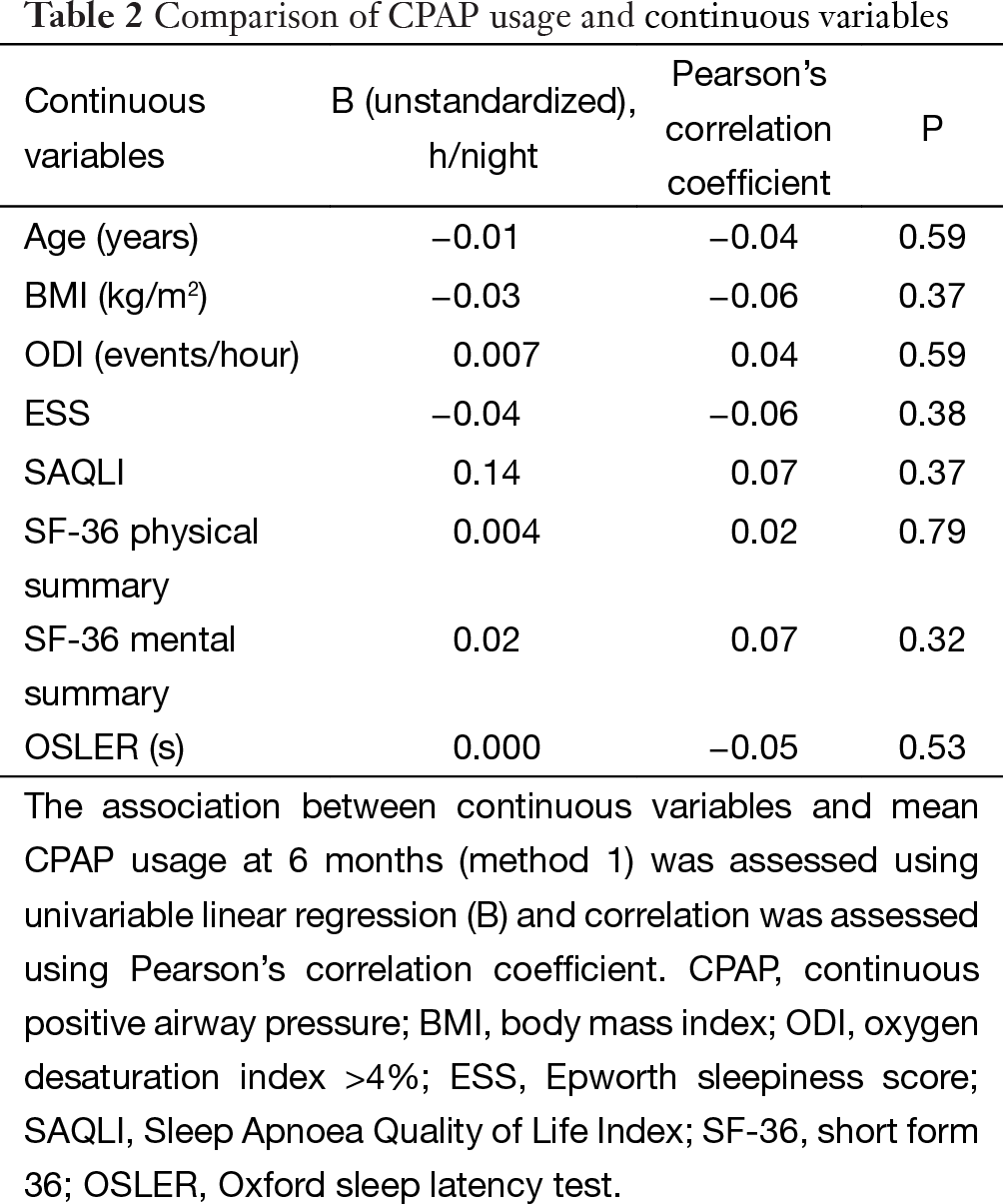 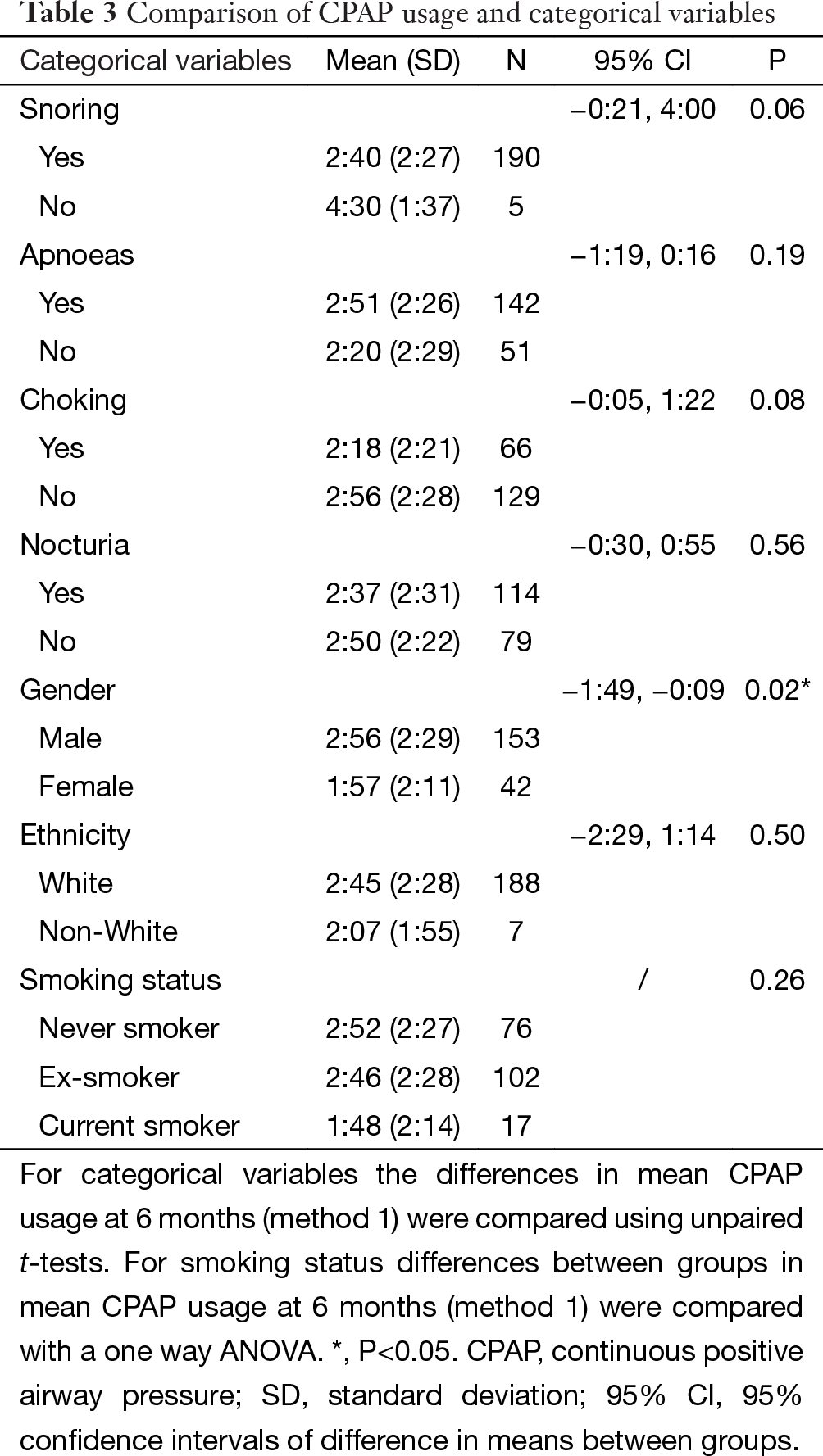 In method 2 analyses, using only this last week of usage data, body mass index (BMI) was associated with increased long-term CPAP use (unstandardized B =−0:04 h/n per 1 kg/m2 increase in BMI, r=−0.15, P=0.04) and male gender was associated with increased long-term CPAP use (male mean usage =3:02 h/n, female =1:56 h/n, P=0.01). No other baseline characteristics were significantly associated with long-term CPAP usage. Forwards multivariable analysis selected gender (r2=0.03) and backwards multivariable analysis selected both gender and BMI (r2=0.04), and suggested gender is dominant, but it still explained very little of the variance. 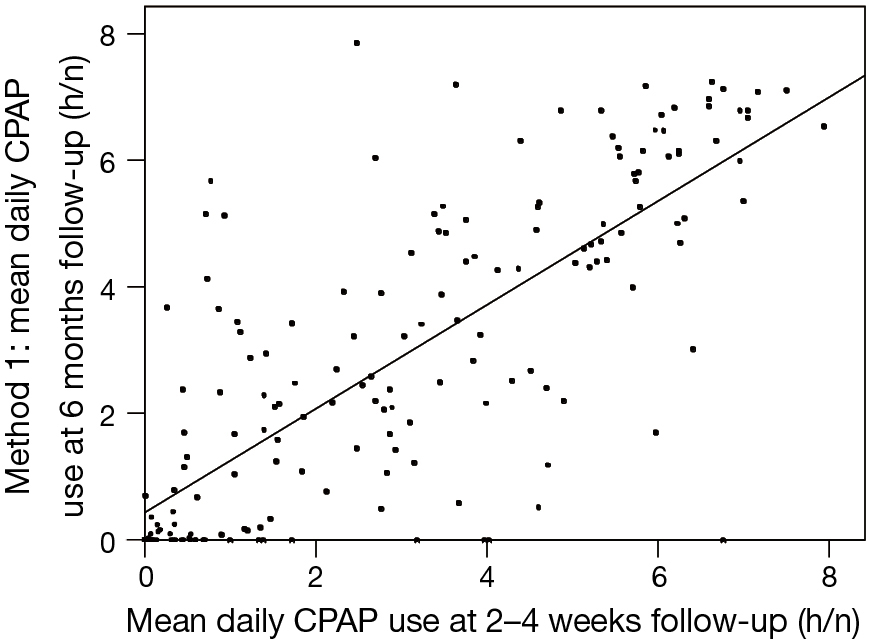 One hundred and thirty-eight patients (70.8%) were prepared to continue CPAP beyond the 6 months follow-up. Despite declaring a preparedness to continue CPAP, 41 of these 138 patients (30%) had used CPAP for less than 2:00 h/n.

In patients with minimally symptomatic OSA the baseline characteristic most associated with increased CPAP usage at 6 months was male gender. There was only a moderate correlation between 2 and 4 weeks usage of CPAP and 6 months usage; approximately 50% of the variance in long-term use being predicted by the short term use.

Gender differences have been reported previously, with higher CPAP usage in male patients (2,7,8). Only 42 of our participants were female, but our finding of higher male CPAP use supports a similar gender difference in CPAP usage for this minimally symptomatic group. This difference was not explained by sleep apnoea severity or differing symptoms between males and females. ODI and symptoms (ESS, SAQLI, SF-36) were similar in males and females at baseline, and did not show a significant contribution in the regression analysis.

Previously our unit conducted a large study of 639 patients initiated on CPAP (2). ODI was significantly correlated with CPAP adherence, but ESS was not. Elsewhere ESS alone was linked to CPAP usage (1), and in contrast Somiah et al. (9) found neither were correlated to CPAP usage. In this trial of patients with minimally symptomatic OSA we were not able to reproduce data showing either OSA severity (ODI) or ESS to be significant indicators of long-term CPAP usage.

The reasons why baseline ESS, ODI or other factors have not been consistently predictive of CPAP usage are not clear. It may be that we are simply not currently measuring at baseline the critical factors that determine CPAP usage; for example patient personality or other unmeasured consequences of sleep fragmentation. A second possibility is that a given ESS score is unlikely to indicate the same degree of sleepiness in different individuals, as people perceive the score differently. Supporting this concept, is the fact that the reduction in ESS, from baseline to 6 months, was associated with 6 months average CPAP usage (method 1; unstandardized B =0:14 h/n per 1 point increase in ESS, r=0.30, P<0.001), suggesting that the change in ESS following treatment may be more representative of the effects of OSA on an individual than the absolute value at baseline.

Patterns of CPAP usage have been shown to be established as early as the 4th night of CPAP use (10). We too have found in general that levels of CPAP usage are established early, with usage of CPAP at 2–4 weeks being moderately correlated to 6 months usage. However, a 2–4 weeks trial of CPAP for some is probably too short, as a significant minority (15 of 113 patients; 13%) who used CPAP <4 h/n at 2–4 weeks nonetheless went on to use CPAP for >4 h/n at the 6 months follow-up (method 1). Identifying low usage early may give clinicians an opportunity to improve usage, rather than being regarded as an indication of poor response.

Our analysis of usage in the last week prior to 6 months follow-up (method 2) was performed as this might be more representative of long-term usage, rather than the 6 months average following the first follow-up appointment (method 1). Usage was very similar in this last week compared to the whole 6 months average. In method 1, the median usage was 2:17 h/n, compared to 2:12 h/n in method 2 analysis (r=0.80, P<0.001). Both analyses showed that male gender was the baseline characteristic most strongly associated with increased longer-term CPAP usage.

Willingness to continue CPAP is often thought of as indicative of actual continuing CPAP usage. However, we found that many patients prepared to continue CPAP were in fact only using CPAP for 2 h or less a night (30%). Patients may only use CPAP on single nights prior to important events, such as driving long distances, and they may have significant personal benefit from CPAP below the current thresholds (non-evidence-based) currently used to define ‘adequate’ compliance (11).

Despite CPAP being of overall benefit in patients with minimally symptomatic OSA, this study has shown that male gender was associated with increased long-term CPAP usage at 6 months, and not ESS or ODI. Gender accounted for very little of the variation in CPAP usage at 6 months. Furthermore, this study supports research suggesting that patterns of CPAP usage are established early, although they can change in a clinically significant minority. One month may be too short a length of trial to determine patients likely to benefit from CPAP therapy in the longer term.

The British Heart Foundation—unrestricted project grant, Oxford Health Services Research Committee paid for research salaries. ResMed UK made an unrestricted charitable donation to support research work in the Oxford Sleep Unit in 1998 and 2006, and supplied the CPAP machines for this trial. We would like to acknowledge the support of the NIHR Biomedical Research Centre Oxford.

Conflicts of Interest: JR Stradling has done some consulting work for ResMed (Abingdon, UK). No other authors have any conflicts of interest to declare.