Even though 20% of Guillain-Barré syndrome patients remain severely disabled and 5% die (1), the common misconception is that it still has a good prognosis. Furthermore, about 30% of patients experience respiratory failure requiring intensive care and invasive mechanical ventilation (2). The diagnostic criteria for Guillain-Barré syndrome have not yet been defined and the condition is diagnosed primarily through a clinical history assessment and findings upon presentation. However, the importance of initial symptoms associated with antecedent infection and the duration from onset to diagnosis remain unknown, particularly in patients with respiratory failure. We describe two patients with Guillain-Barré syndrome accompanied by respiratory failure, review 21 Japanese patients described in the literature and discuss clinical diagnostic clues.

A 44-year-old man was admitted to a local hospital (day 0) one month before presenting at our hospital with fever and dyspnea that had persisted for one week and for two days, respectively. His medical history included type 2 diabetes mellitus, essential hypertension, hyperlipidemia that had been poorly controlled for nine years and obesity. The dyspnea had worsened and oxygen saturation was 92% at 8 L/min delivered via a mask. One day after admission to the local hospital, mechanical ventilation was applied under a diagnosis of pneumonia. Thereafter, his general condition improved under antibiotic therapy, but three attempts to wean him from the mechanical ventilation failed so he was transferred to our hospital on day 32.

Except for a body mass index of 39.7 and laboratory data that revealed slightly elevated levels of white blood cells (11,000 /mL), C-reactive protein (CRP) (2.1 mg/dL), glucose (350 mg/dL) and HbA1c (8.3%), physical findings were normal upon admission to our hospital. Arterial blood gas analysis demonstrated PaO2, 123 torr; PaCO2, 37.4 torr; pH, 7.45; and bicarbonate, 24.6 mM with a FiO2 of 40%. Intensive reviews of his medical records from the local hospital and his medical history (Figure 1) indicated that muscle weakness had started to spread from the lower to the upper limbs two days before admission to the local hospital, peaked on day 16 and continued to day 32. Tidal volume (TV) on mechanical ventilation gradually decreased from day 2 (800 mL/event) to day 16 (266 mL/event) without neuromuscular relaxants, but spontaneously resolved somewhat (550 mL/event) on admission to our hospital on day 32, which suggested phrenic nerve palsy. Based on the clinical findings of muscle weakness in the limbs and phrenic nerve palsy presenting as a decrease in tidal volume with a history of difficulty in weaning off mechanical ventilation, we suspected Guillain-Barré syndrome (GBS). A neurological examination revealed decreased positional sense in the lower limbs, depressed tendon reflexes, the presence of ciliary sign, and a bilateral abducens muscle disorder, suggesting palsy of the facial and bilateral abducens nerve. 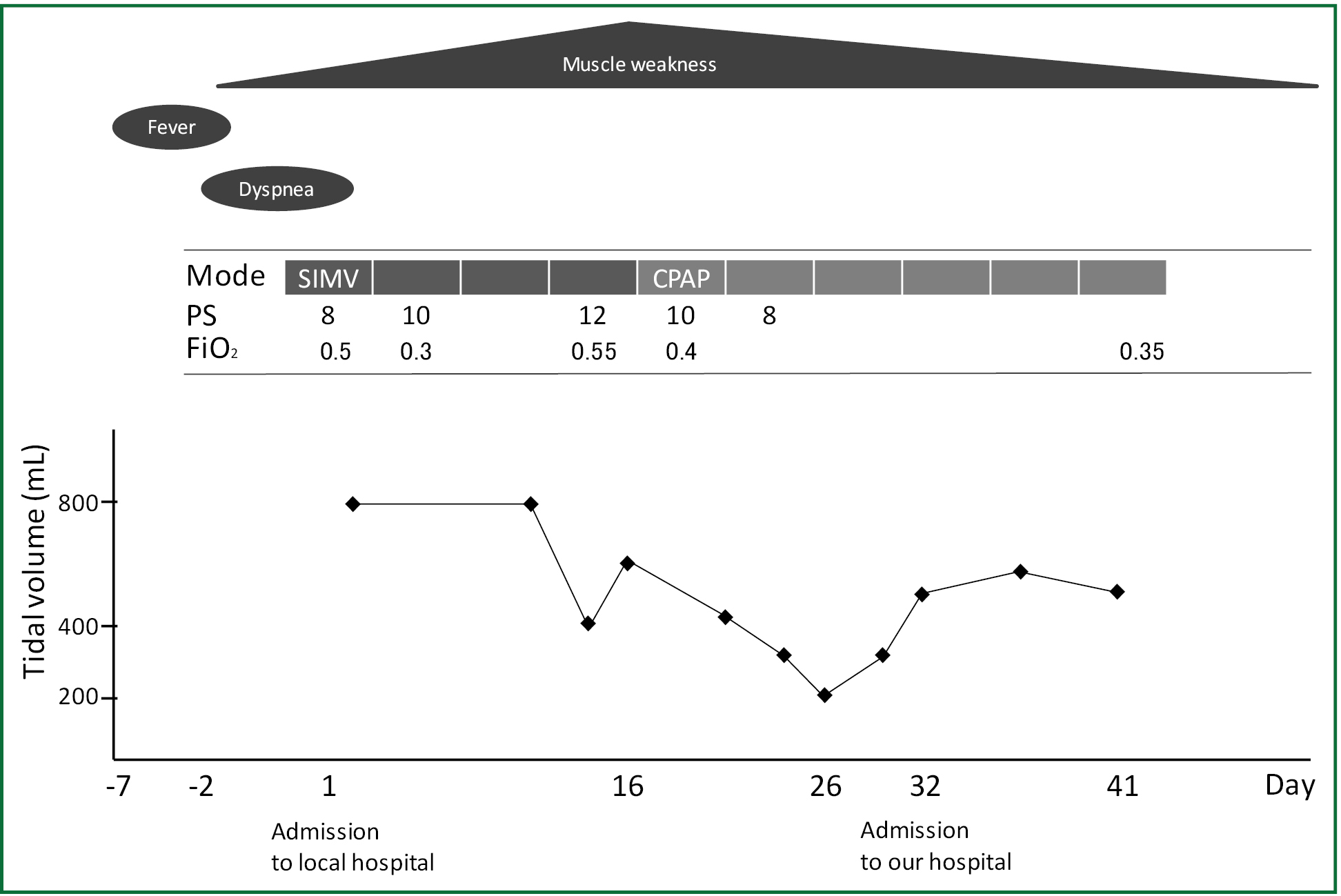 Thereafter, he generally improved with supportive care, and was weaned from mechanical ventilation at day 45. At day 50, he returned to the local hospital for rehabilitation.

A 74-year-old man presented at our emergency department due to pulmonary aspiration while eating. He had dysphagia, numbness and muscle weakness in the extremities that had started in lower limbs two days before presentation. His medical history included maintenance hemodialysis for chronic glomerulonephritis, aortic valve replacement for aortic stenosis and pacemaker implantation for sick sinus syndrome at the ages of 67, 70, and 71 years, respectively. He was conscious and all vital signs were normal except for hypoxemia of 87% in ambient air and mild tachypnea (26/min). A physical examination uncovered decreased breath sounds over the right middle to lower lung fields. A chest X-ray obtained on the same day revealed mild consolidation in the middle to lower lung area. He was thus diagnosed with aspiration pneumonia and admitted to the intensive care unit (day 0). Laboratory findings demonstrated mildly elevated serum CRP (7.9 mg/dL). Blood gas analysis with a 10 L/min oxygen supply delivered via mask showed hypoxemia, 69.6 torr; PaCO2, 44.4 torr; pH 7.373; and bicarbonate, 25.3 mM. His respiratory status remarkably improved after starting antibiotic therapy and oxygen saturation increased to 100% SpO2 in ambient air at day 2. However, muscle weakness in limbs and dysphagia deteriorated (Figure 2). Under a suspicion of GBS, nerve conduction studies (NCS) at day 3 confirmed a demyelination pattern. Anti-ganglioside antibody was negative, and no other tests were undertaken regarding antecedent infection although he described having diarrhea 30 days before arrival at our hospital. Thus, he was diagnosed with GBS based on clinical and NCS findings and treated with intravenous immunoglobulin (IVIg; 15 g/day for 5 days). Thereafter, the muscle weakness and dysphagia probably due to glossopharyngeal and vagus nerve palsy gradually improved, and he was moved to an ordinary ward. However, these symptoms recurred at day 53, and we considered that GBS was the cause. He received IVIg once again, but aspiration pneumonia due to bulbar palsy and muscle weakness deteriorated once again, and he died on day 60. 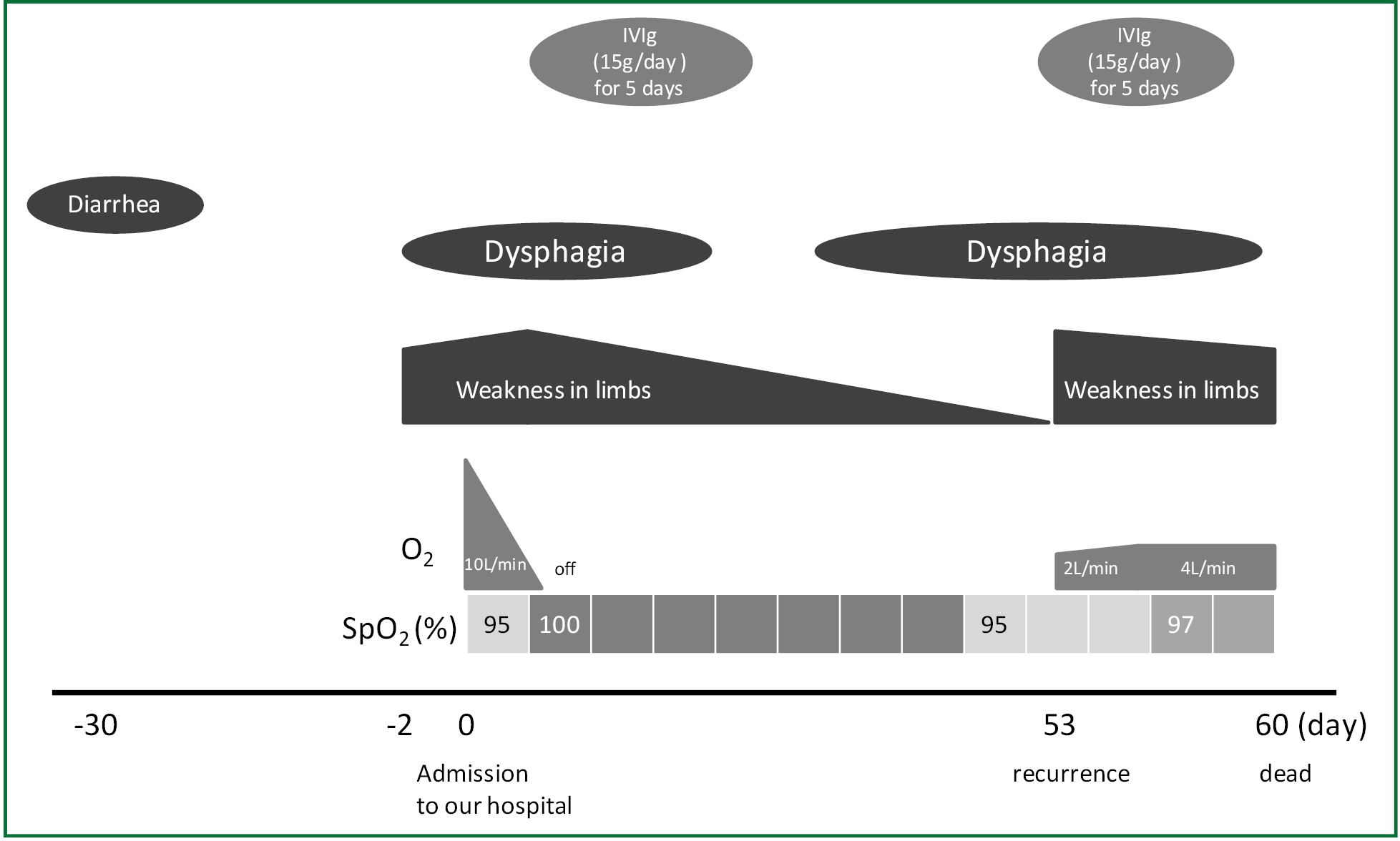 We described two patients with GBS and respiratory failure with and without mechanical ventilation. Aspiration pneumonia and asphyxiation are frequently encountered by pulmonologists, but the discrimination of these symptoms associated with GBS is critical. From this viewpoint, Table 1 shows our findings on an intensive review of reports describing the initial onset of GBS associated with antecedent infection (3-18). We identified and reviewed 23 Japanese patients with GBS accompanied by respiratory failure gathered from our institution (n=2) and an online source (n=21). The male to female ratio of these patients was 17:6, the mean (±SD) age was 43.5±19.2 (range, 11 to 74) years and 19 of them required mechanical ventilation. Eight of them had underlying pathologies, 13 did not and descriptions were not provided for two. 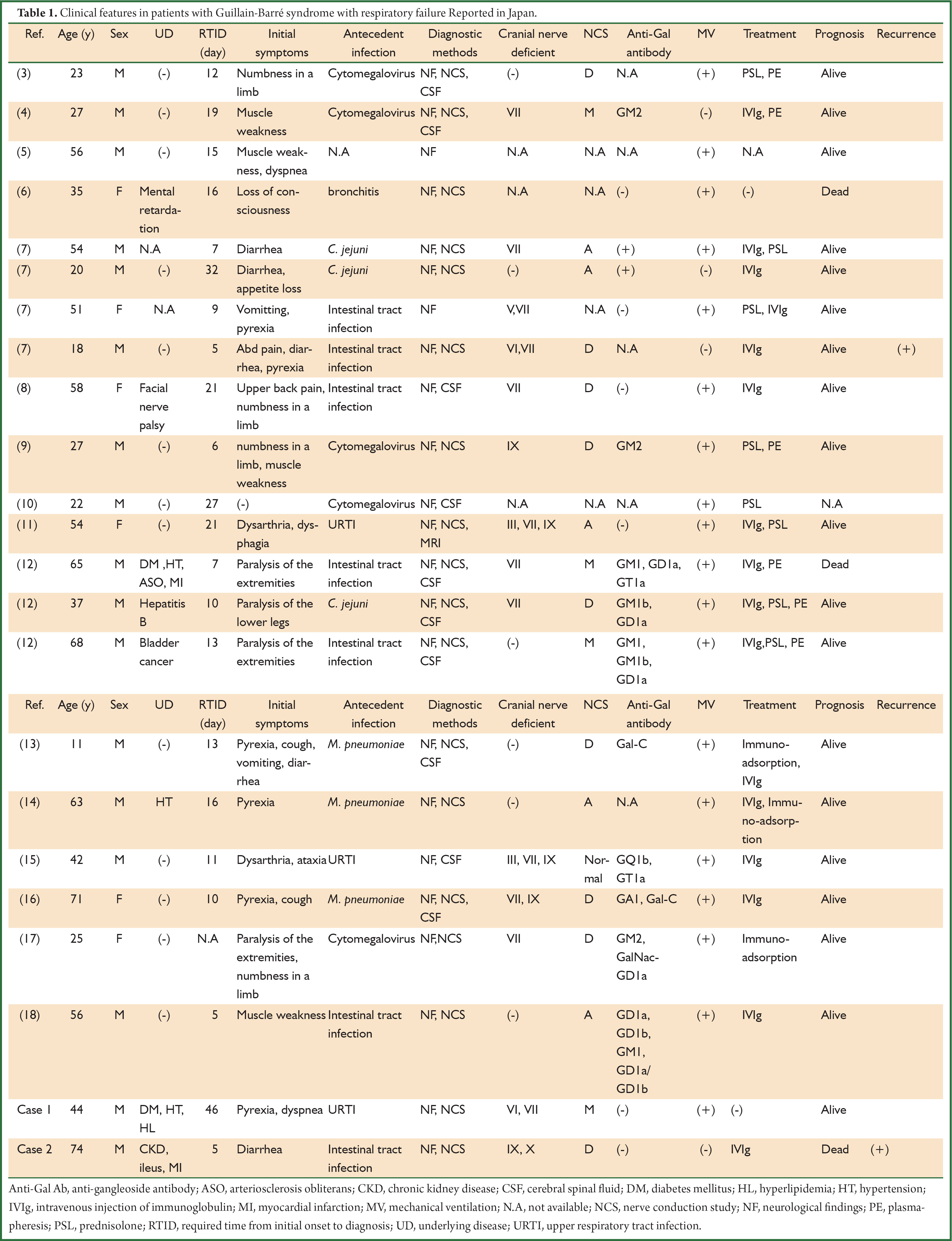 The interval between initial onset and diagnosis ranged from a mean (± SD) of 14.8±10.0 (range, 5 to 46) days. All patients except one had apparent antecedent infection caused by cytomegalovirus (n=5; 21.7%), Campylobacter jejuni (n=3; 13.0%), Mycoplasma pneumoniae (n=3; 13.0%), and an unknown source (n=11; 47.8%). Etiologies such as Campylobacter jejuni, EBV, CMV, Mycoplasma pneumoniae, and HIV that have been linked to GBS (19) were not determined in either of our patients, but antecedent infection was identified by taking a detailed and precise history. Notably, none of the Japanese patients with respiratory failure had antecedent EBV infection (Table 2).

Initial symptoms seemed to be varied, but the most frequent upon presentation were non-specific and comprised pyrexia (n=6; 26.0%), diarrhea (n=5; 21.7%), and limb muscle weakness (n=4; 17.4%), followed by paralysis or numbness of the limbs (n=4; 17.4%), dysarthria (n=2; 8.7%), and dyspnea (n=2; 8.7%) possibly due to bulbar palsy (Table 3). Our data suggested that physicians should search for specific initial symptoms such as upper respiratory tract infection and diarrhea associated with antecedent infection during a diagnostic time frame of 5 to 46 days. The diagnostic duration for our patients was identical to that reported (20), but to the best of our knowledge, this is the first study to focus on Japanese patients. 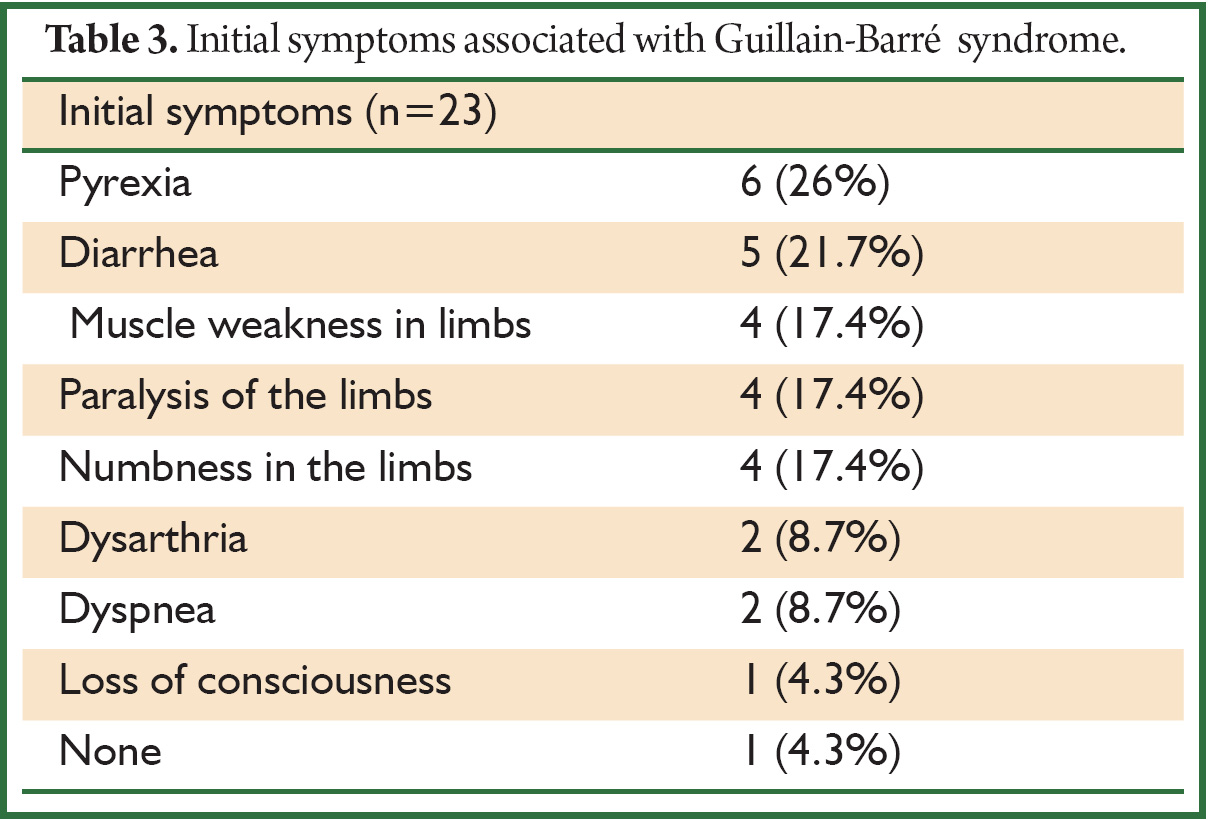 Notably some patients had back pain that might have been derived from root inflammation (2,8,20), and ascending weakness is the rule, with the lower limbs being initially affected followed by the upper limbs (2), as in our patients. Furthermore, initially retained reflexes that disappear in patients with established disease (20) also comprises a clinical clue to a diagnosis of GBS. Relatively symmetrical and bilateral muscle weakness in the limbs progresses over a period of 12 hours to 28 days before reaching a plateau (1), but botulism and viral myositis can also present with weakness that rapidly progresses over periods of hours to days, and these should be differentiated from GBS.

We found a GBS recurrence rate of 8.7%, which agreed with the reported incidence of around 7% (1). Kuitwaard et al. reported that mildly affected patients <30 years of age are at higher risk for recurrence (21), but one of our patients was 74 years old.

The clinical course of GBS was typical in the patient described herein as Case 1, with obvious changes in tidal volume. Red flags that signal a need for endotracheal intubation are a rising respiratory rate, falling forced vital capacity (FVC) (20 mL/kg) (20), and vital capacity (VC) <20 mL/kg (2) or 15 mL/kg (22) as well as clinical findings of bulbar dysfunction presenting as aspiration pneumonia, atelectasis, dysarthria and/or asphyxiation. Although VC or FVC can be reliable markers for assessing risk for mechanical ventilation, they cannot usually be measured at bedside. Moreover, peak flow measurements and pulse oximetry are inadequate markers. Thus, our findings emphasize the importance of taking a detailed history to identify even non-specific symptoms that arise within one to four weeks before patients seek medical help.

Although our results might not be clinically representative of all patients with GBS, our findings suggested that initial symptoms accompanied by non-specific features such as pyrexia, diarrhea and ascending muscle weakness within the most recent 5 to 46 days could be clinical clues to a diagnosis of GBS even in the setting of respiratory failure.