Oncologists should evaluate a patient’s exact cancer status when managing esophageal cancer, especially when planning surgery (1). Positron emission tomography computed tomography (PET-CT) has been essential to the evaluation of exact cancer status, especially distant or lymph node (LN) metastases, in esophageal cancer (1-3). Because 18Fludeoxyglucose (18FDG, a radiopharmaceutical for PET-CT) uptake in tissues is a marker for the tissue uptake of glucose, which is in turn closely associated with tissue metabolism, correlations between the maximum standard uptake value (SUVmax) in the lesions and cancer progression are well known (1,3,4). Neoadjuvant therapy (NT) is usually recommended in esophageal cancer when the preoperative clinical stage is T3N1 or greater (5-7). A lesion is usually considered to be positive for malignancy when the SUVmax via PET-CT is more than 2.5 and the lesion is larger than 1 cm in diameter (8,9). However, discrepancies between PET-CT and pathologic findings are common, especially in regional LN status. Thus, preoperative evaluation using PET-CT might provide unreliable information and influence the management plan for esophageal cancer (4,5,10). No definitive findings or established guidelines have been published for the evaluation of esophageal tumors (tumor) and regional LN using PET-CT in patients with esophageal cancer (2,7,8,10). In addition, it remains unclear whether PET-CT findings vary between patients treated with and without NT (2,11). The purpose of the present study is to clarify any variation in PET-CT findings between esophageal cancer patients treated with and without NT and to predict LN metastases for better prognosis.

We retrospectively compiled and analyzed data from 192 consecutive patients who had undergone curative and complete surgery for intra-thoracic esophageal cancers at a single tertiary Korean hospital from January 2009 to December 2014. Inclusion criteria were complete and curative surgery cases, intra-thoracic esophageal cancer, PET-CT acquisition for initial evaluation and re-evaluation after NT, and preoperatively proven histology of squamous cell carcinoma. Exclusion criteria were palliation or salvage cases, other uncured previous or current primary cancers, and concurrent active inflammation cases. The preoperative assessments included esophagogastroduodenoscopy, esophagography, chest CT, abdominal CT, PET-CT, endoscopic ultrasound, and bone scan. NT and adjuvant therapies were performed following the National Comprehensive Cancer Network (NCCN) guidelines; the recommendations of a multidisciplinary team who assessed cancer status, resectability, or operability; and each patient’s condition (5). NT usually consisted of two cycles of cisplatin and 5-fluorouracil, plus 25 fractions of radiation therapy (over 5 weeks) to a total of 41–45 Gray. Re-evaluation by PET-CT was performed 4 weeks after completion of NT, and further management was determined. The surgery was performed 5 or 6 weeks after completion of NT. In the present study, preoperative stage in neoadjuvant cases was defined as clinical stage by PET-CT reevaluation after NT and before surgery. Surgeries were performed by two surgeons using the Ivor Lewis or the McKeown procedures, depending on cancer status and patient condition. Two-field LN dissections were performed. We retrospectively compiled PET-CT SUVmax data on tumors and LNs. To clarify the different findings between NT and non-neoadjuvant therapy (non-NT) group and to predict LN metastases, we assessed the relationship between SUVmax values and pathologic stage, compared disease-free survival (DFS) and overall survival (OS), investigated the relationship between tumor and LN SUVmax values, evaluated and predicted LN metastases using SUVmax values, compared pathologically negative and positive LNs using SUVmax values, and examined the effects of NT on SUVmax. Those findings were analyzed in the context of the pathologic findings. We analyzed the histopathological findings of specimens using the multiple serial sectional and immunohistochemistry methods and determined cancer stage according to the seventh American Joint Committee on Cancer (AJCC) staging system.

Protocol for PET-CT measurements and evaluations

All subjects gave written informed consent before PET-CT measurement for the possible future use of their clinical evaluations in research. Subjects fasted for at least 6 h before their PET-CT scans, and their blood glucose levels were measured before injection of 18FDG, a radiopharmaceutical. If blood glucose level was greater than 160 mg/dL, the scan was postponed. An hour after the injection of 18FDG (dosage 0.2 mCi/kg), positron emission images were acquired from the orbitomeatal plane to the proximal thigh. A CT scan was acquired concurrently with positron emission scans for exact anatomic localization of any 18FDG-avid lesion. SUVmax calculated by identifying the region of interest on an axial slice with the highest uptake of 18FDG within a lesion, was used to present the uptake of 18FDG within a lesion. Two nuclear medicine physicians independently evaluated the SUVmax values for each scan. Medical records were also reviewed to discriminate malignancy or metastasis from a nonspecific 18FDG-avid lesion. We compiled the SUVmax values as the highest uptake of 18FDG within a tumor and individual LN later pathologically dissected and confirmed. We defined LN SUVmax as the highest SUVmax value among all pathologically dissected and confirmed LNs. Tumors and LNs were regarded as positive for malignancy or metastasis when the SUVmax value was >2.5 on a PET scan and the size was >1 cm on a CT scan, following previous studies and our hospital policy (8).

Due to non-normal distribution of data, we used non-parametric statistical hypothesis tests. The comparisons among subgroups were evaluated using the Mann-Whitney U or the Jonckheere-Terpstra test after propensity score matching methods, if needed. We used the Wilcoxon signed rank test when comparing two matched data and evaluated comparisons for categorical variables with the χ2 test or Fisher’s exact test, as appropriate. Association studies were evaluated using the Spearman’ rho test, and survival analyses were performed using Kaplan-Meier survival estimation, with the log-rank test used to search for differences in survival across these strata. We performed receiver operating characteristic (ROC) analysis for diagnostic evaluation. We used the Statistical Package of Social Sciences version 22.0 (SPSS, Chicago, IL, USA) for all analyses. A P value <0.05 was considered statistically significant. The present study was approved by the Institutional Review Board of Seoul St Mary’s Hospital (Approval number: KC15RISI0763).

The relationship between SUVmax and pathologic stage, and other various factors 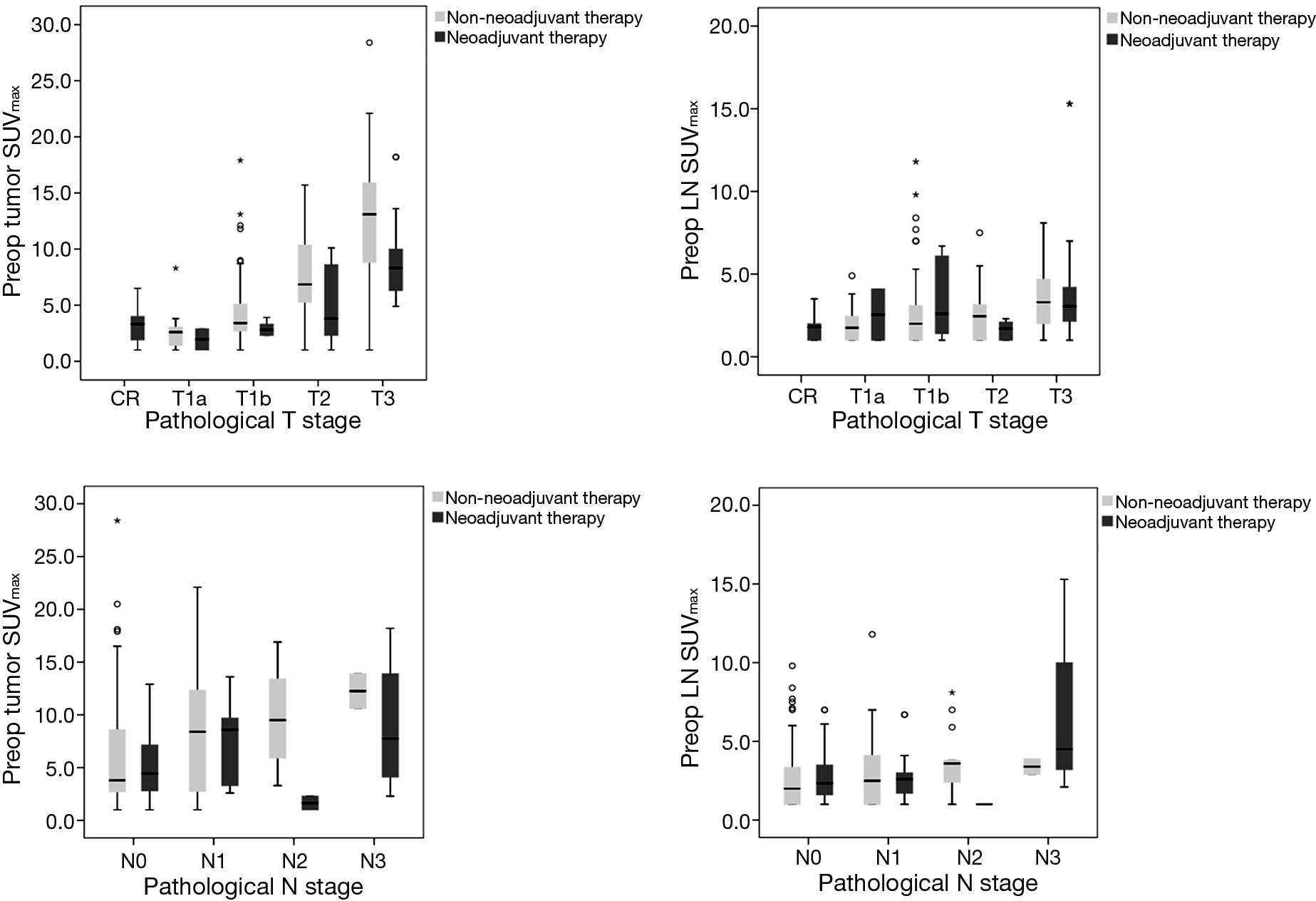 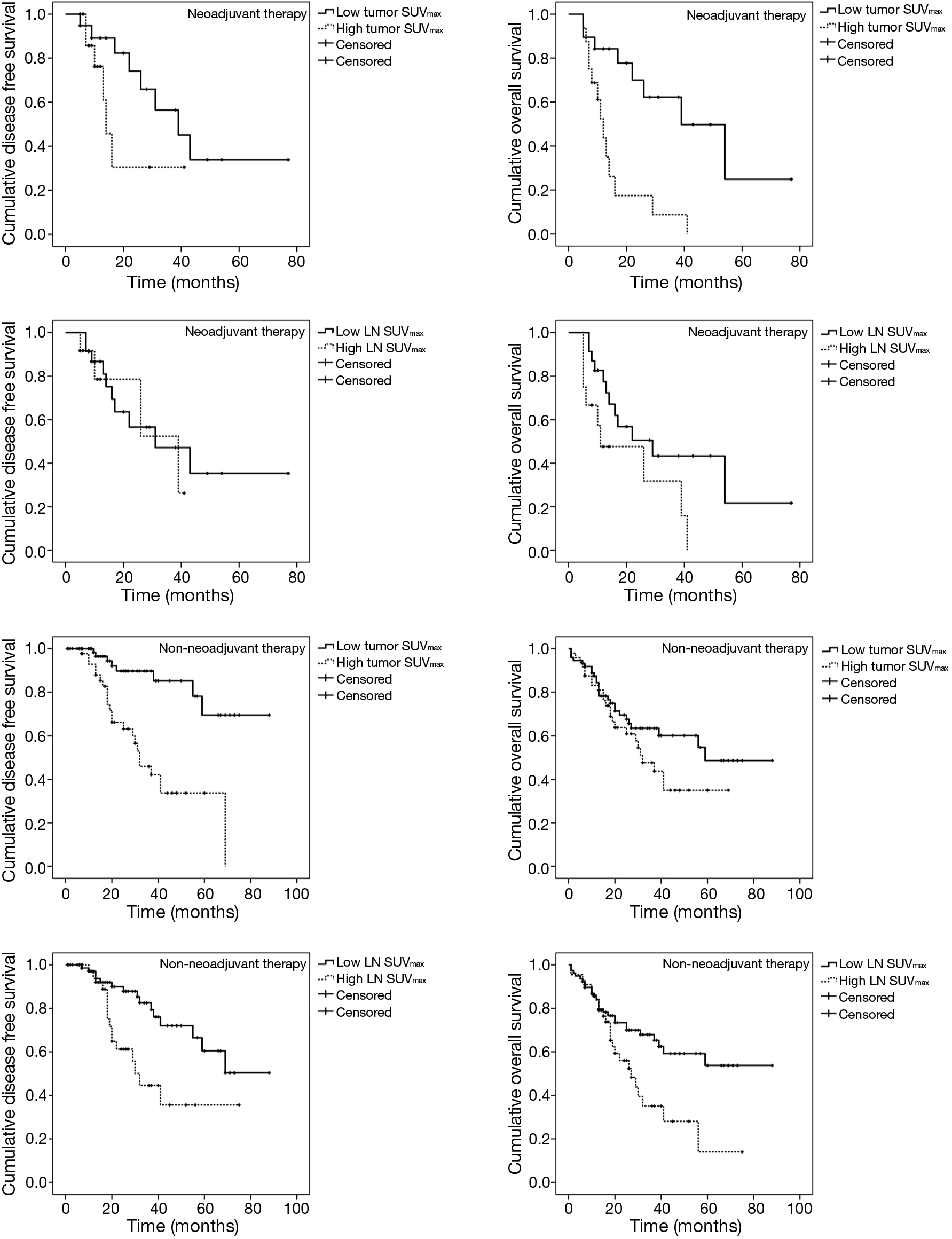 The relationship between tumor and lymph nodes (LN) SUVmax 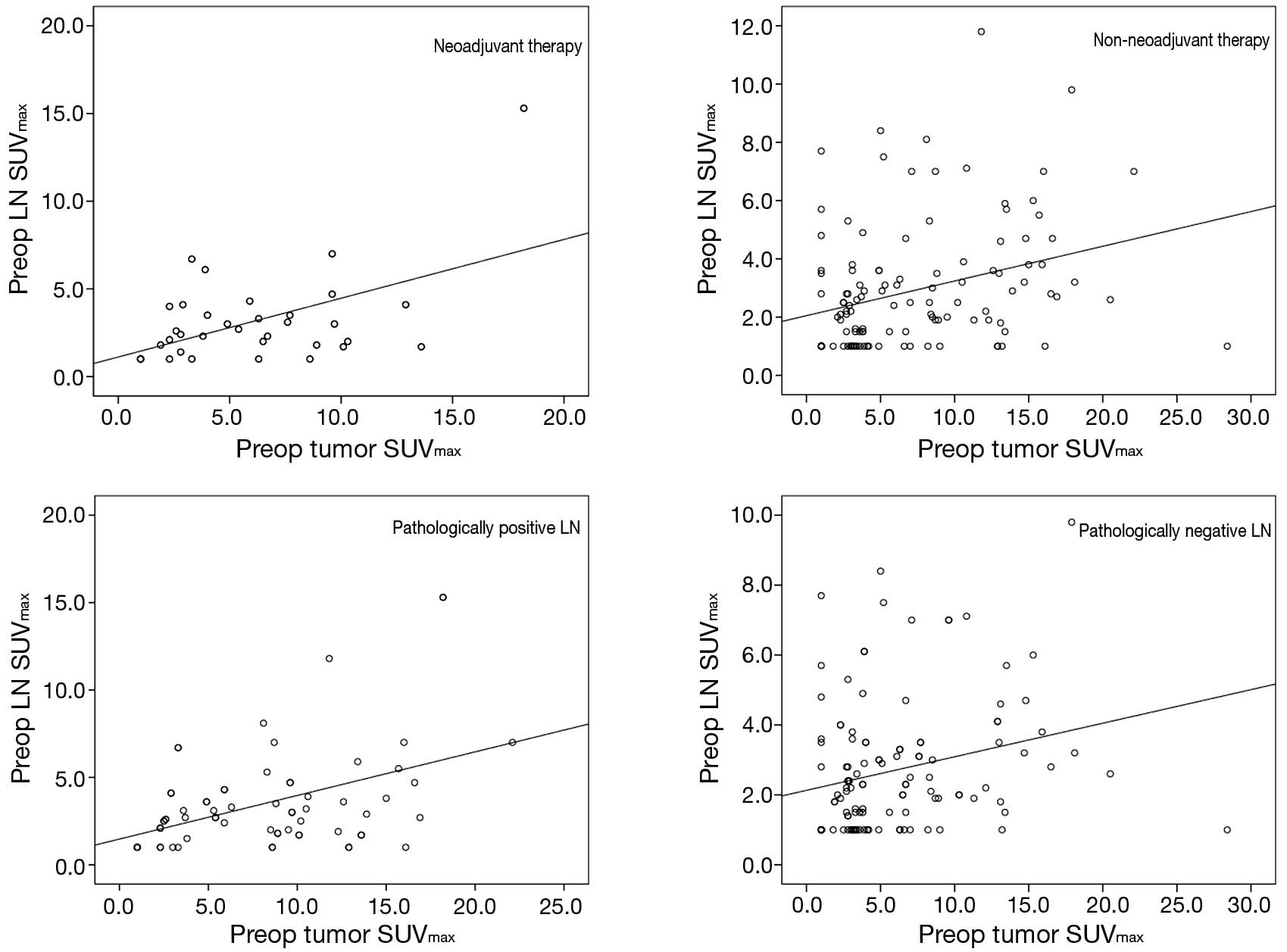 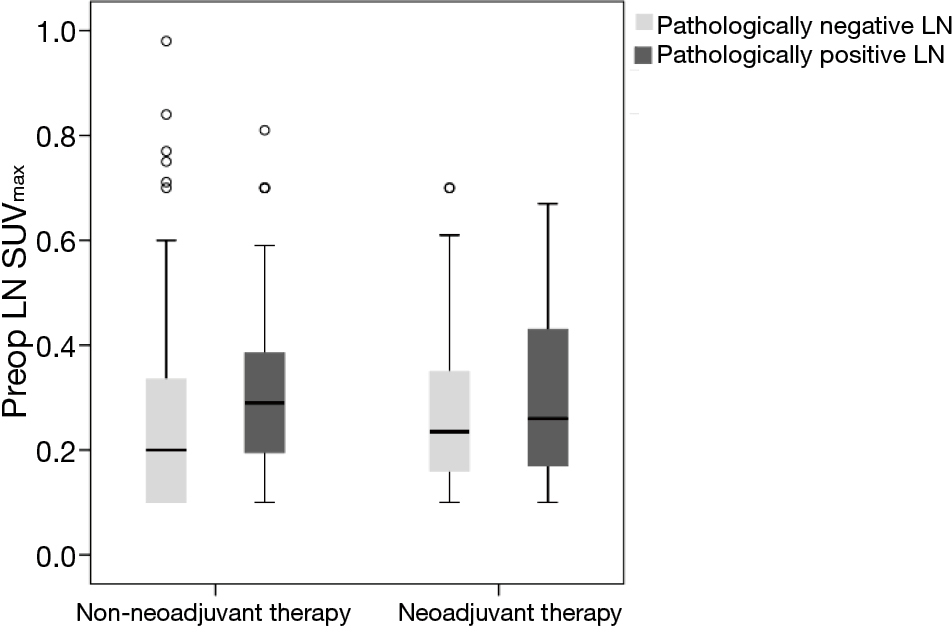 PET-CT has become an essential tool to assess exact cancer status, especially distant or LNs metastases in esophageal cancer (1). Most thoracic surgeons will consider NT instead of prompt surgery as initial management for esophageal cancer if a preoperative evaluation using PET-CT reveals possible LN metastasis (5). PET-CT thus promotes appropriate decisions in managing esophageal cancer by providing qualitative and quantitative information about a lesion by measuring its metabolic activity (4,5). However, discordance commonly occurs between PET-CT and pathologic findings, especially in LN status (1,3,8). In addition, the assessment of LN status using PET-CT in patients with esophageal cancer varies by institute because no established findings or qualitative features of PET-CT have been published (2,7,8). To clarify PET-CT findings in esophageal cancer, we investigated the different findings of PET-CT between NT and non-NT, especially in assessment of LNs for surgery, from the viewpoint of a thoracic surgeon. For the purposes of this study, we considered a lesion to be malignant or metastatic when its SUVmax was >2.5 and its size on CT scan was >1 cm (8).

Many studies have investigated the effects of NT in terms of predicting LN metastases based on the SUVmax of the primary lesions and have shown success in conditions such as hepatocellular carcinoma, breast cancer, and lung cancer (10). We showed that when LN SUVmax was higher than tumor SUVmax, the LN was considered to be benign regardless of SUVmax in non-NT and that predicting LN metastases based on the SUVmax of primary lesions was possible only in non-NT. Using SUVmax values of primary lesions to predict LN metastases was difficult in NT (3,4), probably because of the various effects of NT on tumor and LN (9). Therefore, to predict LN metastases for better diagnostic accuracy and prognosis, we attempted to find new findings for NT cases using esophageal tumor SUVmax. We found that if the tumor SUVmax was higher than the LN SUVmax and was higher than the value of 2.5, it was possible to diagnose LNs using the value of the tumor SUVmax. However, if the tumor SUVmax was ≤2.5, it could not provide an appropriate diagnosis value for LN metastases. We attribute this result to the assumption that FDG uptake in more advanced esophageal cancers provides better diagnostic accuracy because FDG uptake of the primary lesion is positively correlated with that of LN (10,13).

In summary, the present study showed similar and different PET-CT findings between NT and non-NT in esophageal cancer. The similar findings pertain to the relationship between T stage and SUVmax, DFS and OS, the relationship between tumor and LN SUVmax, and the relationship with various factors (chronic lung disease, age, history of previous other primary cancer, and sex). The different findings pertain to the relationship between N stage and SUVmax, assessment of LN metastases, and any difference in SUVmax between pathologically positive and negative LN. Some studies reported that preoperative staging using PET-CT shows no survival benefit and no improvement in early recurrence following surgery (15-18). We suggest with caution that surgery should not be withheld only due to preoperative N stage using PET-CT after NT because there is no clear method for evaluation LN status after NT, and PET-CT findings differ between NT and non-NT (4). Further large-scale studies about PET-CT findings in NT are needed to draw definitive conclusions or establish guidelines for the use of PET-CT to diagnose patients with esophageal cancer.

The present study has several limitations, including its retrospective and single center design, small sample size and selection bias, and the shine-through phenomenon. Because the present study included only surgical cases, it mostly consisted of early-stage esophageal cancer, thereby reducing the incidence of LN metastases, which might affect the preoperative assessment (13). The small number of NT cases and the heterogeneity of the data could have affected the study findings. To overcome that bias, we used the propensity score matching method to compare NT and non-NT. Because the measurement of the metabolic activity in a lesion by PET-CT involves considerable variability in conditions, various factors can influence the SUVmax level, especially in early-stage esophageal cancer (13,18). In addition, interpreting SUVmax data using only empirical and quantitative standardization can influence the preoperative assessment, especially in the early stages (8,13,18). The findings from the present study should be confirmed with prospective, randomized studies to provide definitive findings or establish guidelines for the use of PET-CT for the preoperative evaluation of the patients with esophageal cancer. Presently, because we regard evaluation of LNs by SUVmax to not be fully reliable, we chose prompt surgery instead of initial NT in a significant number of cases with preoperative high N stage according to PET-CT findings. To the best of our knowledge, the present study is the first and systematic comparison of PET-CT findings between NT and non-NT.

Cite this article as: Park JK, Kim JJ, Moon SW. A study about different findings of PET-CT between neoadjuvant and non-neoadjuvant therapy: SUVmax is not a reliable predictor of lymphatic involvement after neoadjuvant therapy for esophageal cancer. J Thorac Dis 2016;8(5):784-794. doi: 10.21037/jtd.2016.03.20