This was a 10-year-old boy who had coarctation of the aorta with the clinical presentation of hypertension. On physical examination, there was a 3/6 grade systolic murmur in the 2nd intercostal of right parasternal area. Transthoracic echocardiography showed coarctation of the aorta with a pressure gradient of 104 mmHg. Other findings included pulmonary hypertension with a systolic pressure of 47 mmHg, severe mitral regurgitation and mild aortic regurgitation. Computed tomographic angiography of the aorta confirmed the coarctation measuring approximately 15 mm long just after the innominate artery with large collateral circulation. It was further revealed that the stenosis of innominate artery was 15 mm away from the origin, with a tiny right subclavian artery and a broadened right common carotid artery. It also illustrated agenesis of left common carotid artery and left subclavian artery (Figure 1). The diameters of descending aorta, the stenosis segment of innominate artery, right common carotid artery and right subclavian artery measured 6.7, 2.1, 15 mm and 5 mm, respectively. Computed tomographic angiography of the coronary showed no abnormality. 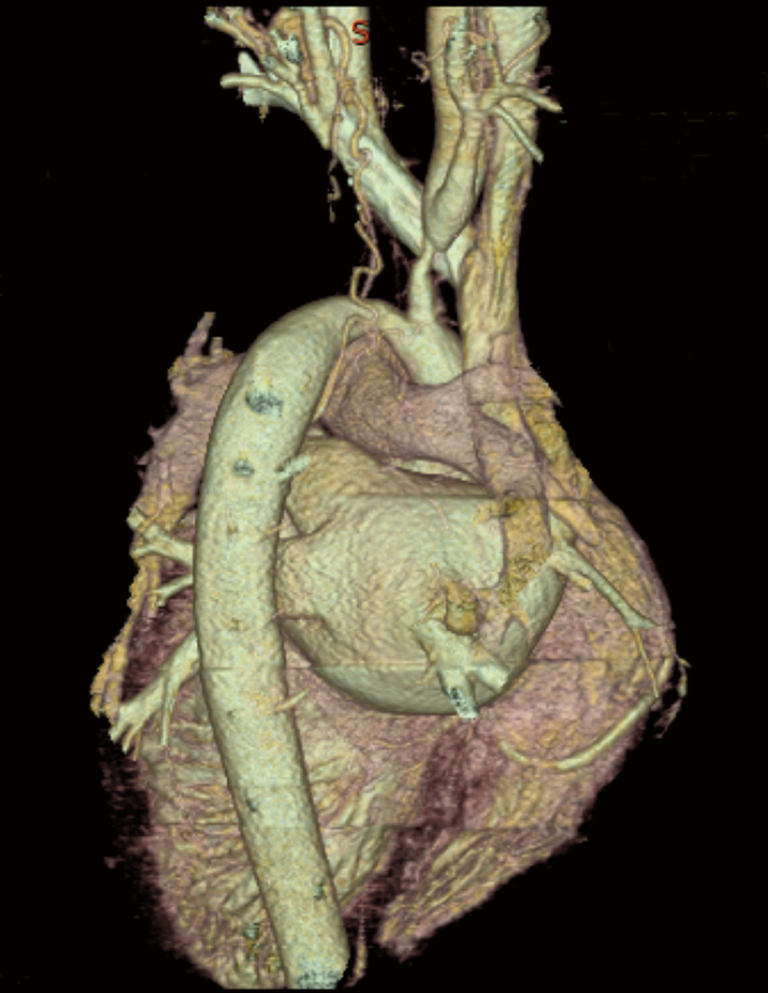 The patient underwent surgical repair through a midline sternotomy. The pericardium was incised longitudinally along the aorta for exposition. After partially clamping the descending aorta, we anastomosed a 14-mm prosthetic graft (Vascutek Deutschland GmbH, Hamburg, Germany) end-to-side using a running 4-0 polypropylene suture. Then the graft was routed into the left pleural space passing above the pulmonary artery and directed to the ascending aorta. The proximal anastomosis was performed in the same end-to-side manner as the distal anastomosis using a partial occluding clamp. Then we interposed an 8 mm prosthetic graft bypass (Vascutek Deutschland GmbH, Hamburg, Germany) between the right subclavian artery and the ascending-to-descending aortic bypass graft (Figures 2,3). The patient was weaned from the ventilator 2 days after the surgery and was discharged from the hospital 8 days postoperatively without any complications. At 1-year follow-up, the patient recovered well and transthoracic echocardiography showed no arterial hypertension, no obstruction or stenosis of the prosthetic grafts and no valve regurgitation. 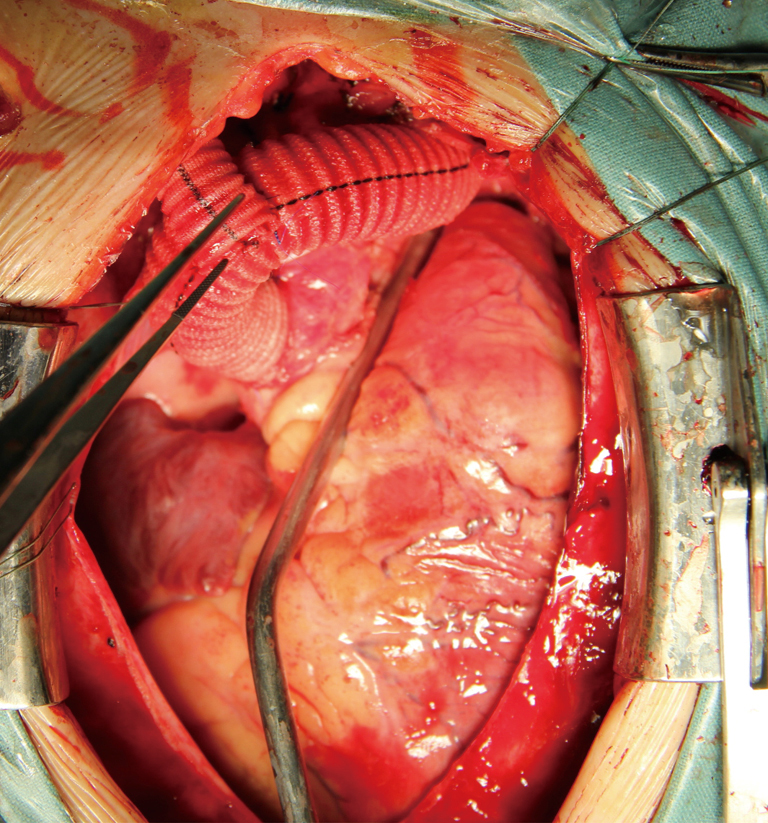 Figure 2 Intraoperative view of the ascending-to-descending aortic bypass graft and bypass graft between right subclavian artery and the established graft. 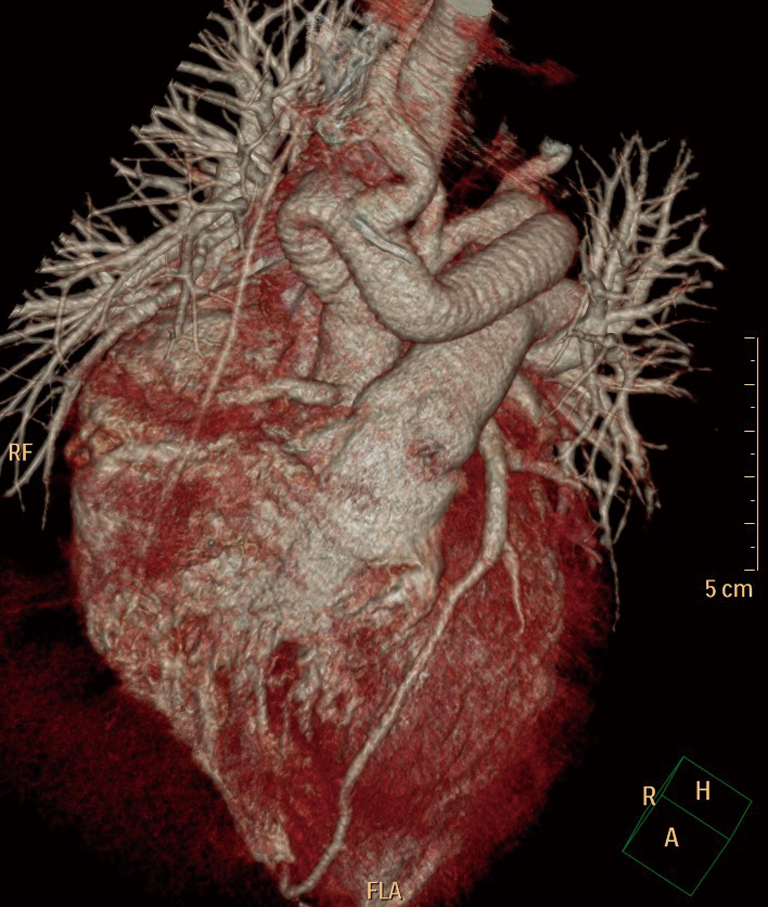 The cause of the agenesis may be contributed to mechanical and hemodynamic stresses over the embryo, with exaggerated folding of embryo toward one side and constriction by amniotic band (2). Despite the agenesis, our patient remained asymptomatic due to the collateral circulation from the contralateral common carotid artery, homolateral collateral branches and vertebrobasilar system through the circle of Willis.

In treating coarctation, the reconstruction techniques include end-to-end anastomosis, patch angioplasty, interposition graft and extraanatomic bypass. Among all the techniques, extraanatomic bypass are used more frequently in older patients and shows low morbidity and mortality (3). We also considered a direct approach on the arch. However, the patient’s poor constitution with pulmonary hypertension (approximately 47 mmHg) indicated that he was unable to tolerate such surgery. In our case, we performed extraanatomic reconstruction by using prosthetic grafts. Although the graft suffered the disadvantage of not having growth potential, the patient was old enough to undergo the operation. We interposed a graft between the ascending and descending aorta, which provided a safer solution to the coarctation and was effective in relieving aortic gradient and improving systematic perfusion. We also revascularized the right subclavian with another graft from the interposition graft to the distal right subclavian. In most cases, the vascular graft was placed around the right margin of the heart. However, some surgeons prefer the pathway through the left pleural space. First, the pathway has less chance of graft compression. Second, it can facilitate redo cardiac surgery, avoiding extensive dissection of the adherent graft from the right atrium and right ventricle.

When using the side-biting clamp, we maintained the pressure of femoral artery higher than 40 mmHg to guarantee adequate spinal cord and distal perfusion, instead of application of extracorporeal circulation machine. In order to maintain hemodynamic stability, we exposed the descending aorta with special care and performed the distal anastomosis at the mid-descending aorta. The off-pump approach avoids complications associated with cardiopulmonary bypass. The postoperative paraplegia has been reported in patients who underwent reoperation for recurring coarctation, but it is rarely reported in young patients (4).

Our case of off-pump extraanatomic reconstruction demonstrates a feasible and safe surgical solution for coarctation of the aorta accompanied by other rare abnormalities. However, the long term results after surgical treatment of coarctation shows that aneurysms and pseudoaneurysms along with chronic hypertension are major concerns, so close follow-up is essential for further treatment (5).

The authors offer their sincere appreciation to Dr. Theodore Wai Ng for critical review of this manuscript.