Contrast-induced acute kidney injury (CIAKI), which is independently associated with longer hospital stay, hemodialysis if acute renal failure develops, heart failure and high in- and post-hospital mortality (1-4), has an overall incidence of 1-6% (5) that can climb up to 50% in individuals with diabetes mellitus and chronic kidney disease (CKD) (6,7). Risk factors for CIAKI include older age, diabetes mellitus, decreased left ventricular ejection fraction, preexisting renal impairment, and a high volume of contrast medium (7,8); with females being at greater risk than males (9,10).

In the multicenter, randomized TRACK-D study, we reported that periprocedural use of rosuvastatin effectively reduced the risk of CIAKI in patients with diabetes and CKD undergoing coronary/peripheral arterial angiography and percutaneous intervention (11). The benefit of rosuvastatin therapy, regarding CIAKI, was consistently effective among various subgroups, including gender. Given that female is independently predicting CIAKI, detailed gender-based analysis is necessary to elucidate the efficacy of such strategy in female patients. This study investigated the efficacy of short-term rosuvastatin treatment for the prevention of CIAKI in female patients enrolled in the TRACK-D study.

The primary outcome was the development of CIAKI, defined as an increase in serum creatinine concentration ≥0.5 mg/dL (44.2 mmol/L) or ≥25% above baseline at 72 h after exposure to the contrast medium. Secondary outcome was a composite of adverse clinical events at 30 days, including all-cause death, dialysis/hemofiltration or worsening heart failure, defined as a deteriorated NYHA functional class (class change ≥1). The estimated glomerular filtration rate (eGFR) was calculated from serum creatinine (sCr) concentrations by using the modified glomerular filtration rate estimating equation for Chinese patients with CKD (12): eGFR (mL/min/1.73 m2) = 175× (sCr)−1.234 × (age)−0.179 (0.79 if female).

Analysis was performed with SPSS 19.0 software by the Chinese Cardiovascular Research Foundation. Comparisons among normally distributed continuous variables, expressed as mean ± standard deviation, were performed using Student t-tests; non-normally distributed continuous variables, presented as medians and interquartile ranges, were analyzed using Wilcoxon rank-sum tests. The Chi-square or Fisher exact test was used for categorical data, expressed as percentages. Logistic regression analysis was used to calculate odds ratios (OR) for the comparison of CIAKI rates between groups. All P values were 2-tailed, and statistical significance was defined by a P value 0.05. 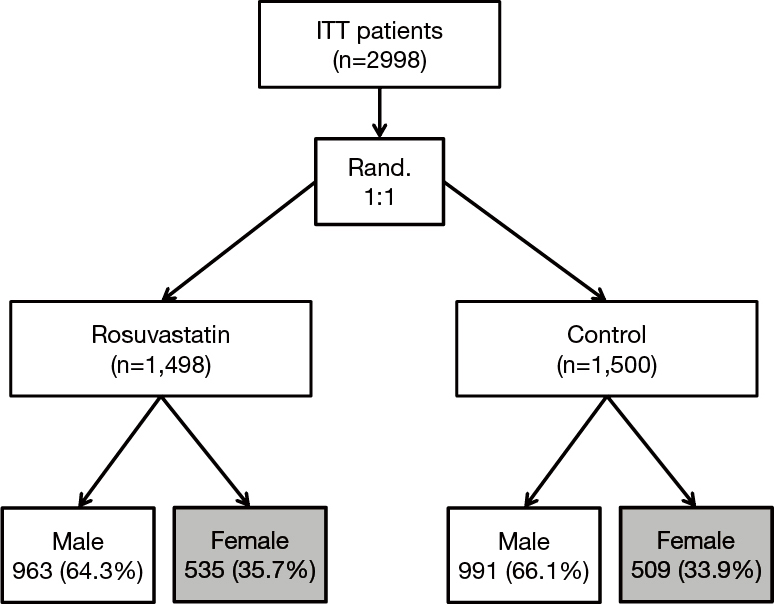 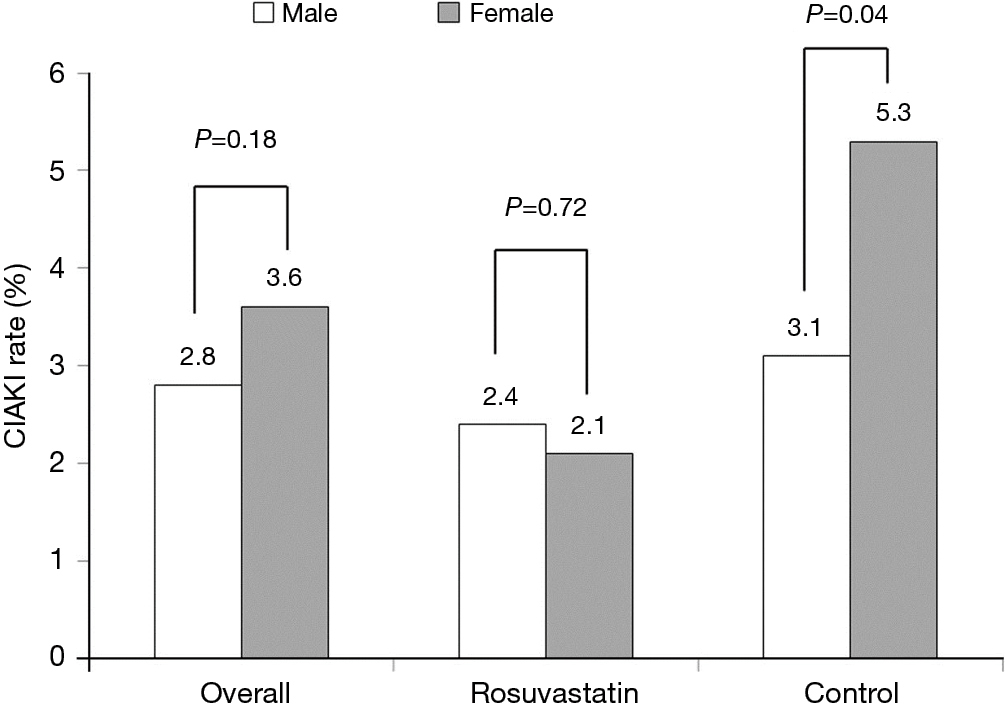 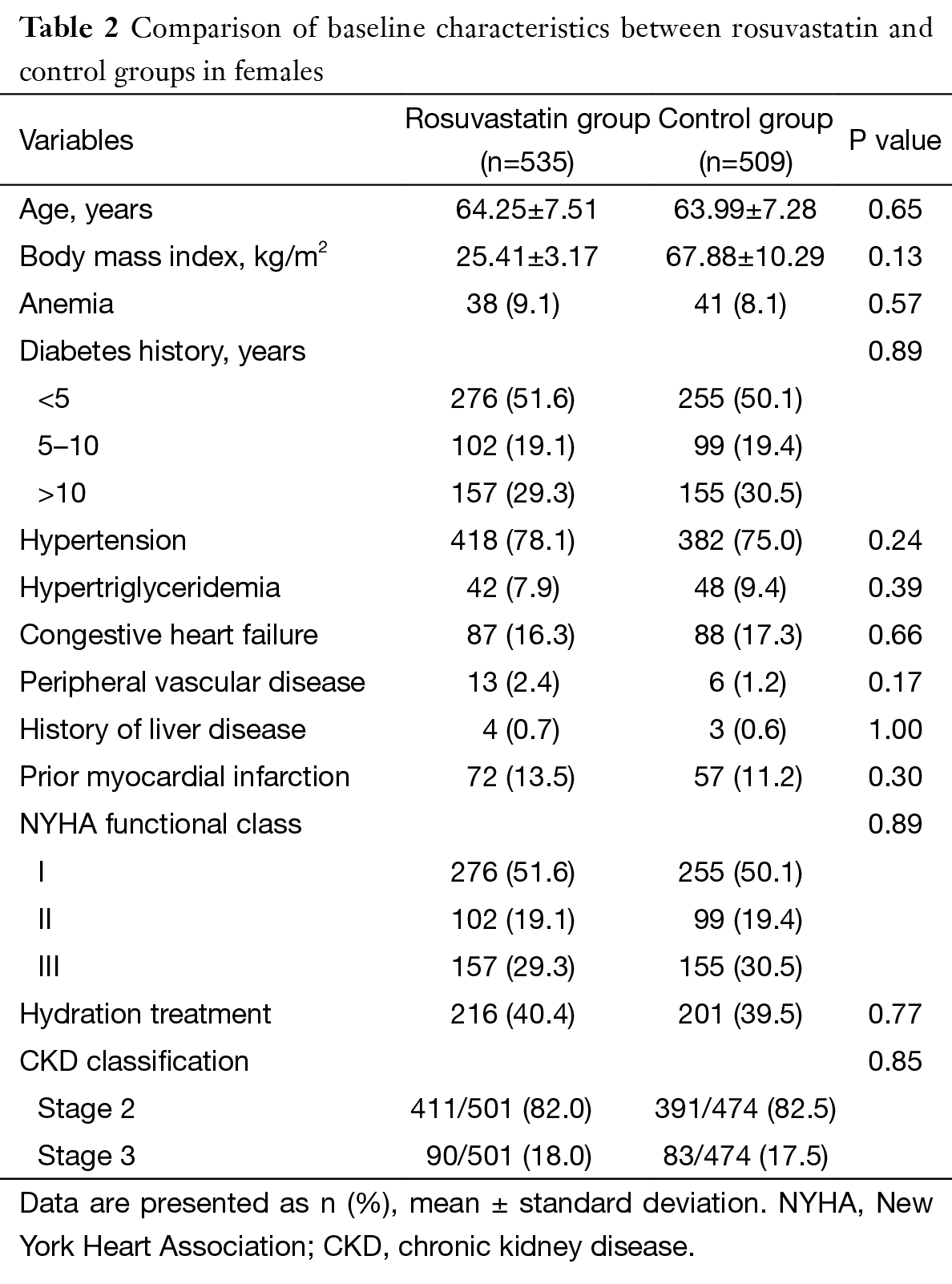 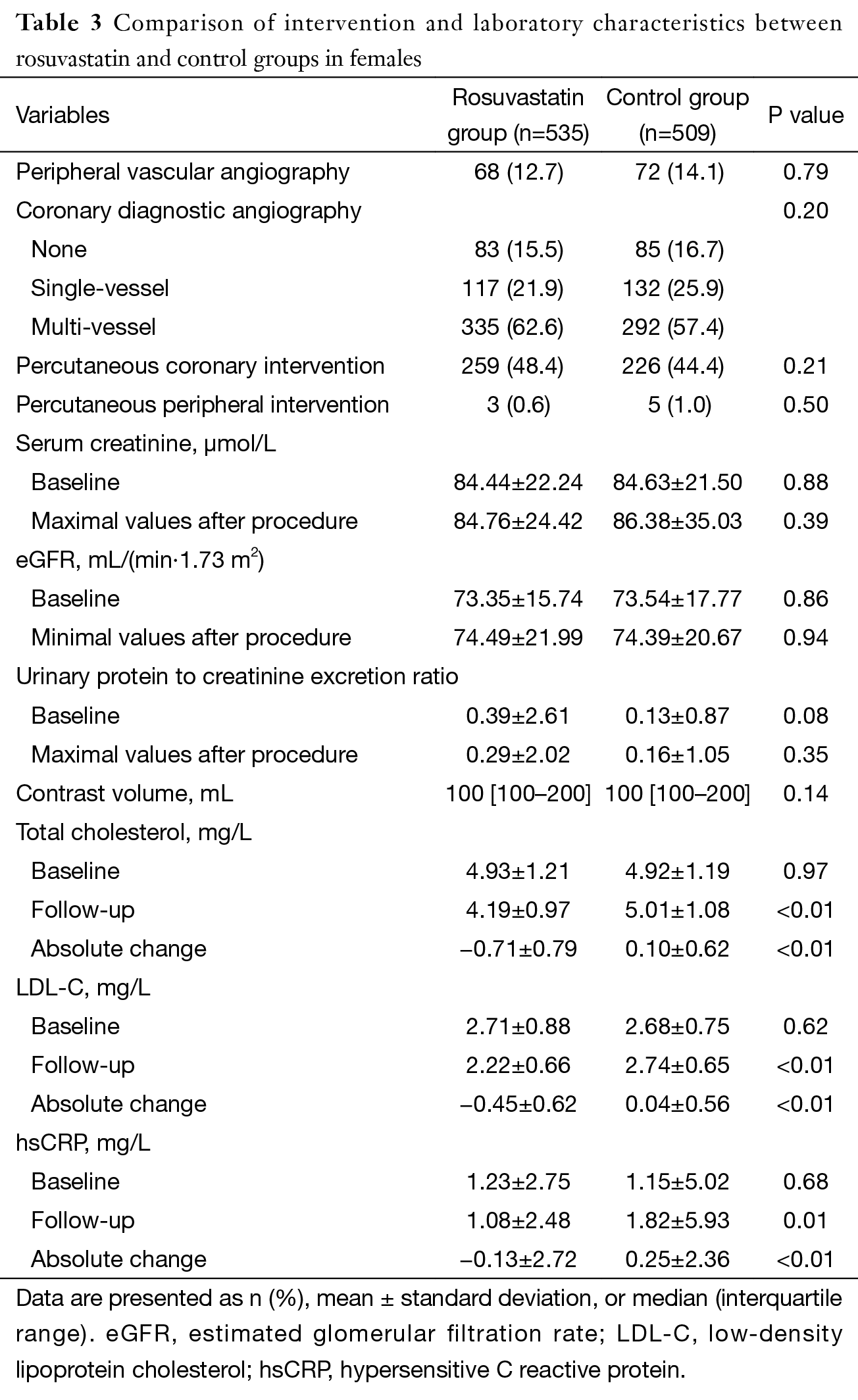 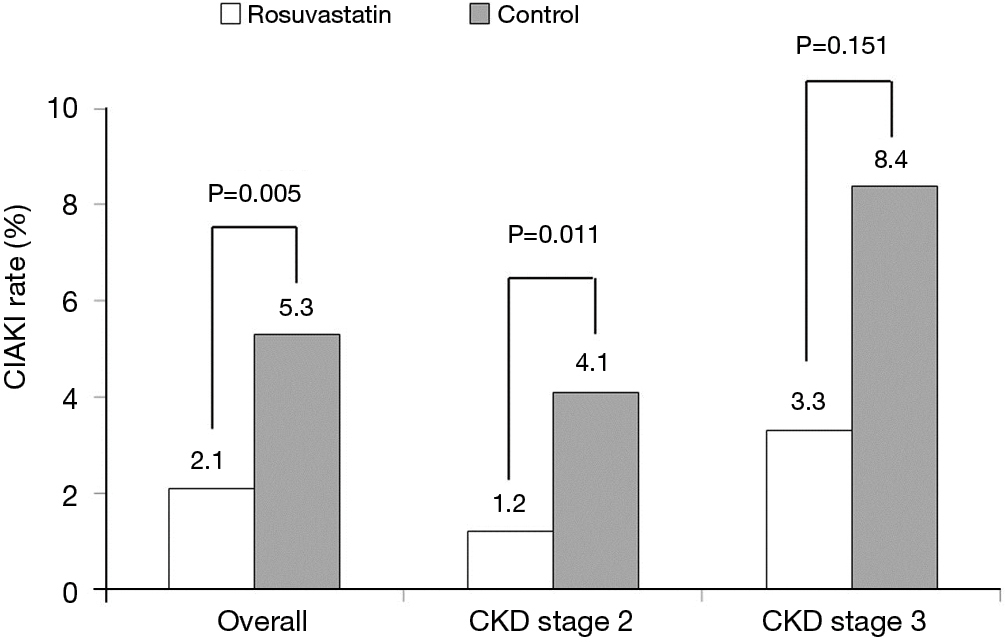 TRACK-D was a prospective, randomized, controlled, multicenter clinical trial performed in China aimed at assessing the efficacy of short-term rosuvastatin to prevent CIAKI in a larger population of diabetic patients with mild to moderate CKD who were undergoing coronary or peripheral arterial diagnostic angiography or percutaneous intervention (11). This gender-based analysis of TRACK-D population showed that females with diabetes and CKD were at higher risk of CIAKI compared to their male counterparts and were benefit from short-term rosuvastatin treatment during peri-operative period of angiography or percutaneous intervention.

Previous studies have suggested that diabetes mellitus, CKD, advanced age, severe heart failure and a high volume of contrast medium were independent predictors of CIAKI (13). Other studies have demonstrated that female gender, with or without CKD, is an independent predictor of CIAKI development after PCI procedure. Compared with men, women have increased cardiovascular mortality, especially after menopause (14). Specifically, in-hospital mortality after coronary angiography is higher in women (15,16), although in these cohorts, women were older and had a greater burden of comorbidity than men (17-19). CIAKI may be a factor in the relatively detrimental hospital course observed in women, although the reason for the higher incidence of CIAKI in women is unknown. Gender-specific responses to renal stimuli by contrast medium and the influence of ovarian hormones are possible explanations (15). Furthermore, older women may have lower intrarenal medullary oxygenation (20), which may be linked to lower intrarenal medullary prostaglandin production (21), a potential risk factor for increased susceptibility to CIAKI. The increased risk of CIAKI in women may be also related to the contrast medium dose, namely a higher ratio of contrast volume to body surface area.

In our study, women were older, more likely anemic and hypertensive, and were treated by hydration less frequently than men, which might be the explanations of the higher incidence of CIAKI in women. However, the increased risk of CIAKI in women persisted after multivariable adjustment for these confounders. Those findings highlight the need to re-assess the efficacy and safety of rosuvastatin in female patients and to make evidence-based decisions in women with higher risk of CIAKI. In the present study, female patients not treated with rosuvastatin had a significantly higher incidence of CIAKI compared with their male counterparts, whereas the CIAKI rates were comparable between male and female patients treated with peri-operative rosuvastatin. The above findings indicated that the effects of rosuvastatin appear to be more pronounced in females. Given few medications have been proven effective as so far, our findings provided a promising and feasible strategy for the management of CIAKI in female patients with diabetes and CKD, who were at high risk of CIAKI. That is valuable to enhance clinical performance in such patient cohort.

Further analysis showed that the beneficial effects of rosuvastatin treatment was more obvious in females with stage 2 CKD but was not significant in those with stage 3 CKD. However, as we shown in the results, stage 3 CKD patients had a comparable RR reduction and even small NNT (20 vs. 31) from rosuvastatin treatment compared with that of stage 2 CKD patients. The most possible explanation of it was the small sample size of stage 3 CKD patients (90 in rosuvastatin group and 83 in control group, respectively). Therefore, it was reasonable to suppose that rosuvastatin is efficacy in both stage 2 and 3 CKD patients. On the other hand, only 10 mg per day rosuvastatin was used in the present study, which was lower than routine dosage reported in studies launched in Western countries. Thus, another possible reason was that the treatment intensiveness might not be enough to overcome the injury caused by worse baseline diseases (CKD stage 3). The validation of above hypothesis needs further confirmation by randomized trial with large sample size.

The mechanism of rosuvastatin in CI-AKI prevention for female patients remains unknown. In the present study, hsCRP level was lower in rosuvastatin treated females as compared to females allocated in the control group, which was consistent to the results from overall TRACK-D population. An increased hsCRP level is known to be associated with CIAKI development. Therefore, rosuvastatin, which also has anti-inflammatory activity, might reduce CIAKI risk by lowering hsCRP level.

Limitations: Data presented in this study were derived from a prespecified but post-randomized analysis. Although baseline characteristics were well matched between the two arms, results should be interpreted with caution due to potential bias caused by underpowered sample size and non-stratified randomization. Moreover, the beneficial effects of rosuvastatin treatment was only significant in patients with CKD stage 2, which might be also caused by underpowered sample size because the difference for CKD stage 3 did not reach statistical significance. Findings of this study warrant confirmation in a randomized clinical trial with larger sample size.