A heterochronic genetic change from an EGFR mutation to an ALK rearrangement in a patient with lung adenocarcinoma: a case report

In patients with lung adenocarcinoma harboring EGFR mutations, treatment with epidermal growth factor receptor-tyrosine kinase inhibitors (EGFR-TKIs) usually becomes ineffective within 12 months (1-3). Various resistance mechanisms to EGFR-TKIs, such as the T790M mutation, MET amplification, and transformation to a small cell phenotype, have been identified, although the resistance mechanism remains unclear in 20% of cases (4). Like EGFR mutations, ALK gene rearrangements are regarded as being mutually exclusive with other driver mutations (5). One mechanism of resistance to the ALK inhibitor crizotinib is reported to involve EGFR activation (6,7). We herein report a rare case of heterochronic genetic changes to an ALK gene rearrangement from an EGFR mutation in a patient with lung adenocarcinoma.

An 87-year-old male never-smoker with adenocarcinoma who had undergone surgery 5 years earlier (revealing a pathological stage IA tumor, consisting of lepidic predominant adenocarcinoma and acinar and papillary adenocarcinoma) was found to have disease progression. The patient received a 5-year outpatient follow-up and no treatment until postoperative recurrence, and the median follow-up interval of chest computed tomography after surgery was 4 months (range, 1–6 months). A positron emission tomography (PET) scan demonstrated that the recurrence was confined to the lung mass in the left lower lobe (sized 17 mm in diameter; SUVmax, 3.85) (Figure 1A) and the bone metastasis in vertebra T7 (SUVmax, 4.36). As EGFR mutation analysis of surgically resected, archived tumor tissue revealed a deletion in exon 19 (Del 2235-2249) without ALK gene rearrangement (Figure 1B,C), he was treated with 250 mg oral gefitinib once daily. However, after 9 months of treatment, the lung tumor in the left lower lobe was found to have progressed (Figure 2A). A bronchoscopic rebiopsy was performed to evaluate resistance mechanisms to gefitinib, which revealed lung adenocarcinoma with wild-type EGFR genes and a new ALK gene rearrangement (Figure 2B,C). ALK gene rearrangement was confirmed both by immunohistochemistry (5A4; Nichirei Biosciences Inc., Tokyo, Japan) and by fluorescence in situ hybridization using break-apart probes (LSI Medience Corporation, Tokyo, Japan). Based on these findings, he started receiving 300 mg alectinib twice daily and achieved a partial response within 4 weeks (Figure 2D). At present, he is being treated with alectinib over a period of 8 months with no major adverse events. 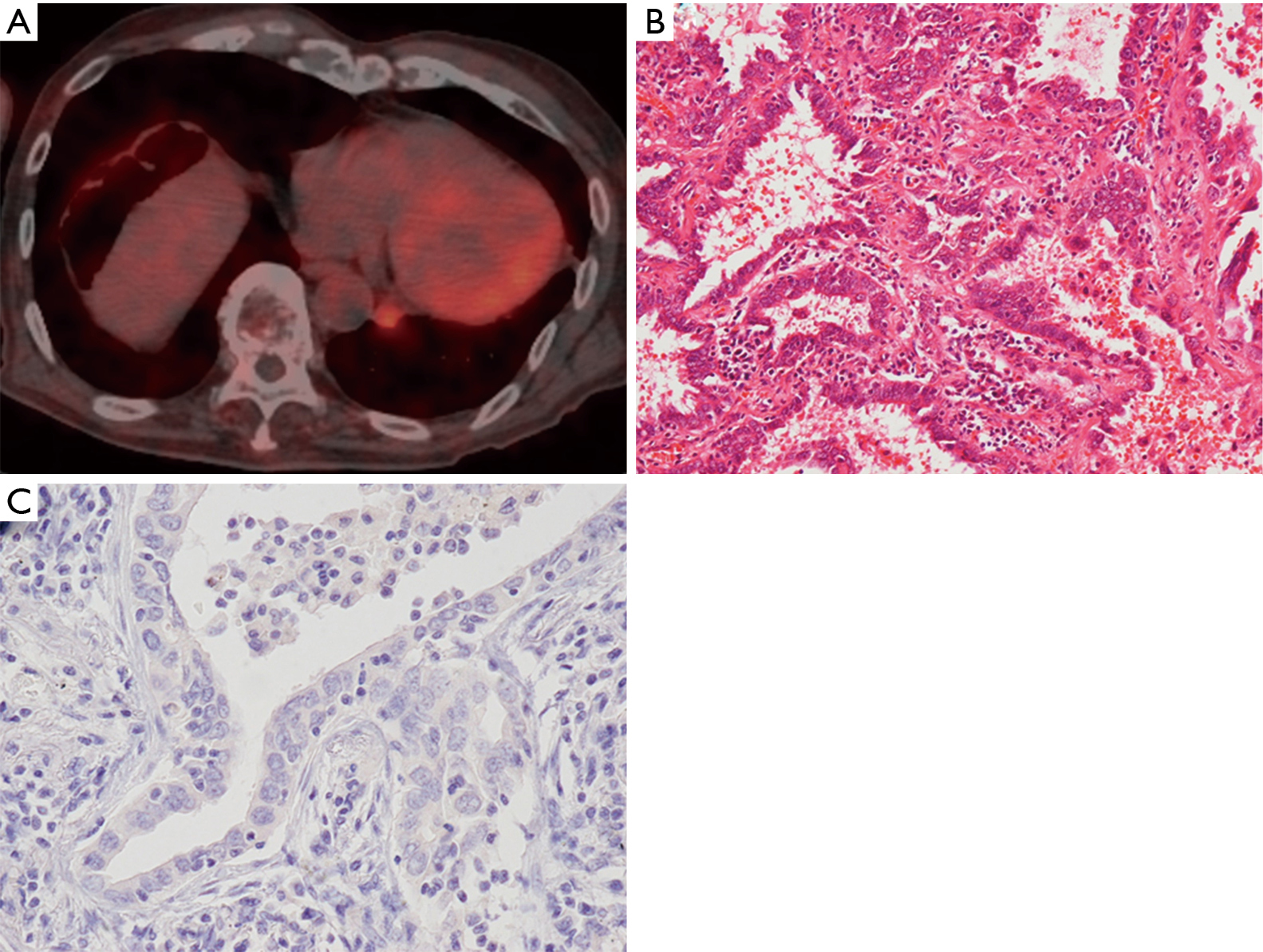 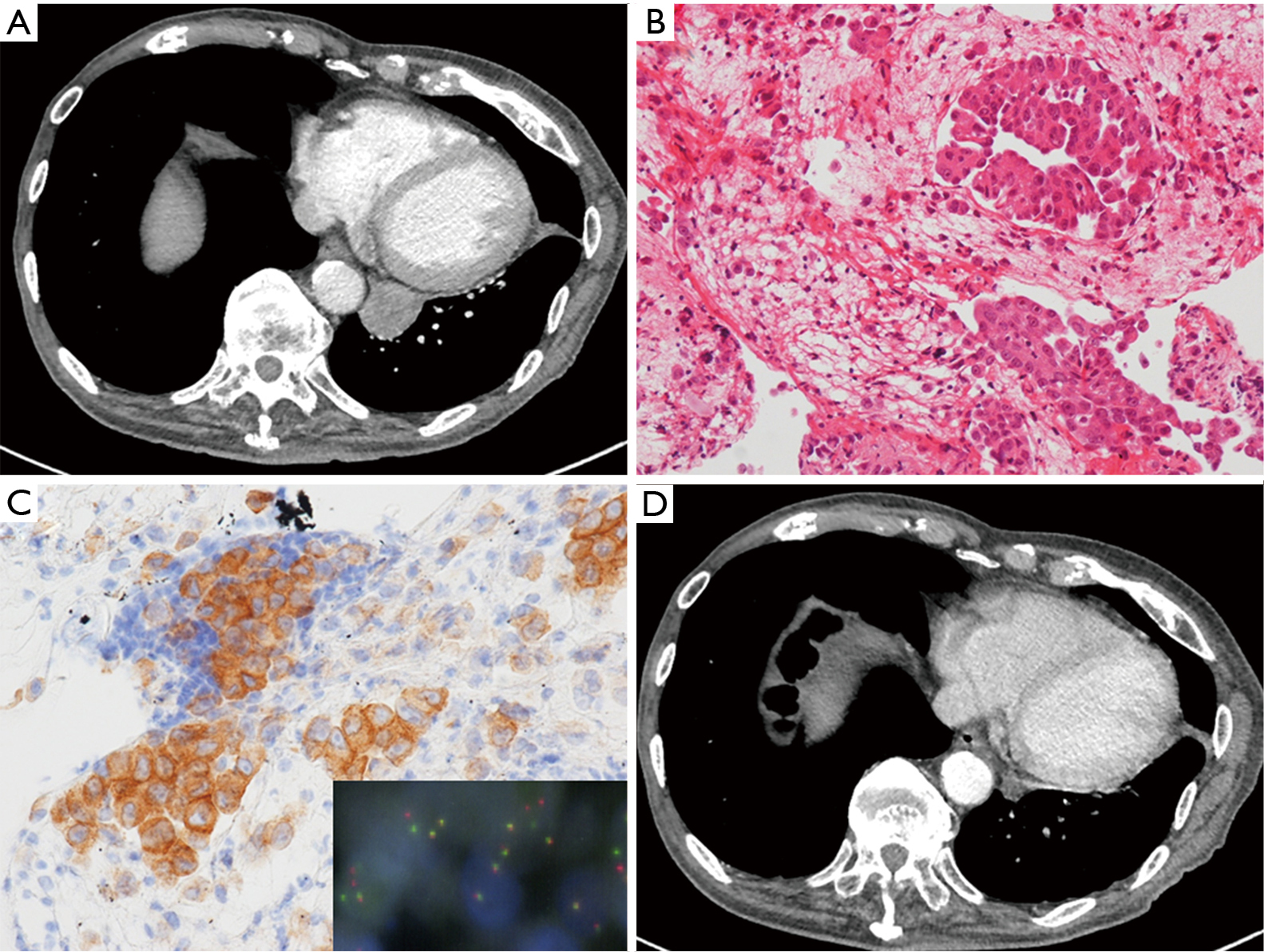 Figure 2 (A) The lung tumor in the left lower lobe was found to be enlarged when disease progression was confirmed after gefitinib treatment; (B) lung tissue obtained by bronchoscopic rebiopsy (HE stain, magnification, ×400); (C) ALK immunohistochemistry showing expression of ALK in lung tissue obtained by bronchoscopy (magnification, ×400). ALK gene rearrangements appear as separate red and green signals; (D) the lung tumor had shrunk remarkably after 4 weeks of alectinib treatment.

We herein report a case of heterochronic genetic changes from an EGFR mutation to an ALK gene rearrangement in a patient with lung adenocarcinoma. In almost all patients with tumors harboring EGFR mutations, treatment with EGFR-TKIs initially induces dramatic responses, with progression of cancer after a median of 6–12 months (1-3). In our case, after 9 months of treatment with gefitinib, rebiopsy of the metastatic lung tumor revealed a newly emerged ALK gene rearrangement. We think this case involved a recurrence pattern rather than a new primary lesion for the following reasons. First, the median interval of follow-up by chest computed tomography after surgery was 4 months (range, 1–6 months), which would probably not allow enough time for a new primary lung cancer with bone metastasis to emerge. Second, this case does not meet the Martini and Melamed criteria (8) for diagnosing a second primary lung cancer as the original lung cancer surgically resected 5 years previously was not from carcinoma in situ and there was an extrapulmonary metastasis at recurrence. Third, the tumor initially responded to both gefitinib and the ALK inhibitor alectinib. We therefore considered that heterochronic genetic changes from an EGFR mutation to ALK gene rearrangement occurred. A related, but better characterized and more common phenomenon is the development of resistance to the ALK inhibitor crizotinib through the activation of EGFR (6,7). This phenomenon might indicate an association between secondary kinase mutations and resistance to TKIs. In a similar case to that reported here, Sun and colleagues found that a patient initially found to have EGFR mutant lung adenocarcinoma subsequently developed EGFR wild type disease with ALK gene rearrangement, as noted on rebiopsy (9). This change in mutation status might therefore be related to EGFR-TKI resistance, although the heterogeneity of lung cancer does not support this conclusion. Bai et al. reported that chemotherapy may reduce EGFR mutation frequency in patients with non-small cell lung cancer (10). Given these previous findings and case studies, it may be beneficial to perform rebiopsy when progression is diagnosed and before a new treatment is started, although this is often not easy in clinical practice. It is possible that alternative rebiopsy techniques, including liquid biopsy, will make it easier to evaluate molecular mechanisms of resistance, although further investigations are required to elucidate the currently unknown resistance mechanisms to EGFR-TKIs.