Adenovirus pneumonia typically is limited to newborns, immunodeficient hosts, and school or military camp populations (1). Severe adenovirus pneumonia has been frequently described in immunocompromised patients. However, with the advances and widespread use of viral screening, adenovirus has been increasingly found to be involved in sporadic cases and outbreaks of severe community-acquired pneumonia (CAP) in healthy adults (2,3).

Bilateral interstitial infiltrates were previously reported as the principal imaging findings in adults with adenovirus pneumonia, regardless of immune status (2,4,5). However, cytolysis, hemorrhagic necrosis, and grossly congested, consolidated lungs are the typical pathological changes seen in adenovirus pneumonia (1). More and more research supports consolidation rather than interstitial infiltrates as the main imaging characteristic of adenovirus pneumonia in immunocompetent adults (3,6-9), though only a few reports have included supporting CT findings (10,11). The purpose of this study was to describe the radiographic and CT findings of severe adenovirus CAP in eight immunocompetent adults.

There were eight patients (male-female ratio, 3:1) with an age range from 22 to 52 years (mean age, 35.9 years) (Table 1). Six patients had no significant underlying disease, while one patient had a history of cerebral infarction and hypertension, and another patient had hypertension, type 2 diabetes and asthma. None of the patients were severely immunocompromised. The major symptoms at presentation were high fever(>39 °C) (n=8), dyspnea (n=8), cough (n=8), ARDS (n=8), septic shock (n=4), hemoptysis (n=4), chest pain (n=3), diarrhea (n=2), myalgias (n=1), and sore throat (n=1). The time interval from illness onset to admission was 1–15 days with a median of 6 days. Acute Physiology and Chronic Health Evaluation 2 (APACHE II) score at admission ranged from 4 to 17 [mean, 12.5±4.8 (SD)]. Empirical broad-spectrum intravenous antibiotics were given to all the patients, while one was prescribed oseltamivir prior to the confirmation of viral pneumonia in our study. Four patients received adjuvant intravenous immunoglobulin for 3–5 days, while five received corticosteroids for 3–7 days, including hydrocortisone or methylprednisolone. Six patients required invasive mechanical ventilation with a duration range from 8 to 23 days and a median of 11.5 days. The sole death was a 52-year-old man with three comorbidities, who died after 23 days of mechanical ventilation.

Chest radiographs were performed using computed radiography or portable computed radiography at bedside, both of which were performed in the anteroposterior projection. Some of the initial CT scans were performed in different institutions, where different types of scanners and protocols were used. The technical parameters included 0.625, 0.75 or 1 mm collimation at 2–7 mm section thicknesses. All CT scans were performed at the end of a deep inhalation with the patient in the supine position, without contrast administration with the exception of one patient. Images were photographed on both lung (window width 1,200–1,600 HU; level −500 to −700 HU) and mediastinal (window width 350–450 HU; level 20–40 HU) settings.

Two chest radiologists (with 15 and 8 years of experience in thoracic imaging, respectively) interpreted the images obtained before and after admission independently, with the decisions made by consensus in case of disagreement. They were blinded to the clinical information of the patients. Each lung was divided into upper and lower zones on radiographs for purposes of analysis. Abnormalities were considered to be distributed to the upper lung zone when they were located above the hilum, to the lower lung zone when they were located under the hilum, or random when both zones were involved. Criteria for chest radiographic and CT findings findings were preferentially defined according to the “Fleischner Society’s Glossary of Terms” (12). 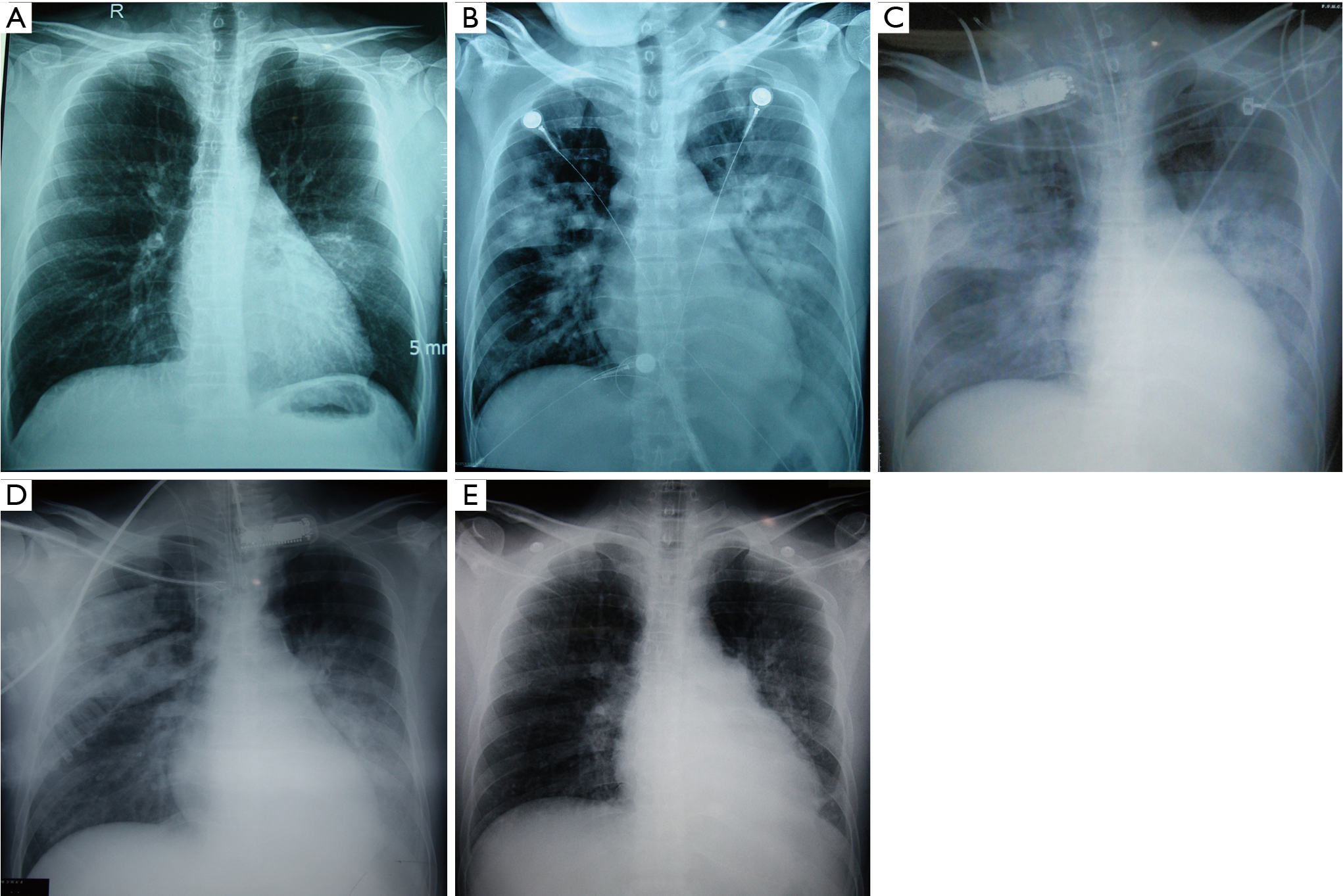 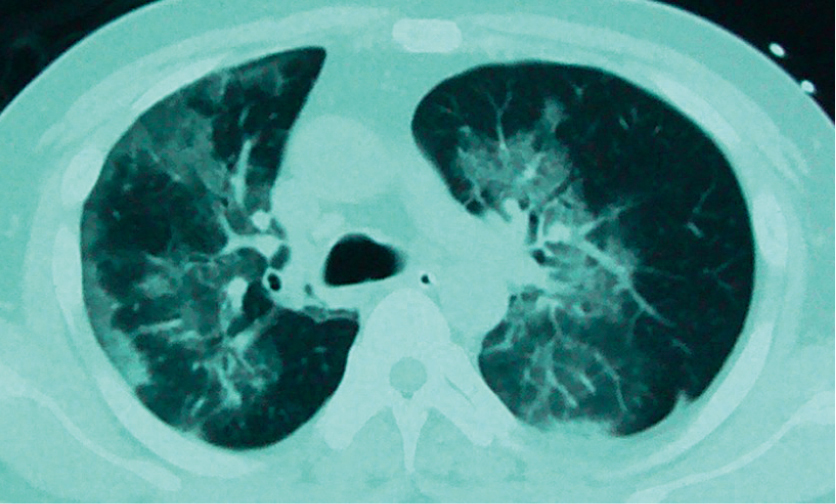 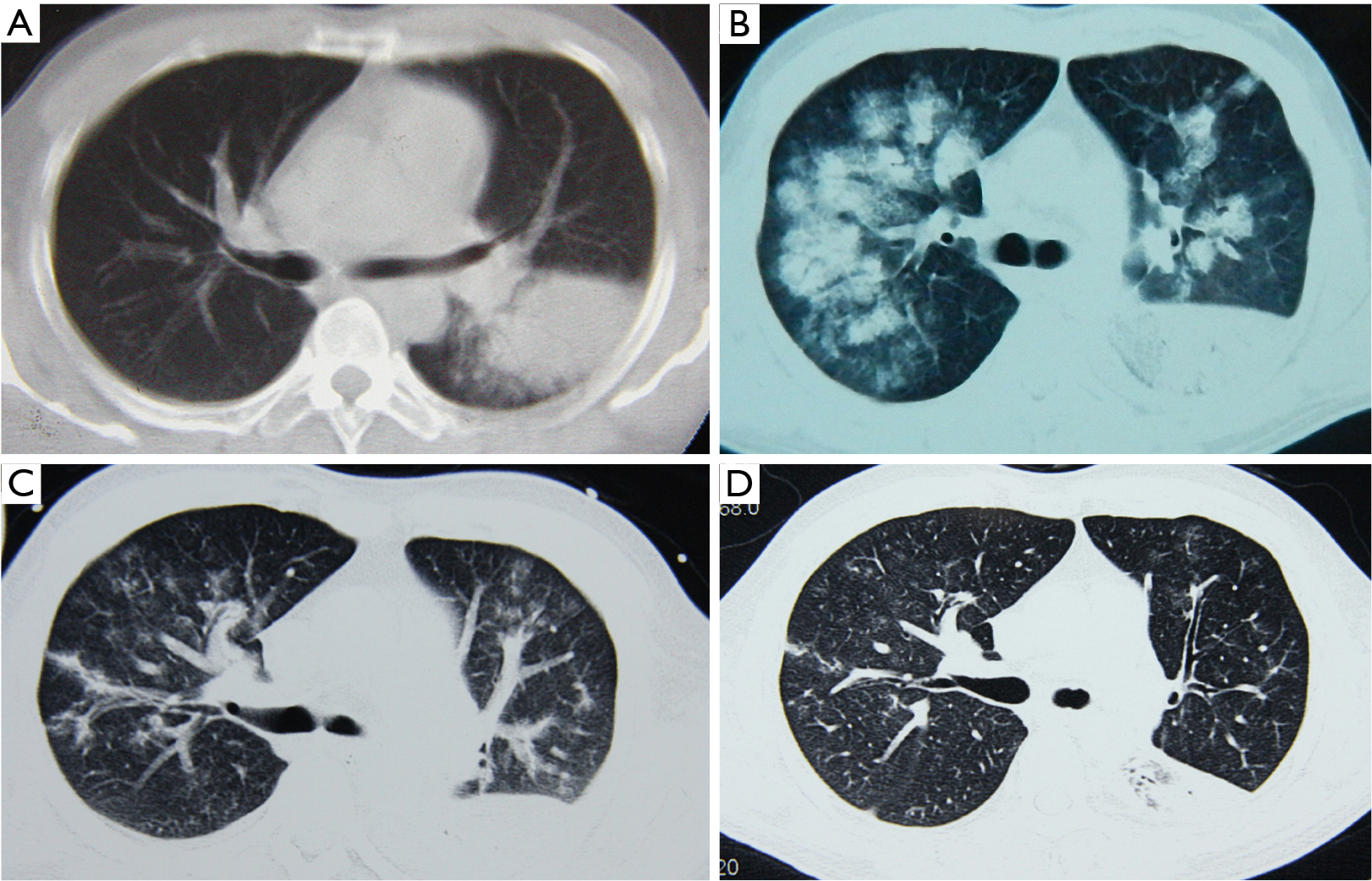 All eight patients had follow-up chest CT images. The time interval between initial CT and the first follow-up CT ranged from 2 to 7 days with a median of 6 days [mean, 5.4±1.6 (SD) days]. The first follow-up CT scans which were performed within ten days of illness onset showed rapid progression of the abnormalities (Figure 3B); including, more extensive unilateral (1 of 6) or bilateral (5 of 6) areas of consolidation, and unilateral (2 of 6) or bilateral (4 of 6) pleural effusion. Follow-up CT scans of most patients had mixed patterns showing predominant consolidation with adjacent GGO. Numbers of lung lobe involved by consolidation in all eight patients were significantly more at the time of maximum severity (2 to 5, mean 4 lobes) than at the presentation (1 to 4, mean 1.7 lobes). In accordance with chest radiographs, CT parenchymal abnormalities began to absorb at about two weeks of illness onset (Figure 3C,D). The serial CT findings showed no appearances of fibrosis such as reticular opacities, cystic lesions, or traction bronchiectasis.

Adenovirus, which is the cause of up to 3% of CAP, may be an under recognized cause of fatal pneumonia (13). More than 60% of adenovirus pneumonia patients need intubation and mechanical ventilation (2). Chest imaging has an important role in determining a presumptive etiology and severity assessment of CAP for clinical decision making. The most common initial radiological findings of our study population were focal consolidation, which are also commonly seen with bacterial pneumonia.

In accordance with the reputation of respiratory viruses for causing diffuse interstitial infiltrates, Clark reported widespread bilateral interstitial shadowing as the most common abnormality in 22 immunocompetent adults of adenovirus pneumonia (2). Patchy GGO with or without consolidation on CT were found most frequently both in immunocompromised and immunocompetent patients (4). Histopathologically, GGO reflects acute diffuse alveolar damage including hyaline membrane formation, interstitial lymphocyte infiltration, type II cell hyperplasia, and intraalveolar hemorrhage, edema and fibrin deposits (14). In our study, GGO as a subsidiary manifestation were also frequently observed in the progressive stages of severe adenovirus pneumonia, with only one in eight patients showed predominant GGO with adjacent consolidation.

Parenchymal abnormalities of adenovirus pneumonia began to absorb at about two weeks after illness onset, which is about one week sooner than other viral pneumonia such as avian influenza virus infection (19). Focal consolidation on the initial CT scans in our study did not show any preference for specific segments of lung, though Hwang et al. (9) summarized that the right lower lobe was the specific zone of lung infiltration in adenovirus pneumonia. Pleural effusion was thought to be less commonly noted in adenovirus pneumonia (2,3). However 75% of patients in our study and 66.7% of ARDS patients in Gu’s research (11) had pleural effusion, which might be related to more serious illness (8). Appearances of fibrosis which are common in other viral pneumonia were not observed in the present study, which may be another imaging characteristic that resembles bacterial pneumonia.

Our study has several limitations. First, it is retrospective and the scanning intervals for patients were dissimilar. Second, there were a relatively small number of cases owing to the absence of viral screening in non-serious cases combined with the relatively low incidence of adenovirus pneumonia. All the patients in our study had ARDS and no patients with mild clinical disease were included. Third, the relationship between CT and histopathology could not be evaluated since no lung tissue biopsies were available. Finally, technical parameters in image acquisition were not identical, since some initial chest radiographs and CT scans were performed at other institutions prior to a patient being transferred.

In conclusion, severe adenovirus CAP in immunocompetent adults manifests usually as focal consolidation followed by a rapid progression to bilateral consolidation, usually accompanied by adjacent GGO and pleural effusion. The initial image findings and clinical presentation of adenovirus pneumonia may resemble bacterial pneumonia. Screening of adenovirus should be considered in cases of severe pneumonia.