The case of minimally invasive cardiac surgery (MICS) was increased when the patient need cardiac valvular surgery or closure of atrial or ventricular septal defect. Comparing to open heart surgery, the MICS has advantages including minimum incision, fast recovery, reduced bleeding, reduced transfusion and improvement in incidence of atrial fibrillation (1). Therefore, MICS is appropriate to apply the fast track protocol in the field of cardiac surgery and the cardiac surgeons try to achieve the fast track protocol.

Lung deflation is needed for the MICS and generally done by using a double-lumen endobronchial tube (DLT) (2). The placement of a DLT may be more challenging in certain patients because it has larger diameter than that of a single-lumen endotracheal tube (SLT) and may be associated with airway trauma and bleeding (3). Postoperative airway swelling may also occur after using the DLT and the anesthesiologists may be in danger when exchanging a DLT to a SLT at the end of the surgery, even with the use of airway exchange catheters (4). Moreover, there are specific conditions in which a SLT may be preferred to a DLT, such as patients with previous oral or neck surgery who present with a challenging airway and require lung separation. Although one lung ventilation is important but not essential for MICS if it is possible that ventilation can be held or made intermittent both prior to CPB or at its conclusion to permit exposure (5).

The cardiothoracic surgeons often consider that complications related with insertion of a DLT would result in failure or interference of the fast track protocol. The goal of this study is to investigate the feasibility of using a SLT compared with a DLT during anesthetic management in MICS and which method of lung deflation is appropriate for the fast tract protocol.

After the Institutional Review Board approved, we conducted a retrospective review of clinical data of 112 patients who underwent MICS within about 3-year period beginning in July 2012 at Pusan National University Yangsan Hospital in Yangsan, Republic of Korea.

Administering O2 5 L/min for three minutes after standard monitors were applied to the patient and the anesthesia was induced using propofol (1–2 mg/kg), cisatracurium (0.2 mg/kg), remifentanil. Anesthesia was maintained by sevoflurane and remifentanil and the concentration of sevoflurane was adjusted to maintain the level of bispectral index as 40–60.

Trained anesthesiologist inserted a SLT or a DLT and confirmed the location of a DLT using the fiberoptic bronchoscope (FOB). After the patients were placed on their left side in a supine position at a 30° angle, the location of the DLT was ensured by FOB. A 6-cm incision was made along the 4th intercostals space for mitral valve surgery and 2nd intercostal space for aortic valve surgery. Peripheral cannulation through the right femoral artery and vein was performed with semi-Seldinger technique. Cardioplegic arrest for myocardial protection was induced using antegrade cold blood cardioplegia following transthoracic aortic cross-clamping.

After confirming the placement of a SLT or a DLT, the anesthesiologist set the tidal volume 4–6 mL/ kg using ideal body weight and adjusted the respiratory rate to maintain the end-tidal CO2 in the acceptable range not precipitating respiratory acidosis. In general considerations, the surgeon request intermittent lung deflation prior to CPB or at its conclusion to permit exposure. Therefore, the patients were ventilated under 100% oxygen after right thoracotomy or weaning from the CPB for prevention of rapid desaturation and the anesthesiologist achieved intermittent lung deflation whenever the surgeon requested that. When the oxygen saturation of the patients became below 95%, the anesthesiologists resumed to ventilate the patients communicating with the surgeon. Before closure of chest wall, adequate pulmonary re-expansion was performed by same recruit maneuver in both groups. Extubation and transfusion of blood product were performed under the same protocol in all patients.

Cardiopulmonary bypass (CPB) time, aortic cross clamp (ACC) time, anesthetic induction to skin incision time, surgical time and total anesthetic time were recorded. The proportion of the extubation in operation room, duration of mechanical ventilation after surgery and the length of intensive care unit (ICU) stay were reviewed. Postoperative blood loss for 12 hours after the end of the surgery and blood transfusion were recorded. The difference in the occurrence of postoperative complications was also identified between both groups. Postoperative complications included arrhythmia, neurologic complication, bleeding requiring re-exploration.

An independent t-test was used to compare continuous variables such as the duration of mechanical ventilation and the length of ICU stay between the two groups. Dichotomous variables were compared using chi square analysis or Fisher’s exact test. P value under 0.05 indicates statistical significance. The statistical analyses were done using SPSS, version 21 (Statistical Package for the Social Sciences, 2012, IBM Corporation, NY, USA).

Ninety six patients were included and divided into the SLT group (N=50) and the DLT group (N=46) (Figure 1). Sixteen patients who experienced J-sternotomy or difficult intubation and cases that have no records of the ACC time or were achieved by anesthesiologist in training were excluded. Table 1 shows baseline and surgical characteristics of the patients. The height, weight and body surface area of the patients were not statistically different between the two groups. In addition, there were no differences in the type of procedure (Table 2). The CPB and ACC times were 86.76±35.79 and 53.1±32.47 min, respectively, for the SLT group, and 95.93±33.08 and 63.91±31.6 min for the DLT group (P=0.1021 and 0.195). 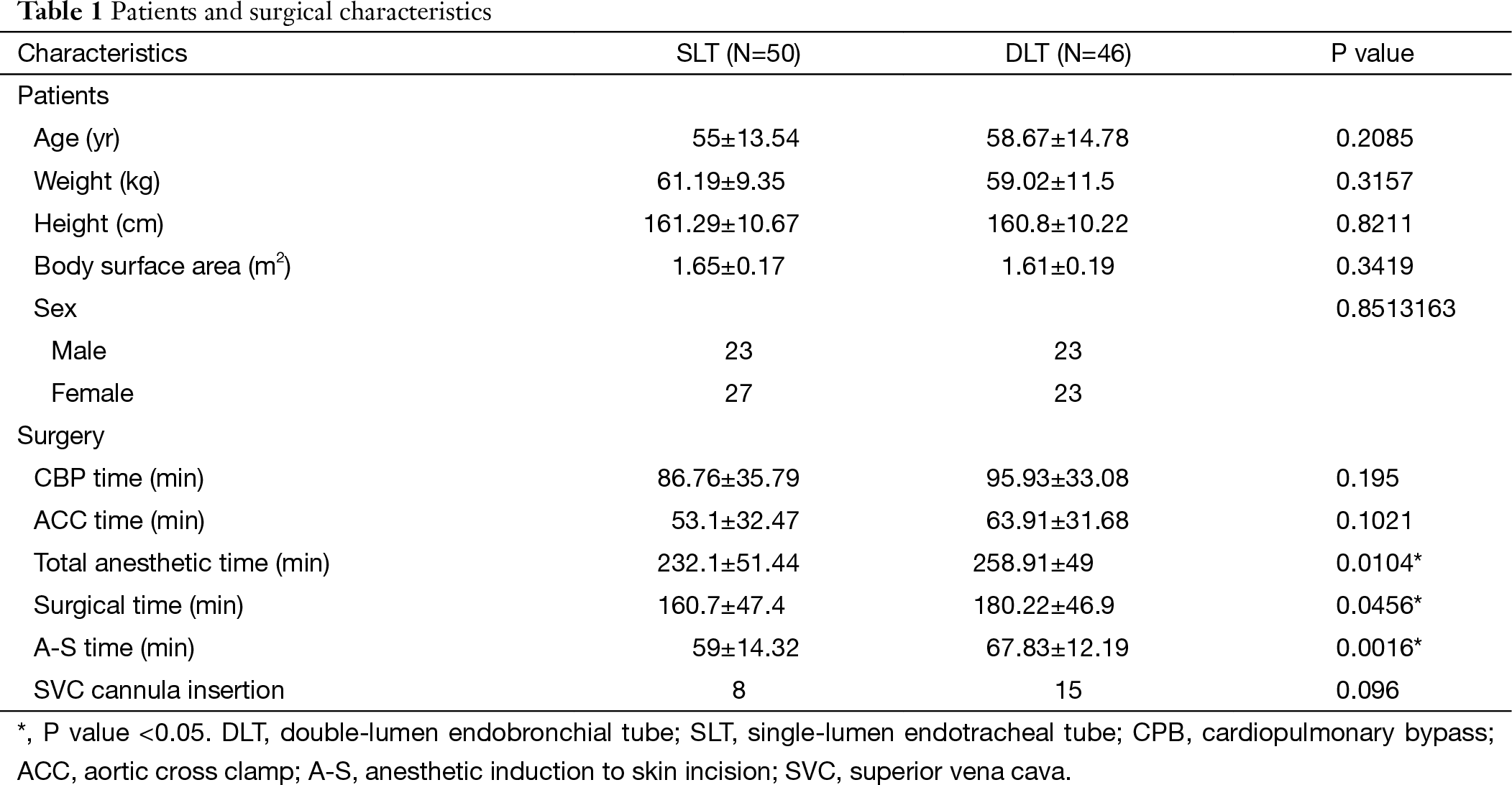 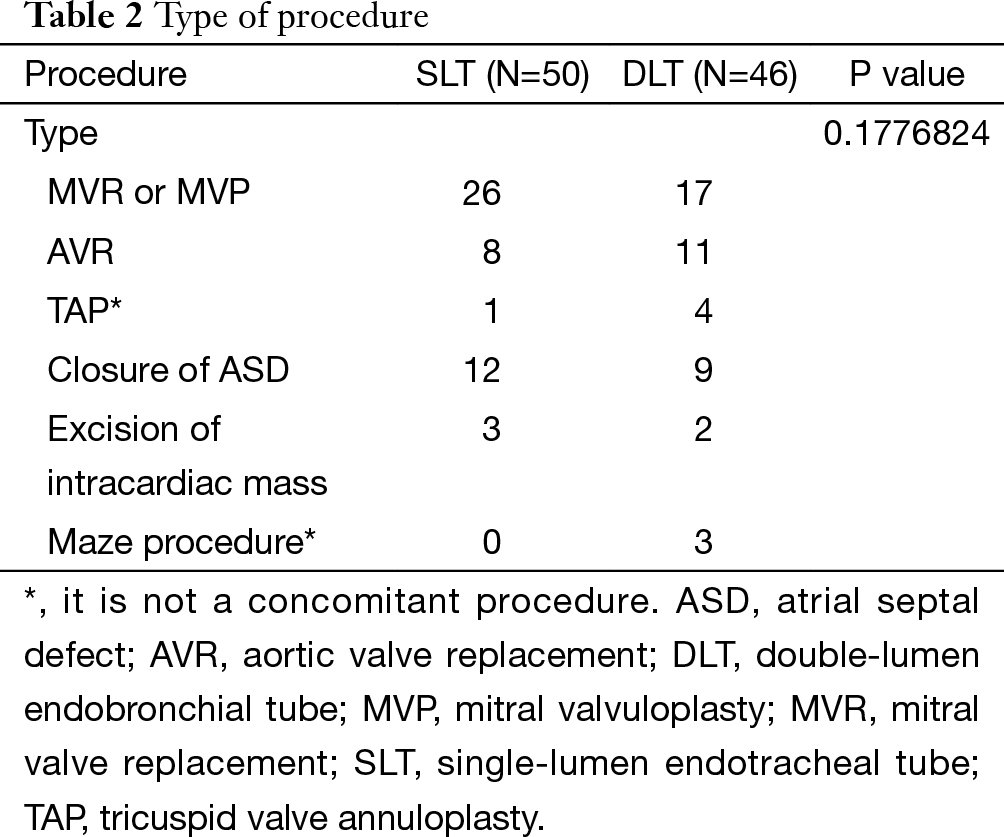 It has been thought to be standard protocol which needs to sedate the patients and assist respiration using mechanical ventilator after cardiac surgery. However, while fast track concept, which takes into account the economic benefits and patient satisfaction, the surgeon and anesthesiologist are striving to achieve a fast track. Especially, MICS has many advantages over open heart surgery and it makes more advantageous to apply a fast track protocol.

The index for fast track evaluation is various through many research, mainly duration of ventilator support, the proportion of immediate extubation in operation room, length of ICU stay and hospital stay (6,7). These studies mainly have shown the benefits of fast track protocol in cardiac surgery. However, Kiessling et al. reported that risk factors that could predict the fast track protocol failure in cardiac surgery, are ASA class >3, NYHA class > III and operation time >267 min (8).

For the successful fast track protocol, the anesthesiologist could try to use the short-acting hypntics, muscle relaxants and narcotics, to control the postoperative pain, and to manage the fluid balance (9). Lung deflation is a major difference in anesthetic management between MICS and open cardiac surgery and most anesthesiologists use a DLT for lung isolation during MICS because a DLT has several advantages. It has less chance to move after positioning and allows for the application of continuous positive airway pressure and suction to the deflated lung. However, the confirmation of the position of a DLT is needed by using the FOB and there may be difficulties during insertion and positioning of a DLT in patients with difficult airways or abnormal upper or lower airway anatomy. The anesthesiologists need to change a DLT to a SLT for ventilator therapy after surgery is completed. Also, a DLT has more possibility to make airway trauma leading to postoperative hoarseness and throat pain compared with a SLT (10).

Intubation with a SLT has been started because of failed intubation with a DLT undergoing MICS in our department. Also we had experienced a case of endobronchial bleeding while using a DLT in patients with idiopathic thrombocytopenic purpura (5). Although there was a bronchial blocker (BB) in our hospital, we did not use it because it needs more time to be positioned, more often repositioning, and provides nonoptimal right lung isolation due to right upper lobe anatomy (11). Based on these experiences, intubation with a SLT without a BB was gradually increased. Also, it was possible to dissect the surgical field and control the hemorrhage while intermittent deflation of right lung using merely a SLT because the surgeon was expert.

The cardiothoracic surgeons sometimes consider that complications related with insertion of a DLT would result in interference of the fast track protocol or insertion of a SLT would be beneficial to the success of the fast track protocol. We conducted a retrospective review of clinical data of 96 patients who underwent MICS and there was no statistical difference between the two groups in the duration of ACC and CPB, possibilities of extubation in the operation room, mechanical ventilation after the operation, and the length of ICU stay. Also, we could not find any statistical differences between the two groups in postoperative complications (such as arrhythmia, neurologic complication, reoperation due to bleeding and death). Anesthetic induction to skin incision time, surgical time, and total anesthetic time were significantly shorter in the SLT group than the DLT group. It took time to confirm the position of a DLT via FOB and it could make the anesthetic induction to skin incision time, surgical time, and total anesthetic time to be prolonged. Although the amount of bleeding within 12 hours after surgery in the SLT group was a little larger than in the DLT group, there were no differences in postoperative transfused units of blood product and no clinical significance. The surgical time, the anesthetic time and the amount of blood loss could influence on the patient's outcome and overall health care efficiency (especially, cost) and the extension of the surgical time is an independent predictor of failure of the fast tract protocol during cardiac surgery (8). Kiessling et al. reported that operation time >267 min could predict the fast track protocol failure in cardiac surgery (8), but the surgical time was 160.7±47.4 min in the SLT group and 180.22±46.9 min in the DLT group and it might not influence on fast track protocol failure. According to our result, whether SLT or DLT is inserted, it seems not to affect the fast track protocol success although surgical time in DLT group is longer than in SLT group. Therefore, if there is fast track protocol, a DLT is appropriate for lung isolation during MICS and a SLT could be inserted if it is not possible to use a DLT because the surgical time and complications did not increase when using a SLT.

We have several limitations associated this study. First, our study is a single centered and a retrospective study. Second, all of the MICS were performed by a single surgeon who is expert at MICS and it may be difficult to apply our result directly or generously to other hospitals or centers. In the future, further investigations should be multi-centered and performed in a prospective and randomized method.

In conclusion, if there is a specific anesthetic and surgical design for fast track protocol, both SLT and DLT is applicable because those do not influence on the success of fast track protocol. Furthermore, if the cardiothoracic surgeon is expert, intubation with a SLT without a BB for MICS provide to be feasible anesthetic management by the intermittent lung deflation, which has no adverse postoperative effects.