Esophageal carcinoma (EC) is one of the most common malignancies worldwide, causing more than 400,000 deaths annually primarily in developing countries including China (1). The prevalence of the two major histological types, namely, esophageal squamous cell carcinoma (ESCC) and adenocarcinoma, differs depending on geographical location. While esophageal adenocarcinoma is prevalent in some western countries, ESCC is the predominant type in Asia and other high-incidence area (2,3). Globally, EC is three or four times common among males than females (1). For ESCC specifically, the male: female incidence ratio is 2.4:1 (4). Although this difference may be the consequence of various tumor-specific environmental exposures such as tobacco and alcohol consumption between men and women, growing evidences from epidemiological (5,6) and experimental (7) studies suggest that sex hormones may play an important role in the development of ESCC. Epidemiological studies have reported that use of hormone therapy have a lower risk of ESCC compared with never users (5,6). Experimental investigation also showed that the inhibitory effect of estrogen to the proliferation of ESCC (7). Gender differences affect ESCC incidence, however the significance of gender as an independent prognostic factor is unclear. The objective of current analysis was to investigate the prognostic value of gender for ESCC patient survival after esophagectomy.

Between January 2002 and December 2006, 756 consecutive patients with a pathologically diagnosis of ESCC underwent esophagectomy in Sun Yet-sen University Cancer Center. The data were collected retrospectively and analysed from the patients’ medical records. Patients who had second malignant disease other than ESCC (11 cases), received R1 or R2 resection (28 cases), died within 30-day after operation (9 cases) and lost to follow up (34 cases) were excluded from the analysis. The study was officially approved by the ethic committee of our cancer center. Current smokers and ex-smokers were defined by their smoking status at one year prior to their diagnosis with ESCC. An alcohol drinker referred to those who had at least one drink/week for more than one year.

Surgical procedures included resection of the primary tumor and lymphadenectomy. The left thoracotomy with an end-to-side esophagogastric anastomosis was performed for patients with tumors located below the aortic arch. A right thoracotomy plus an abdominal procedure with left cervical anastomosis was performed for patients with tumors located above the aortic arch. Lymph node dissection was performed including the left and right tracheobronchial, subcarinal, paraesophageal, diaphragmatic lymph nodes as well as the paracardial, lesser gastric curvature, left gastric artery and celiac nodes. Lymph nodes next to the left and right recurrent laryngeal nerves were removed when a right thoracotomy was used.

Adjuvant therapy was suggested to patients with T3–T4 classification or positive lymph node involvement; however, there was no uniform guideline and regimen either for adjuvant chemotherapy or radiotherapy after esophagectomy in our hospital during the period of this study. Only 128 (19.0%) patients completed the adjuvant radiotherapy and/or chemotherapy.

All pathological records for resection specimens were reviewed. We recorded the depth of tumor invasion and the total number of lymph nodes involved with tumors. Histological grade of tumor was classified as either well (G1), moderately (G2) or poorly (G3) differentiated. The pTNM staging was based on the Seventh Edition of the AJCC TNM System for ESCC (9).

SPSS16.0 (SPSS, Chicago, IL, USA) statistical software was used for statistical analysis. Quantitative data were expressed as mean ± standard deviation, and a t-test (two-tailed) was performed for comparison. The Pearson’s chi-squared test was used to evaluate significant differences between groups for dichotomous variables. Survival analysis was performed using the Kaplan-Meier method, and compared by means of the log-rank test. Multivariate analysis for prognostic factors was performed using a Cox proportional hazard model. A P value of less than 0.05 was considered statistically significant.

A total of 674 patients were included in the study. There were 520 males and 154 females with a median age of 58 years (range, 30–80 years). Patients’ clinic-pathological characteristics according to age-gender groups are showed in Table 1. Higher prevalence of smoking and alcohol drinking were observed in male patients. 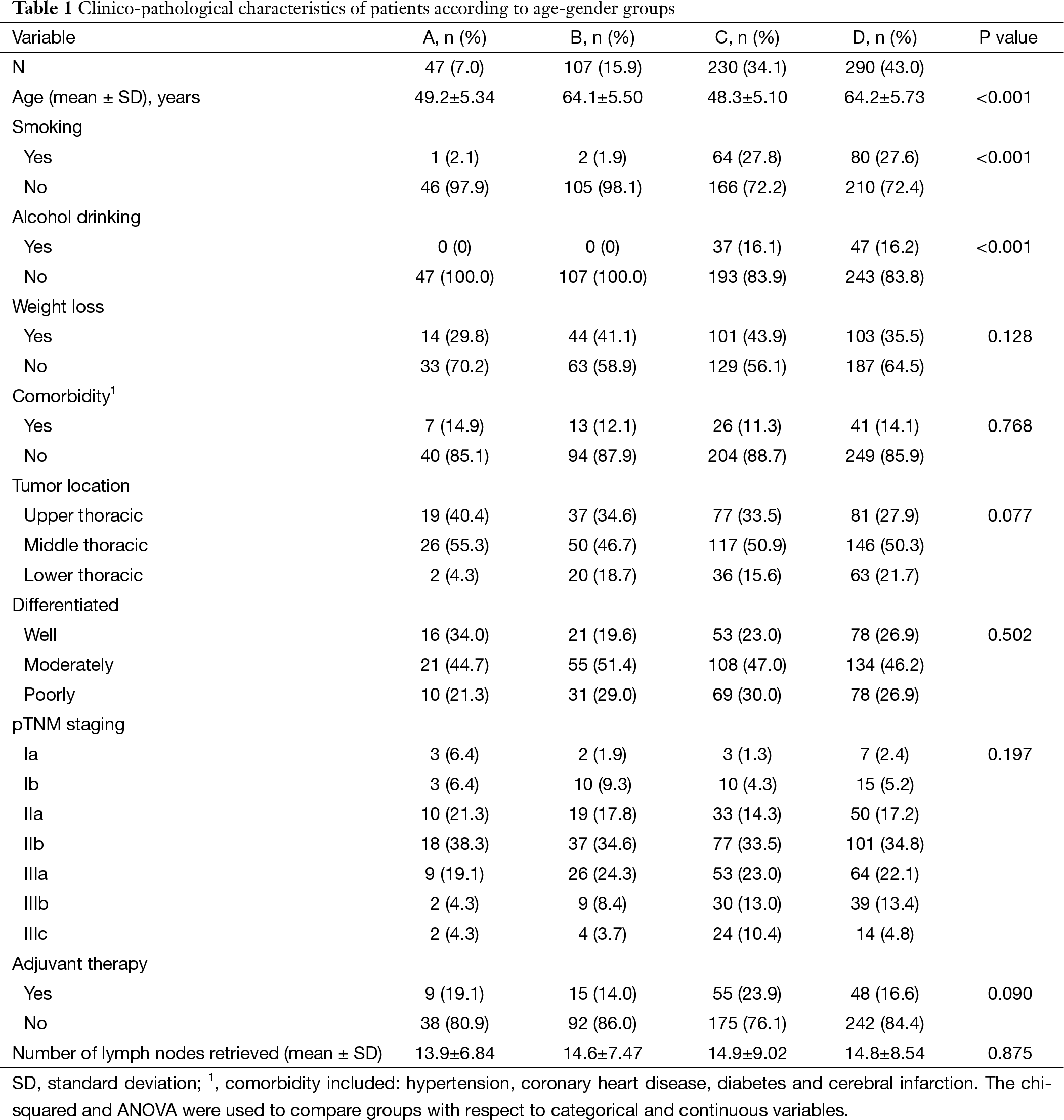 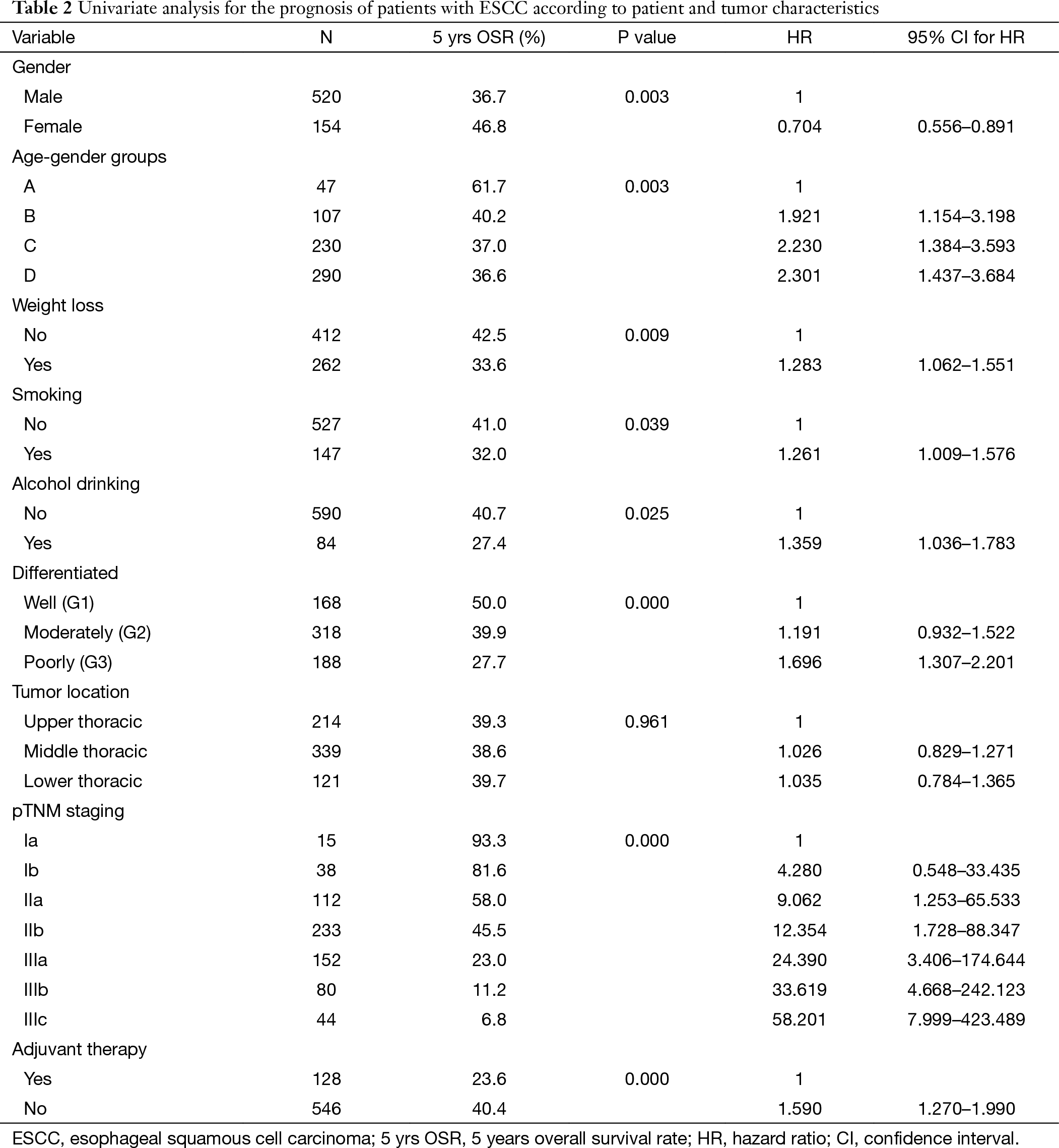 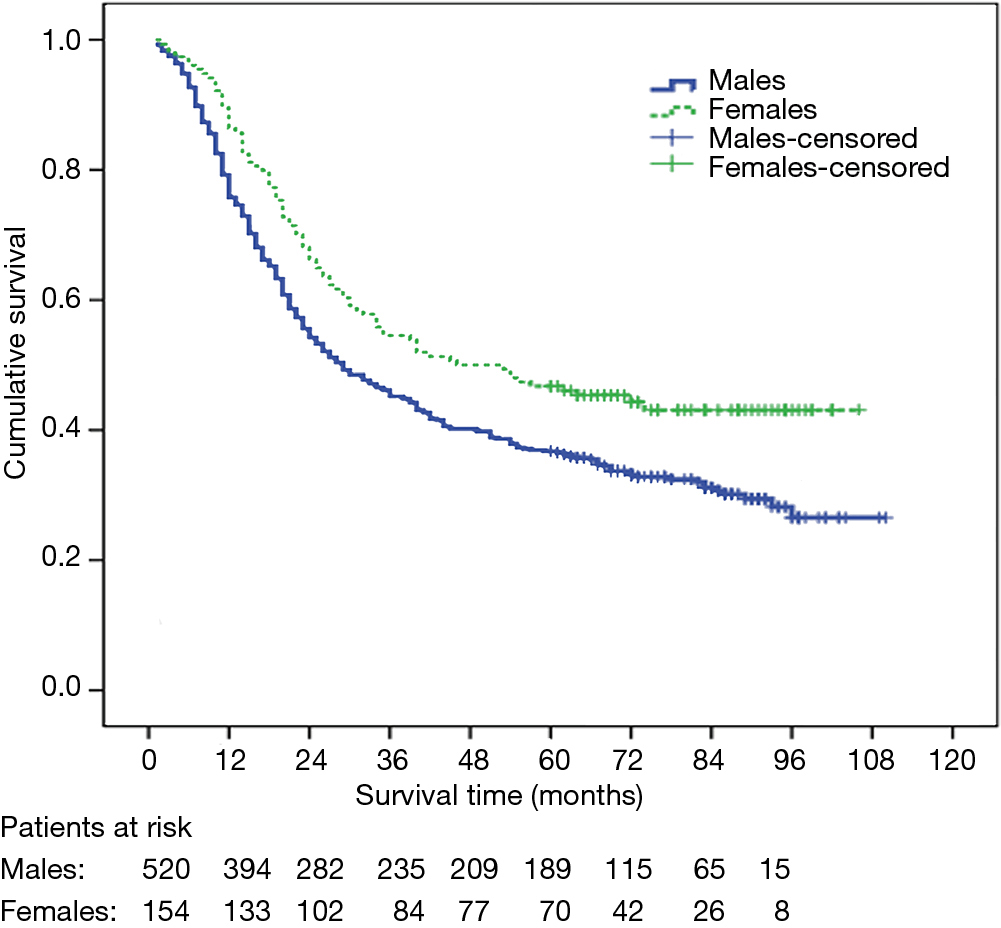 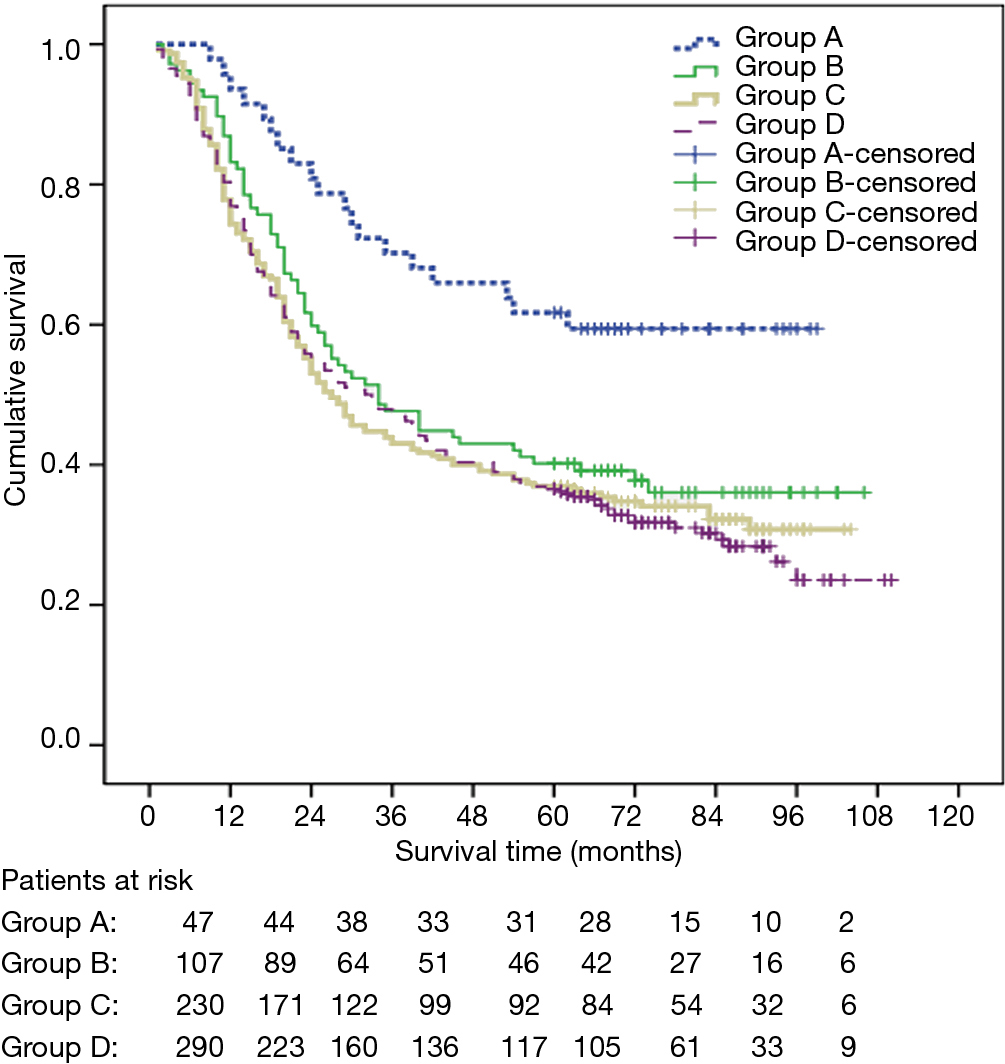 A Cox proportional hazard model was performed with the incorporation of gender, weight loss, smoking, alcohol drinking, tumor histological grade, pTNM staging and adjuvant therapy to assess independent predictors of survival. The result showed that gender and pTNM staging were independent prognostic factors (Table 3). When age-gender groups was incorporated in the multivariate analysis model instead of gender, the result showed that age-gender groups and pTNM were independent prognostic factors (Table 4). 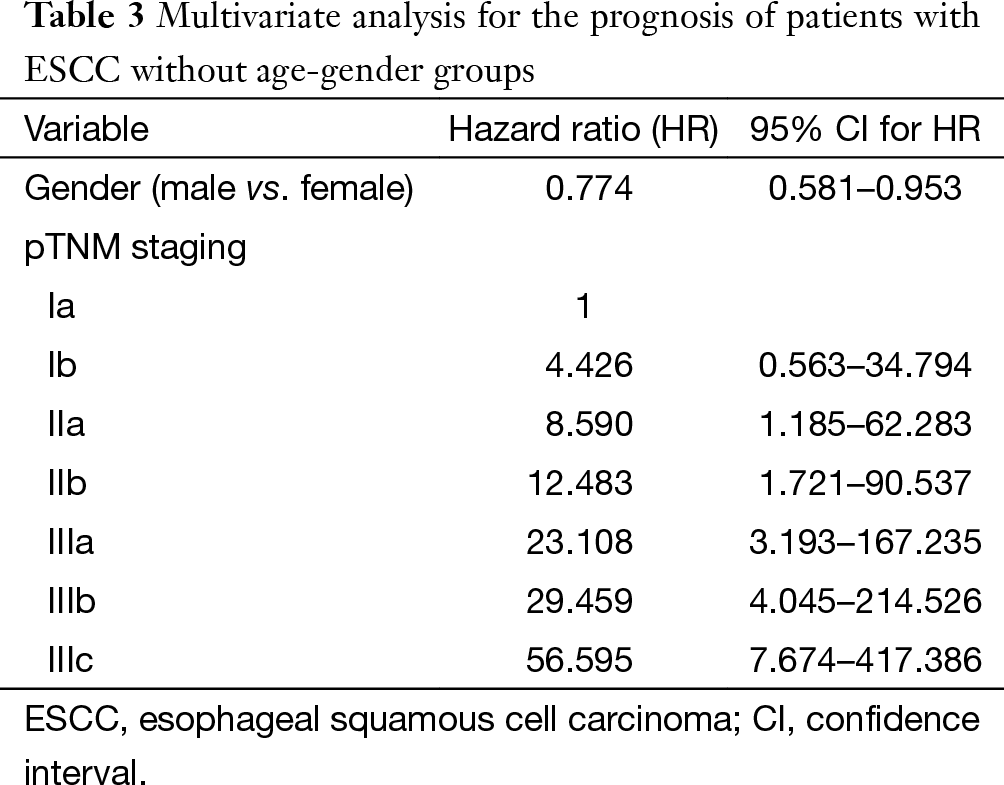 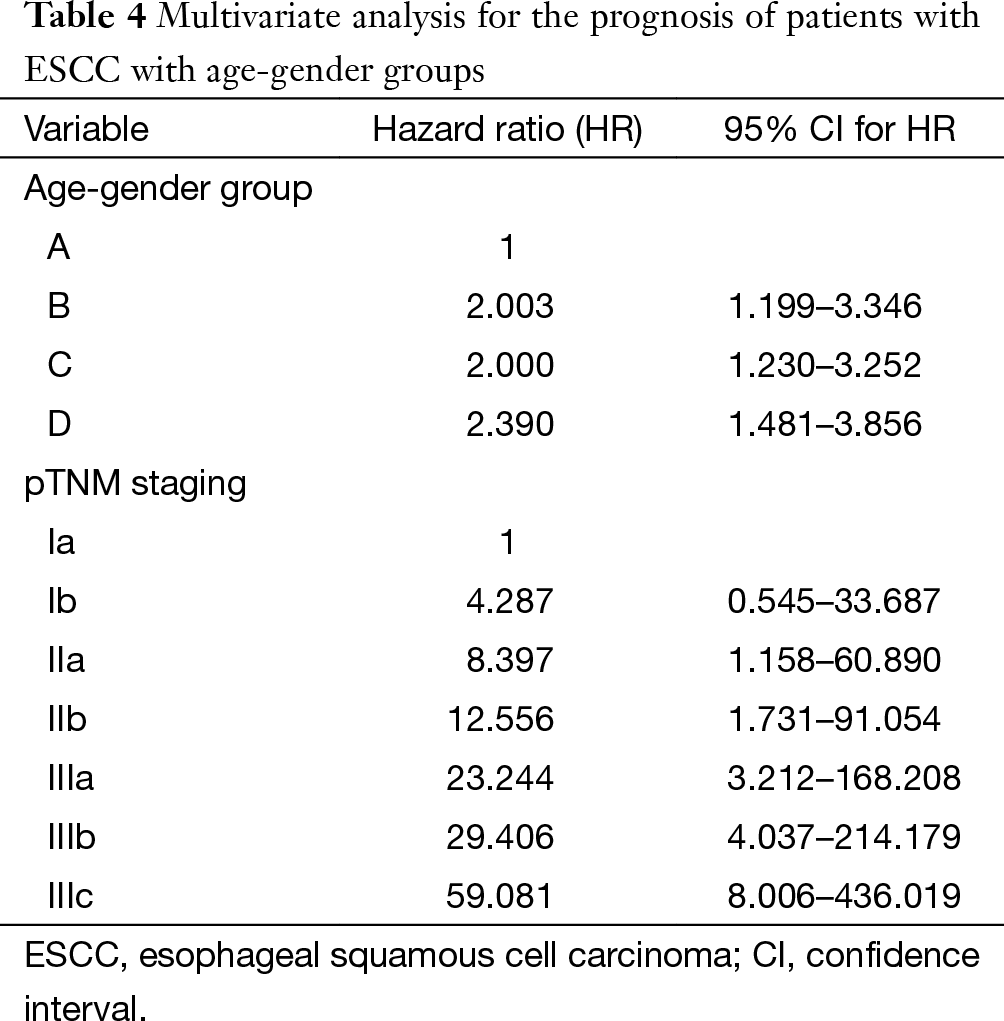 A gender difference has been reported in the incidence of ESCC (1,4). Estrogens have been proposed to play a role in this difference (10). Epidemiological studies have suggested a potential role for sex hormones in ESCC etiology (5,6,11). The prognostic role of gender for ESCC patient survival after esophagectomy remains uncertain, although stage and other clinical characteristics of the tumor which have an impact on the survival of patients with ESCC have been well documented (9,12). In their review of 1,000 consecutive ESCC patients who underwent esophagectomy, Morita and colleagues (13) reported that female was an independent favorable prognostic factor [hazard ratio (HR): 0.74]. Wang and colleagues (14) analysied 582 patients with ESCC and reported that female patients had a better 5 years survival rate as compared with male (female vs. male: 48.2% vs. 28.7%, HR: 0.0498, P=0.003). Bohanes and colleagues (8) reported in one of the largest EC patient cohorts that gender was an independent prognostic marker for ESCC patients and that women fared better. In patients who underwent neo-adjuvant chemo-radiation followed by esophagectomy, male gender was found to be an independent predictor of poor prognosis (15). The positive prognostic value of female was demonstrated by these reports (8,13-15), however, a limitation of previous studies (13-15) is the lack of adjustment on the influence of age. In the current study, our results are consistent with these reports if age-gender factor was not incorporated in the multivariate analysis model.

When age being accounted for, we tried to investigate whether menopause affected this prognostic difference. Age is commonly considered as a surrogate for menopause. Age 55 years was selected as a surrogate for menopause (8) because menopause occurs in only 5% of women after age 55 years (16). We found that only women younger than age 55 years had a lower risk of dying of ESCC when compared with men of similar age, as well as women and men age 55 years and older. Similar result from SEER databases showed that women younger than age 55 years with squamous cell metastatic esophageal cancer had a significantly better outcome (8). Our finding may further support the hypothesis that sex hormones could affect the prognosis of patients with ESCC (8). The mechanism between sex hormones and the prognosis of patients with ESCC is currently not defined. Experimental investigation suggested the inhibitory effect of estrogen to the proliferation of ESCC (7), and this effect might be regulated by the function of estrogen receptor (ER) (17). Subtypes of ER, ER alpha (ERα) and ER beta (ERβ), are expressed in ESCC (18,19). It is reported these ERs might contain different biological function (20). ERβ is known to bind to ERα and to have a suppressive function toward ERα. Using an immunohistochemical method to examine expression of ERα and ERβ, Nozoe and colleagues (19) found that positive expression of ERα in addition to negative expression of ERβ proved to be an unfavourable independent prognostic indication in ESCC. ERβ expression was found to be changed quantitatively and qualitatively with disease progression during the multi-stages process of esophageal carcinogenesis (11). High frequency of ERβ expression was correlated with less aggressive potential of clinical behavior (11). However, the association between ER and the prognosis of ESCC is currently poorly understood. More investigations are needed to clarify the mechanism and interaction of sex hormones in ESCC and its prognosis.

Although hormonal influence may be the reason behind this gender difference in survival, other potential prognostic factors such as smoking and alcohol drinking should be considered. In our cohort, the prevalence of smoking and alcohol drinking were significantly higher among male patients. Smoking and alcohol drinking were found to be negative prognostic factors in univariate analysis, but they did not have significant influence on survival in multivariate analysis. Prediagnostic smoking has been reported as an independent prognostic factor for patients with ESCC (21). The impact of alcohol consumption on survival in patients with ESCC was demonstrated by two large cohort studies (22,23). They also revealed that heavy alcohol consumption may be independently associated with worse survival among patients.

The limitations of our study should be considered in interpreting the results. One is that it was unable to examine the serum sex hormones level in patients due to a retrospective study. Using age as a surrogate of menopause may lead to a selection bias. Moreover, problem of reliability in self-reported lifestyle factors cannot be excluded, although this information was obtained before the outcome of interest (death).

Among patients with ESCC after esophagectomy, women younger than age 55 years attained a favorable prognosis. Further studies are needed to elucidate the mechanism of antitumor effects of sex hormone in ESCC and its outcomes.