Serum lactate level as a useful predictor of clinical outcome after surgery: an unfulfilled potential?

The worldwide diffusion of point-of-care testing has made it possible to assess blood lactate easy and fast, but the use of blood lactate monitoring for risk assessment in the critically ill patient remains controversial. The different policies between hospitals and departments reflect the controversy regarding the usefulness of the blood sample (1). Lately, interesting papers about blood lactate level as a predictor of clinical outcomes have been published, but if we consider the whole literature scenario we do not have enough data to consider lactate a totally reliable prognostic index, or at least not in all the clinical settings (2-8). Lactic acid is normally considered a molecule with an excellent sensitivity for the cellular damage caused by anaerobiosis due to an oxygen debit during a shock status. In this context, the lactate is an extremely sensitive parameter but not so specific, in other words, if a state of shock is always, by definition, associated with hyperlactatemia, this relation is not bijective. In current practice, lactate is frequently measured in many kinds of patients, usually with the goal of detecting tissue hypoxia. However, given the metabolism of lactate and the effect of acute illness on glucose metabolism, increased lactate levels can reflect more than only tissue hypoxia (9). The lactate is at all times the result between the cellular lactate production and its clearance by enzymatic activity. There are many causes of hyperlactatemia (10,11), that are particularly common in critically patients hospitalized in intensive care unit (ICU) ward; in those patients the lactate measurement is undoubtedly considered routine “point-of-care” analysis. It follows that the retrospective statistical analysis of this biomarker is particularly delicate and difficult if not placed in a precise clinical context. The study by Creagh-Brown et al. (12) has addressed this issue with a very careful design: large cohort; relevant number of participating centers from the same country, well selected inclusion criteria, precise end-point, and multivariate data analysis. The increase in mortality of patients with high lactacidemia in the 24 hours after major gastrointestinal surgery represents an expected result already reported in other studies (13). The use of the recorded blood lactate peak in the first 24 hours is the first peculiarity of the present analysis, this fact is relevant and useful for a consistent statistical analysis but it does not reflect the behavior during the 24 hours. In other words, the same blood lactate peak could be recorded at the beginning of the 24 hours and then decreases or recorded at the end of the period of observation with a diametrical different clinical significance. This technical “bug” reflects the main limitation of a retrospective study with a “point of care” parameter analysis, routinely measured in ICU as included in a simple blood gas test. The elaboration of a risk-predictor-model involving lactacidemia in patients admitted in ICU after major surgery has to consider a similar scheme reported in Figure 1. Furthermore, the most unexpected data is the same behavior of the mortality rate related to the lactate peak in both study groups (elective and emergency). This would consider the lactate as an absolute predictor of poor outcome even in situations in which the high blood lactate level is caused by the hyper-activation of the glycolytic pathway leading to stressful situations. Moreover, Creagh-Brown and coworkers observed that, when restricting the analysis to patients with lactate peak levels within the reference range (0.1–2 mmol/L), lactate still remained an independent predictor of in-hospital mortality. This finding confirms previous observations in septic shock patients (14) and suggests mortality is proportional to the level of blood lactate without a clear safe threshold (15,16). 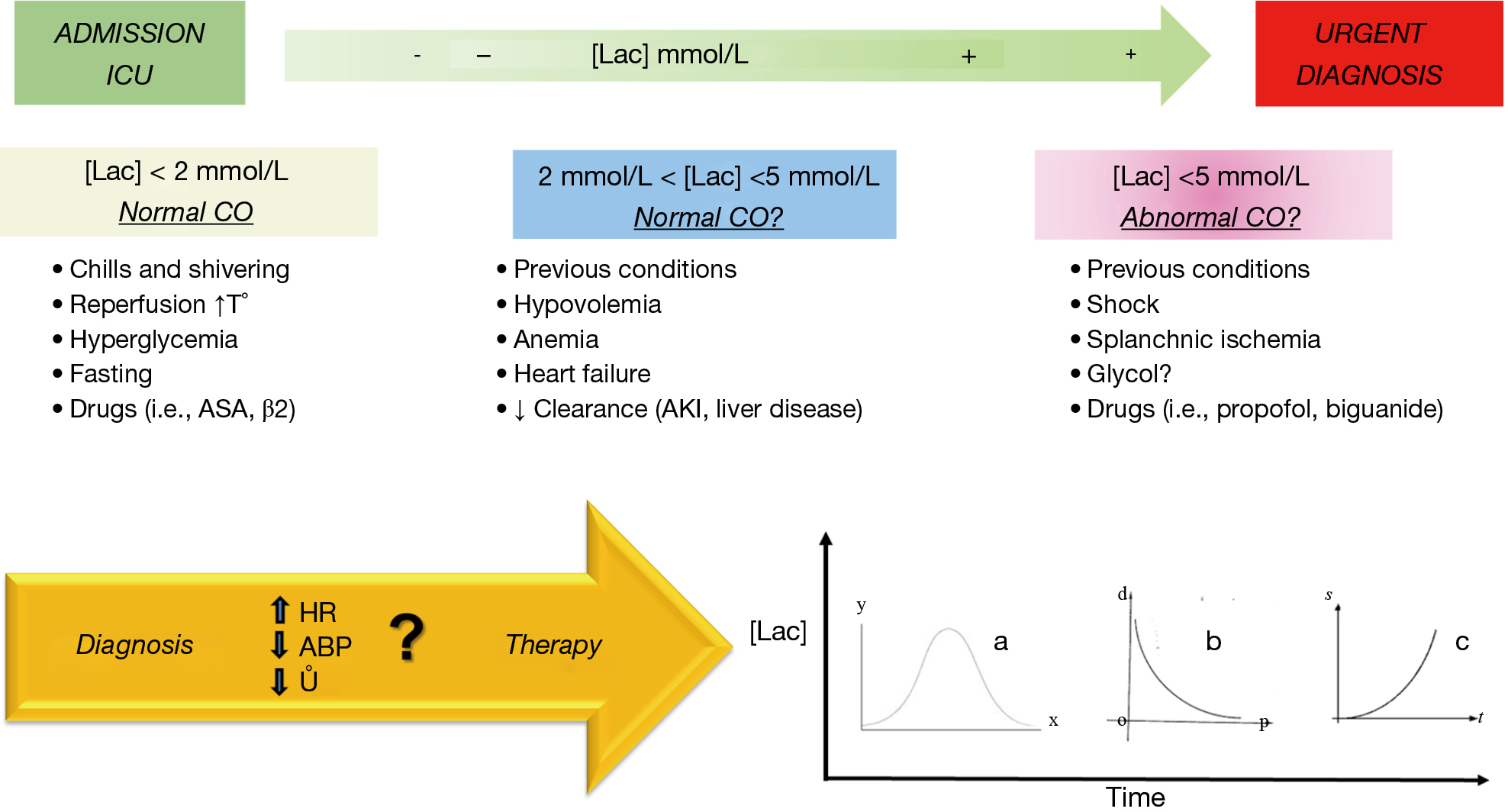 Figure 1 Possible behavior and causes of the lactic acid plasma level in the postoperative patient admitted in ICU after major surgery. The lactacidemia is divided in three groups at the admission in ICU: inferior to 2 mmol/L; between 2 and 5 mmol/L and superior to 5 mmol/L. Hyperlactacidemia requires a rapid diagnostic classification, in order to start the correct treatment. The time trend of the lactacidemia (a, b, c) is related to the physiopathological mechanism and to the efficacy of the treatment, this time trend has to be considered in the design of a risk-predictor-model using lactacidemia as a predictor of clinical outcome. ICU, intensive care unit; Lac, lactate; CO, cardiac output; ASA, acetylsalicylic acid; AKI, acute kidney injury; HR, heart rate; ABP, arterial blood pressure; Ů, urinary output.

In substance blood lactate level remains only a partially understood biomarker, for sure it would be able to reveal much more than a cellular oxygen deficit due to a shock condition. The mitochondrial enzymatic systems are responsible of the production of the lactic acid in the cells, lactacidemia is the result of the synthesis/clearance of the lactic acid, it follows that high blood lactate levels are always expression of adverse biochemical changes and, anaerobiosis due to a shock condition represents just one possible mechanism of these adverse biochemical changes. As we said, increased blood lactate levels are common in critically ill patients. Although hyperlactacidemia is frequently used to diagnose inadequate tissue oxygenation, other processes not related to tissue oxygenation may increase lactate levels. Especially in critically ill patients, for instance increased glycolysis may be an important cause of hyperlactatemia (Figure 1).

In conclusion, many variables measured in critically ill patients have been used to estimate severity of disease, prognosticate morbidity and mortality, evaluate costs of treatment, indicate specific treatment, and finally monitoring the adequacy of treatment and its timing. To understand the importance of an increased lactate level, it is crucial not only to consider anaerobic production but also aerobic mechanisms and changes in lactate clearance. Despite this complex evaluation, increased lactate levels usually reflect increased morbidity and high mortality. We believe lactate monitoring is a valuable tool in critically ill patients but we need further studies to systematize the use of this parameter with an unfulfilled potential.