Multiple primary lung cancer (MPLC) is a special type of non-small cell lung cancer. Although the differential diagnosis of MPLC from stage IV lung cancer remains controversial, MPLC can diagnosed according to the Martini-Melamed criteria in most cases (1). According to the TNM Classification system (7th edition, 2009), the lesions of MPLC should be staged independently and the higher-stage lesion should be regarded as the major lesion (2,3). The appropriate treatment should be determined accordingly,most researchers recommend surgery as the choice of treatment when conditions permit. Nevertheless, only few studies have reported on the long-term survival of patients with MPLC after surgical treatment. We hypothesized that the efficacy of surgical treatment for early-stage MPLC is equivalent to that of early-stage single primary lung cancer. In this study, we report on the surgical treatment of 31 patients with MPLC who were among 1,290 patients with non-small cell lung cancer who underwent surgery performed by a single surgeon group. Our report particularly focuses on the long-term survival of these 31 patients.

This study was approved by both the Ethics and the Academic committees of Peking University School of Oncology, and informed consent was obtained from all patients. All patient data were retrieved from our prospective database of patients with lung cancer treated by a single surgeon group at Beijing Cancer Hospital, Peking University. Between January 2000 and July 2013, 1,290 patients with lung cancer underwent surgery. Of these, 31 patients were diagnosed with MPLC according to the Martini-Melamed criteria (1).

The Martini-Melamed criteria were as follows: (I) tumors located in different segments, lobes, or lungs; (II) tumors developed independently from carcinoma in situ; (III) no evidence of tumor cells at the common lymphatic drainage site and no extrapulmonary metastasis observed at diagnosis; and (IV) synchronous or metachronous lung cancers, with similar or different histology and unique pathological characteristics. The Union for International Cancer Control TNM Classification of Malignant Tumors (7th Edition, 2009) was used for the pathological staging of each lesion. The exclusion criteria were as follows: (I) the presence of extrapulmonary malignancy or (II) a clear previous history of malignancy (possibility of the lung lesions being metastatic).

Follow-up examinations were conducted every 3 months for the first 2 years, every 6 months from 2 to 5 years, and once a year after 5 years postoperatively. The follow-up examination for metachronous MPLCs began 3 months again, after the second surgery. Preoperative and postoperative examinations included thoracic enhanced CT, head enhanced MRI/CT, bronchoscopy, bone scintigraphy, ultrasonography analysis of the supraclavicular region and abdomen, and whole body PET-CT/CT. Some patients underwent transbronchial needle aspiration, endobronchial ultrasonography, or mediastinoscopy. For these 31 patients, the follow-up duration was calculated from the first surgery for synchronous tumors and from the secondary tumor surgery for metachronous tumors. In this database, the last follow-up date was June 30, 2015, or the date of death, whichever came first. Follow up was completed in all patients. The median follow-up duration was 34.0 months (range, 17.7–167.6 months).

The operation sequence varied depending on whether the tumor was synchronous or metachronous, ipsilateral or contralateral, and major or minor, and on the pulmonary function of the major and minor lobes (Table 1). 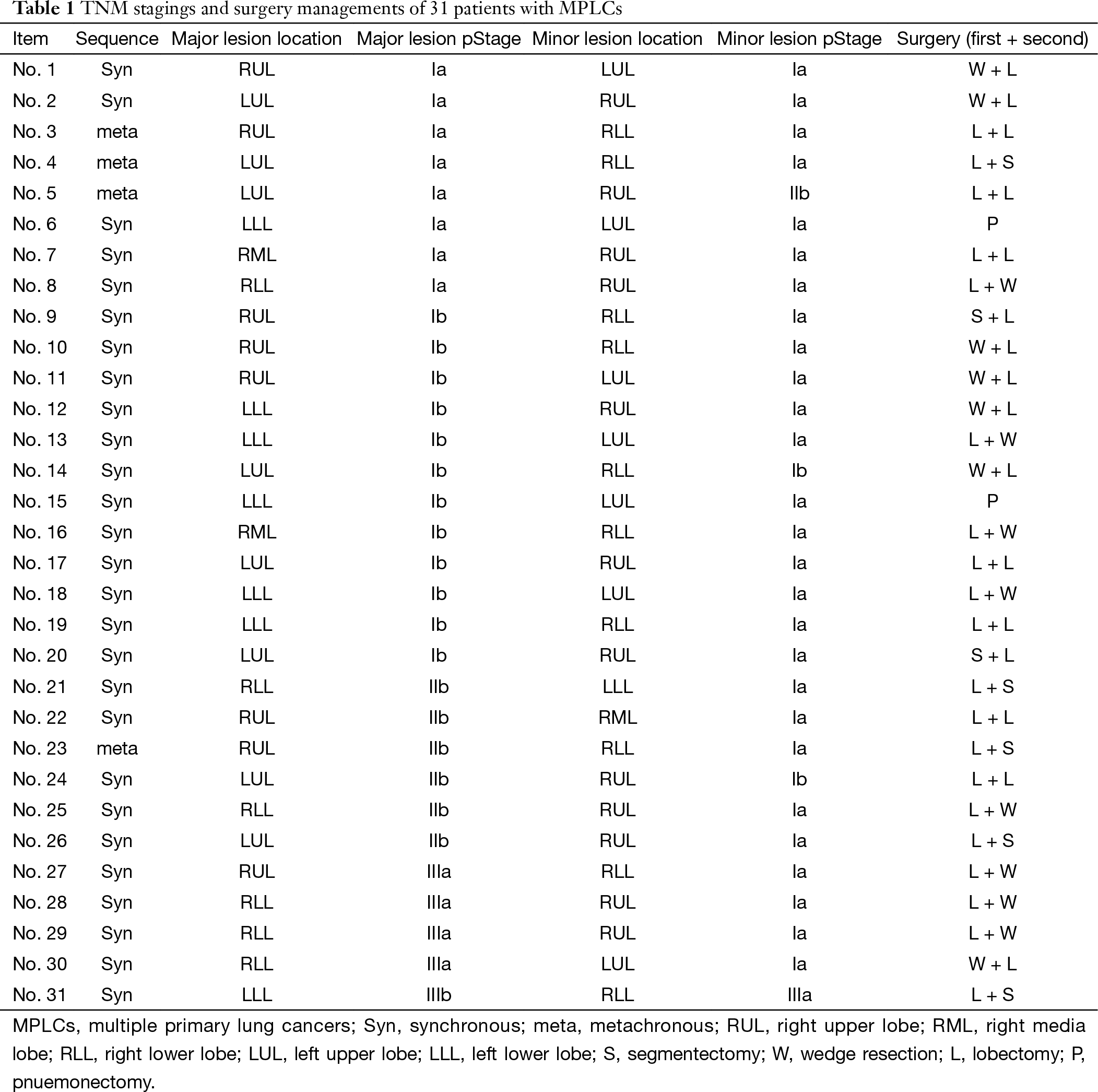 Histopathological analysis and TNM stages of the 31 patients 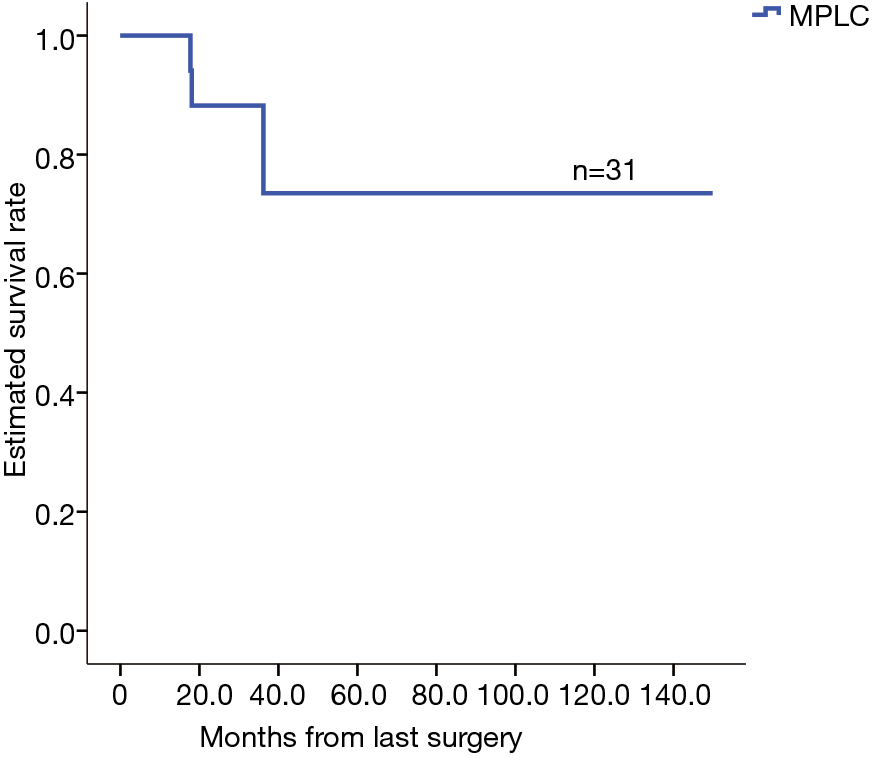 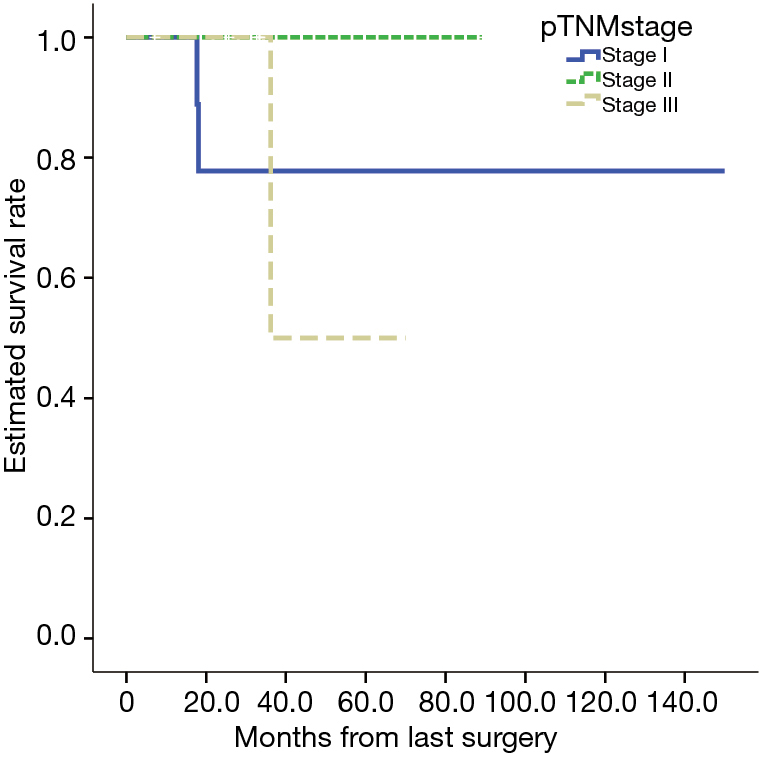 As early as in 1924, Beyreuther described the first case of double primary lung cancer, diagnosed on the basis of autopsy findings. In 1935, Lindburg et al. (4) reported the first clinical diagnosis of double primary lung cancer. In 1967, Auerbach et al. (6) reported that the incidence of MPLC was between 3.5% and 14.5%, on the basis of autopsy results. Currently, MPLC accounts for approximately 0.2–20% of reported lung cancer cases (7) and for 2.4% of the entire cohort (31/1,290) in this study. In 1975, Martini and Melamed (1) first developed diagnostic criteria for MPLC. In 2007, the American College of Chest Physicians developed new diagnostic criteria for MPLC (8), which provided clearer quantification and could be easily applied in clinical practice. However, lesions within the same lobe and multiple lesions with lymph node metastasis were both classified as intrapulmonary metastasis, resulting in an overly strict standard. Therefore, some patients may miss the opportunity for surgery. Although patients in this group were diagnosed according to the Martini-Melamed criteria, five patients with stage IIIA (N2) lesions were also considered to be MPLC because of the absence of conclusive evidence that the minor lesions originated from the major lesions.

In theory, either synchronous or metachronous multiple lung cancers can be explained in two ways: first, a lesion may metastasize from another one and second, the multiple lesions may be unrelated to each other and may all be primary lesions. The term MPLC is used to refer to the latter situation, where 2 or more unrelated primary malignant tumors occur simultaneously or successively in the lungs. In the clinical setting, achieving an accurate differential diagnosis remains a challenge. Clinical manifestations, imaging patterns, histological types, and genetic characteristics should be considered while making a diagnosis. Therefore, in each case, the final diagnosis of MPLC should be made by a multidisciplinary team composed of thoracic surgeons, medical oncologists, radiologists, pathologists, and even geneticists. The rapid development of genotyping techniques for lung cancer diagnosis in recent years may provide stronger support for the diagnosis of MPLC. In our study, one patient had lesions in different ipsilateral lobes. Although the postoperative histopathological type was adenocarcinoma in all lesions, examination of epidermal growth factor receptor (EGFR) gene mutations in various lesions showed that mutation types differed between each lesion. In short, MPLC should be clearly distinguished from stage IV metastatic lung cancer, in order to guide treatment. In this study, the 5-year survival rate of patients with MPLC was as high as 75.8%. In particular, the 5-year survival rate among patients without lymph node metastasis reached 85.7%, similar to that for single primary lung cancer (80.5%). Therefore, surgery should still be considered as the first choice of treatment for MPLC.

Oncologic considerations regarding the extent of surgical resection

In 1995, the clinical trial conducted by Ginsberg established the superiority of lobectomy over sublobectomy for the surgical treatment of lung cancer (9). However, recent retrospective studies showed that if the primary tumor was <2 cm in diameter and no lymph node metastasis was observed, particularly in cases of lesions with ground glass opacity (GGO) on imaging studies, the efficacy of sublobectomy was not inferior to that of lobectomy (10,11). Some ongoing randomized controlled clinical trials in America and Asia are exploring the non-inferiority of lobectomy for this type of small lesion compared to sublobectomy (JCOG 0802/WJOG3406L, CALGB 140503). We hope that the results of these trials would support the therapeutic principle of using sublobectomy to treat early MPLC. Accordingly, sublobectomy might become the primary choice of surgical treatment for MPLC.

Two principles are followed for the surgical resection of MPLC: maximizing tumor removal and maximizing preservation of pulmonary function. For synchronous contralateral MPLC, multistage surgery has been reported most often. The interval between two procedures was approximately 1 month. The reported surgical principles were as follows: (I) the most aggressive central lung cancer should be removed first, and then peripheral lung cancer; (II) larger lesions should be removed first, followed by smaller lesions; (III) a good pulmonary function reserve is required for simultaneous operations; and (IV) the tumors with mediastinal or hilar lymph node metastasis should be removed first, followed by the removal of those without lymph node metastasis. However, we believe that, for synchronous contralateral MPLC, tolerance of the second stage of surgery with respect to pulmonary function should be considered before performing the first stage of surgery. That is, pulmonary function should be preserved as much as possible during the first surgery. The five lobes of the human lung differ in terms of pulmonary function. The left upper lobe is the most important in terms of pulmonary function, followed by the left lower lobe, right lower lobe, right upper lobe, and right middle lobe. Lesions can be classified as either major or minor. For minor lesions located in the main lobes, particularly lesions commonly seen as GGO or small lesions (≤2 cm, sublobectomy, especially anatomic segmentectomy, should be performed if possible. For major lesions (solid, >2 cm) located in subordinate lobes, lobectomy should be performed without hesitation. For other combinations, treatment should be decided according on a case-by-case basis. We believe that multistage surgery is superior to simultaneous surgery and that video-assisted thoracic surgery is preferable. In addition, sublobectomy or lobectomy has little effect on pulmonary function (e.g., middle lobectomy) should be given priority to ensure the safety of the second stage of surgery. In this study, such situations were encountered in 13 cases. Of these, ten patients had synchronous contralateral MPLC, in whom large and small lesions could be distinguished, and sublobectomy was performed to remove the small lesions, followed by lobectomy to remove the contralateral large lesions. Three patients had synchronous contralateral MPLC, in whom sublobectomy could not be performed; thus, multistage lobectomy was performed to remove the bilateral lesions.

Thirty percent of patients with early-stage lung cancer died within five years after surgery in cause of recurrence or second primary lung cancer (12). The possible reasons are genetic susceptibility and field cancerization. Among these lung cancer survivors, early detection of the second primary lung cancer or solitary metastasis to lung, followed by appropriate local treatment such as surgery, promotes relatively good long-term efficacy. In this study, metachronous MPLC was detected during long-term regular postoperative follow-up in four cases. The second cancer occurred 24 to 48 months after the initial cancer surgery. Currently, the longest follow-up period is 167 months, with no reported deaths. Therefore, we believe that postoperative follow-up is of important clinical significance for the early diagnosis and treatment of recurrence or second primary lung cancer and for improving patients’ quality of life and long-term prognosis.

The debate on the need for adjuvant chemotherapy

Another currently controversial topic is whether patients should receive adjuvant therapy after surgery. The supporters believe that postoperative chemo could effectively reduce the risks of recurrence and metastasis, which, however, only benefits patients with lymph node metastasis. In contrast, Voltolini et al. (13) and Jung et al. (7) reported that patients with MPLC would not benefit from adjuvant therapy. However, in their studies, patients with lymph node metastasis accounted for a very small proportion of the patient population. Because only five patients who had MPLC in this study also had lymph node metastasis, we could not determine whether postoperative chemo would benefit patient survival. Nevertheless, we believe that the decision to administer adjuvant chemotherapy in cases of MPLC should depend on the T and N staging of the major lesions and should be made in accordance with the existing guidelines for chemotherapy, instead of treating MPLC as metastatic lung cancer.

This study was limited by the small number of cases analyzed. Although the database is prospectively maintained, the study was retrospective in nature. Therefore, more cases should be evaluated in prospective studies.

In summary, synchronous and metachronous MPLCs should be staged independently, and surgical treatment should be opted for in cases of early-stage disease. The surgical strategy should be evaluated on the basis of tumor characteristics (early-stage principle) and pulmonary function (safety principle). The data from this study clearly show that surgery for the treatment of MPLC exhibits equivalent efficacy to that for the treatment of single primary lung cancer.