The immune response of the host against invading pathogens such as bacteria, fungi, and viruses is clinically manifested as sepsis. Sepsis is diagnosed when there is evidence for the presence of an infection and the host has clinical signs of the systemic inflammatory response syndrome (SIRS). Sepsis is characterized as severe when complicated by organ dysfunction, while septic shock is defined as sepsis with concurrent acute circulatory failure not responding to aggressive volume resuscitation.

Sepsis is the leading cause of death in intensive care unit (ICU) patients. Despite the significant improvements in supportive care and the prompt administration of broad spectrum empirical antimicrobial therapy, mortality rate is still around 30% (1).

The pathogenesis of the septic process is extremely complex and involves a dynamic interplay between the pathogen and the host immune system. Although simplistic the immune response to sepsis can be divided in two distinct but overlapping phases (2). During the initial phase of sepsis, an over-activation of the immune system takes place in an effort to eliminate the invading pathogen. This hyper-inflammatory phase is mediated by a “cytokine storm’’ of pro-inflammatory cytokines such as TNF-α, IL-1, and IL-6, and if left uncontrolled results in excessive tissue damage manifesting as septic shock and/or multi-organ dysfunction (MOD). Termination of the inflammatory process and restoration of immune system homeostasis occurs immediately after control of infection and is mediated by secretion of anti-inflammatory cytokines such as IL-10 (3). Prolonged or intensive hypo-inflammatory state may lead to immune effector exhaustion finally resulting in immune-suppression that is frequently observed in the late phases of sepsis (2). During this late immune-suppressive phase, patients may develop secondary infections such as ventilator associated pneumonia or bloodstream and other organ specific infections by weakly virulent pathogens such as Acinetobacter, Stenotrophomonas, Enterococus and Candida (4). Secondary infections result in repeated cycles of hyper and hypo-inflammatory phases further complicating the septic process. Additional evidence for the sepsis-associated immunosuppression is the high incidence of herpes virus reactivation that occurs in patients with prolonged septic episodes (5). These clinical observations are supported from in vitro data showing impaired cytotoxicity and increased apoptosis of immune effectors from septic patients (6).

Interleukin-1 receptor antagonist (IL-1Ra) is a plasma protein that inhibits both IL-1a and IL-1b after binding to the type 1 IL-1 receptor (7). Anakinra is a recombinant human IL-1Ra. The efficacy of Anakinra as an immune-modulator in patients with sepsis was compared with placebo in a double blind phase III trial. In this trial anakinra failed to prolong 28-day survival, but in a subgroup analysis survival was improved in patients with septic shock or MOD in the arm of anakinra (8). Based on these data a phase III trial testing the efficacy of anakinra in patients with septic shock and/or severe sepsis was conducted, and again failed to show any survival benefit (9). However, in a subgroup analysis IL-1 inhibition improved survival in patients with severe sepsis and features of macrophage activation syndrome (MAS) (10). The beneficial efficacy of anakinra in this group of patients should be clarified in a prospective randomized trial.

Most of the clinical trials conducted in the past were based on the notion that sepsis mortality was mainly due to an uncontrolled inflammatory response, and therefore were focused on testing the effect of blocking the hyper-inflammatory phase by using various agents including corticosteroids, and anti-endotoxin or anti-cytokine antibodies. These studies failed to show therapeutic benefit, and moreover in many cases excessive anti-inflammatory inhibition had a negative impact on the outcome of septic patients (11-13).

Reasons for failure of agents targeting the hyper-inflammatory phase

Failure of pro-inflammatory cytokine inhibition to improve the outcome of septic patients might be attributed to several reasons:

The significance of the balance between pro and anti-inflammatory cytokines in the outcome of sepsis has been shown also in human studies. In a previous study including patients with sepsis a TNF-α/IL-10 ratio during the first 48 hours equal to one is a good predictor of improved outcome (17).

As already mentioned most of the patients admitting in ICU have survived the hyper-inflammatory stage and are already in a state of immune-suppression and in risk for secondary infections. Since immune-suppression is considered as a significant contributor of sepsis mortality, harnessing the host immunity by various agents is a reasonable alternative. Based on this notion, previous trials attempted to shorten the degree and the length of the immune-suppressive phase by using immune-stimulators such as interferon-gamma (IFN-gamma), granulocyte macrophage colony stimulating factor (GM-CSF), and granulocyte colony stimulating factor (G-CSF). However, the clinical benefit produced by these agents was modest (18,19).

A promising cytokine with an immune stimulating effect and the ability to restore immune function in various diseases is interleukin-7 (IL-7). IL-7 is a cytokine with a pleotropic action on various immune cell subsets including proliferation of both naïve and memory T-cells. Administration of IL-7 to patients with cancer and HIV infected patients resulted in significant increase of peripheral blood CD4 and CD8 without expansion of the T-regulatory cell pool (20). The immune stimulating effect and the good safety clinical profile makes IL-7 a promising agent that need to be tested in future clinical trials in sepsis patients.

Recently the scientific interest has focused on the manipulation of immune checkpoint inhibitors for the treatment of patients with cancer. An interesting observation in patients with sepsis is the increased expression of PD-1 on T-cells as an important mediator of the immune-suppressive phase. Indeed, animal studies have already shown that blocking of PD-1/PD-L checkpoint results in improved survival of the septic mice (21). Moreover, human trials have shown that PD-1 overexpression is associated with impaired T-cell function and mortality from secondary infections in patients with established sepsis (22). These data suggest that blocking immune checkpoints with the aim to prevent sepsis-associated immune-suppression is a promising therapeutic option that deserves testing in human clinical trials.

Balanced monitoring of both hyper-inflammatory and immunosuppressive phase

Pro-inflammatory and anti-inflammatory cytokines mediate their effect through a common downstream signaling pathway that consists of different tyrosine kinase of Janus family (JAKs) interacting with signal transducer and activator of transcription (STAT) proteins. Inhibition of JAK proteins theoretically offers the potential for a global immune-modulation affecting both phases of sepsis, e.g., preventing the excessive tissue damage associated with hyper-inflammation and the over expression of anti-inflammatory cytokines resulting in immune paresis and death from secondary infections. Ruxolitinib (Ruxo), a JAK1 and JAK2 small molecule inhibitor recently approved for the treatment of patients with primary and secondary myelofibrosis, is a candidate drug for testing in future clinical trials (23).

In a previous study performed by our team, we examined the effect of Ruxo in a mouse model of sepsis due to Candida albicans. Fungal loads and inflammation scores were determined in various affected organs, while levels of pro and anti-inflammatory cytokines were measured in the serum of infected animals. Mice infected with Candida were treated with increasing doses of Ruxo (1.5–50 mg/kg). An inverted-U correlation between Ruxo dosing and median survival time (MST) was observed. High dose Ruxo was associated with the worst survival, while progressive de-escalation of dosing resulted in gradual increase of MST. Low dose (6.25 mg/kg) Ruxo produced the best survival and mice treated with this dose had increased survival as compared with control animals. The therapeutic benefit of Ruxo was lost after further reduction of dose. Thus, low dose Ruxo (6.25 mg/kg) was found as the optimal dose for treatment of septic mice. Mice treated with high dose Ruxo had the higher fungal loads and lower inflammation scores as compared with control mice, meaning that intensive abrogation of the inflammatory phase results in overwhelming infection. On the contrary, mice treated with the optimal dose of Ruxo had the same fungal load but lower inflammation score as compared with placebo, meaning that increased survival is due to prevention of excessive tissue injury and not to an antifungal effect of the study drug. Interestingly, mice treated with the optimal dose of Ruxo had a balanced serum TNF-α/IL-10 ratio equal to one, as a further proof of the concept that a balance between pro- and anti-inflammatory signalling is required for a successful outcome (24).

Data from animal studies support the concept that any immune-modulating intervention in sepsis should also take into account the immunosuppressive phase that may be exacerbated by an uncontrolled inhibition of the early hyper-inflammatory phase. Balanced monitoring of both phases may result in prevention of excessive tissue damage through control of hyper-inflammation and without leading to significant immune-suppression (Figure 1). Administration of agents with immune-stimulating activity such as IL-7 and immune checkpoint inhibitors, with the aim to alleviate immune-suppression should be tested in clinical trials. Inhibition of the JAK-STAT pathway is another therapeutic target with promising efficacy in animal studies. The efficacy of Ruxolitinib as an immune-modulator in sepsis should be further tested in human trials. 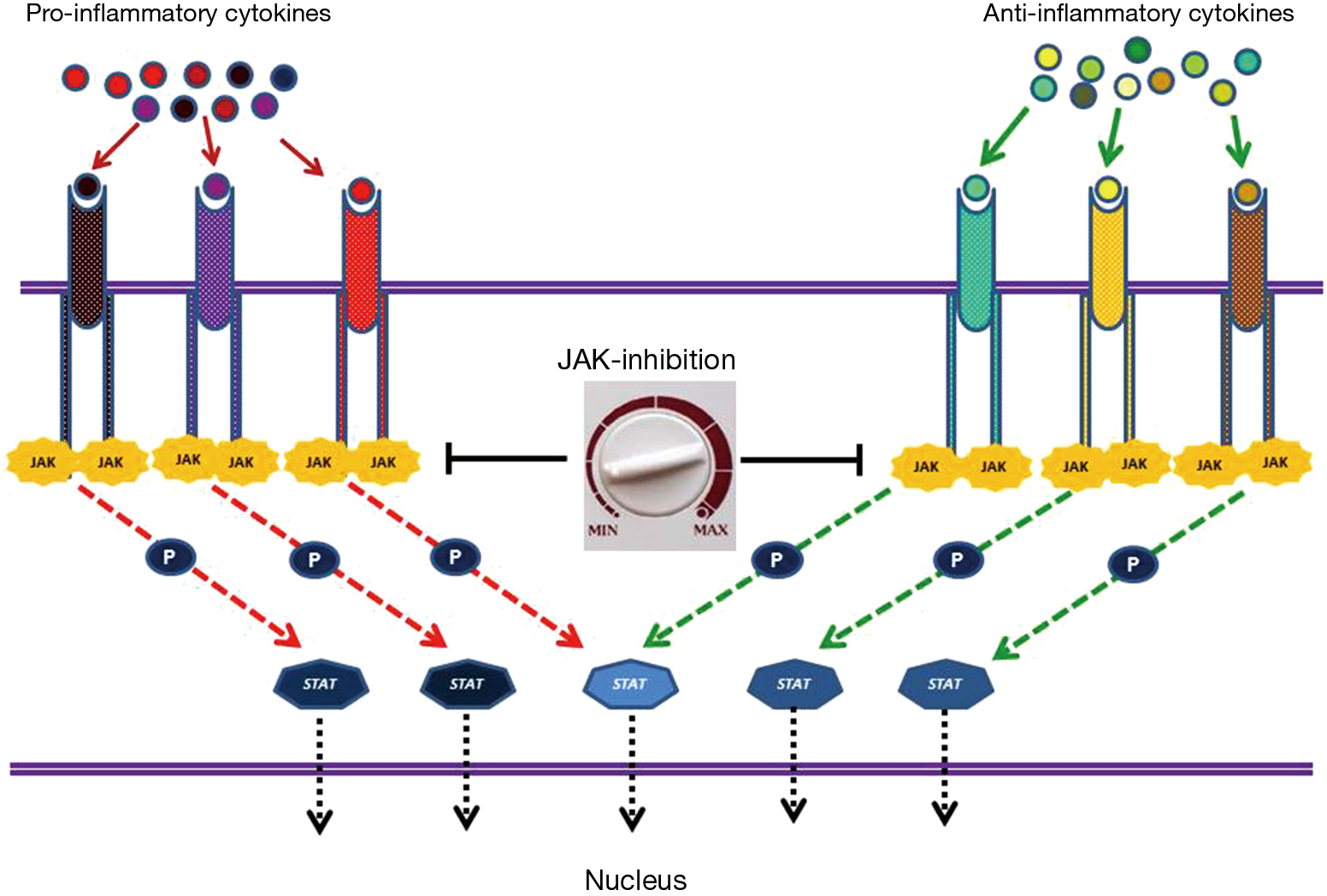