Lung cancer remains the main cause of cancer-related deaths in the United States, accounting for about 27% of all estimated cancer death in 2014 (1). In China, lung cancer is also regarded the most threatening neoplasm, with the incidence of 46.08 (1/105) cases and the mortality of 37.00 (1/105) per year (2). Non-small cell lung cancer (NSCLC) is the most commonly diagnosed subtype of lung cancer. Despite advances in clinical and experimental oncology, the long-term survival remains dismal. Moreover, data from the IASLC suggested that 65% of NSCLC patients were classified at advanced stage at diagnosis (3). Additionally, the lack of efficient strategies for screening or early diagnosis contributes to the poor prognosis and lower rate of curability for lung cancer (4). Hence, it is essential to identify a novel sensitive and specific biomarker, which is potentially applicable for the early detection and clinically correlated with the prognosis of NSCLC.

MicroRNAs (miRNAs), a class of small well-conserved non-coding RNAs, play a vital role in cell biology, as they control expression of more than 30% of human genes (5). They result in gene silencing by binding to target sequences on message RNA (mRNA), and then block translation. In 2005, Johnson and his colleagues first proposed the connection between miRNA expression and genes involved in lung cancers (6). Since then, extensive evidences indicated that dysregulation of miRNAs is involved in carcinogenesis, progression and metastasis in a variety of human malignant tumors including NSCLC (7). Recently, a prospective investigation suggests that miR-21 and miR-155 are reliable predictors for metastasis, relapse and unfavorable survival of NSCLC patients (8). Additionally, the expression levels of miR-378 and miR-451 are reported to be associated with lymph nodes or brain metastases (9,10).

Limited data were reported to document the relationship of miR-452 with prognosis of malignant tumor patients. Our previous investigation has stated that the expression level of miR-452 in NSCLC was found to be related with tumor stage and the extent of lymph nodes metastasis in a cohort of 60 patients and up-regulation of miR-452 was confirmed to inhibit the invasive capability of NSCLC cells in vitro (11). Nevertheless, the prognosis value of miR-452 in NSCLC has not yet been documented. In this cohort, we used an expanded cohort of 161 patients and aimed to investigate the value of miR-452 for the prognosis of patients with NSCLC. In addition, we also investigated the expression level of miR-452 in NSCLC and its association with tumor size, tumor differentiation and lymph node metastasis.

The study participants involved 161 Chinese patients with NSCLC, who had received radical lung cancer resection at the Department of Thoracic Surgery, the First Affiliated Hospital of Nanjing Medical University between January 1st, 2010 and December 31st, 2013. All of the patients satisfied the following selection criteria: (I) diagnosed with primary NSCLC in stage I, II, III according to the 7th edition of UICC TNM classification of lung cancer (12); (II) snap-frozen (−80 °C) tumor samples and the corresponding adjacent tissues available for RNA analysis; (III) provided with detailed follow-up and clinical data; (IV) received no pre- or post-operative adjuvant therapy; and (V) samples independently diagnosed by two different pathologists. Both informed consent from all of the patients and approval from the local Institutional Ethics Committee were obtained.

The primary outcome was overall survival (OS), which was regarded as the interval from operation to death by any cause, while the secondary outcome was disease-free survival (DFS) defined as the time from operation until first recurrence or death by any cause (13). Telephone follow up was performed for all the included patients and the deadline for completing the interview was September 30th, 2015. The mean follow-up period was 29.9 months (range, 12.0–59.0 months; median: 30.0).

The expressions of miR-452 and U6 were estimated using the method of 2-∆Ct in this study. The chi-square test was used to test the significant differences in observed variables. Survival curves were presented using Kaplan-Meier analyses and compared using the log-rank test. Multivariate Cox proportional hazards method was applied for documenting the correlation of the variables and patients’ survival time. SPSS 19.0 (SPSS, Chicago, IL, USA) and GraphPad Prism 5.01 (GraphPad Software, Inc., La Jolla, CA, USA) software were used for analysis. Statistical significance was obtained when P value was less than 0.05.

Firstly, to investigate the role of miR-452 in human NSCLC, we tested the expression levels of miR-452 in tumor tissues and corresponding adjacent specimens by using real-time quantitative PCR with the endogenous control (U6). As shown in Figure 1, we confirmed that miR-452 expression level was significantly decreased in NSCLC tumor tissues compared with adjacent tissues. This result indicated that miR-452 probably plays a crucial role in NSCLC. 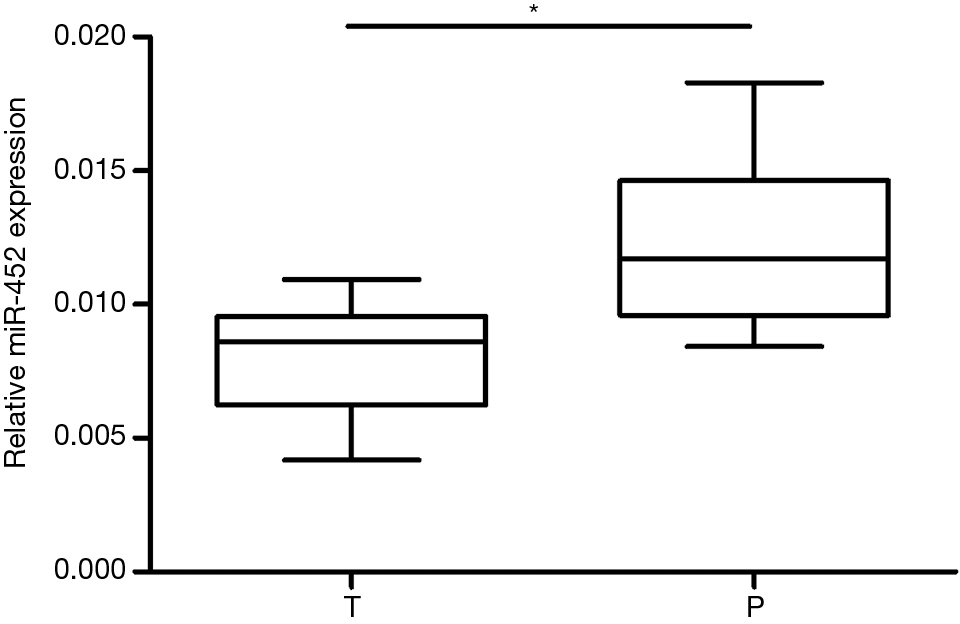 Eventually, The Cox proportional hazard regression model was used to identify whether miR-452 expression level was an independent risk factor for prognosis of NSCLC patients. Univariate analysis was initially conducted prior to multivariate analysis, indicating that miR-452 were significantly correlated with OS and DFS (P=0.006 and 0.031, respectively). Comparably, the results of multivariate analysis also illustrated that the increased expression of miR-452 was an independent prognostic biomarker for suggesting favorable OS and DFS in NSCLC patients (P=0.027 and P=0.038, accordingly). In addition, the extent of lymph node metastasis and the TNM stage also have the potential to independently predicate OS and DFS in NSCLC. However, in this cohort, other factors such as histology type, differentiation grade and tumor size showed no remarkable value in predicting prognosis (Tables 2 and 3).

The development and progression of lung cancer is a typical and complicated process. Mounting investigations have focused on identifying miRNAs involved in development and progression of lung cancer, and they probably provide us with a series of novel potential diagnostic biomarkers for predicting and treating NSCLC patients. In the past decade, expression of miRNAs in NSCLC, such as all members of let-7 family, was confirmed to associate with prognosis (14,15). Recently, Skrzypski and his colleagues have conducted a study to comprehensively evaluate the prognostic value of miRNAs expression in operable NSCLC patients (16). After screening all of 677 miRNAs in fresh-frozen tumor samples, they eventually identified miR-662, -192 and -192* as prognostically relevant miRNAs. Additionally, a newly published meta-analysis study has shed light upon the role of circulating and tissue miR-21 in determining its diagnostic and prognostic value in cancers, which quantitatively stated that miR-21 over-expression predicted unfavorable survival results (17).

However, miR-452 expression in malignant tumors is controversial. Although miR-452 was also found to be downregulated in a variety of malignancies such as prostate cancer (18), breast cancer (19) and glioma (20), this miRNA was highly expressed in esophageal cancer (21) and urothelial carcinoma (22), as well as in hepatocellular carcinoma (23). Our previous study has documented that miR-452 expression was down-regulated in human NSCLC tissues compared with the corresponding adjacent tissues (11). The heterogeneity of miR-452 expression in diverse human malignancies could be interpreted by the fact that the biological activities of miRNAs differed in various micro-environments (20).

Previously, Liu et al. detected the expression of miR-452 in clinical glioma tissues and found that miR-452 were inversely correlated with WHO tumor grades and patients survival by directly targeting and suppressing multiple regulators such as BMI1 (B-cell specific Moloney murine leukemia virus integration site 1), LEF1 (lymphoid-enhancer binding factor 1) and TCF4 (T-cell factor 4). These stemness regulators reduced stem-like traits tumorigenesis (20). Furthermore, functional studies suggested that miR-452 inhibited proliferation, migration and invasion of prostate cancer cells via regulation of pathways of cell cycle and cellular adhesion and motility, and finally associated biochemical recurrence (18). In our previous study, we found that higher expression of miR-452 could inhibit NSCLC cell invasion and metastasis capability by modulating BMI1 expression, suggesting that miR-452 plays an important role in development of NSCLC (11). In the current study, miR-452 expression was detected in 161 paired NSCLC and adjacent tissues by using real-time PCR, and its expression level was also associated with WHO tumor stage and lymph nodes metastasis. To assess the prognostic value of miR-452 expression in NSCLC, Kaplan-Meier survival curves were constructed and then compared by the log-rank test, and we found that NSCLC patients with higher miR-452 expression had longer OS and DFS time. To further determine the possibility of miR-452 as an independent risk factor for prognosis, the level of miR-452 expression and other clinicopathological factors were evaluated by univariate and multivariate Cox regression analyses. The expression level of miR-452, accompanied by the statue of lymph node metastasis, was regarded as an independent prognostic factor for NSCLC, indicating that miR-452 may be one of novel molecular marker candidates for predicting the aggressive tumor development and favorable prognosis of NSCLC. But tumor size was not regarded as the independent predictors for OS or DFS in this cohort. That was probably due to the selection bias, as we enrolled relatively more early stage NSCLC patients (56/161 patients with diameter less than 3 cm, and 53/161 with N0).

Taken together, our study initially showed that patients with high level of miR-452 expression in tumor tissues would have a favorable prognosis for NSCLC patients. This result may encourage more concerns to its functional study in the future. Before miR-452 accepted as a novel therapeutic target of NSCLC, other potential mechanisms involving the role of miR-452 in NSCLC and large worldwide population-based investigations await to be done.

We would like to acknowledge Meilin Wang, Ph.D. for language revision and all revivers for their helpful comments on this manuscript.