It has been argued that rehabilitation plays an important role in lung transplantation (LTx) candidates, because patients with chronic lung diseases are medically complex and a preoperative program will increase patients’ comprehension of their illness (1). In addition, as LTx candidates with chronic disease are more prone to exercise limitations, preoperative physiotherapy (PP) can improve exercise tolerance (1), which in some patients, is severely impaired, often leaving them housebound. Specifically, a rehabilitation program including supervised aerobic and strengthening exercises can significantly improve symptoms and physical activity levels in idiopathic pulmonary fibrosis (IPF) patients (2). IPF is a chronic progressive disease of unknown etiology that affects mainly adult men; the symptoms of IPF are mainly shortness of breath and cough. Some recent evidence has shown that new drugs may slow the decline in vital capacity (3). LTx is the only treatment that improves the survival of IPF patients, and should be considered 3–6 months after diagnosis (4), because the average survival rate at diagnosis is about 2–3 years. However, patient selection for LTx remains controversial due to the age of these patients.

One might speculate that PP would reduce postoperative complications and the hospital length of stay (LOS) after LTx. The aim of this study was to answer this question: In patients with IPF qualifying for LTx, is PP effective in improving postoperative outcomes and reducing LOS after transplantation?

Six major databases, namely PubMed, CINHAL, Web of Science, LILACS, Cochrane Library, and PsycINFO, were searched up to December 2015 using the string: (“Physical Therapy Modalities” OR rehabilitation OR “physical therapy” OR physiotherapy) AND (“Idiopathic Pulmonary Fibrosis” OR “Idiopathic pulmonary fibrosis” AND “lung transplantation”). We did not apply limits to publication date, gender, or language. The search examined the title, abstract, and keyword fields.

Citations were accepted if they discussed preoperative physiotherapeutic treatment in patients with IPF waiting for LTx.

Studies discussing pathologies other than IPF and those considering physiotherapeutic treatment in patients not undergoing LTx were excluded.

In total, 153 papers were found, and after duplicate removal, 117 citations were screened (Figure 1). After the full texts were read, three papers met the inclusion criteria and were included (Table 1). All of these papers had an observational design. In total, 55 subjects with IPF and awaiting LTx were observed. Two of the three studies used the SF-36 questionnaire, which seemed to be the most suitable tool for evaluating the health status of IPF patients. The main results obtained in the three studies are shown in Table 1. 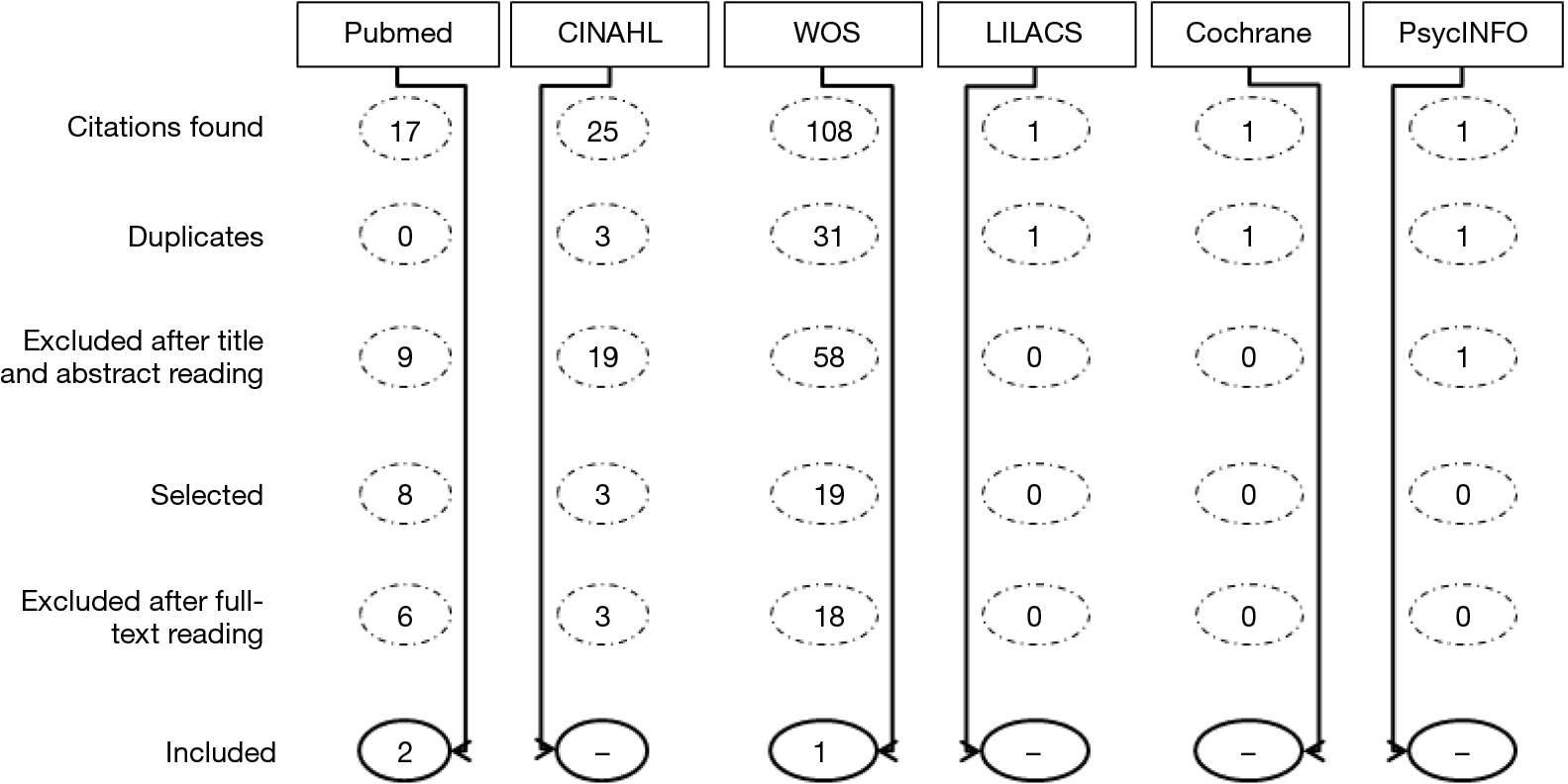 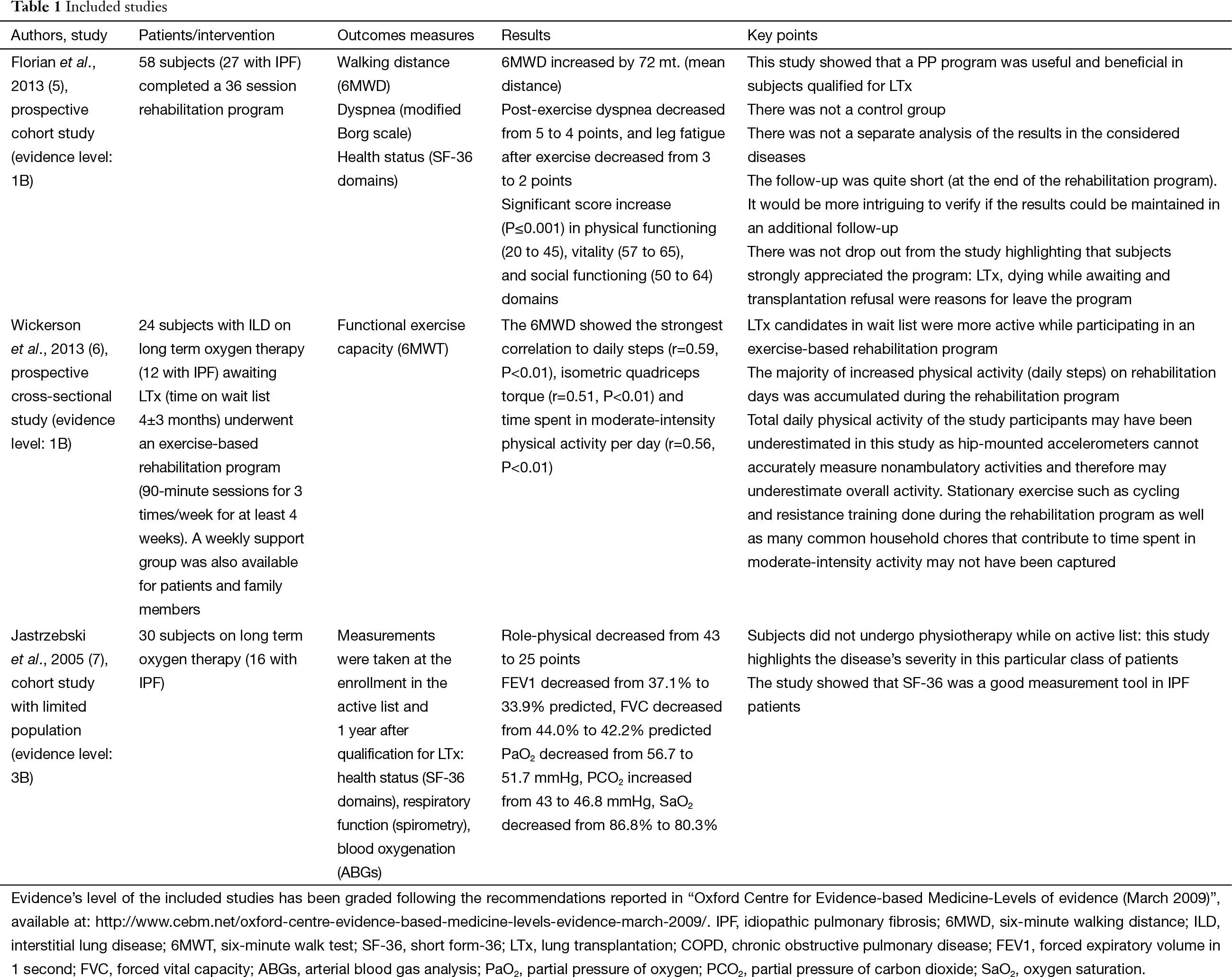 In a prospective study conducted in 2013, Florian et al. (5) found that the motor and respiratory performance of patients on the active list for LTx improved following a 36-session rehabilitation program (90 min, three times per week). The physiotherapy consisted of respiratory exercises, muscle strengthening, and aerobic exercise on a treadmill. The preoperative rehabilitation program also involved a psychiatric evaluation, nutritional counseling, social assistance, and educational lectures.

In another prospective study conducted in 2013, Wickerson et al. (6) found that an exercise-based rehabilitation program contributed to improving the physical activity levels in a cohort of candidates for LTx with IPF. In the Wickerson study (6), rehabilitation included stretching and resistance and endurance training (treadmill and cycle ergometer). LTx candidates with ILD were more active on rehabilitation than on non-rehabilitation days (daily steps, 3,780±2,196 vs. 2,138±1,353; P<0.001). During the 90-minute rehabilitation sessions, the number of steps taken comprised 58% of the total daily steps, and the time spent in moderate-intensity activity per day was 4.5 (interquartile range, 1.5–17) min, compared with 2 (1–3.5) min. This finding should be considered when proposing exercise to IPF patients. In fact, due to disease characteristics, IPF patients are prone to exercise limitations.

In IPF patients, Jastrzebski et al. (7) reported a positive correlation between the arterial blood gas level and the SF-36 domains general health, emotional functioning, and mental cumulative score. They found that patients with a higher PaO2 reported better general health, and that the FEV1 was positively correlated with social functioning and the level of body pain.

Patients with IPF are eligible for LTx, which is a viable therapeutic option (4,8), particularly in those with chronic respiratory insufficiency, despite high peri- and postoperative morbidity and mortality rates (9); simultaneously, pulmonary rehabilitation and physiotherapeutic intervention are indicated in patients preparing for LTx (1) to enhance muscular function (9). Skeletal muscle weakness is usually observed, but not inspiratory muscle weakness, so the preoperative training of these muscles may not be specifically indicated (10) unless these patients are already hypercapnic because the presence of hypercapnia indicates respiratory pump failure and is associated with a very poor prognosis (11). A randomized clinical trial by Hulzebos et al. suggested that preoperative inspiratory muscle training may reduce the incidence of postoperative pulmonary complications in high-risk patients undergoing coronary artery bypass grafting surgery, even when they are not hypercapnic (12). The use of inspiratory muscle training has been shown in animal studies and human studies to be deleterious, and it may produce injury to the diaphragm, although it may benefit the external intercostal muscles (13-15).

Based on our findings, it is impossible to establish whether PP is effective in improving postoperative outcomes and reducing the LOS after LTx in IPF patients. In fact, we were unable to find any citations addressing our question. Conversely, it was clear that pulmonary rehabilitation and exercise, when appropriate, should be considered as a non-surgical therapeutic option in IPF patients (1,2,16). Furthermore, it seems that a pre-transplant rehabilitation program may improve physical activity levels in LTx candidates on a waiting list (6). Our initial question remains unanswered because no study has demonstrated the effectiveness of PP in reducing LOS and improving clinical outcomes after LTx in IPF patients. In this regard, the great difficulty in evaluating the course of IPF patients while they are on an active list should be considered. This important issue must be considered while programming health policies and scheduling appropriate and effective rehabilitation treatment for LTx candidates. Additionally, it could be surmised that physical activity in IPF candidates for LTx can be also planned for the home environment although the supervised exercise seems to be more efficacious because the physical activity during rehabilitation can be greater (6). However, as commonly seen in daily practice, those subjects who arrive at LTx in better physical shape are likely to face their postoperative course more successfully. A PP program may facilitate postoperative recovery after LTx; unfortunately, it is not possible to define which elements of PP influence postoperative recovery after LTx, particularly in terms of LOS and clinical outcomes.

This study was restricted to a very select population (IPF subjects waiting for LTx); thus, we are aware of the difficulty in answering our initial question, which was based on the assumption that we could find published studies. Despite the small number of citations retrieved, even though six major databases were searched, those selected did strictly fit our search question, meeting the inclusion criteria. Although IPF was the most common condition, the included studies investigated subjects with different diseases; in light of this, it was not possible to relate the findings of this review to various sub-groups. Strictly speaking, the main objective of the study was not satisfied because no citation was found that addressed the selected topic; however, this research has contributed to better understanding of the need to investigate PP from a cost-effectiveness point of view. Ultimately, the only way to answer the question of whether PP is effective in reducing LOS and improving clinical outcomes will be to compare series of patients who underwent LTx and successfully recovered from surgery with subjects who did not attend PP prior surgery but also successfully recovered from LTx.

The effectiveness of PP in improving postoperative outcomes and reducing LOS following LTx remains unclear, although it appears to benefit IPF patients who qualify for LTx by improving their health status, physical activity levels, and respiratory-related symptoms. Our question underlines the importance of investigating physiotherapy in these patients.