Ectopic adrenocorticotropic hormone syndrome (EAS) is caused by secretion of adrenocorticotropic hormone (ACTH) from the tumor outside the pituitary, and may result in overproduction of cortisol and related clinical manifestations. It is rare, and between 10% and 20% of Cushing’s syndrome (CS) could be found associated with an ectopic tumor (1). In most reports, the major origins of the tumors were in the chest cavity, 50% of them were caused by bronchopulmonary tumors, and 30% were caused by mediastinal tumors (2). The diagnosis of EAS remains difficult in spite of the development of clinical biochemical and imaging technology, especially in localization of the ectopic tumors. Surgery is now commonly regarded as an effective treatment in cases where EAS is diagnosed and the ectopic tumor is localized.

To further understand the clinical aspects of the disease, we studied the cases diagnosed as EAS with suspected tumors in the thoracic cavity, with surgery in the previous 18 years. The localization of the ectopic tumor, the procedures of surgery, and postoperative outcomes were summarized.

This retrospective study was undertaken at the Department of Thoracic Surgery, Ruijin Hospital Shanghai, approved by the Regional Ethics Committee of our hospital, and after patients’ informed consent. We studied 23 cases of CS due to ectopic ACTH secretion accompanied by surgically removed suspected intra-thoracic tumors, between January 1997 and December 2014, including 10 male patients and 13 female patients between the ages of 27 to 73 years (median age, 40 years).

All patients were diagnosed with EAS by the Department of Endocrine Disease before transfer to our department for surgery, and the initial responses to medical treatment were not satisfactory. The variable clinical presentations associated with hypercortisolism were confirmed, including metabolic features such as hypertension (87.0%), hypokalemia (91.3%) and hyperglycemia (69.6%), general features such as concentric obesity (78.2%) and edema of the lower extremities (60.8%), skin features such as hirsutism (69.6%) and acne (73.9%), and gonad features such as menstruation irregularity (76.9%).

Computed-tomographic (CT) scan, magnetic resonance imaging (MRI), or positron emission tomography (PET)/CT were used in the examinations for localization studies. The tumors from bilateral adrenal glands or abdomen were excluded. Solid nodules inside the thoracic cavity were confirmed, including mediastinal nodules (n=17), lung nodules (n=4), bronchus nodules (n=1), and lung nodule combined with mediastinal nodule (n=1) (Table 1). The diameter sizes of the nodules ranged from 1 to 8 cm, 3.16 cm in average. 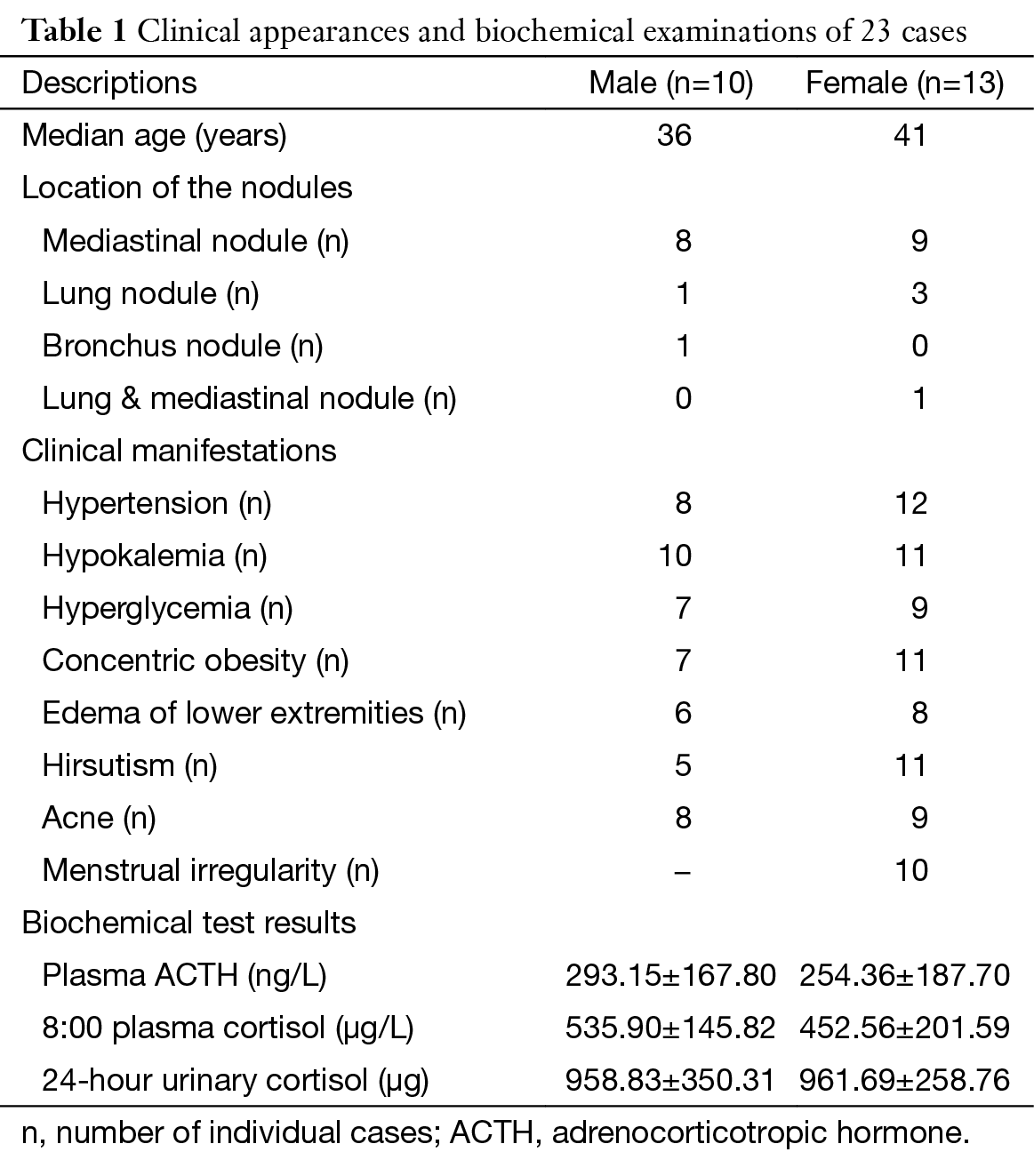 All patients underwent surgery to remove the suspected intra-thoracic tumors. The treatments for controlling high blood pressure, high glucose levels, and low potassium levels were given before surgery. Glucocorticoid replacement applied in cases of hypocortisolism after surgery. Usually, hydrocortisone was given orally 20–30 mg per day as glucocorticoid replacement. The surgical approach and procedure were selected according to the location and size of the tumor. The surgeries were performed by minimal intercostal incision in 13 cases, by video-assisted thoracoscope in eight cases, and by median sternal incision in two cases. The tumors were removed by excision of the mediastinal/thymic tumor accompanied by thymectomy in 17 cases, by pulmonary lobectomy in four cases, by lobectomy with mediastinal tumor resection in one case, and by bronchial tumor resection in one case.

Biochemical data of fasting blood-glucose, blood pressure, plasma potassium, plasma ACTH (8 am), plasma cortisol (8 am) and 24-hour UFC were detected. Comparisons of these data between pre-operative and post-operative periods were made.

SPSS version 21.0 software (SPSS, Chicago, IL, USA) was used in statistical analyses. The quantitative data were presented in the form of mean ± standard deviation (SD). All P values less than 0.05 were considered significant.

Among the 23 patients, 19 patients were confirmed as EAS with intra-thoracic tumors associated with ectopic ACTH production after surgery, while the ectopic ACTH-secreting source remained occult in the other four patients. These four patients were transferred back to the Department of Endocrine Disease for continuing medical treatment.

The pathologies of the nodules in the other four cases of occult source were pulmonary aspergillosis for three cases and mediastinal angiomatous hyperplasia for one case (Table 2).

The postoperative hospitalization period for all 23 patients was 7–15 days. They were all discharged without complications. The plasma ACTH, plasma cortisol, and 24-hour UFC were all decreased significantly in the 19 patients in whom the tumors were localized as the ectopic ACTH secreting sources. The cases of hypokalemia (19/19), hypertension (13/16), and hyperglycemia (13/14) were consequently recovered to normal ranges without medication, and menstrual irregularities disappeared in some females (8/10) (Table 3).

Follow-ups were conducted for the 19 patients in whom the ectopic tumors were removed. The duration of follow-ups were from 5 to 102 months (median, 45 months), and three patients lost contact. There was no death within 30 days after surgery. One patient died within 1 year, three patients died within 3 years and six patients died within 5 years. The 1-year survival rate was 92.9% (13/14) and the 3-year survival rate was 72.7% (8/11), while the 5-year survival rate was 40% (4/10). Death occurred in six patients totally, including four cases of thymus NET, one case of pulmonary carcinoid, and one case of mediastinal carcinoid. The causes of death consisted of tumor relapse in three cases, distant metastasis in two cases, and one case of an unrelated cause. The manifestations of CS recurred in six patients, with tumor relapse in four cases, and distant metastases in two cases.

Surgery was repeated for the relapsed tumors for three patients. One patient died in 1 month and another died in 1 year, while the third survived and the symptoms of CS again disappeared.

CS secondary to ectopic ACTH secretion has been described in association with a variety of tumors. The current experiences with this syndrome are based on a few case series and individual case reports.

It is difficult to confirm CS associated with ectopic ACTH-producing tumors, not only for diagnosis, but also for localization of the tumor itself. Imaging scans, such as CT or MRI of the chest and abdomen, PET, and somatostatin receptor scintigraphy are still the most effective diagnostic measures to localize the tumors (3). However, the ectopic ACTH source usually remains occult, and between 12% and 19% of the tumors may not be localized on initial evaluation (4). The main cause is that the associated tumors are not always detected in routine imaging scans. It was reported that the tumors could not be found with a CT scan or an MRI in about 20–50% of the EAS cases (2). The outcomes after lung surgery for suspected tumors were sometimes unsatisfactory, because in these cases the resected nodules were not the ectopic ACTH secreting tumors, but were the results of opportunistic infections, such as invasive pulmonary aspergillosis or bacillosis due to hypercortisolism (5,6). In our cases, four patients could not recover after lobectomy or excision of the mediastinal tumor. The pathological study showed pulmonary aspergillosis in three cases and mediastinal angiomatous hyperplasia in one case. The exact tumors could not be found in these four patients; however, surgery still remains important for localization of the tumor and therapy for the disease.

The most common type of tumor is NET, which can be classified as well-differentiated NET (such as carcinoid tumor) and poorly-differentiated NET (such as small-cell carcinoma and large-cell neuroendocrine carcinoma). Most prevalent origins of ectopic ACTH secretion are small-cell carcinoma of the lung, broncho-pulmonary carcinoid tumor, thymic NET, pancreatic NET, medullary thyroid cancer, and pheochromocytoma of the adrenal gland (2,7). NSE immunostaining can be regarded as one of the molecular marker detections for NET, while immunostaining for ACTH and CgA also provide helpful diagnosis for ectopic ACTH secretion source (8). The tumors are often found in the bronchus, lung, and mediastinum (9). In our cases, the tumors were all NETs of the chest. The most common location was in the mediastinum (84.2%, 16/19), and in the bronchus/lung (10.5%, 2/19). ACTH showed positive immunostaining in 89.5% (17/19) of the cases, while CgA was positive in 52.6% (10/19) of the cases.

However, chemotherapy failed to achieve a clinical response, and the tumor progressed rapidly with worse clinical conditions related to CS (14). Surgery is therefore the first choice to treat the disease when the ectopic tumor is localized (15). Medication, including adrenal enzyme inhibitors and glucocorticoid antagonists, is also an important way to control hypercortisolism (16). When the primary tumor cannot be found or removed and medical control fails, unilateral adrenalectomy, or bilateral adrenalectomy with subsequent steroid replacement, is an effective alternative for control of hypercortisolism (11,17).

Recurrence of the symptoms and recurring elevations of the ACTH/cortisol levels after surgery are usually associated with relapse and metastasis of the tumors. Distal metastasis of the tumor was commonly seen in some pathological types. Thymic NET and small-cell carcinoma of the lung showed high rates of relapse and distal metastasis with poor prognosis (18,19). The symptoms recurred in six cases related to mediastinal NET in our study. Two cases showed distal metastasis, including one with bone metastasis and the other with disseminated metastasis; both died later. The other four cases had relapses of the tumor. One patient died without a second surgery, while others received a second surgery, but only one survived. In these four cases, the relapsed tumors were all found in the mediastinum, but in the different position instead of their original position. This indicated that ectopic ACTH-producing tumors could exist in any position of the mediastinum, and this could be a reason for the relapse of the intra-thoracic NET.

In conclusion, the diagnosis of EAS can be challenging, because the source of ACTH production is difficult to identify. It is recommended that a CT scan or an MRI or PET-CT should be used as routine detections for patients with symptoms of CS. The intra-thoracic region should be assessed even when the tumor exists in the pituitary, because the ectopic ACTH-secreting tumor is commonly observed in the bronchus/lung and mediastinum. Despite the incidence of pulmonary nodule secondary to opportunistic infection in some cases, surgery is still the first choice if the tumor is localized. The surgical procedure should be performed according to the principles for resection of lung cancer and mediastinal tumors. The anterior mediastinum adipose tissue should be excised as much as possible during resection of the mediastinal tumor. The surgical efficacy is significant in the short-term period; however, the recurrence of the disease in the long-term is considered to mostly contribute to distal metastasis or relapse of the tumor.

The authors thank Tingwei Su, MD from the Department of Endocrine Disease, for his assistance in providing part of the data of the patients.