Primary hyperhidrosis is sweating that exceeds physiologic needs. It is typically localized to the hands, axillae, face, or feet and is caused by stressful or emotionally-charged situations. Although it is a benign disorder, primary hyperhidrosis can interfere with daily activities of living. Treatment for primary hyperhidrosis includes topical antiperspirants, botulinum toxin A, oral medication, and iontophoresis; however, these treatments are not effective and their effects are usually transient (1-3).

Thoracoscopic sympathetic surgery is regarded as a definitive treatment for palmar hyperhidrosis. It is easy to learn and practice, with short operation times, high success rates, and low morbidity (4-6). Compensatory sweating (CS) is the most uncomfortable and unwanted complication following thoracoscopic sympathetic surgery. Indeed, the high satisfaction rate (89%) immediately following hyperhidrosis surgery eventually decreases to 66% after six months, in large part due to CS (7). Various surgical strategies have been employed to achieve optimal control of palmar hyperhidrosis while simultaneously achieving a lower grade of CS, higher grade of patient satisfaction, and lower rates of recurrence/failure. However, the optimal surgical strategy for palmar hyperhidrosis remains unclear. The aim of this study was to compare clinical outcomes based on the level and type of sympathetic disconnection in patients with palmar hyperhidrosis.

From January 2009 to December 2014, 101 patients with palmar hyperhidrosis underwent thoracoscopic sympathetic surgery at Gangnam Severance Hospital. Complete follow-up information was obtained from 59 patients. The medical records of these cases were reviewed retrospectively. Data acquisition and analyses were approved by the Institutional Review Board of Gangnam Severance Hospital. The medical records contained the patient characteristics, operative procedures, and perioperative results. We interviewed the patients using a previously reported and revised telephone questionnaire (2) in June 2015. The telephone questionnaire addressed degree of palmar sweating, grade of CS, grade of satisfaction, and recurrence/failure. The degree of palmar sweating was defined as the percentage of post-operative palmar sweating compared with pre-operative palmar sweating. Grade of CS was classified as none, mild (not bothering), moderate (sometimes bothering), severe (often bothering), or very severe (intolerable). Grade of satisfaction was classified as very satisfied, satisfied, moderate, dissatisfied, or very dissatisfied. Recurrence/failure was defined as cases in which any other treatments were performed, or in which patients reported a residual 40% of palmar sweating for those who had undergone sympathetic surgery. 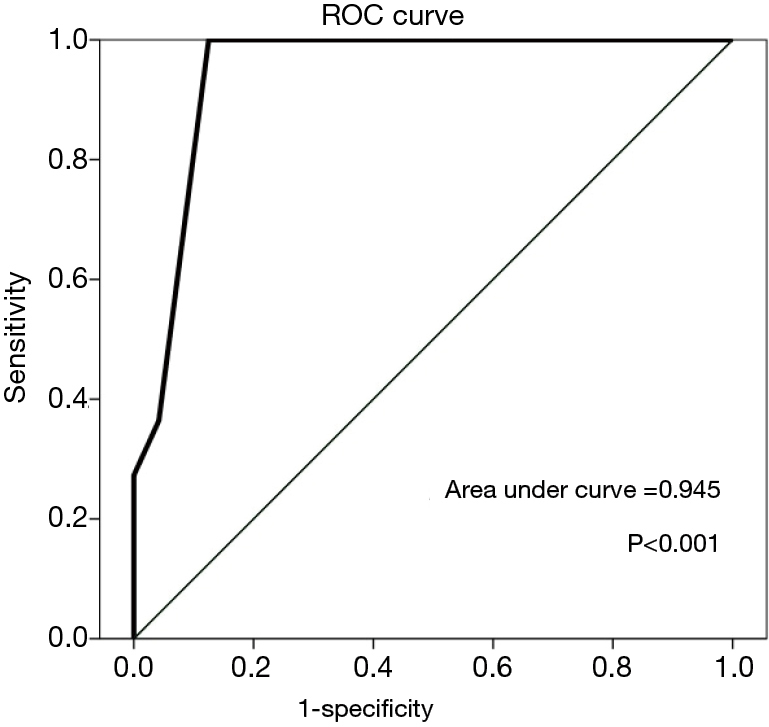 We retrospectively analyzed the results of operation, degree of palmar sweating (%), grade of CS, grade of satisfaction, and recurrence/failure rate.

Thoracoscopic sympathetic surgery was performed with the patient in the Semi-fowler’s position with both arms elevated and supported to 90° under general anesthesia using a single lumen endotracheal tube. Palmar temperature monitoring was not used. Operation techniques were selected based on the operating surgeon’s preference. In case of sympathetic clipping, one port was made for the insertion of endoscopic instruments in the anterior axillary line at the level of the third intercostal space. Another port was made in the mid-axillary line at the level of the fifth intercostal space for insertion of a 5-mm, 0° telescope (Olympus Winter & Ibe, Germany). Then, 1,500 to 1,700 mL of CO2 gas were installed into the thoracic cavity to gradually deflate the lung. The parietal pleura was opened along the main sympathetic trunk using diathermy, and the sympathetic chain was dissected with scissors avoiding diathermy to prevent any thermal injury. The sympathetic chain was clipped on the upper border of the fourth or third rib (R4 sympathetic clipping or R3 sympathetic slipping, respectively) using an endoclip (Ligaclip, Ethicon, USA). In the case of sympathicotomy, costal pleura on surfacing of the sympathetic chain were transected at the level of the fourth rib bed (R4 sympathicotomy) with diathermy. In order to amputate the potential bypass nerve fibers, we extended the transection range by approximately 2 cm laterally along the surface of the corresponding rib. A 10-Fr chest tube was placed in the pleural cavity, the lung was inflated, and the chest tube was removed once air escape ceased. We routinely conducted the operation on the right side first, in view of the imbalanced innervation of the heart by bilateral sympathetic nerves (8). The same procedure was performed on the contralateral site. A postoperative routine chest radiograph was obtained in all patients before extubation in the operating room for the detection of pneumothorax. Most of the patients were discharged the same day or the following day. The operative procedures were adopted from our previously published technique (9). 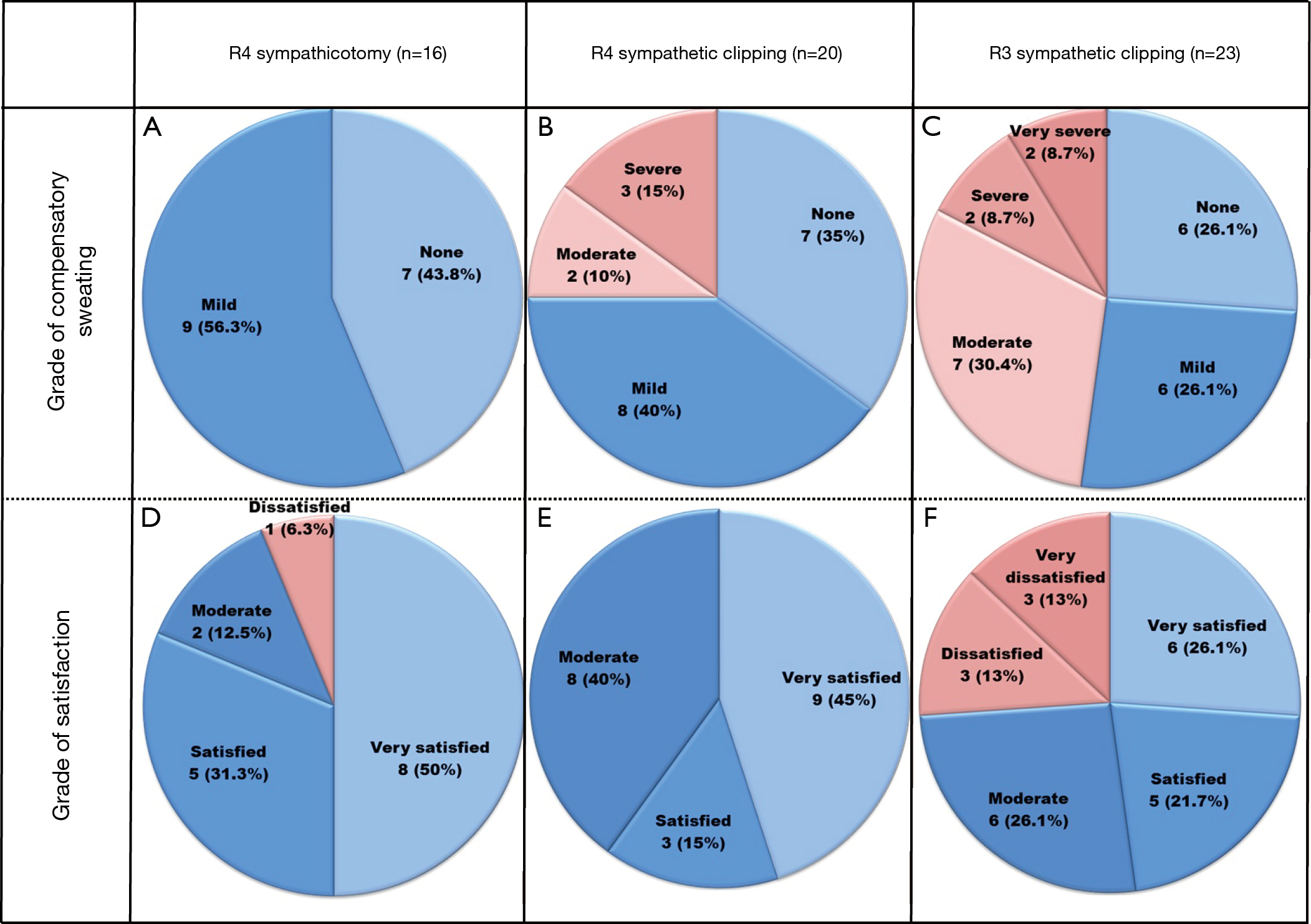 Correlation between follow-up duration and other variables

There have been some reports that the results of sympathectomy deteriorate with time (10,11). CS usually develops within the first six months after surgery (12). Not surprisingly, some have found that the recurrence rate increases with time, while satisfaction decreases with time (9). 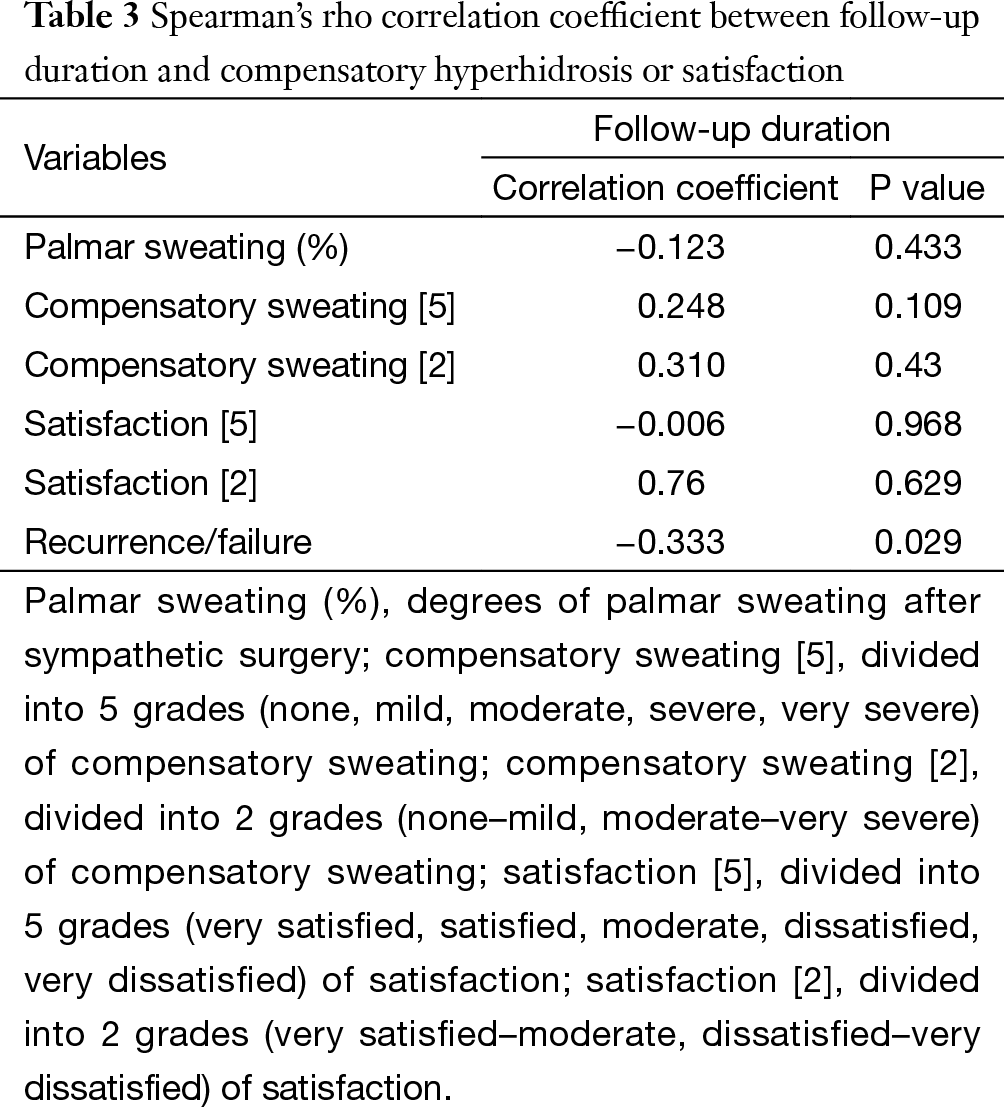 To predict the risk factors of life bothering CS, dissatisfaction, and recurrence/failure, we used logistic regression models. After analyzing with a logistic regression model, sympathetic surgery of the R3 level was the only significant risk factor of dissatisfaction (odd ratio =12.353, 95% confidence interval =1.376–110.914; P=0.025), and there were no statistically significant risk factors of CS and recurrence/failure.

Primary hyperhidrosis is sweating beyond what is expected physiologically and affects a significant proportion of the general population (5). It is caused by hyperfunctioning sudoriparous glands, which are frequently triggered by emotion (8). Although it is benign in nature, it can nevertheless be a cause of significant social, emotional, and professional disability. There is a potential role for genetic predisposition for primary hyperhidrosis, given a positive family history, in up to 25% to 50% of affected individuals (2,3,5). Non-surgical treatment with iontophoresis, botulinum toxin, injections, etc. is not permanent. Thoracoscopic sympathetic surgery is thus regarded as a definitive treatment for palmar hyperhidrosis. Indeed, thoracoscopic sympathetic surgery has lower complication rates irrespective of the method used to interrupt the sympathetic trunk; to date, however, the optimal surgical technique and level of sympathetic trunk interruption in thoracoscopic sympathetic surgery is still debated (5,13). We compared the clinical results by level and type of sympathetic disconnection in patients with palmar hyperhidrosis.

Based on our data, R4 sympathicotomy and R4 sympathetic clipping yielded better results for CS and patient satisfaction when compared to R3 sympathetic clipping. Lin et al. reported that in four of 25 cases in an R2 interruption group and three of 55 cases in an R3 interruption group had unacceptable reflex sweating (14). Liu et al. reported that the incidence of CS is lower in patients undergoing R4 interruption than in patients undergoing R3 interruption (56.5% vs. 77.4%) (8). However, clipping of the sympathetic trunk did not decrease the incidence of CS when compared with traditional methods of sympathicotomy (9,14).

It is an attractive and intuitively sound idea that clip removal has a potential to reverse adverse effects after CS. Some have argued that clipping cannot be considered to be a reversible technique (15,16), while others have suggested that clips should be removed between the first ten days and the first month after sympathetic clipping to ensure recovery of the sympathetic nerves (6,17). We assume that clipping removal was not done in time for reversal; therefore, we also believe clipping removal is not a reversible technique.

In this study, recurrence/failure rates were lower in the R4 sympathicotomy group than in the other two groups (12.50% vs. 35.00%, 34.8%; P=0.25). The recurrence rate can increase over time (12). Weksler et al. reported recurrence rates of 0.4% in the first year, 0.6% in the second year, and 1.1% in the third year (18). Similarly, Lin et al. and Walles et al. found that the results of sympathectomy deteriorate with time (10,11). Lee et al. suggest that the recurrent postoperative sweating may be due to local nerve regeneration, but this hypothesis has not yet been proven (19). Yazbek et al. suggest that patients have follow-up appointments or surveys at 1 month, 6 months, 1 year, and yearly thereafter for at least 5 years if possible to detect any possible recurrence (20).

CS is a significant complication that causes many patients to regret having sympathetic surgery. However, there are no electrophysiologic studies to support these concepts. The common explanation for CS is a thermoregulatory mechanism. Sweat glands attempt to compensate for the decreased amount of secretory tissue. Some studies have found that few or none of the fibers from T2 or T3 innervate the hands, whereas fibers from T4 to the skin of the palm definitely pass through T2 and T3 (8). Fibers directed to the palm can be transected at T4 without interrupting the sympathetic tone to the human brain. R4 sympathicotomy, even though it should theoretically result in the smallest amount of denervation of the hands, relieves the over-sweating condition of the hands; further, in the present study, it had the highest rate of ‘very satisfied’ responses from patients. The goal of the treatment of palmar hyperhidrosis is to increase the quality of life of the patients rather than to fully eliminate the sweating function of their hands. For palmar hyperhidrosis, there is a slightly higher risk of CS with an R3 interruption but a risk of moister hands with an R4 interruption. Patients feel more comfortable when a certain minimal moistness is maintained and complete exsiccation is avoidable (8,17,21). Choi et al. found that a certain amount of moisture in the palms makes hand movements easier, and suggested that the ideal result of surgery for palmar hyperhidrosis is to avoid excessive sweating or dryness and maintain a slight level of moisture in the hand (22).

Sympathicotomy that transects the inter-ganglion fibers but does not resect the ganglions is the most popular method worldwide (8). This “R4 only” method is reported to result in high success rates, minimal CS, and less over-dryness of the hands (13,18,21).

Our study has several limitations. First, it is difficult to objectively measure the outcome of sympathetic surgery, as many centers have different methods to evaluate these results. Second, we did not follow the patients regularly. The degree of palmar sweating and grade of CS may change over time. Through regular follow-up, these changes might be detected. Third, our study was limited to a small group of patients. Finally, it was a retrospective study and was not randomized. To further validate our results, future prospective analyses of a larger group of patients are needed in a regular follow-up study.