The Masaoka staging system, published in 1981, staged tumors on the basis of their anatomical extent (4). In 1994, Koga et al. suggested a modification of this system (5). The ITMIG opted to use the Masaoka-Koga system until a scientifically validated system is defined and remains the most widely used system currently (6,7). The WHO’s histologic typing system of tumors of the thymus, published in 1999, classifies TETs as type A, AB, B1, B2, B3, or C on the basis of the morphology of their epithelial cells and the ratio of lymphocytes to epithelial cells. The WHO classification system has been widely adopted because it enables simple comparisons of clinicopathological studies (8).

It has previously been suggested that the Masaoka stage and the WHO histological subtype may be independent factors for the prognosis of TETs (4,8-16), however, the potential advantages of using a combination of these two classification systems is still unclear. Therefore, the aims of this study were to evaluate prognostic factors after complete resection for TETs and to stratify the risk of recurrence after R0-resection based on the Masaoka-Koga stage and WHO classification systems.

A retrospective analysis of 479 patients who underwent surgical resection for TETs at Asan Medical Center between Jan 1994 and Feb 2014 was conducted. Patients with tumors that could not be classified according to the WHO system, those with thymic neuroendocrine carcinomas and those who underwent biopsy alone were excluded from this study. This study was approved by our institutional Ethics Committee/Review Board, which waived the requirement for informed patient consent because of the retrospective nature of this study.

The mainstay of treatment of TETs was surgery. The surgical procedures included tumor excision (including the partial thymus), total thymectomy, and extended thymectomy, which were achieved via transsternal thoracic surgery, video-assisted thoracic surgery (VATS), or robotic surgery. For each approach, the basic principles of total thymectomy included en bloc resection of the gland (including the cervical poles and adjacent mediastinal fat), protection of the phrenic nerves, and prevention of intrapleural dissemination whenever possible. For patients with myasthenia gravis (MG), extended thymectomy under a full median sternotomy was most commonly performed. Systematic mediastinal lymph node dissection was not routinely performed at our institution, although lymph node dissection was performed in cases of metastasis on preoperative evaluations. Of the 479 patients enrolled, 187 (39.0%) patients underwent lymph node sampling or dissection during surgery.

Preoperative and postoperative treatments and surveillance

Determination of the efficacy of thymic epithelial tumors (TETs) treatment

The efficacy of treatment of TETs was determined by measuring the rates of postoperative survival and tumor recurrence. Overall survival is easy to measure and is hence the most commonly used end point; however, it is not an ideal metric because many patients with thymoma die of unrelated causes and patients can survive for many years with recurrent disease (18). The ITMIG proposed that the rate of recurrence of tumors is the most appropriate measure of the efficacy of treatment of thymic malignancies (19). Here, the overall survival (OS) rate was used in all patients and the freedom-from-recurrence (FFR) rate was used as a measure of successful complete resection, and the definition of recurrence after R0-resection was based on the ITMIG proposed criteria (19).

Categorical variables were compared using Chi-squared or Fisher’s exact tests. Continuous variables are expressed as the median ± range. Kaplan-Meier curves were used to delineate the overall survival rate, the FFR rate, and the progression-free-rate. Log-rank tests were used to compare the between-group differences in these rates. For multivariable analyses, Cox-proportional hazards models were used to determine the risk factors for recurrence or death. Variables with P≤0.10 in univariate analyses were candidates for the multivariable Cox models. Multivariable analyses involved a backward elimination technique. All statistical analyses were performed using SPSS version 18.0 software (SPSS Inc., Chicago, Ill, USA). P value less than 0.05 was considered statistically significant.

Overall survival analysis in all patients 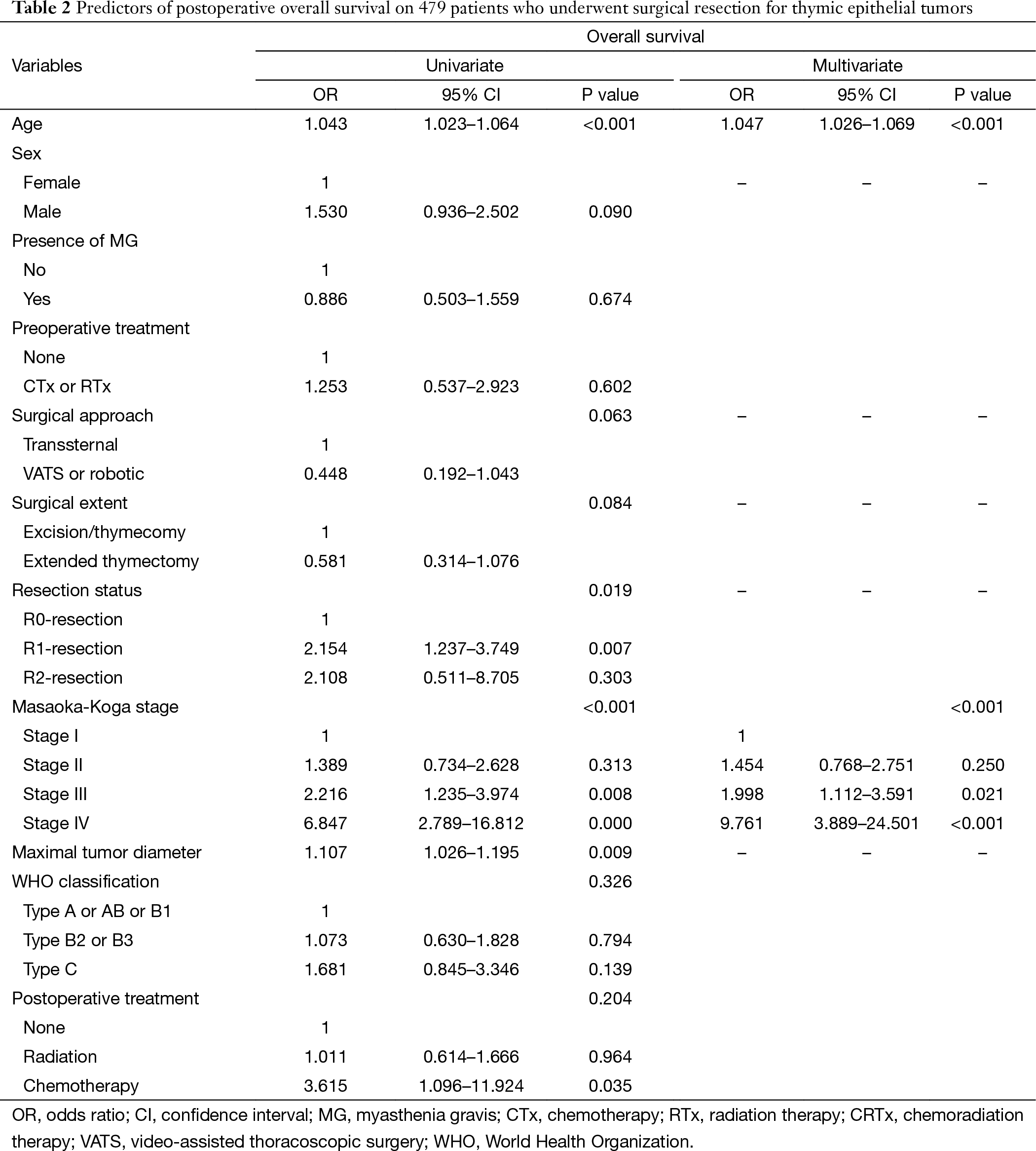 Figure 1 Freedom-from-recurrence curves of patients stratified by the Masaoka-Koga stage (A) and by the WHO histological classification (B). 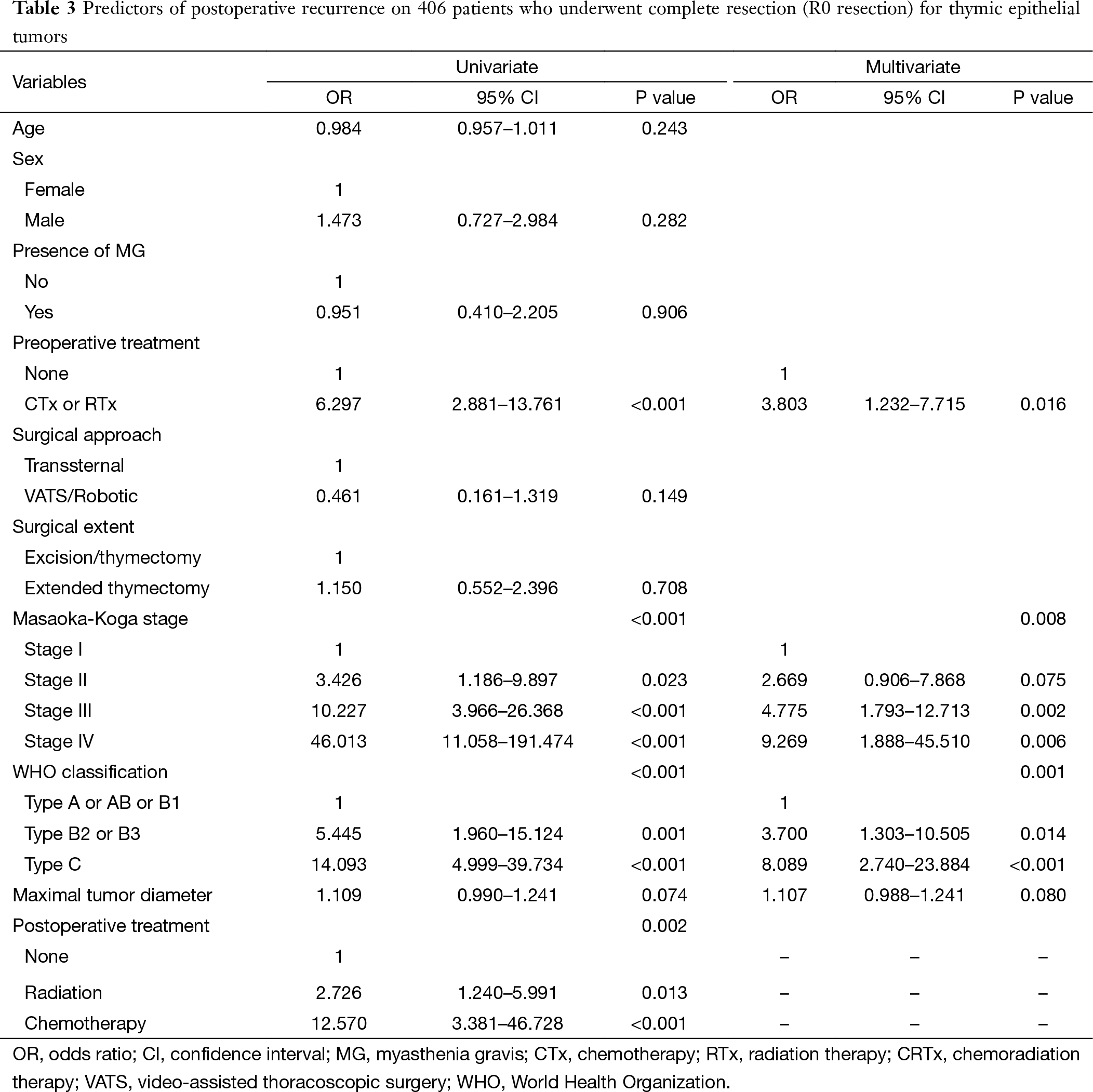 A cross-comparison of the WHO classifications and Masaoka-Koga stages of the 406 patients who underwent complete resection for TETs is shown in Figure 2A. A multivariate analysis of prognostic factors for recurrence subdivided the 406 patients into 12 subpopulations based on the basis of combinations of Masaoka-Koga stage and WHO histological classifications (the subtypes were grouped into three categories; type A or AB or B1, type B2 or B3, and type C).

The 5-year FFR rates were 99.4% for group 1, 84.7% for group 2, 63.7% for group 3, and less than 44.4% for group 4 (P<0.001, Figure 2C). In a multivariate regression adjusting for preoperative treatments and maximal tumor size, risk groups were significant factors predicting recurrence after R0-resection (data not shown).

The tumor-nodes-metastasis (TNM) classification system has been used to stage malignant tumors of multiple organs; however, there is currently no authorized TNM system for TETs, although IASLC/ITMIG is currently proposed evidence-based TNM-based stage classification system of TETs for 8th edition of the stage classification manuals (20). We fully recognize that it is necessary to apply and to validate a newly proposed system, however, it is difficult to apply this system to our clinicopathologic data, because of the lack of detailed data for lymph node status. Therefore, we decided to stratify the prognosis of TETs based on the currently using systems including Masaoka-Koga stage and WHO classifications of TETs.

Masaoka-Koga stage and WHO histological classification are important variables for disease recurrence after R0-resection. In this study, Kaplan-Meier curves demonstrated a clear distinction between the recurrence rates after complete resection in Masaoka-Koga stage I and stage II patients, which supports Masaoka’s original opinion that these patients should be individually grouped (21). However, in accordance with previous studies (10,11,22-24), the multivariate analysis did not identify any significant prognostic differences between stage I and II patients. Controversies regarding proposals to combine stages I and II will need to be resolved by additional large cohort studies with long-term follow-up periods.

Consistent with recent reports (10,11,22,24), the WHO histological classification was also a prognostic factor for TET recurrence in this study. Although the official WHO classification subdivides TETs into three major categories (A, B, and C), the Kaplan-Meier curves presented here enabled division of these tumors into different three categories on the basis of their recurrence rate: type A or AB or B1, type B2 or B3, and thymic carcinomas. Regarding type B1 thymoma, among the 104 patients proved type B1 thymoma after complete resection in this study, only 4 patients (3.8%) experiences recurrence after R0-resection; One of these 4 patient underwent extended thymectomy at the age of 61 for type B1 thymoma with regional lymph node metastasis (four of nine lymph nodes) and received adjuvant radiation therapy. Recurrent pleural seeding (regional recurrence) was identified in the left pleural cavity 40 months after the initial operation and chemotherapy was administered. The patient died 93 months after surgical resection (at the age of 69) due to pneumonia. Consequently, it seems that B1 thymomas follow a favorable clinical course; even at stage IV they may not be fatal due to the very slow progression of the disease. These results are consistent with those of previous study, which reported that WHO type A and AB thymomas are considered benign and type B1 thymomas have a very low malignant potential, although local recurrence or late metastasis may occur rarely (25). On the contrary, type B2 or type B3 thymomas had a greater degree of malignancy, which is consistent with a previous report that showed a clear association between malignancy and type B2 or B3 thymomas and thymic carcinomas (26).

This study has important limitations stemming from its limited number of events (such as death or recurrence) and a retrospective analysis of observational data from a single institution. The major shortcoming of the study is the approaches to reclassify the patients required the use of somewhat biased and potentially inappropriate statistical methods and the lack of a confirmatory subgroup of patients. Our results should be considered preliminary until confirmed in an independent validation cohort. Nevertheless, we have reported the retrospective outcomes of our cohort, because the risk grouping method based on a combination of the Masaoka-Koga and WHO classification systems takes into account the tumor extent and histology after complete resection of TETs and may aid the formulation of hypotheses required to develop future studies.

The authors thank Hwa Jung Kim, MD, from the Department of Biostatistics for statistical analysis.