Where do we go from here? Reappraising the data on anticoagulation in pulmonary arterial hypertension

The utility of anticoagulation in pulmonary arterial hypertension (PAH) has long been a source of debate between experts in the field (1,2). There is strong pathophysiologic rationale for this type of therapy, as numerous studies have identified in situ thrombosis and a pro-coagulant milieu in PAH (3-9). Unfortunately, a paucity of randomized controlled studies has left practicing clinicians relying on a handful of observational investigations to guide practice patterns (1,2,10,11). Prior to publication of the Registry to Evaluate Early and Long-term PAH Disease Management (REVEAL) registry anticoagulation report, there were 9 cohort studies [2 prospective (12,13) and 7 retrospective (6,14-19)] specifically addressing the question of anticoagulation in PAH. Overall, the data favored anticoagulation, with a 31% reduction in mortality described in a meta-analysis and systematic review—although with concern for publication bias (10,20). In line with this finding, international guidelines continue to recommend use of anticoagulation in idiopathic pulmonary artery hypertension (iPAH) but recognize the scarcity of supportive trials (9,21,22). Guidance for anticoagulation in connective tissue disease-associated PAH (CTD-PAH) remains even more elusive (14). Only 2 (13,14) of 9 studies included in the meta-analysis by Caldeira and colleagues (10) explicitly address CTD-PAH and they demonstrate incongruous findings.

The 2015 Circulation publication describing analysis of anticoagulation in the REVEAL registry increases the clinical uncertainty surrounding this question (23). This United States based-retrospective registry assessed the effect of warfarin treatment on survival in patients with iPAH and systemic sclerosis-associated PAH (SSc-PAH). iPAH and SSc-PAH patients who started warfarin after enrollment into the registry were matched with patients never on warfarin based on enrollment center, etiology and diagnosis status. In the iPAH cohort, there was no significant survival benefit observed in the unadjusted or REVEAL risk score (24) -adjusted analyses. The SSc-PAH warfarin cohort had increased mortality with an unadjusted hazard ratio of 2.03 (P=0.03), decreased to an insignificant 1.6 when adjusted for the risk score. An adjusted time-varying cox proportional model was performed on the unmatched sample to account for frequent warfarin starts and stops. The iPAH warfarin cohort still had no significant survival benefit, but interestingly the hazard ratio dropped below 1. The SSc-PAH group maintained a similar trend toward increased mortality in warfarin users.

The stir generated by this publication is amplified in the setting of a similar registry study, the Comparative, Prospective Registry of Newly Initiated Therapies for Pulmonary Hypertension (COMPERA) registry, published almost two years earlier with discordant results (14). COMPERA also examined anticoagulation in PAH, with analysis of both iPAH and SSc-PAH cohorts, in a mostly German population. Similar to REVEAL, COMPERA found no mortality benefit with a trend toward decreased survival in the SSc-PAH group treated with anticoagulation. On the other hand, both matched and unmatched survival analyses demonstrated a statistically significant mortality benefit in iPAH anticoagulation users. In the matched analysis, the survival difference was 4%, 11% and 12% at 1, 2, and 3 years follow-up, respectively (P=0.017).

The results of the COMPERA analysis overall align with the previously published studies (10)—so what is different about these seemingly similar registries that may account for the novel findings in regards to iPAH and anticoagulation in REVEAL? Focusing on iPAH, both studies enrolled a similar number of patients and the matched-pair analyses were comparable in size (REVEAL: 144 pairs, COMPERA: 183 pairs). The mean age of patients in the iPAH cohorts is quite different: those in the COMPERA registry are approximately 20 years older than the comparison REVEAL group (72 vs. ~50 years of age). COMPERA had 56% female participants, compared to 80% in REVEAL. The COMPERA iPAH patients also appear sicker, with a lower baseline 6-minute walk distance (6MWD) and worse World Health Organization (WHO) functional class: 96% of patients with class III/IV vs. only ~55% in the REVEAL iPAH cohort. Comorbidities were comparable between iPAH patients on warfarin compared to those not on warfarin in the REVEAL study, but have not been reported from COMPERA, limiting direct evaluation (14,25). One possible explanation is that the older, more morbid and male iPAH participants in the COMPERA study represent a changing demographic admixed with the more stereotypical iPAH patients described in prior studies and the REVEAL registry population (26). There is great potential that this differing demographic has unidentified comorbidities, such as arrhythmias, that could explain the mortality benefit with anticoagulation seen in COMPERA and not REVEAL (27,28). Arguing against this hypothesis, however, is the fact that the REVEAL registry population is actually more similar to the previously published studies that did find survival benefit with anticoagulation (10).

There are also noteworthy differences in the PAH-targeted therapies employed in the two registries, reflecting variance in clinical practice patterns between US and European experts (29). In the REVEAL iPAH cohort, 58% of patients on warfarin and 32% not on warfarin received a prostacyclin analogue (intravenous, subcutaneous, inhaled or oral). This contrasts with the medications reported in COMPERA, where far fewer patients were reported to be on prostacyclin analogues. Prostacyclin therapy not only provides vasodilation in PAH, but has also been shown to alter hemostatic and platelet pathways, possible decreasing the in situ thrombosis and hypercoagulability observed in patients with PAH (3,7,30-32). Of note, bleeding risks are increased in patients with iPAH, CTD-PAH and chronic thromboembolic pulmonary hypertension when vitamin K antagonists (VKA) were used in conjunction with prostacyclin (33). Considering these data, increased use of prostacyclin in the REVEAL registry potentially provides enough anticoagulation or anti-platelet activity to mitigate any possible observed benefit of VKA therapy. Moreover, although the occurrence of fatal bleeding complications was similar in COMPERA and REVEAL, neither study was designed to capture all bleeding events. Increased bleeding risk in REVEAL (as a result of increased concurrent prostacyclin and VKA use) could theoretically increase morbidity and mortality, decreasing observed benefit of anticoagulation use in iPAH.

Even more interesting is the disparity between warfarin use patterns in the two registries; a point which more than any raises concern of comparability. The more recently published REVEAL registry reported a mean time on warfarin of 11.8 months, with 3, 9 and 16.5 months for the 25th, 50th and 75th percentiles, respectively. The mean INR was reported at 1.9 in the iPAH participants. While COMPERA does not provide mean INR measurements, limiting our ability to assess quality of anticoagulation, the duration of use is notably longer. Fifty-six percent of patients used warfarin for the entire 36-month follow-up period, with 85% anti-coagulated for >50% of the time (>18 months). These results raise the possibility that in iPAH there is a critical duration of anticoagulation that provides benefit—the majority of patients in REVEAL may not have reached this crucial threshold and therefore have no improvement in survival. Although REVEAL included a time-interval time-varying covariate model, this statistical strategy only addressed ever versus recent use, not cumulative duration.

The concern of immortal time bias (ITB) was raised in both the COMPERA and REVEAL manuscripts and a contemporary review in Circulation (2,14,23). Fundamentally, the concept of ITB implies that patients included in the warfarin group must survive long enough to start therapy, potentially biasing towards increased survival in the warfarin cohort; that is to say, that patients included in the no warfarin cohort may die from another cause prior to having a chance to start warfarin therapy (2,34). Study design in the REVEAL registry decreases the probability of ITB compared to COMPERA and may explain the lack of mortality benefit, but the degree to which this bias alters the results is uncertain.

So where do we go from here? There are still only 10 studies specifically addressing anticoagulation in PAH and the data therein remains of questionable utility. The two most influential publications attempting to answer this question have conflicting results and debatably should not be compared in light of differing demographics. Moreover, a minor and decreasing proportion of randomized trials (Figure 1) and registries (Table 1) report the use of warfarin or other types of anticoagulation. COMPERA and REVEAL are the only 2 modern registries reporting anticoagulation use to provide direct analysis of morbidity and mortality related to this controversial therapeutic strategy. Almost more striking is the decline in reporting from randomized trials (Figure 1). In the first two decades of major PAH investigation, 50% reported the use of anticoagulation and the pooled percent of patients taking anticoagulants ranged from 47–100%. Since 2010, only approximately 30% of studies disclose anticoagulation, and use ranges from 31–79%. Whether this reduction in reporting reflects decreased anticoagulation use in practice or simply waning interest remains to be seen. 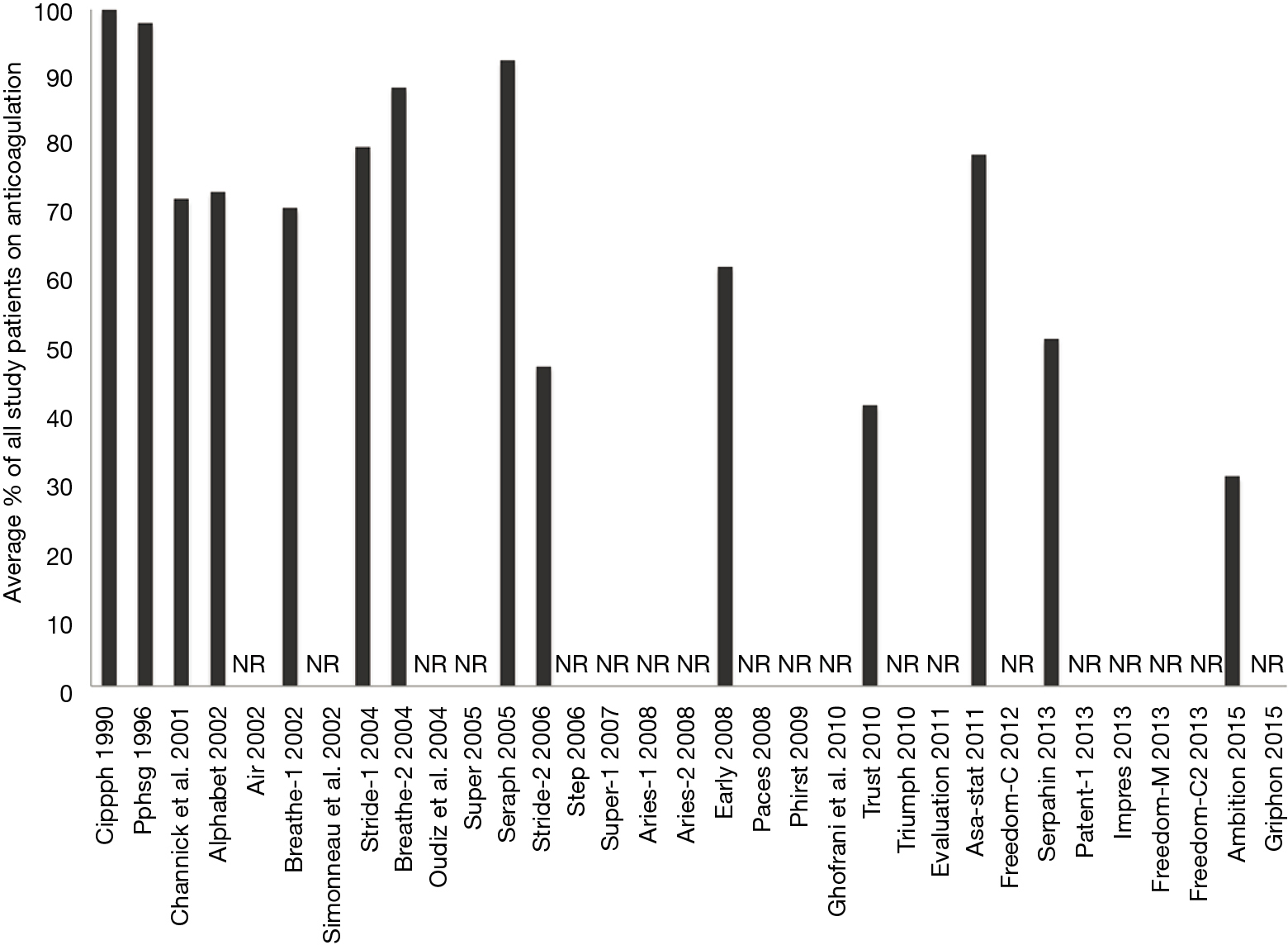 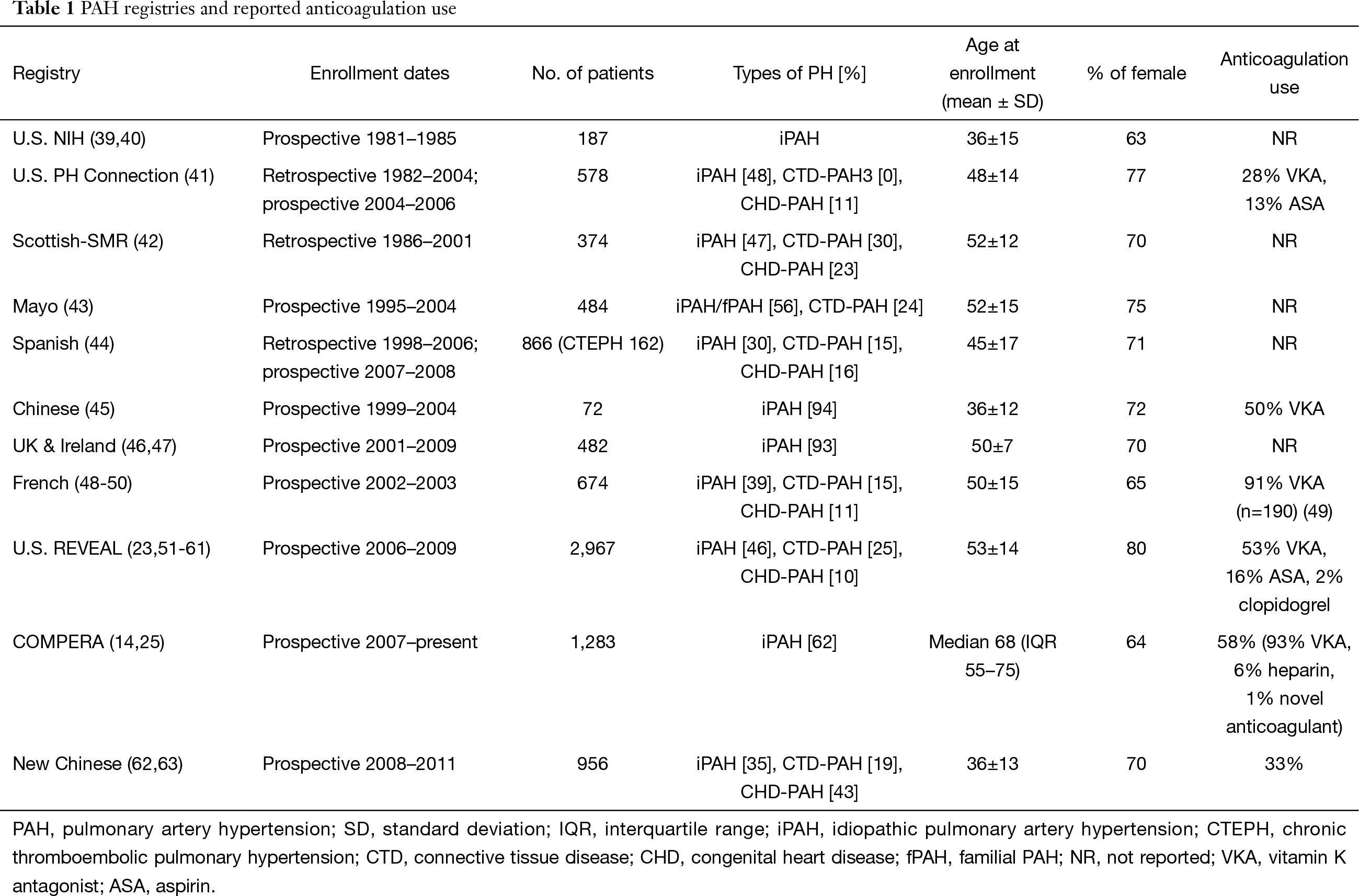 More robust data in the form of a well planned, international randomized controlled study would provide great insight into this topic (2). Alternatively, this area of clinical uncertainty would be well suited for a randomized registry study (64), an attractive, economic avenue that has not been successfully employed in PAH as of yet (65). While not without consequences (9,33), anticoagulation retains a place in treatment algorithms, prompting urgent reconciliation of this therapeutic dilemma in PAH.

Provenance: This is an invited Perspective commissioned by the Section Editor Yue Liu (Department of Cardiology, the First Affiliated Hospital of Harbin Medical University, Harbin, China).