Statins for delirium in ICU patients: a negative trial but a positive step

The hypothesis that statins could prevent delirium in critical care was founded on research suggesting neuro-inflammation born out of oxidative change and apoptosis contributed to delirium pathophysiology (2). The therapeutic intervention, statins, had been shown previously to mediate an anti-inflammatory response through neurotransmitter and endothelial manipulation (3). The well-founded scientific hypothesis was evaluated in a gold standard randomized control trial (1). This research process, usual in the investigation of other conditions, is a significant advance for delirium research.

Delirium research has been slow comparative to other neurological disorders. In part, this has been related to issues in diagnosis, classification and sub-classification, combined with a lack of research tools to investigate the underlying pathophysiology of delirium (4). The syndrome’s deleterious effect on the individual in the short and long term has only relatively recently been clarified (5). In order to advance knowledge of a condition, agreed definitions, diagnostic tools, biomarkers and measures of severity that can be replicated across distinct cultural, language and medical scenarios must be developed. Progress on these tasks has been rapid in the last decade with international consensus on these topics strengthened by the formation of the European Delirium Association (6), the American Delirium Society (7) and the Australasian Delirium Association (8). These professional associations and their respective annual scientific meetings, including the formation of a Core Outcome Measures in Effectiveness Trials group (9), now form the platform for ongoing delirium research.

Delirium research has been slowed by a paucity of insight into the fundamental pathophysiology of the condition (4). Translation of the poorly defined syndrome with neuropsychological constructs as the core features into animal models has been difficult. Recently progress has been made with the development of delirium mouse models. As described by Griffin et al., mice are challenged by an acute stressor such as bacterial endotoxin Lipopolysaccharide (10) that then induce temporary changes in cognitive tasks (10). Furthermore, long-term effects are demonstrable at the functional, tissue and molecular level. This “two-hit” model reflects the human situation in critical care, where susceptible individuals subjected to a systemic inflammatory insult suffer short and long-term cognitive changes (5). Debate continues, as to whether delirium as a single process or distinct subtypes varying on cause or phenomenology. Further investigating this is hampered by the lack of biomarkers that might distinguish the subtypes from each other. Building on pathophysiology and therapeutics, some animal models have derived other potential targets for intervention. Products of Cyclooxygenase-1 have been demonstrated to mediate susceptibility to acute cognitive deficits in a ME7 mouse model reported by Griffin et al. (10). In this prion mouse model, with inflammatory overlay produced by LPS, the therapeutic intervention of a COX-1 inhibitor was effective in mitigating the deficits. Further mouse models have further elucidated some of the pathophysiological considerations in delirium and possible therapeutic options.

The SAILS cognitive subtrial demonstrates progress in delirium research. In humans, past observational studies with varying methodology revealed heterogeneous results (Table 1). Currently there are seven studies in the literature that report upon the use of statins in the context of delirium. Only two randomized control trials are currently reported (1,11) with no published results to date in the study by Casarin et al. (11). This study plans to enroll 142 patients admitted to a single institute Intensive care unit (11) for mechanical ventilation. Patients will then be randomized to receive simvastatin and evaluated for delirium subsequently. The largest registry study by Redelmeier et al., reported upon 284,158 patients (12). This study was a retrospective cohort analysis of the Canadian Institute for Health Information database. Reporting 3195 diagnoses of delirium, the study found that the use of statins in the post-operative period was associated with increased risk of delirium in those patients >65 years of age. As delirium is known to be frequently undiagnosed and poorly coded other factors may have impacted this result (13). The remaining prospective cohort studies were smaller in patient numbers, failed to show concordant results. Two single institute cohort studies showed a reduced risk of delirium in those patients admitted to ICU after cardiac surgery (14,15). Furthermore, in a multi-centre prospective cohort study, Morandi et al. (16) demonstrated a reduction in delirium associated with statin, however only if the patient exhibited sepsis early in their ICU course. 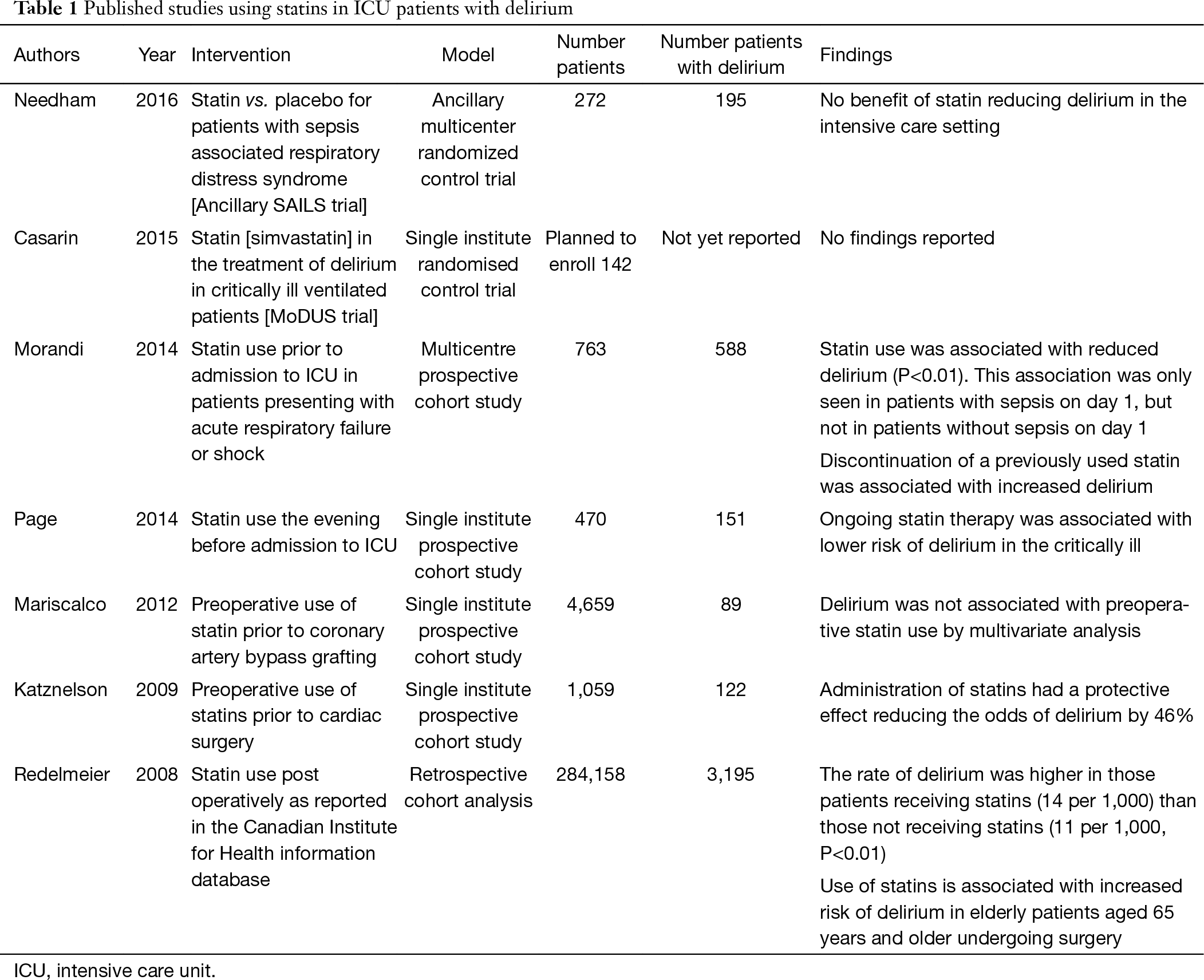 Needham et al. have shown that rosuvastatin did not improve delirium or long-term cognitive outcomes in sepsis associated acute respiratory distress syndrome (ARDS). However, the etiology of delirium spans well beyond the spectrum of sepsis. It is plausible and debated that delirium reflected in different disease settings may be underpinned by alternate pathophysiology and hence should be targeted by different therapeutics. The planned trial by Casarin et al. (11) will add valuable information by testing in a different patient cohort requiring mechanical ventilation but not necessarily sepsis or ARDS whether the anti-inflammatory effect of statins demonstrates benefit.

Strengths of the SAILS trial include the rigorous assessment of outcomes that should add to the development of a core outcome set in the management of ICU delirium and enable comparison and systematic analysis of other hypotheses. The successful completion of these outcomes would be informative to the COMET initiative for delirium, in and out of the ICU setting, representing a major step towards successful delirium treatment.

To date, the pharmacological interventions for delirium in any given clinical scenario have been disappointing. This morbid, distressing and life-threatening condition, resulting in long-term cognitive change has no effective treatment. Preventive multicomponent, non-pharmacological interventions to prevent delirium have been more successful (17). In order to identify a possible therapeutic, future studies should be directed at translating insights from fundamental in vitro and in vivo in animal models to humans and expanded to include other settings outside of the ICU.