Bruton’s agammaglobulinemia in an adult male due to a novel mutation: a case report

X-linked agammaglobulinemia (XLA), also known as Bruton’s disease, is a primary immunodeficiency disorder caused by the deficiency of Bruton’s tyrosine kinase (BTK) (1). BTK is critical in the maturation of pre-B cells to mature B cells (2,3). Patients with XLA have significantly reduced levels of mature B lymphocytes (<1% of normal) in their peripheral blood (4). According to the BTK gene mutation database (http://bioinf.uta.fi/BTKbase/), missense mutations underlie most alterations. Once the passively transferred protective maternal IgG immunoglobulins fade, these patients become susceptible to recurrent infections, and more than 50% patients have had serious infections by 2 years of life (5-7). The incidence of XLA is estimated to be 1 in 379,000 live births in USA (8). Robust data regarding its prevalence in China is lacking. In this report, we present a case of XLA caused by a novel missense mutation (c.383T>C).

A 22-year-old man presented at our hospital with a history of recurrent respiratory tract infections since the age of five years. At the age of eight years, he developed pyogenic conjunctivitis which led to loss of vision in the left eye. He had normal intelligence and was able to independently carry out his routine daily activities.

About two years ago, he developed respiratory tract infection during his stay in Kunming, a city located at an altitude of 2,000 meters, for which he required frequent hospitalization. His symptoms improved on antibiotic treatment, but he had to receive long-term domiciliary oxygen therapy. In Kunming 2 years back, the PaCO2 on admission to the hospital averaged 88.6 mmHg, and on discharge averaged 74 mmHg.

One week prior to presenting to our hospital, the patient developed exacerbation of symptoms, and upon admission, he developed obnubilation, for which non-invasive ventilator was initially applied. Subsequently, oral tracheal intubation and invasive mechanically ventilation were administered.

The patient underwent an extensive diagnostic workup, and the results of microbiology tests are summarized in Table 1, and those of cellular and humoral immunity in Table 2. There was no evidence of autoimmune disease. Tumor-related parameters were negative. Patients with both FACS analysis, Western blotting analysis, analysis of memory B cells were negative, T cells and NK cell activity in compensatory increase. 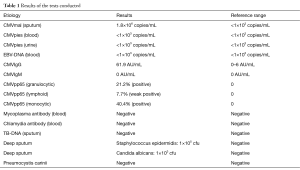 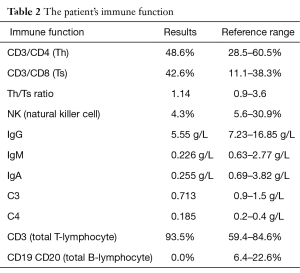 Sputum specimens were obtained at the time of endotracheal intubation and various pathogenic bacteria, especially intracellular Gram-positive cocci were isolated. The patient was administered intravenous teicoplanin, voriconazole and ganciclovir. The serum levels of IgG were below normal, and intravenous gamma globulin (10 g/day) was administered. The mechanical ventilation was successfully retracted after 14 days, and he was discharged after a total hospital stay of 28 days. The partial pressure of arterial carbon dioxide at discharge was 55 mmHg, which was significantly lower than average value of 74 recorded over several time points over the past two years.

The patient had a history of recurrent pulmonary infections since childhood, and developed full blown respiratory failure, likely as a result of repeated pulmonary infections in the past two years. He had a B (CD19+, CD20+) lymphocyte count of nearly 0% and low levels of IgG, IgM and IgA. Since his maternal uncle had died at a young age, a genetic basis was suspected, and the patient was tested for BTK gene mutation after obtaining consent of his family, and appropriate counselling. The specimens obtained were sent to the Guangzhou KingMed Diagnostics for direct sequencing of exonic coding region of the BTK gene. A hemizygous BTK mutation at (c.383T>C) was detected by comparing with the reference sequence (NM_000061.2 and NG_009616.1). This point mutation was a missense mutation [p.(Leu128Pro)] at amino acid residue 128 in the translating protein, that caused leucine to be substituted by proline (Figure 2). This point mutation was located at the conserved region of the BTK gene, and the bioinformatics analysis software LTR and PolyPhen-2 suggested that this alteration was likely to engender high pathogenicity, while the analysis of the protein structure suggested that the substitution of leucine at amino acid 128 by proline would affect the structure of zinc fingers and functional tetramers (Figure 3), thus leading to serious dysfunction. 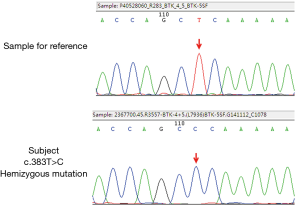 The patient was diagnosed with Bruton’s disease in accordance with the diagnostic criteria of the Pan-American Group for Immuno-Deficiency (PAGID) and the European Society of Immunodeficiency Disease (ESID) (9). The same hemizygous BTK mutation was also detected in his mother; but not in his second and third aunts (Figure 4).

Figure 4 Peripheral blood FACS analysis of the patient compared to that of a normal adult. The upper panel represents the BTK-mutant patient. The B cell group is <1% (<10% of that in the normal adult). FACS, fluorescent-activated cell sorting; BTK, Bruton’s tyrosine kinase.

Patients with XLA are particularly susceptible to respiratory infections (12,13). In our patient, Lower respiratory tract secretion specimens were obtained on bronchoscopy at the time of endotracheal intubation for respiratory failure. On culture, several pathogenic specimens were isolated such as Staphylococcus epidermidis, Candida albicans and CMV virus. In his previous hospitalizations, Lower respiratory tract secretion specimens were not obtained, and no pathogenic bacteria were isolated on routine sputum culture. BTK mutations lead to impaired humoral immunity, thus rendering the patient susceptible to Streptococci, Neisseria, Enterovirus and other pathogens (14-16). In XLA patients with long-standing impairment of immunity, the possibility of occult opportunistic infections should be considered despite negative sputum culture. 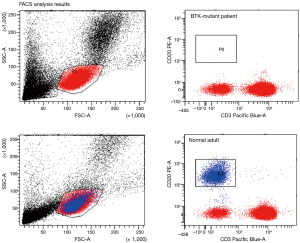 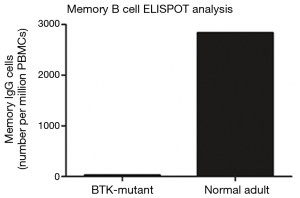 Figure 7 Simulation of the spatial structure of point mutation.

The human body relies mainly on cellular immunity to protect against CMV (17). CMV is known to evade the immune system through a variety of mechanisms. There was still a risk of acute exacerbation of chronic bronchial CMV infection although the cellular immune function was normal or even increased (18-21).

The fact that the patient has grown into manhood is closely related to his long-term use of IgG replacement therapy on a regular basis. In this case, the level of serum IgG was nearly normal, while the level of IgM and IgA was around 10% of normal. Thus, whether IgM-rich immunoglobulin should be used in the acute stage of infection is a matter of conjecture, and no evidence-based guidelines exist (22-24). This also highlights that the human body is an organized whole, and weakness of one defense mechanism (such as humoral immunity) triggers compensatory increase in other mechanisms (such as cellular immunity, antigen presentation, and NK cells).

From the clinical point of view, physicians should not only consider suppurative bacterial infection, but also opportunistic infection, such as fungi and CMV, and also institute a plan for dynamic monitoring of chronic persistent infection, and make appropriate adjustments to the therapeutic regimen on an ongoing basis.

In conclusion, genetic analysis confirmed the diagnosis of our patient, and identified a previously unreported mutation. In adult patients with repeated episodes of infection, clinicians should consider the possibility of XLA.

This project is supported by the funding from State Key of Respiratory Disease.