Esophageal squamous cell carcinoma (ESCC), which is most common in Asia, Southern and Eastern Africa, is one of the predominant histological types of esophageal cancer (1,2). Though the advances in multidisciplinary therapeutic strategies have improved the prognosis of ESCC, overall outcome is still dismal and novel approaches of treatment are needed.

Programmed cell death ligand 1 (PD-L1) and its receptor, programmed cell death 1 (PD-1), are key immune checkpoint proteins and play crucial roles in tumor immune escape (3). PD-L1 expressed on cancer cells can inhibit T-cell activation, maintain the exhaustion of T cell, impairing cytokine production, and induce the apoptosis of effector T cells which eventually result in the growth of tumor (4,5). The overexpression of PD-L1 was reported to be associated with poor prognosis and the resistance to anticancer therapies (6-8). Recent clinical studies have shown promising clinical activity of PD-1- or PD-L1-targeting antibodies in certain malignancies, including esophageal cancer (9-11). Researches also demonstrated that PD-L1 protein expression on cancer cells may predict favorable response to anti-PD-1/PD-L1 therapy (10,12-14).

Several studies have investigated the expression of PD-L1 in esophageal cancer, whereas some conflicting results on the prevalence and the prognostic role of PD-L1 were present (15-26). Whether diversity in these data has been due to limited sample size or genuine heterogeneity is still confused. Therefore, we carry out a meta-analysis to clarify this issue.

A comprehensive literature search of electronic databases PubMed, Embase, Web of Science and China National Knowledge Infrastructure (CNKI) was performed up to July 10, 2016. Studies were selected using the following search terms: ‘esophageal or oesophageal’ and ‘cancer or neoplasm or carcinoma’ and ‘PD-L1 or programmed cell death ligand 1’. The references of articles and reviews were also manually searched for additional studies. The eligible reports were identified by two reviewers (HX Qu and LP Zhao), and controversial studies were adjudicated by a third reviewer (XJ Jiang).

We collected all eligible articles about relationship between PD-L1 expression and clinicopathological features or clinic outcome of ESCC in this meta-analysis. Studies meeting the following inclusion criteria were included: (I) PD-L1 protein expression evaluated in the primary ESCC tissues; (II) research that revealed the relationship between PD-L1 expression and clinicopathological parameters or prognosis of ESCC; (III) studies regarding the prognosis provided sufficient information to estimate hazard ratio (HR) about overall survival (OS) and 95% confidence interval (CI); (IV) if there were multiple articles based on similar populations, only the largest or the most recent article was included. The exclusion criteria included the following: (I) letters, reviews, case reports, conference abstracts, editorials and expert opinion; (II) patients had received previous chemotherapy or radiotherapy.

Two investigators (SH Zhan and CX Geng) independently extracted data from eligible studies. Disagreements were resolved by discussion and consensus. Two investigators reviewed all of researches that met inclusion and exclusion criteria. The following information was recorded for each study: name of the first author, year of publication, sample source, number of cases, detection methods, clinicopathological parameters, tumor node metastasis (TNM) stage, definition of PD-L1 positive and survival of patients. If the HR or standard errors (SEs) were not reported in included studies, we calculate or estimate the HR from available data or Kaplan-Meier curves using the methods reported by Tierney et al. (27).

Two authors (HX Qu and LP Zhao) independently assessed the quality of all studies on the basis of a 9-scores system of the Newcastle-Ottawa Scale (NOS) (28). Discrepancies in the score were resolved through discussion between the authors. Each study included in the meta-analysis was judged on three broad perspectives: (I) the selection of the groups of study (four items, one score each); (II) the comparability (one item, up to two scores); and (III) the ascertainment of either the exposure or outcome of interest (three items, one score each). A score presents a high quality choice of individual study.

Analysis was performed using the Stata 12.0 (Stata Corporation, Texas, US) and Review Manager 5.2 (Cochrane Collaboration, Oxford, UK). Comparisons of dichotomous measures were performed by pooled estimates of odds ratios (ORs), as well as their 95% CI. A P value <0.05 was considered as statistical significance. Heterogeneity was tested using the chi-square test with significance being set at P<0.10, the total variation among studies was estimated by I-Square. If there was heterogeneity among studies, we used a random effect model to pool the ORs; otherwise, a fixed effect model was selected. The potential for publication bias was assessed using the Begg’s rank correlation method and the Egger’s weighted regression method.

Twenty articles were identified using the search strategy above. Twelve of those were excluded due to laboratory studies, insufficient primary outcome data, non-original articles (review), irrelevant study to the current analysis, or research of patients that received previous chemotherapy or radiotherapy. Finally, there were eight studies (15-22) included in final meta-analysis (Figure 1).

Eight studies published from 2014 to 2016 were eligible for meta-analysis. Their characteristics were summarized in Table 1. A total of 1,350 patients from China and Japan were enrolled. PD-L1 overexpression was found in 559 patients (41.4%). Immunohistochemistry (IHC) was the only method used to evaluate the expression of PD-L1 in ESCC specimens. The definition of PD-L1 positive staining varied among the studies. 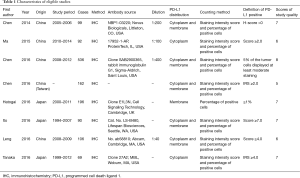 The study quality was assessed using the Newcastle-Ottawa quality assessment scale, generating scores ranging from 6 to 8 (with a mean of 6.63), with a higher value indicating better methodology. The results of quality assessment are shown in Table 1.

Heterogeneities were observed in all the analysis except for PD-L1 expression with gender and distal metastasis (Table 2), so random-effect models were used.

PD-L1 as a prognostic factor for ESCC

Seven of the eight studies included have estimated the relationship between OS and PD-L1 expression. The pooled HR for OS showed overexpression of PD-L1 tend to reduce the OS in ESCC, but the difference has no statistical significance (HR =1.65; 95% CI: 0.95–2.85; P=0.07) (Figure 2). A random-effect model was used in meta-analysis, because of heterogeneity between studies.

Egger’s and Begg’s test indicated no publication bias among these studies regarding HR about OS with P values of 0.317 and 0.230 respectively. The funnel plots were largely symmetric (Figure 3). 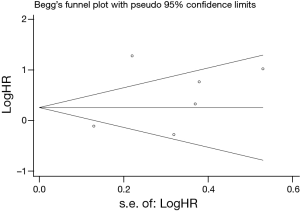 PD-L1 was reported to play an important role in regulation of T-cell mediated anti-tumor response and impact the biological characteristics of tumor cells. Recent researches had found the expression of PD-L1 was associated with multiple clinicopathological features, prognosis and response to immune check-point targeted therapies in several solid tumors (29-32).

Previous studies have also been conducted to explore the clinicopathological and prognostic significance of PD-L1 expression in patients with esophageal cancer (15-26), some of them showed overexpression of PD-L1 is associated with certain clinicopathological factors and a poor prognosis, but the results were not confirmed by other studies. Besides, there is no pooled analysis of the data according to the pathological classification of esophageal cancer. The value of PD-L1 overexpression in ESCC is still unclear. For procuring a reasonable conclusion, we combined eight eligible studies including 1,350 cases to perform this meta-analysis.

Clinicopathological features, such as differentiation, tumor depth, status of lymph node metastasis and TNM stage, which were proved to be associated with poor prognosis of esophageal cancer (33-35), have been reported correlated with PD-L1 expression in ESCC by some independent researches. But most of them were not strongly confirmed by other studies. For instance, only one of the eight enrolled researches in our analysis showed PD-L1 expression was correlated with tumor differentiation (17). Two articles identified PD-L1 overexpression was related to deeper tumor invasion (15,21). With regards to status of lymph node metastasis and TNM stage, positive results were reported in four (15,17,19,22) and two (17,22) studies respectively. Interestingly, Chen et al. found PD-L1 overexpression was associated with better lymph node status and earlier stage (17), which was completely contrary to other studies. When we pooled the data together, none of the clinicopathological features (gender, differentiation, tumor depth, lymph node status and TNM stage) was associated with PD-L1 expression. The conclusion is not the same as conventional experiences of other tumors (36-39). Differences might be caused by the mechanism of PD-L1 in ESCC, inadequate sample size or variable definitions of PD-L1 expression. Further studied is needed to resolve this conflict.

Two former articles have meta-analyzed the relationship of expression status of PD-L1 and prognostic significance in esophageal cancer (31,32). Both studies demonstrated positive PD-L1 expression status in tumor cells is a risk factor for prognosis in esophageal cancer. However, none of them have a subgroup analysis according to the pathological classification of esophageal cancer. Two major histological types of esophageal cancer, ESCC and esophageal adenocarcinoma (EAC), have different etiology, origins of tumor cells, biological behaviors, growth pattern and prognosis. Though only one study suggested PD-L1 overexpression was associated with poor prognosis of EAC (25), inconsistent results were found in researches of ESCC. In our study, the pooled HR showed high expression of PD-L1 impaired the OS of ESCC (HR =1.65; 95% CI: 0.95–2.85), whereas the difference has no statistical significance (P=0.07).

Efforts were made to conduct a comprehensive analysis, but some limitations still should be acknowledged. First, unified criteria had not been established for determining the positive expression of PD-L1 in ESCC. Various definitions of PD-L1 positivity and diverse antibodies for detecting PD-L1 expression were used in enrolled researches, which would cause heterogeneity of the overall results. Secondly, some HRs of survival data in current analysis were calculated or estimated from available data or Kaplan-Meier curves, which may have compromised the precision of the data. Thirdly, all included studies were hold in East Asia (five studies in China and three in Japan). The results need to be confirmed in a wider range of population especially in western countries. Fourthly, the number of included studies is relatively small.

Our meta-analysis revealed PD-L1 expression in ESCC was not associated with common clinicopathological features, including gender, histological differentiation, tumor depth, status of lymph node metastasis, distal metastasis and TNM stage. A trend was found that positive PD-L1 expression might impair the survival outcome of ESCC, though the difference was not statistically significant. Further large-scale studies should be performed to have a deeper insight into the precise clinicopathological and prognostic significance of PD-L1 expression in ESCC by unified testing standard.