Esophageal cancer (EC) is one of the most malignant gastrointestinal cancers worldwide (1,2). Neoadjuvant therapy followed by surgery is the standard treatment for patients with resectable thoracic esophageal squamous cell carcinoma (ESCC) (3-5). However, most patients in China generally prefer surgery to neoadjuvant therapy as their initial treatment (6,7). Surgery alone has shown rather disappointed survival rates, which the 5-year survival rate is only 20–40%. Furthermore, approximately half of the patients may experience locoregional recurrence, which may result in a decreased survival (8,9). Various studies have suggested that the recurrences of esophageal carcinomas after radical surgery tend to occur in the bilateral supraclavicular (SCV) areas. Wu and colleagues (10) indicated that after surgery, the SCV lymph node (LN) was the most common site of recurrence regardless of the tumor location. Even among patients with lower thoracic ESCC, the incidence of SCV LN recurrence was as high as 33.8%. Similar to finding of Wu and colleagues, Cai et al. (6) performed a study to investigate the patterns of regional LN recurrence after radical surgery for ESCC. The results showed that SCV areas were the most common site of recurrence, followed by mediastinal and abdominal areas. As such, several studies also indicated that the incidence of SCV LN recurrence was a common site of recurrence after radical surgery (range, 33.3% to 75.0%) (7-9). The available data indicates that postoperative radiotherapy could reduce locoregional recurrence and improve overall survival of ESCC patients. Furthermore, the major of studies suggested that the SCV areas should be included in prophylactic radiotherapy for patients with upper, middle, and lower thoracic EC (6,11-13).

However, delineating the SCV region lymph nodal clinical target volume (CTVn) for esophageal carcinoma remains a challenging task. Currently, data documenting the precise location of involved SCV region LN in esophageal carcinoma are scarce. It is desirable to define detailed involvement patterns in the SCV region, so that these areas can be better covered and treated with an adequate radiation dose. Here, we describe the distribution of SCV LN metastasis for esophageal carcinoma patient after surgery according to computed tomography (CT) imaging in our institution, then analyzed the anatomic distribution of SCV region LN to outline the spatial and probabilistic distributions of LN, and to provide data for an evidence-based approach to SCV region radiation therapy field design. Thus, we could minimize inconsistency of irradiation field and to achieve precise radiotherapy of the SCV region for postoperative radiotherapy.

We retrospectively reviewed the records of patients with thoracic ESCC patients from June 2009 to July 2014 in our hospital. This retrospective review was approved by the institutional review board at the Shandong Cancer Hospital and Institute (No. 20160401). All patients had been pathobiology confirmed as ESCC. Tumor stage and disease grade were classified according to the seven edition of the TNM classification of the American Joint Committee on Cancer (AJCC). The eligible criteria for inclusion in the study were a diagnosis of metastatic SCV regional LN at first recurrence that underwent two-field radical resection; postoperative pathology indicating negative surgical margins; no previous radiation therapy to SCV regional LN or neck surgery to patients; and diagnostic CT scans of the SCV region available.

All CT images were reviewed and interpreted by two experienced radiological experts. Only those with qualified CT images explicitly exhibiting the sizes and locations of malignant nodes in the whole range of the SCV and lower neck were included. Positive LN in our study were included based on the FDG avidity and CT appearance of the node. Features supporting a consideration for metastatic included inhomogeneous enhancement or the presence of an infiltrative margin, the presence of necrosis, at locations uncommon for reactive nodes; a LN with a short axis >10 mm; a LN with a short axis less than 10 mm combined with hoarseness or vocal cord paralysis was defined as recurrent disease; positive biopsy; and obviously responsive to anticancer treatment (14-16).

The definition of subgroup and LN mapping

The SCV regional LN of esophageal carcinoma is divided into the left and right sides of the body midline, and each side was further divided into four subgroups based on the Japan Esophageal Society (JES) (17,18): group I (No. 100 superficial LN of the lower neck): cervical pretracheal LN located in the pretracheal fatty tissue, extending from the hyoid bone superiorly, to the left brachiocephalic vein inferiorly, including the prethyroidal LN and the prelaryngeal LN; group II (No. 101 cervical paraesophageal LN): LN located around the cervical esophagus, including LN located along the recurrent laryngeal nerve and the cervical paratracheal LN. The lateral boundary is the medial border of the carotid sheath; group III (No. 104 SCV LN): LN located in the SCV fossa, extending from the lower border of the cricoid cartilage superiorly, to the clavicle inferiorly, including the lower internal deep cervical LN, the medial boundary is the medial border of the carotid sheath; group IV (posterior cervical LN level Vb): LN extending from lower margin of the cricoid cartilage to the upper border of the manubrium, posterior edge of the sternocleidomastoid. The anatomic diagrammatic sketch of the SCV nodes region is shown in Figure 1. 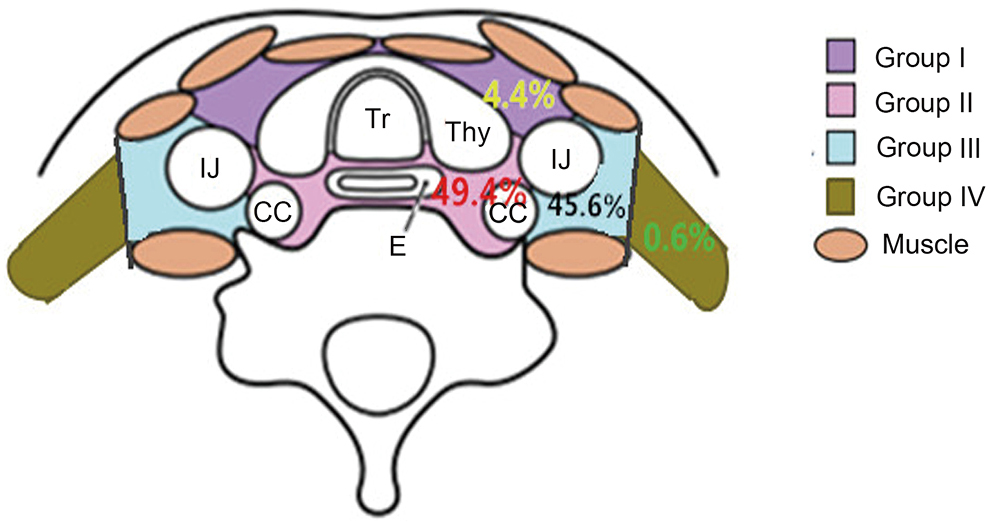 Figure 1 The supraclavicular (SCV) regional lymph node (LN) of esophageal carcinoma is divided into the left and right sides of the body midline, and each side was further divided into four subgroups. The probabilities of positive LN in each group were 4.4%, 49.4%, 45.6%, 0.6%, respectively.

The locations of the involved SCV nodes for all patients were then transferred onto a template CT image (registered by hand drawings from the diagnostic CT scan onto the template CT scan) according to methods previously described (19-22). The volumetric center of each LN was identified and used for subsequent characterization of location. All mapped LN locations were individually reviewed and registered most precisely into template CT image based on the location of original CT image by a radiologist and by two radiation oncologists. A volume probability map was then generated with nodal volumes, and was displayed on the template CT for a visual representation of the axial density of distribution (Figure 2). Finally, our findings may provide a reference for identification of the targets for postoperative radiotherapy for ESCC patients. 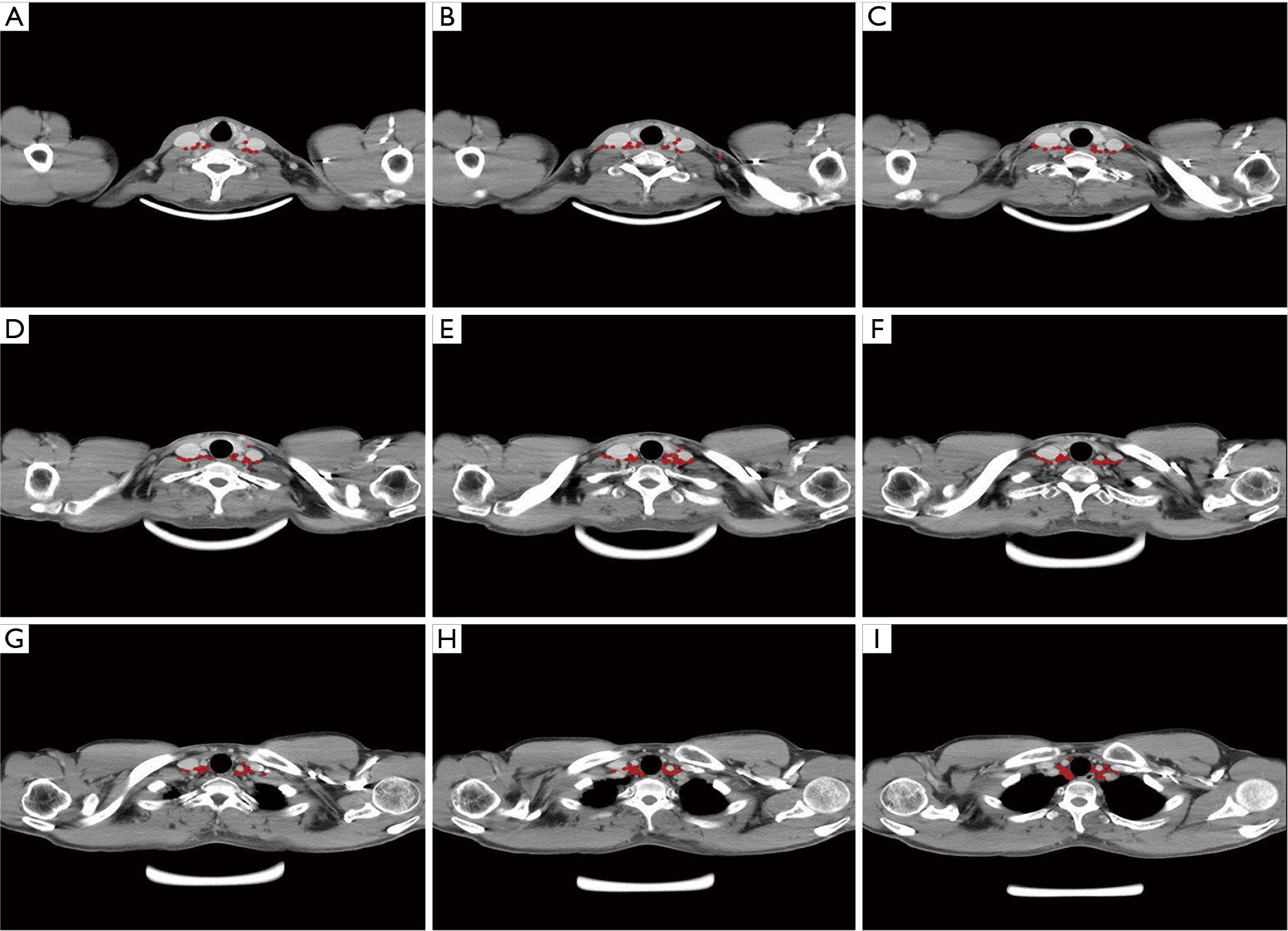 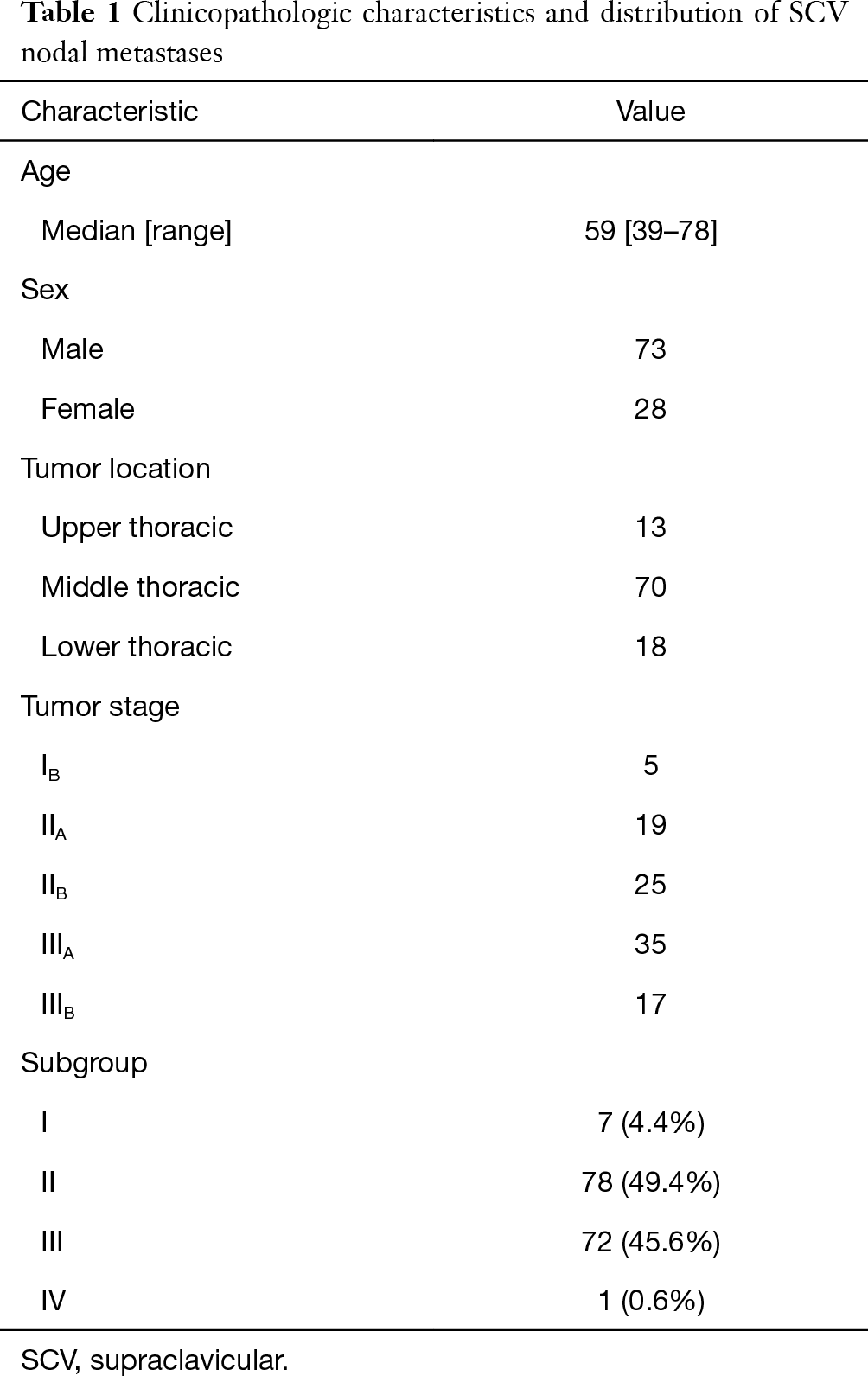 Distribution of SCV nodes at recurrence after surgery

This atlas serves as an available template for the elective treatment of SCV nodes in postoperative prophylactic radiotherapy for high risk patients.

In our study, the LN group with a probability of 10% or more (an empirical cutoff value) of being involved was recommended containing in the CTVn. According to our study, of the 158 nodes, 4.4% were located in group I region, 49.37% in group II, 45.6% were located in group III, and 0.63% located in group IV. More than 90% of the LN was distribution in the group II and III region. Therefore, the SCV group II and III region LN are considered to be the high risk regions of LN metastasis, which were defined as elective nodal irradiation (ENI) region. The proposed contours for SCV LN targeting are showed in Figure 3. 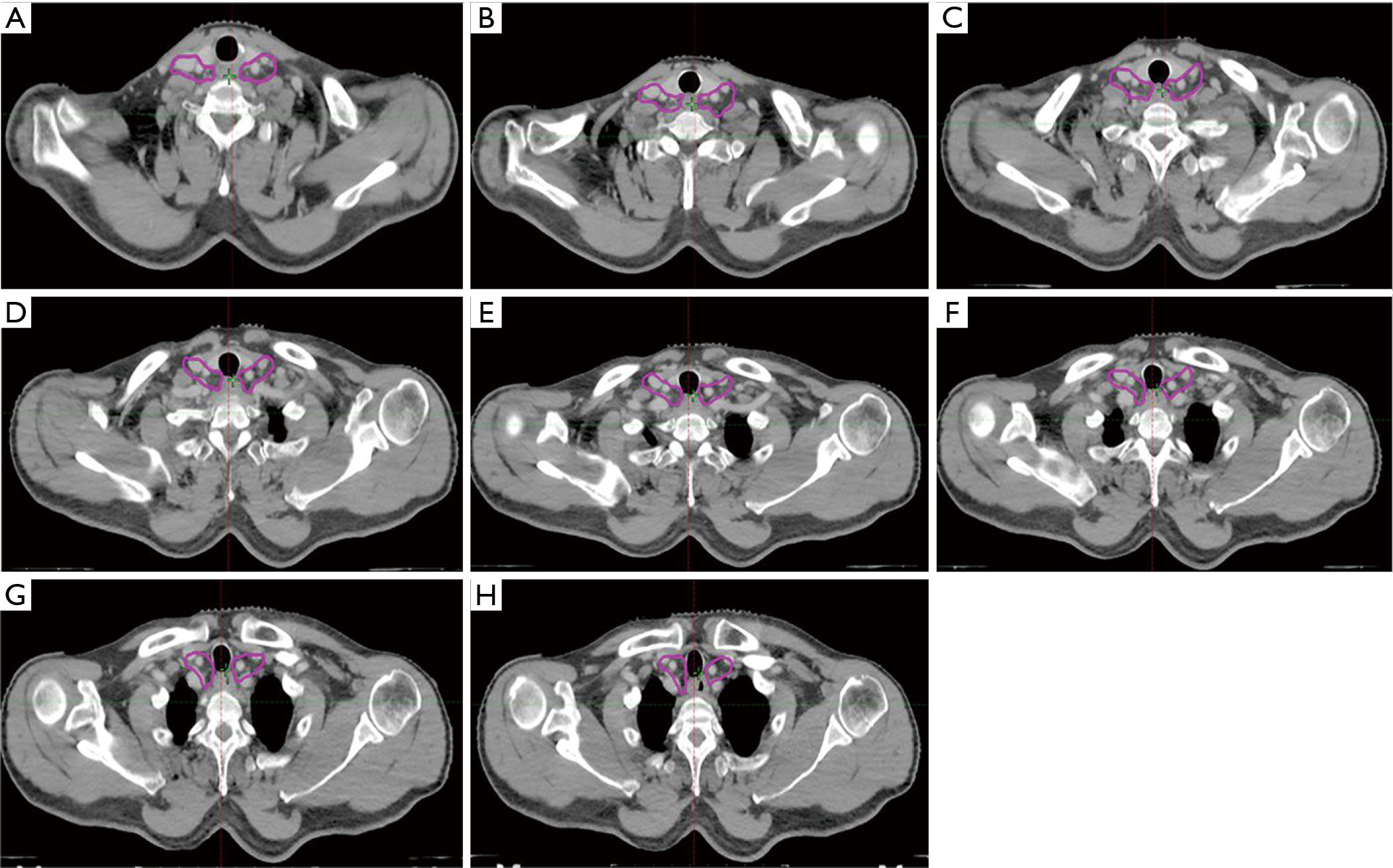 Optimal conformal radiation therapy of the SCV regional LN requires precise target identification and delineation to minimize toxicity. Because of inadequate data on the anatomical distribution of involved LN, patients treated with a SCV field usually have no evidence of gross SCV disease and target volumes are often defined primarily on the basis of the distribution of normal lymphatics or by vascular and bony landmarks that have traditionally been used for field design. However, a large lateral extent of the conventional SCV irradiation field theoretically provides a better regional control, while the radiotherapy-related toxicities cannot be ignored. In the breast cancer, there some study demonstrated that a large lateral extent of the SCV irradiation field could exist regarding the increased risk and severity of toxicity by irradiating extra volumes, especially lymphedema, lung damage, and brachial plexopathy. A prospective study by Warren showed that SCV irradiation was a significant independent risk factor for lymphedema in 1,476 patients, with 21% and 3% of patients developing lymphedema with and without SCV irradiation, respectively (23). Graham et al. also showed that irradiation lateral to the coracoid process was a significant risk factor for lymphedema (P=0.002) (24). The MA.20 trial, in which the SCV field included the head of clavicle medially and the coracoid process laterally and the level I–II axilla irradiated in about 32% of patients, showed that the regional nodal irradiation group had higher rates of lymphedema (8.4% vs. 4.5%; P=0.001) and grade 2 acute pneumonitis (1.2% vs. 0.2%; P=0.01) (25). Some researcher investigated the feasibility of ENI and involved-field radiotherapy (IFRT) in radiotherapy for EC, and those date revealed that the treatment-related toxicities were better in the IFI group than in the ENI group. Those date indicated that extending the radiation more laterally would be associated with more toxicity (26,27). Furthermore, another purpose of our study is to reduce unnecessary irradiation, which has the potential to reduce normal tissue toxicity. Hence, it is important to accurately define the SCV nodal region at risk, which could better cover target areas and spare normal tissues.

Our study did have some limitations, among them the retrospective nature of the analysis, with which we could not account for all possible biases. First, our findings are based on an interpretation of CT imaging and not on pathology assessments. Therefore, we cannot prove that all of the identified enlarged LN contain metastatic disease. Second, disadvantages in node registration by hand drawing onto one standard model are inherent. Deformity image registration followed by hand modification might further improve the accuracy and efficacy of the transfer. Finally, for some patients with T3 or N1 disease or greater with neoadjuvant therapy plus surgery, whether the results of our study applies to the patients receiving neoadjuvant therapy still needs further study.

Although our study has limitations, we consider this an important step in further defining the nodal regions at risk in the SCV region. We present a probability map demarcating areas with the greatest incidence of SCV node involvement that may be used to refine target volumes. Our proposed contours may minimize inconsistency of irradiation field and to achieve precise radiotherapy.

To our knowledge, there are seldom studies investigated the CTV of SCV region in esophageal carcinoma to date. The study provides the radiation oncologist with valuable information regarding the anatomic distribution of SCV metastases, which may serve as a “template” to guide CTVn delineation of SCV region for postoperative prophylactic radiotherapy. In summary, the SCV group II and III regions are considered to be the ENI areas.

Funding: This study was funded by Natural Science Foundation of China (NSFC 81672995) and The Key Research and Development Program of Shandong Province (2016GSF201133).

Ethical Statement: This retrospective review was approved by the institutional review board at the Shandong Cancer Hospital and Institute (No. 20160401).