Parapneumonic effusions complicate the clinical course of 20−40% of hospitalized patients with pneumonia (1) and grossly affect morbidity and mortality rates (2). Pleural infections may be classified into three distinct phases based on the progression of infection, i.e., exudative (simple parapneumonic effusion), fibrinopurulent [complicated parapneumonic effusion (CPPE)], and organizing (empyema). The treatment of parapneumonic effusions remains challenging as there is a lack of consensus in the literature and treatment options vary widely. Conservative treatment with antibiotics, chest tube thoracostomy, video-assisted thoracic surgery (VATS) drainage, decortication, and open thoracotomy have been used in the management of the disease. In general, surgery should be considered when antibiotics or chest tube drainage fail. VATS pleural adhesiolysis and decortication have increasingly emerged as feasible procedures for the treatment of CPPE/empyema (3-5), especially in the fibrinopurulent stage. Notably, symptom duration is a reliable preoperative factor in guiding the use of thoracoscopic drainage and decortication, with shorter persistence being associated with better outcomes (6). Although the American College of Chest Physicians (ACCP) and the British Thoracic Society (BTS) guidelines indicate that a pleural fluid pH below 7.2 represents an indication for chest tube drainage, there is still a lack of consensus on both patient selection for surgical intervention and its optimal timing. In this scenario, surgical treatment decisions continue to be guided by the clinical status of the patient (e.g., presence of fever and/or leukocytosis) and imaging findings (chest X-ray and CT), mainly by relying on the physician’s subjective assessment. In this setting, delays in surgical intervention or simple observation—albeit prudent may lead to a deterioration of the patient status and suboptimal postoperative outcomes. We therefore designed the current retrospective study to identify the main predictors of a surgical approach and devise a simple scoring system that could guide surgical decision-making in patients with parapneumonic pleural effusion.

The study protocol followed the tenets of the Helsinki Declaration and was approved by the Institutional Review Board of the Chang Gang Memorial Hospital. Because of the retrospective nature of the study, the need for informed consent was waived. Appropriate de-identification and anonymization of electronic health record data were performed. Patients who presented with exudative pleural effusion secondary to pneumonia and were successfully discharged between 2005 and 2014 were eligible for inclusion. In contrast, patients were excluded if they showed: (I) transudative pleural effusions or (II) exudative pleural effusions not caused by pneumonia (e.g., post-traumatic effusions, malignant effusions, tuberculosis-related effusions, drug-related effusions, collagen disease-related effusions, or effusions of unknown etiology). The primary endpoint of this retrospective study was the length of hospital stay. A total of 276 patients were included in the study and randomly divided into a training set (n=201) and validation set (n=75). Patients in the training set were further subdivided into two subgroups according to their treatment modality (non-surgery vs. surgery). Group 1 included 126 patients who was successfully treated with antibiotics alone (non-surgery group), whereas group 2 consisted of 75 patients who underwent surgical debridement or decortication (surgery group). Clinical symptoms, laboratory data (analysis of the pleural fluid), imaging findings (chest sonography and computed tomography), and the use of chest-tube drainage were compared between the two groups. All analyses of the pleural fluid as well as chest sonography and computed tomography were performed within 48 h of thoracentesis. Age, sex, and the presence of comorbidities (e.g., hypertension, diabetes mellitus, lung disease, renal failure, liver cirrhosis, malignancies, or cerebrovascular accidents) were also examined and compared.

Continuous variables are summarized as means and standard errors of the mean and compared using one-way analysis of variance (ANOVA) or paired Student’s t-tests, as appropriate. The Fisher’s exact test was used to analyze categorical variables. Multivariable logistic regression models were constructed to identify the independent predictors of a surgical approach. Based on the identified predictors, we devised a simple scoring system that may guide surgical decision-making. Each predictor was weighted based on the associated odds ratio on multivariable analysis. Specifically, each odds ratio coefficient was initially divided by the lowest odds ratio coefficient and subsequently rounded off to produce a weighted score. After calculating the score of each patient, its value for surgical decision-making was investigated. The point at which sensitivity and specificity of the score were maximized was selected as the optimal cutoff point (7). The scoring system developed in the training set was then tested in the validation set. All calculations were performed with the IBM SPSS Statistical Package, version 20.0 (IBM Corp., Armonk, NY, USA). Two-tailed P values <0.05 were considered statistically significant. 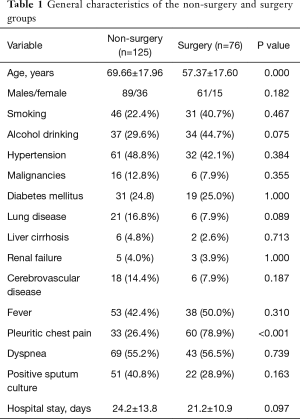 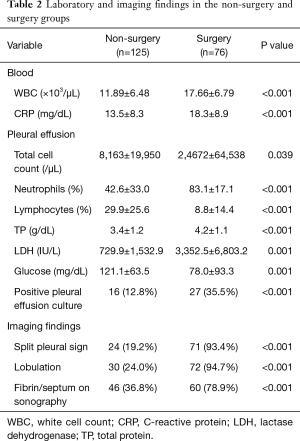 Table 4 Sensitivity, specificity, and area and curve (AUC) for each factor used for devising the weighted scoring system
Full table

The distinction between uncomplicated parapneumonic effusion vs. CPPE or empyema remains challenging. In addition, surgical decision-making continues to be guided by the physician’s discretion based on personal experiences. Because the progression from uncomplicated parapneumonic effusion to empyema may occur rapidly, the prompt identification and surgical treatment of CPPE or empyema are associated with better clinical outcomes and decreased mortality (6). Based on the meta-analysis conducted by the American College of Chest Physicians (8) and the European Association for Cardio-Thoracic Surgery expert consensus (9), surgical treatment of CPPE and empyema (regardless of an open or a VATS approach) is characterized by superior success rates compared to non-surgical strategies (e.g., therapeutic thoracentesis, tube thoracostomy, and ﬁbrinolysis). Moreover, surgical treatment is superior to simple drainage for reducing all-cause mortality. Other studies (6,10,11) similarly demonstrated that early surgery resulted in excellent outcomes without significant mortality in patients with CPPE or empyema. The biochemical characteristics of the pleural fluid serve to guide the use of tube thoracostomy in clinical practice. However, simple tools that could help to select candidates for surgery are still lacking. This study was designed to fill this critical knowledge gap.

Our results indicated that a white blood cell count >13,500/µL, pleuritic pain, loculations, and split pleura sign were independent predictors of surgical treatment. We then combined these risk factors into a simple scoring system that may guide surgical decision-making in patients with parapneumonic pleural effusion. As shown in Table 1, the clinical symptoms in the two study groups were similar, the only exception being pleuritic chest pain (which is characterized by a sharp discomfort located near the chest wall exacerbated by inspiration). Despite its nonspecific nature, pleuritic chest pain was identified as an independent predictor of surgery—possibly because of its significance as a proxy of parietal pleura inflammation severity. Current ACCP and BTS guidelines suggest that certain biochemical characteristics of the pleural effusion (e.g., pH, glucose, and LDH levels) may be useful to guide the use of chest tube drainage. Unfortunately, no reliable indicators of the need for surgical intervention have yet been identified. In addition, pH measurements pose some preanalytical challenges (12,13). The results of our study indicated that pleural LDH and glucose levels were increased and decreased, respectively, in patients treated with surgery (Table 2). However, both variables were not retained as independent predictors in multivariate analysis—suggesting their limited utility to guide surgical decision-making. Other markers of systemic inflammation—including CRP, interleukin-18 (14) and soluble Fas ligand (15)—have been associated with the presence pleural infections but their significance remains controversial. In general, the distinction between parapneumonic pleural effusion and complicated parapneumonic pleural effusion/empyema poses a diagnostic dilemma for physicians and surgeons. An interesting finding in the current study is that a WBC count >13,500/µL was an independent predictor for surgical intervention. The WBC count is a widely recognized indicator of inflammation for use in medical practice. Our current results support the role of WBC count as a simple, inexpensive, and readily available marker for risk stratification of patients with parapneumonic pleural effusion.

Because no reliable markers exist for differentiating between uncomplicated parapneumonic pleural effusion and complicated parapneumonic pleural effusion/empyema, imaging findings are expected to play a key role in identifying the need for surgical intervention. Accordingly, loculations and split pleura sign were identified as the two strongest predictors for surgical decision-making. Loculations can serve as a useful sign for the progression of parapneumonic effusions from the exudative to the fibrinopurulent stage (16). Although Light et al. (1) identified pleural chemistry—and not loculations—as the key factor to guide the use of tube thoracostomy, it can be argued that loculated effusions were infrequent in their study (because decubitus films were obtained within 72 h and thoracentesis was performed only when the fluid layer was at least 10-mm thick). In another study (17), parapneumonic effusions were divided into seven classes (from nonsignificant parapneumonic effusion to complex empyema) and loculations were used as a diagnostic tool in complex complicated parapneumonic effusion and empyema. Although the presence of loculations correlates with the presence of a fibrinopurulent exudate, radiological signs for the diagnosis of CPPE/empyema are lacking (16). The split pleura sign—which can be identified on contrast-enhanced chest CT images—is defined by an enhancement of the thickened inner visceral and outer parietal pleura separated by a collection of pleural fluid (18). In parapneumonic effusion, excess fluid accumulates in the pleural cavity because of an increased capillary permeability. Effusions may then progress to empyema because bacteria may penetrate through the damaged endothelium (19). A fibrin peel coats the surface of the visceral and parietal pleural layers as the empyema progresses, with subsequent vessel growth and collagen deposition. The resulting thickening of the parietal and visceral pleura separated by fibrinopurulent strands represents the anatomical basis of the split pleura sign (20). In the literature, split pleura sign is used to different between lung abscess and empyema, however, it has been previously reported that the split pleura sign may be useful for differentiating CPPE/empyema from uncomplicated parapneumonic pleural effusion (21). Our results confirm and expand previous data by showing that the split pleura sign was the strongest single predictive factor in our weighted scoring system.

Another interesting observation inherent in our study is that patients who received surgery were significantly younger that those treated with a non-surgical approach. We speculate that some patients could have received medical treatment because advanced age places individuals at increased risk for surgical complications. In this regard, a previous report (22) demonstrated that surgeons tend to select relatively healthy patients as candidates for elective surgery. Nonetheless, the authors demonstrated by propensity-score matching that surgical decortication was superior to non-surgical treatments for patients with empyema.

Several caveats of our study merit comment. First, the retrospective nature of our study and the small sample size limits the generalizability of our conclusions. Our score needs independent validation in larger independent clinical cohorts before being implemented in clinical practice. Second, our study was not designed to investigate the impact of our score and/or surgery on morbidity and mortality rates. Third, pleural effusion pH measurements are not routinely performed in our hospital. This is mainly due to barriers in implementing standardized specimen collection procedures (e.g., need to avoid exposure to atmospheric air conditions or local anesthetics, requirement of a blood gas analyzer) for this specific analytical assay. Finally, our main goal was to devise a scoring system that would allow early identification of patients in need of a surgical intervention. No obvious clinical outcome is linked to our analysis, and we are aware that this is a significant limitation inherent in our study. We nonetheless believe that our present findings may stimulate further validation of our scoring system in independent clinical cohorts, additionally including investigation of its potential relations with meaningful clinical outcomes.

In conclusion, we devised a weighted scoring system consisting of simple clinical variables to identify patients with parapneumonic pleural effusion who are ideal candidates for surgery. We hope that our score will allow early recognition of empyema, ultimately reducing morbidity and mortality.

Ethical Statement: The study protocol was reviewed and approved by the Institutional Review Board (IRB) of the Chang Gung Memorial Hospital (IRB No. 103-7310B). The need for informed consent was waived by the IRB.