Tracheobronchial tuberculosis (TBTB) is diagnosed on histopathological examination of bronchoscopically obtained specimens showing granulomatous inflammation with caseation necrosis and/or positive acid fast bacilli culture on the microbiological exam. Specimen for culture can also be obtained from sputum but it is less sensitive compared to bronchial washing, biopsy or bronchoalveolar lavage; as described by Qingliang et al. in China where only 3/22 (13%) patients were sputum acid fast bacilli positive, and the remainder required bronchoscopic sampling for the diagnosis (1,2). The diagnosis of TBTB is often delayed due to its non-specific clinical symptoms. The course of endobronchial tuberculosis is highly variable and can range from complete resolution of the disease to fibrotic central airway obstruction (3).

About 68% of the patients with TBTB develop some degree of bronchostenosis in the initial 4–6 months of the disease and up to 90% of patients have some degree of stenosis beyond this initial time period (2,4,5). Among patients with active disease involving the pulmonary parenchyma, 10–39% of patients are shown to have a component of TBTB (6). Initial treatment is a 4 drug regimen therapy as in pulmonary tuberculosis. However, due to a highly unpredictable disease progression when it involves the tracheobronchial tree, future interventions including bronchoscopic airway dilation or stent placement may be necessary.

Although the exact pathogenesis of TBTB is not well understood, at least four different pathways are proposed leading to infection of tracheobronchial mucosa by mycobacteria tuberculi. Anyone or combinations of these pathways may lead to infections. In 1951, Smart proposed different methods of infection which included:

TBTB can be clinically divided into active disease (bronchoscopic findings of active caseating material, ulceration or granulation tissue formation or histologic findings of caseating necrosis or a positive tubercle bacilli on culture) and fibrotic diseases (fibrosis seen on bronchoscopic view or biopsy-confirmed fibrostenotic tuberculosis often found to be culture negative) (7). During the healing phase of active endobronchial tuberculosis, cicatrization can cause mucosal ulceration, necrosis and fibrosis leading to stenosis (6).

Figure 1 A 33-year-old South Korean female with history of treated TB, with 10 years diagnosis of asthma. (A) Flow volume loop with moderate flattening of the inspiratory and marked flattening of the expiratory limb; (B) distal tracheal stenosis with airway diameter of 8 mm; (C) right and left main stem bronchi stenosis measured 2.8 and 5.5 respectively.

When treating endobronchial tuberculosis, two important goals are of utmost importance: eradication of tubercle bacilli and prevention of the most undesirable consequence, stenosis (28). While anti-tuberculous chemotherapy is efficient in controlling the infection, it does not appear to be a successful method in preventing residual TBTB (15,26,29) In a study done in South Korea Um et al. retrospectively looked at the predictors of persistent airway stenosis in 67 patients with microbiologically or histologically confirmed endobronchial tuberculosis that had completed anti-tuberculosis therapy. Patients received at least two bronchoscopies and endobronchial lesions were characterized as one of the seven subtypes originally described by Chung et al. (26). They reported the treatment outcome based on the degree of stenosis that was seen between the first and the second bronchoscopy, the second bronchoscopy was done at the completion of anti-tuberculous therapy. Persistent bronchostenosis occurred in 41.8% of the patients. In multivariate regression analysis, age >45 years, pure or combined fibrostenotic subtype and duration from onset of chief complaint to the initiation of anti-tuberculosis chemotherapy >90 days were identified as independent predictors of persistent airway stenosis. Oral corticosteroids (prednisolone equivalent >30 mg/d) did not reduce the frequency of persistent airway stenosis.

Treatment of TBTB depends on the stage at which the diagnosis is made. In the active phase of the disease, the goal is to control the infection and prevent tracheobronchial stenosis. There is no clear evidence that any single mode of therapy can decrease the incidence of TBTB in this patient population (3). The following management strategies are proposed in the literature. 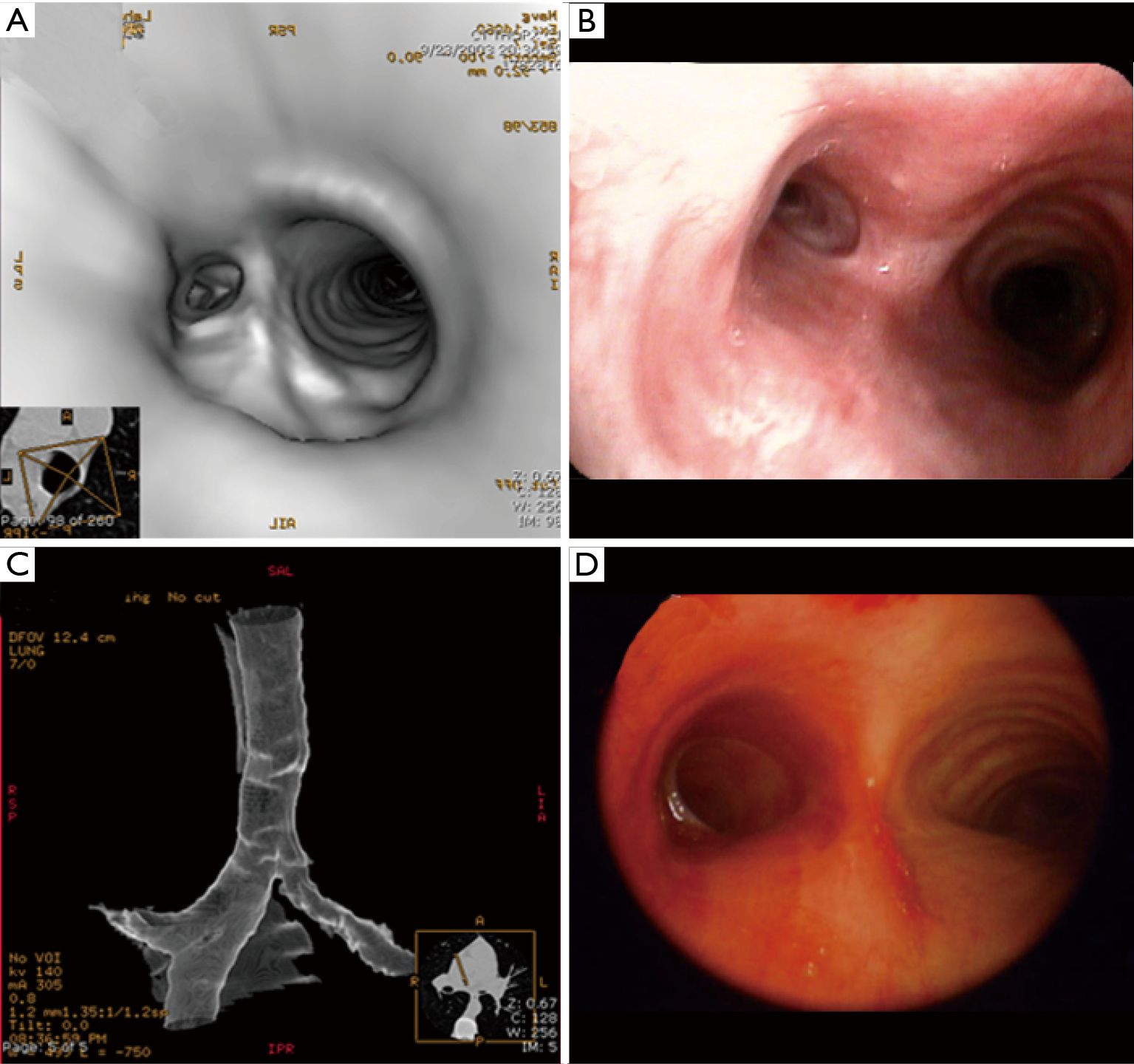 Iwamoto et al. (38) retrospectively assessed the efficacy of bronchoscopic techniques in treating airways stenosis in 30 patients due to TBTB. Twelve of 30 patients continued to have dyspnea, cough and repeated obstructive pneumonia due to tracheobronchial stenosis. One of 12 patients required pneumonectomy and the remainder underwent bronchoscopic interventions. The left main stem was the most involved site (8 patients). Tracheobronchial stents were inserted in 6/11 patients, 3 patients receiving silicone straight stents and the remaining three patients received silicone Y-stent. The remaining five patients only required balloon dilatation. There was significant improvement in symptoms in all patients. Minor complications including stent migration and granulation tissue were reported in the patients who had stent placement. The investigators did not report data on stent removal and long term follow up. As shown in this study, in about 30–40% of patients (38,41) balloon dilatation alone is sufficient. Radial endobronchial ultrasound is useful in examining the underlying cartilage, and any evidence of damaged cartilage warrants consideration of stent placement to support the airway as tracheobronchomalcia is a common finding in this patient population (38). Argon plasma coagulation, laser and cryoprobe can be used to remove the granulation tissue before or after dilatation and before stent placements.

When airway stenting is required, use of silicone stents is preferred. In the setting of benign airway stenosis such as TBTB, we recommend against the use of expandable metallic stents, particularly due to their increased risk of airway wall trauma and perforation, fatigue or rupture of the metallic stent and difficulty in retrieving the stent (39,40). Silicone stents instead are found to be removed easier and are less prone to granulation tissue formation. However, there are reports of self-expandable metallic alloy nitinol stents used for tuberculosis induced tracheobronchial stenosis (36-38,42).

Ryu et al. (36) in a retrospective study evaluated the role of bronchoscopic interventions including silicone stenting at a tertiary referral hospital in South Korea. Eighty patients underwent bronchoscopic intervention for the treatment of post tuberculous tracheobronchial stenosis over a period of 4 years. These interventions included balloon dilatation, neodymium-yttrium aluminum garnet laser resection as first line methods of airway dilation. The median luminal diameter was 9.5 mm in the trachea and 5 mm in bronchus when the lumen was measured by bronchoscopy.

Silicone stents were required in 75/80 (94%) patients. Interventions were performed in patients who were symptomatic from post tuberculous tracheobronchial stenosis (progressive dyspnea, recurrent post-obstructive pneumonia or atelectasis of the lung or reduced lung function). There was a female predominance and median of 33 years of age and the most common involved location was the left main stem bronchus (65%).

Stents were removed in 54/75 (72%) patients after a median of 14 months. Fourthy nine of 54 patients had a successful stable clinical course during a follow up period of 36 months. However, 5 patients showed recurrence and needed re-stenting. These 5 patients along with remaining 18 patients (total 23 patients) required prolonged stent placement (median 32 months). Three patients showed no response to bronchoscopic intervention and needed surgical resection involving end to end anastomosis. During a median follow up period of 41 months, clinical outcome was unchanged in all patients.

Subgroup analysis between those who had their stents successfully removed and those who continued to have stents showed that patients with prolonged stent placement had a lower baseline FEV1 and need for more re-intervention. Granulation tissue and re-stenosis were also more common in patients who required re-stenting and those stented for longer duration.

Minor complications such as cough, mucus plugging and blood tinged sputum was seen in majority of the patients. Eight of 80 (10%) patients experienced major complications which included massive bleeding leading to respiratory failure and requiring blood transfusion and mechanical ventilation, Pneumothorax occurred in five patients and pneumomediastinum in two patients and there was no mortality.

Similarly, Wan et al. (43) published their experience with silicone stents in patients with tuberculosis-induced tracheobronchial stenosis over 7 years. Seven patients with a mean age of 43 years underwent a total of 11 dilatations with placement of 10 straight stents and 1 Y stent. Stents were left in situ for a mean of 32 months. One patient had pneumothorax and two patients had migration of the stents requiring stent revision. There was no mortality. These and other studies conclude that silicone stents are safe in the management of patients with tuberculosis-induced tracheobronchial stenosis (36). There are no definite guidelines on the required duration of stent placement in the airway. Based on published data from investigators in high prevalent areas with tuberculosis, an attempt can be made to remove stents in 8–16 months after placement (36,44). These studies highlight the role of advanced therapeutic bronchoscopy procedures in the management of chronic fibrostenosis in the central airways following tuberculosis and anti-tuberculous therapy. Airway stent placement can serve as a temporary therapeutic intervention followed by successful stent removal with no need of re-intervention.

TBTB can present with and without evidence of parenchymal disease on imaging. The course of the disease in unpredictable but delay in medical therapy is shown to increase the likelihood of progression to fibrostenosis. Early diagnosis and treatment is often missed due to its varied clinical presentation. Patients with pulmonary tuberculosis presenting with continued respiratory symptoms after treatment should be evaluated for tracheobronchial stenosis. Interventional bronchoscopic approaches should be considered to restore airway patency.