Mitral valve cleft (MVC) is a complete or incomplete cleft in part of the mitral valve due to congenital mitral hypoplasia. This condition may be present with or without other congenital heart defects (1). A cleft that is not associated with a septal defect is defined as an isolated MVC. Isolated anterior mitral leaflet clefts are rare, and isolated posterior mitral leaflet clefts are extremely rare, with only a few cases reported in the literature (2). MVC is the most common cause of congenital mitral regurgitation (MR), and surgical correction might be an effective treatment for patients with MVC, especially for those with moderate to severe MR (even if asymptomatic) (1). Therefore, it is important to determine the location, shape and size of the MVC when selecting a surgical procedure for treatment. Transthoracic real-time 3-dimensional (3D) echocardiography (RT-3DE) is a simple and fast imaging study that can collect real-time images and dynamically show the MVC structure and jet flow (3,4). In this study, RT-3DE was utilized to diagnose MVC and analyze the data from the patients studied. The RT-3DE findings were compared with intraoperative findings to verify the diagnostic accuracy of RT-3DE. and the clinical value of RT-3DE was also addressed in this study.

From October 2012 to June 2016, 963 patients underwent 2-dimensional (2D) echocardiography in our hospital, Significant MR was diagnosed in 242 patients. And 19 consecutive patients with MVC were selected for this study. Of the 19 patients studied, only 5 out of the 15 patients who had ever undergone echocardiography were diagnosed with or suspected to have MVC. The patients’ history, preoperative and postoperative clinical data, and intraoperative findings were obtained from the medical and surgical records. Written informed consent was obtained from the participants, and the study was approved by the Hospital Ethics Committee.

The 2D ultrasonography was performed with the patient in the supine or lateral position and was monitored by electrocardiography. The parasternal long-axis view of the left ventricle, the short-axis view of the left ventricle at the level of the mitral valve, and the apical 4-chamber view should be primarily taken to observe the structure, shape and function of the mitral valve and to determine the origin and magnitude of the MR. According to the color Doppler regurgitant jet area, the magnitude of MR can be categorized as none, trivial, mild, moderate and severe MR. An initial diagnosis can be obtained by 2D ultrasonography. The real-time 3D ultrasound mode can be launched while the images are clearly displayed. In this setting, the mitral valve can be examined in the short-axis and apical 4-chamber views in the “live 3D” mode. The images can be saved on this device by pressing the “Acquire” button. The 3D images can be obtained by switching to “full-volume” mode. Finally, the abnormal regurgitant signals can be acquired by switching to “3D color” mode. The images for this study were saved on the device.

The 3D images saved on the device can be reviewed. The horizontal, sagittal and coronal planes, as well as 3 mutually perpendicular planes, can be displayed by pressing the “Corp adjust” button. and the images can be cropped in any of 3 planes. The 3D anatomical structure and the spatial position of the mitral valve can be observed by rotating and cropping the 3D images to acquire the desired images showing the position and shape of the mitral valve.

Of the 19 patients, 17 with moderate or moderate-severe MR underwent valve repair or replacement. The 3D ultrasound diagnostic results were compared with the intraoperative findings.

The 19 patients included 8 men and 11 women with a mean age ± SD of 30.2±10.2 years (range, 13–65 years). Eighteen patients had no clinical symptoms, and 1 patient presented with difficulty breathing. A II-IV/6 systolic murmur was audible at the left sternal border and the 2–3 intercostal space in 17 patients. The electrocardiogram showed sinus rhythm in all patients.

In the 19 patients studied, 2D ultrasound revealed MVC with secondary atrial septal defects in 4 patients, endocardial cushion defects in 5 patients, ventricular septal defects in 3 patients, patent ductus arteriosus in 2 patients, tetralogy of Fallot in 1 patient, isolated anterior leaflet clefts in 3 patients and isolated posterior leaflet cleft in 1 patient (Table 1). The short-axis view of the left ventricle at the level of the mitral valve is the optimal view for identifying MVC and can be used to display discontinuity of mitral valve echo in the end-diastole, to detect echo drop-out, to identify the specific location of the leaflet cleft and to measure the maximum width of the leaflet cleft. However, it is difficult to measure the shape and the maximum of the longitudinal diameter using 2D because the leaflets and the mitral annulus are located at different levels. Color Doppler flow imaging revealed moderate and moderate-severe regurgitation in 17 patients (Table 1). 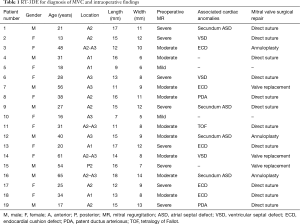 RT-3DE can directly show the 3D structure of the MVC in multiple views, such as the position, shape, longitudinal diameter, and width of the MVC as well as the spatial position between the chordae tendineae surrounding the MVC and the aortic valve. In the patients studied, the average longitudinal diameter of the leaflet cleft was 12.02±2.12 mm (range, 7–18 mm), and the average width was 7.23±1.94 mm (range, 5–15 mm) (Table 1). The anterior leaflet cleft of the mitral valve manifested as a regular shape in 13 patients. V-shaped clefts in the opening of the mitral valve and I-shaped clefts in the closing of the mitral valve were also observed, and the clefts in these patients originated from the leaflet tip and ran toward the root of the aorta. C- or S-shaped clefts were observed in 6 patients.

Two patients with mild MR did not undergo surgery, while 17 patients with moderate or moderate-severe MR underwent surgery. The intraoperative findings demonstrated that the location, shape, and degree of damage to the leaflet cleft were completely consistent with the preoperative diagnosis by 3D echocardiography (Figure 1). The maximum longitudinal diameters of the valve leaflet cleft, which were measured by RT-3DE and by direct measurements during surgery, were 12.02±2.12 and 13.01±2.45 mm, respectively, and the difference between these measurements was not statistically significant (P>0.05). Moreover, cardiac arrest during surgery results in no pressure inside the chambers. In this respect, comparing the width measured by RT-3DE with the width measured directly during surgery seems to have little significance. Of the 17 patients who underwent surgery, 11 patients underwent direct suture, 3 patients underwent annuloplasty due to expansion of the MVR annulus, and 3 patients underwent valve replacement because of severe damage to the valve leaflet around the cleft, presenting with thickening, stiffness and contracture. 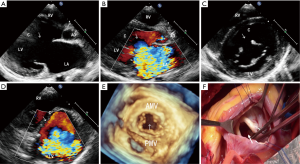 MVC is the most common cause of congenital mitral insufficiency (7,8), and direct suture and valvuloplasty are the major and effective treatments for MR caused by MVC (9,10). Therefore, it is important to determine the location and magnitude of the pathological damage due to MVC when selecting a surgical procedure for treatment. The use of 2D ultrasound to observe the 3D structure of the mitral valve leaflets and paravalvular tissues has considerable limitations, especially in observing the posterior leaflet of the mitral valve because it may have folds that can cause echo drop-out artifacts (11,12).

RT-3DE was used to show the 3D anatomical structure and spatial position of the mitral valve by rotating and cropping the 3D images with multiple levels and views and to dynamically display the structure, movement and function of the mitral valve leaflets (13,14). This study has shown that RT-3DE can directly display the position, shape, longitudinal diameter and width of the MVC as well as the spatial position between the chordae tendineae surrounding the MVC and the aortic valve. The intraoperative findings demonstrated that the location, shape, and degree of damage to the leaflet cleft were completely consistent with the preoperative diagnosis by RT-3DE. Three patients underwent valve replacement because of severe damage to the valve leaflet around the cleft, which presented with thickening, stiffness and contracture. Therefore, accurate localization of mitral valve leaflet clefts and evaluation of the magnitude of valve leaflet damage and regurgitation are key factors for successful surgeries (15-17).

In this study, the anterior leaflet cleft was located near the junction in 13 patients, which was consistent with previously published results in the literature, i.e., MVC occurs in either the A1 or A3 segment (18,19). This positioning is also associated with the embryonic development of the mitral valve (20). The anterior mitral leaflet originates in the endocardial cushion, while the posterior mitral leaflet originates in the myocardium of the left posterior ventricular wall. An MVC will develop when inappropriate fusion occurs at the junction of the anterior and posterior leaflets (21,22). Of the 19 patients in this study, only 5 out of the 15 patients who had ever undergone echocardiography were diagnosed with or suspected to have MVC, indicating that missing a diagnosis of MVC is common. The possible reasons for a missed diagnosis include the following numbered descriptions: (I) the short-axis view of the left ventricle at the level of the mitral valve is the optimal view to identify MVC. However, sonographers usually ignore this view, instead giving attention to assessing MR and thus overlooking changes in the morphology of the mitral valve (23); (II) it is easy to miss a diagnosis of MVC in patients without MR or with mild MR because some sonographers believe that MR must be present in patients with MVC. In this study, 2 patients were diagnosed with anterior mitral leaflet cleft by ultrasound but only mild MR was present.

Cardiac magnetic resonance imaging (MRI) and computed tomography (CT) are alternative noninvasive imaging modalities for the assessment of mitral valve diseases. MRI can provide good functional information about both valvular stenosis and regurgitation, and it allows for accurate assessment of ventricular function and relevant cardiac and vascular anatomy (24). However, defining the valve leaflet morphology is still difficult with MRI as the images are not usually acquired in real time but are instead reconstructed from data gathered over several heart cycles during a breath hold. Thus, the valve leaflets are not always easily observed, especially if there is an arrhythmia. CT has limited potential for the evaluation of valvular heart diseases due to the risk of radiation and contrast.

RT-3DE has some limitations (25). The 3D full-volume imaging mode does not collect images from the same cardiac cycle. Therefore, errors in imaging consistency may occur when the patient changes his or her position, takes deep breaths or has cardiac arrhythmia (26,27). Furthermore, the surface area of the volume transducer is large enough to affect the complete display of the entire structure due to the narrow intercostal space, which can limit the echo-wave through the observed window (28). Therefore, to obtain perfect 3D images, my personal experience is as follows: (I) one must optimize the gain, focus and maximum depth to obtain a clear 2D image based on 2D echocardiography; (II) the “pyramid-shaped” RT-3DE data should be obtained using the whole-volume imaging from the section of the apical 4-chamber view; (III) the RT-3DE images must be cut in a plane in the direction of the left atrium to the left ventricular to observe the real view of the mitral valve in the surgical field, while the unnecessary structures must be cut to reveal the mitral valve; and (IV) the patients should hold their breath while the images are taken.

In summary, RT-3DE is a reliable technique that has provided significant additional information to improve the accuracy of the detailed spatial analysis of mitral valve morphology and function. RT-3DE can serve as a useful alternative to 2D echocardiography. It is a simple and fast imaging technique from which detailed 3D images can be obtained to confirm a diagnosis of MVC. RT-3DE is considered to be an important preoperative test to provide more comprehensive information for selecting a surgical procedure for treatment. Therefore, RT-3DE has important clinical significance and broad prospects for application.

Ethical Statement: The review of these patients was approved by the Hospital Ethics Committee [(2016) Clinical Medicine Ethics Review No. 005] for human research, and written informed consent was obtained from the participants.