To deal with this technical problem, we designed an “in-vivo bioreactor” design defined as implanted TE airway substitutes perfused with intra-scaffold medium flow created by an extracorporeal portable pump system for in situ organ regeneration (9). In pilot tests, we demonstrated three main advantages of this design. Firstly, continuous medium perfusion keeps the pre-seeded cells alive before final revascularization; secondly, it functions as a cell re-seeding system whereby cells can be harvested and seeded into the implanted TE airway substitute through in-vivo bioreactor catheter similar to routine infusion; thirdly, various growth factors can be added into the perfusate as an efficient way to guarantee functional growth factors concentration inside the implanted TE airway (10,11).

In the clinical setting, lung cancer invading the airway is common with around 50% 5-year survival rate after a complete resection (12). TE airway application in lung cancer patients is controversial due to concerns of compromised regenerative process caused by adjuvant chemo-radiotherapy that is essential in multidisciplinary treatment of lung cancer. Here, we present a late stage lung cancer patient who underwent left main bronchus resection, left upper lobectomy, and left lower superior segment resection. A 5-cm long TE left bronchus with the in-vivo bioreactor design was implanted to bridge the left lower basal segmental bronchus to the carina. Revascularization and reepithelialization were confirmed 4 months postoperatively, and the patient underwent chemo-radiotherapy without complications related to the implanted TE substitute.

A 57-year-old man who complained of coughing and dyspnea was referred to Shanghai Chest Hospital in January 2015. Computed tomographic (CT) scan showed a centrally located mass at the left upper lobe extending to the left main bronchus with obstructive pneumonia. Positron emission tomographic (PET) indicated subcarinal lymph nodes metastasis. Brain magnetic resonance imaging (MRI) excluded brain metastasis. Bronchoscope discovered that the tumor had invaded the left main bronchus 2 cm distal to the carina and completely occluded the lumen (Figure 1). The biopsy confirmed squamous lung cancer, stage IIIA. His situation deteriorated quickly, and the patient suffered from left-sided entire lung atelectasis and hemoptysis. The oncology multidisciplinary team (MDT) decided that the patient was neither suitable for chemotherapy nor radiotherapy. MDT informed the patient that without any treatment his life expectancy was less than 3 months and surgery remained the only choice. Lung function test showed FEV1 1.88 64% which indicates high risk for left pneumonectomy. The patient refused left pneumonectomy in fear of poor quality of life postoperatively. On February 5th, 2015, approved by Shanghai Chest Hospital Ethics Committees and with the patient’s written informed consent, we decided to perform salvage surgery and used the TE airway substitute to preserve the left lower lobe when necessary. 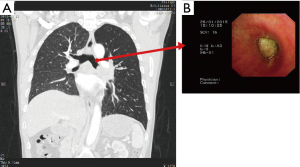 We chose porcine acellularized dermis matrix (ADM) (Unitrump Biotech, Shanghai, China) as the biodegradable scaffold. A nitinol stent (MicroApproach Biotech, Shenzhen, China), 5 cm long and 2 cm in diameter, was enveloped between two layers of ADM to provide laterally rigid and longitudinally flexible characteristics to TE airway substitute. At the beginning of the operation, a 20-cm long, 0.5-cm wide skin strip along the chest incision was harvested. The skin was then cut into small pieces and dissociated into single cell suspension using the GentleMACSTM Dissociator (Miltenyi Biotec, Cologne, Germany). The cell suspension, mainly keratinocytes, was seeded onto the inner surface of the TE airway substitute 1 hour before the implantation (Figure 2). 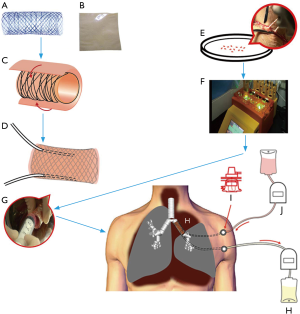 Anesthesia and thoracotomy were performed as per routine. The left upper lobe, lower superior segment, and left main bronchus were resected with negative margins at both bronchus sections. The 5 cm long TE left bronchus substitute was implanted to bridge the left lower basal segmental bronchus to the carina. Two PORT-A-CATH (Smiths Medical, London, UK) catheters were inserted into the TE airway substitute between the two ADM layers. The ends of the catheters were pulled out of the thorax and connected to two ports embedded subcutaneously on the left side of chest wall (Figure 2). The two anastomoses were then covered with intercostal muscle flap. No air leakage was found during lung inflation with saline filling the thorax. We finally performed lymphadenectomy before closing the chest.

Right after the operation two infusion sets, controlled by two ambulatory infusion peristaltic pumps respectively (Ace Medical Co. Ltd., Seoul, Korea), were connected to the subcutaneous ports. One pump delivered Ringer’s solution with 100 ug/mL gentamicin continuously into the TE substitute while the other pump removed the waste. The speed of both pumps was adjusted to 10 mL/hour.

The patient was transferred to the ICU after the operation and extubated the next morning. The patient breathed spontaneously and X-ray showed that the left basal segment was well inflated. The continuous Ringer’s-gentamicin perfusion lasted for 1 month. On the third postoperative day, we harvested 20 cc blood and isolated total nucleated cells (TNCs) with Res-QTM 60 BMC (Cesca Therapeutics Inc., Rancho Cordova, CA, USA). The TNCs (0.9–1.3×108) were injected directly into the implanted TE substitute through the PORT-A-CATH system. Perfusion was paused for 2 hours for TNCs to adhere to the scaffold. The TNCs injection was performed twice a week, namely on every Monday and Thursday lasting for 1 month.

The multiplex ELISAs were performed according to the manufacturer’s instructions. Briefly, 50 µL calibration standards or samples were applied to the ELISA plates, which were pre-washed and dried using absorbent paper. After a 2-hour incubation at room temperature on a horizontal orbital micro-plate shaker at 300 rpm and a thorough wash using wash buffer, 50 µL biotinylated antibody reagent was applied to each well of the ELISA plate and incubated for an additional 30 minutes using the same condition. Then, these plates were washed four more times using wash buffer. Streptavidin-HRP reagent (50 µL) was added to each well and incubated for 30 minutes at room temperature at 200 rpm before processing to be imaged using the Cira CCD imaging system and data analyzed using the Cirasoft array analyst software.

The patient recovered uneventfully and was transferred to the normal ward 1 week after the operation. He continued with rehabilitation and spirometry showed 10% lung function improvement versus the preoperative baseline. The patient was discharged 1 month after the surgery and was followed up in outpatient department.

Airway reconstruction remains a challenge mainly due to two obstacles (13,14). First, the airway is open to the air full of bacteria that invade and grow in the substitute much faster than normal cells do. Any prosthesis with perfect biocompatibility will also make it susceptible to bacterial infection that might lead to lethal pneumonia and stimulate granulation tissue overgrowth obstructing the airway (15). Second, the trachea and bronchus are supplied with a network of small vessels inaccessible to direct revascularization through vessel anastomosis. Animal studies have demonstrated that even immediate autologous orthotropic trachea replacement longer than 2 cm is bound to fail, despite the fact that the fresh autograft substitute is far more physiological than any possible tracheal substitute (16).

The tissue engineering airway reconstruction technique also has to overcome these two obstacles. In our in-vivo bioreactor case, infection was controlled by a continuous Ringer’s-gentamicin perfusion inside the implanted TE trachea substitute. We hypothesis that it might maintain temporary survival of pre-seeded keratinocytes that might function temporary as the epithelial layer to prevent bacterial invasion and control granulation tissue regeneration. Without a suitable monitoring method, our results did not show direct evidence of keratinocyte survival and function. A successful revascularization and reepithelialization process without infection or granulation tissue overgrowth indicates the role of pre-seeded keratinocyte.

In-vivo bioreactor design also realized repeated cell seeding after TE substitute implantation. The traditional tissue engineering technique was composed of two absolutely separated stages. The first stage is in-vitro substitute 3D culture that is often realized in various kinds of bioreactors mimicking the in vivo regenerative niche (17). Ironically, our knowledge of tissue regeneration was too limited to prevent cell dedifferentiation in vitro (18). The next stage is regarded as the TE substitute in-vivo regeneration phase after implantation. During this stage, implanted TE substitute will go through regenerative and revascularization processes to become compatible to the recipient. The final regenerated tissue proved to be a hybrid of pre-seeded cells and in situ regenerative cells (19). This fact challenges the necessity to create a perfect TE substitute with various kinds of cells to maintain the 3D organization associated with normal organ structure. It might be more efficient and feasible to implant cells repeatedly together with various growth factors to take advantage of and even boost the nature regenerative capability. In our case, we use in-vivo bioreactor design to combine the two stages and treat the recipient himself as a bioreactor for his own TE left main bronchus reconstruction. Previous studies proved the effect of bone marrow stromal cells (BMSCs) in TE airway reconstruction, either harvested from bone marrow or periphery blood (20). In our study we choose periphery blood originated BMSC, considering that it is much more easier to collect repeatedly. We did not try to isolate and proliferate BMSCs in vitro with the concern of limited numbers and quickly dedifferentiation. Instead, we use TNCs with the view to creating synergy amongst them. Various angiogenesis growth factors were found in the perfusate waste. Since we use Ringer’s-gentamicin without any growth factor supplements as inlet perfusate, these angiogenesis growth factors should be mainly secreted by re-seeded cells in the ischemia niche of implanted TE trachea substitute. The secretion of growth factors is a circumstantial evidence of re-seeded cell’s contribution to the regeneration of TE trachea substitute.

In lung cancer treatment, lobectomy provides lower postoperative morbidity, lower mortality and better survival results than pneumonectomy for stage AIII patients (21). The lobectomy patients recover quickly and are able to undergo adjuvant chemo-radiotherapy, which is often not tolerated by pneumonectomy patients. For TE airway substitute to be widely applied in lung cancer treatment, evidence must be produced that it does not undermine adjuvant chemo-radiotherapy treatment. Our case is the first TE substitute implantation patient who survived chemo-radiotherapy. This fact indicates a complete left main bronchus regeneration perfectly integrated to normal airway tissue.

Our work proves the possibility of in-vivo bioreactor design to be used in airway reconstruction. It modified the traditional TE technique by integrating the in-vitro and in-vivo stages and treating the recipient as a bioreactor of his own TE airway regeneration. To the best of our knowledge, this is the first report of a TE airway patient tolerating chemo-radiotherapy.

Funding: This work was supported by the National Natural Science Foundation of China (grant numbers 81371702, 2014); and the Chinese Ministry of Science and Technology Sino-Swiss International Collaboration project (grant numbers DFG31320, 2012).

Ethical Statement: The study was approved by Shanghai Chest Hospital Ethics Committees of No. KS1471 and written informed consent was obtained from all patients.