A 65-year-old male was referred to our institution with severe MR 10 years after anterior mitral leaflet repair using CV-5 PTFE neochordae and mitral annuloplasty with a posterior annuloplasty band (Medtronic Inc., Minneapolis, MN, USA). He recently presented with symptoms of progressively worsening dyspnea on exertion. Echocardiography showed left ventricular ejection fraction of 61%, severe MR with a vena contracta of 8.3 mm, a flail anterior leaflet, and MV area of 1.33 cm2 (Figure 1). The patient underwent reoperative MV surgery. Of note, last echocardiogram preceding to the one described above was obtained 7 years prior to the current presentation for a routine surveillance and showed intact MV coaptations, and thus, the failure of the chord is estimated to have occurred between 7 years following the initial repair and the current presentation. 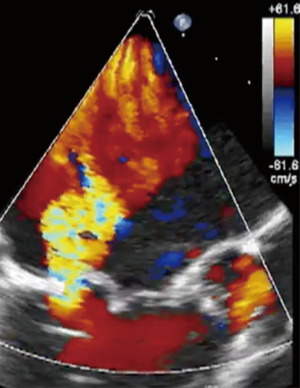 In the operating room, the chest was re-entered via a re-sternotomy. Cardiopulmonary bypass was instituted via aortic and bicaval cannulation. The heart was arrested with antegrade and retrograde del Nido cardioplegia. The previously implanted 63 mm annuloplasty band was incompletely endothelialized. While the band was anchored firmly at the right trigone, it was approximately 2 cm short of the left trigone. The GORE-TEX neochordae inserted at the A2 scallop had ruptured (Figure 2) in the middle. The insertion on the leaflet and papillary muscle remained intact. A previously used pledget remained secured on the papillary muscle. A native chord adjacent to the ruptured neochord had also ruptured. The annuloplasty band was explanted (Figure 3). We initially repaired the valve with two sets of GORE-TEX neochordae and a 28-mm Physio II annuloplasty ring (Edwards Lifesciences, Irvine, CA, USA). Upon weaning from cardiopulmonary bypass, there was greater than mild residual MR arising from the retracted posterior leaflet. Subsequently, the anterior leaflet was resected and a 27-mm Mosaic valve (Medtronic Inc., Minneapolis, MN, USA) was implanted. The postoperative course was uneventful and he was discharged on the 4th postoperative day. 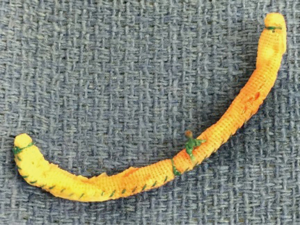 Figure 3 Explanted posterior annuloplasty band that was incompletely endothelialized. One end was anchored at the right trigone but the other end was anchored 2 cm short from the left trigone.

Chordal replacement with PTFE sutures was first introduced in the late 1980s and has since gained widespread acceptance. Excellent long-term durability of this repair technique has recently been reported by David and associates (1). In the setting of minimally invasive MV repair, some surgeons prefer the use of neochordae, as it is technically easier compared to resectional techniques (3). Extremely rare cases of neochordal rupture have been reported at various time points following MV repair, ranging from 2 months to 14 years (2-4). The suspected etiology of these ruptures include calcification of the neochordae, intraoperative trauma to the suture material, and mechanical break due to intracardiac tension that exceeds the strength of the PTFE material.

Castillo et al. described a case of neochordal rupture 4 months after the initial repair, with electron microscopic analysis demonstrating deterioration of the PTFE suture material due to tractional and frictional forces (3). The authors had utilized the loop-in-loop technique, and frictional component of the tear was postulated to have occurred due to friction between these two loops.

In our patient, the excised neochord appeared well endothelialized and did not show any gross evidence of infection or calcification. Considering that the posterior annuloplasty band was malpositioned and did not encompass the trigone-to-trigone circumference of the annulus completely, we postulate that this may have resulted in disproportionate tension on the artificial chordae, thus predisposing them to rupture. The observation of a torn native primary chord adjacent to the ruptured neochordae further supports our hypothesis that maldistribution of intracardiac tensile forces was the likely mechanism of failure. Of note, the failure load of PTFE material has been demonstrated to be >0.83 kg (5), and thus, intracardiac tensile force alone would be unlikely to be the sole driving force of the rupture.

Techniques to minimize the risk include use of multiple neo-chords, support with native chordal transposition, leaflet resection or edge-to edge sutures, care not to place neo-chords so that they cross the midline, minimizing tension with correct sizing, and implantation of remodeling annuloplasty rings.

Although exceedingly rare, artificial chordal rupture is a serious complication, which may occur even many years after MV repair using neochordae. This case highlights the importance of long-term clinical and echocardiographic surveillance in detecting late complications associated with this technique.