Cardiac rhabdomyoma, a type of benign myocardial tumor, is regarded as the most common fetal cardiac tumor. However, compared to other soft-tissue tumors, rhabdomyoma is rare (1). Rhabdomyomas are strongly associated with tuberous sclerosis, and are usually found before birth or during the first year of life (2,3). The incidence of cardiac rhabdomyoma is 0.02–0.08% in live-born infants and 0.12% in prenatal reviews across the world (4). Although most of rhabdomyomas have a natural history of regression without any interventions (5), the positioning within critical areas in the heart can result in lethal arrhythmias and chamber obstruction (6). Therefore, surgical removal may be a preferred option when the tumor has caused symptoms or an obstruction. Here, we present a case of successful removal of a large right ventricular rhabdomyoma, which obstructed the right ventricular outflow tract (RVOT) and involved the pulmonary valve annulus, using on-pump beating heart technique under the guidance of transesophageal echocardiography (TEE).

A 5-month-old female child weighed 7.1 kg was referred to our hospital because of cardiac neoplasm and obstruction of the RVOT diagnosed 3 weeks ago. There was neither a family history nor signs suggesting tuberous sclerosis. The patient presented with a systolic murmur (graded 3/6) with a palpable thrill, no cyanosis, and no edema. Preoperative transthoracic echocardiography (TTE) confirmed there was a large mobile 10×10 mm2 mass attached to RVOT, the mass was prolapsing into the pulmonary valve orifice during systole causing an obstruction of the RVOT, and a severe gradient (maximum 89 mmHg) was measured in the RVOT. A magnetic resonance imaging (MRI) revealed the mass was about 13×15 mm2 and slightly hypointense on T2-weighted imaging (Figure 1A, B). Other exams showed no significant abnormalities. Thus, surgical resection of tumor was planned. 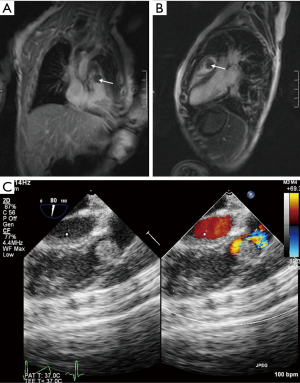 Median sternotomy was made to expose the heart and the CPB was established through the ascending aorta and the right atrium. However, the CPB was started without cardioplegia, and a vertical incision of the RVOT was performed on the beating heart. Direct inspection revealed the tumor was attached to RVOT and invaded the pulmonary valve annulus, consistent with preoperative TEE finding. Then the 13×15 mm2 large tumor was meticulously removed (Figure 2), along with the repair of the involved pulmonary valve annulus by bovine pericardial patch. The patient was weaned from cardiopulmonary bypass (CPB) and transferred to the intensive care unit. The CPB time was 59 minutes. There were no complications following the operation. The postoperative TEE Doppler echocardiography showed a free RVOT without any gradient and mild pulmonary valve regurgitation. 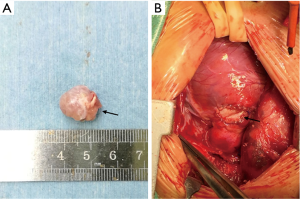 Figure 2 Intraoperative images. (A) The tumor was totally resected; (B) the incision (arrow) of the right ventricule.

Postoperative pathologic examination revealed the diagnosis of rhabdomyoma. The patient had a good recovery and was discharged 6 days later. The pulmonary valve functioned well with mild regurgitation and no residual tumor was detected by TTE at 3-month follow-up.

Rhabdomyomas are frequently located in the left ventricle (7) and may cause sudden death in infants (8). It is widely accepted that rhabdomyomas tend to regress spontaneously (2). However, if the tumor has caused clinical symptoms, electrocardiogram abnormalities or echocardiographic impairment, surgical interventions should be advocated (9). Specifically, patients with left or RVOT obstruction or refractory arrhythmias respond well to surgical interventions (1). It is reported that most surgeries for pediatric cardiac tumors requires extracorporeal circulation (9) and cardioplegia (10). To the best of our knowledge, we reported here the first case of surgical removal of the rhabdomyoma obstructing the RVOT and involving pulmonary valve with on-pump beating heart technique. Besides, in our case, the intraoperative TEE provided valuable information and useful guidance for intraoperative decisions and evaluation.

Of note, in the present case, the excision of rhabdomyoma was undertaken on a beating heart. As well described, since the advent of CPB, cardioplegic arrest has been an essential component of most cardiac surgeries. The use of CPB with cardioplegic arrest offers a stopped heart for cardiac surgery, whereas, this technique also causes a period of myocardial ischemia-reperfusion and subsequent oxidative stress which can induce myocardial injury and ventricular dysfunction (11,12). Avoidance of the adverse consequences of cardioplegia has been the driving force behind the development of on-pump beating heart surgery (13). Although beating heart procedures is associated with less myocardial damage (13-15), heart motion and a less optimal surgical field of view can make procedure challenging and increases the risk of air embolism (16). Thus, the application of the on-pump beating heart procedure is still limited and currently depends on the attitude and experience of the surgeon performing the operation. In the present case, both preoperative MRI and echocardiography showed the tumor was superficial with intact capsule. Considering that the tumor is very likely to be removed quickly and completely, and the risk of intraoperative tumor rupture is low, the surgery was performed under on-pump beating heart to avoid potential side effects of cardioplegic arrest. In comparison with TTE, TEE offers better sound transmission and more windows, which allows TEE to detect more valuable information. Thus, the utility of intraoperative TEE is able to identify new pathologic findings, assess surgery procedure, and consequently influence surgical decisions in cardiac surgeries (17). In addition, valvular repair under the guidance of TEE is also associated with a higher initial successful rate and better long-term results (18). In our case, intraoperative TEE revealed the tumor had involved the pulmonary valve annulus, omitted by the preoperative TTE examinations. Based on this finding, the surgery was modified without any delay and the tumor was precisely and radically removed with minimal myocardial injury.

In our case, we think that the excision of rhabdomyoma under the guidance of TEE on the beating heart is an adoptable technique which can lead to a complete removal with minimal myocardial injury. On-pump beating heart technique may avoid side effects associated with cardioplegic arrest and reduce ischemia-reperfusion injury. Additionally, TEE provides a very useful tool in perioperative decisions and evaluation. In conclusion, the use of on-pump beating heart technique and intraoperative TEE scan may be a good choice for tumor resection in certain patients and may lead to better outcomes.

Funding: This work was supported by the Sichuan Provincial Scientific Grant (2017SZ0110) and National Natural Science Foundation of China (81600006).

Informed Consent: Written informed consent was obtained from the patient’s parents for publication of this manuscript and any accompanying images.