Airway stenoses arise as complications of many benign or malignant diseases and require emergent treatment (1). Thirty percentage of lung cancer patients present central airway obstruction; 35% of which die of asphyxia, hemoptysis and obstructive pneumonia (2). Stent implantation can relieve dyspnea symptoms immediately, improving the quality of a patient’s life. However, stents can only temporarily expand the airway. They cannot fundamentally inhibit tumor growth.

In recent years, targeted therapy has provided new hope for lung cancer patients with driver gene mutations, offering a more rapid response and less risk of toxicity compared with chemotherapy. Samples that are rebiopsied have the possibility to be more suitable for molecular detection than the initial diagnostic specimens and rebiopsy can exclude the possibility of a false-negative initial molecular testing result (3).

A 50-year-old male never-smoker was admitted to our respiratory intensive care unit (RICU) due to a week-long history of severe cough and progressive dyspnea on Dec 25th, 2015 (time course of the disease, Day 0, D0). He was diagnosed with stage IV adenocarcinoma of the right lower lobe with a negative EGFR gene mutation and a weakly positive ALK gene fusion before chemotherapies in another hospital. His biopsy specimen was acquired by TBNA and ALK status was detected by means of Ventana immunohistochemistry (IHC). He had received five cycles of combination chemotherapies containing carboplatin and pemetrexed and three cycles of combination chemotherapies containing gemcitabine and nedaplatin in that hospital. On arrival (D0), he was in respiratory distress with a respiratory rate of 28 bpm and oxygen saturation of 88–89% without oxygen inhalation. Physical examination was remarkable for scattered rhonchi and decreased breath sounds over both the lung fields. His performance status (PS) was grade 4 (Zubrod-ECOG-WHO score). A chest CT scan at the local hospital showed that the primary lesion had become lager, exacerbating both left and right main bronchial stenoses.

Six days later, on D6, he underwent interventional therapy through flexible bronchoscope (FB) (Figure 1). We observed a large new lesion in the carina which was a typical aspect of the invasion of the two main stems bronchi from the mediastinum by the invasion of International Association for the Study of Lung Cancer (IASLC) lymph node station 7. The right main bronchus was completely occluded. We used argon plasma coagulation (APC) to treat the bleeding in the right main bronchus and rebiopsied the neoplasm in the left main bronchus. The neoplasm was then taken for pathologic examination and mutational analyses were completed for EGFR, ALK and ROS1 genes. On D10, under local anaesthesia, he was examined by FB again. We could see the left main bronchial stenosis was slightly relieved while right main bronchus was still obstructed by tumor tissue. We inserted a stent in the left main bronchus through the work way of FB and under its direct vision. When the airway stent was released, we adjusted its position with biopsy forceps and then dilated the airway with a balloon catheter. At last, the stent opened completely (Figure 2A-C). The stent was individually designed according to the patient’s chest CT and bronchoscope measurement to have a length of 30 mm and a diameter of 12 mm. After stent implantation, his dyspnea was relieved immediately, his dyspnea index dropped from level IV to level I (4) and his pulse oxygen saturation (SPO2) rose from 88% under 7 L/min flow oxygen inhalation to 95% without oxygen inhalation after examination. 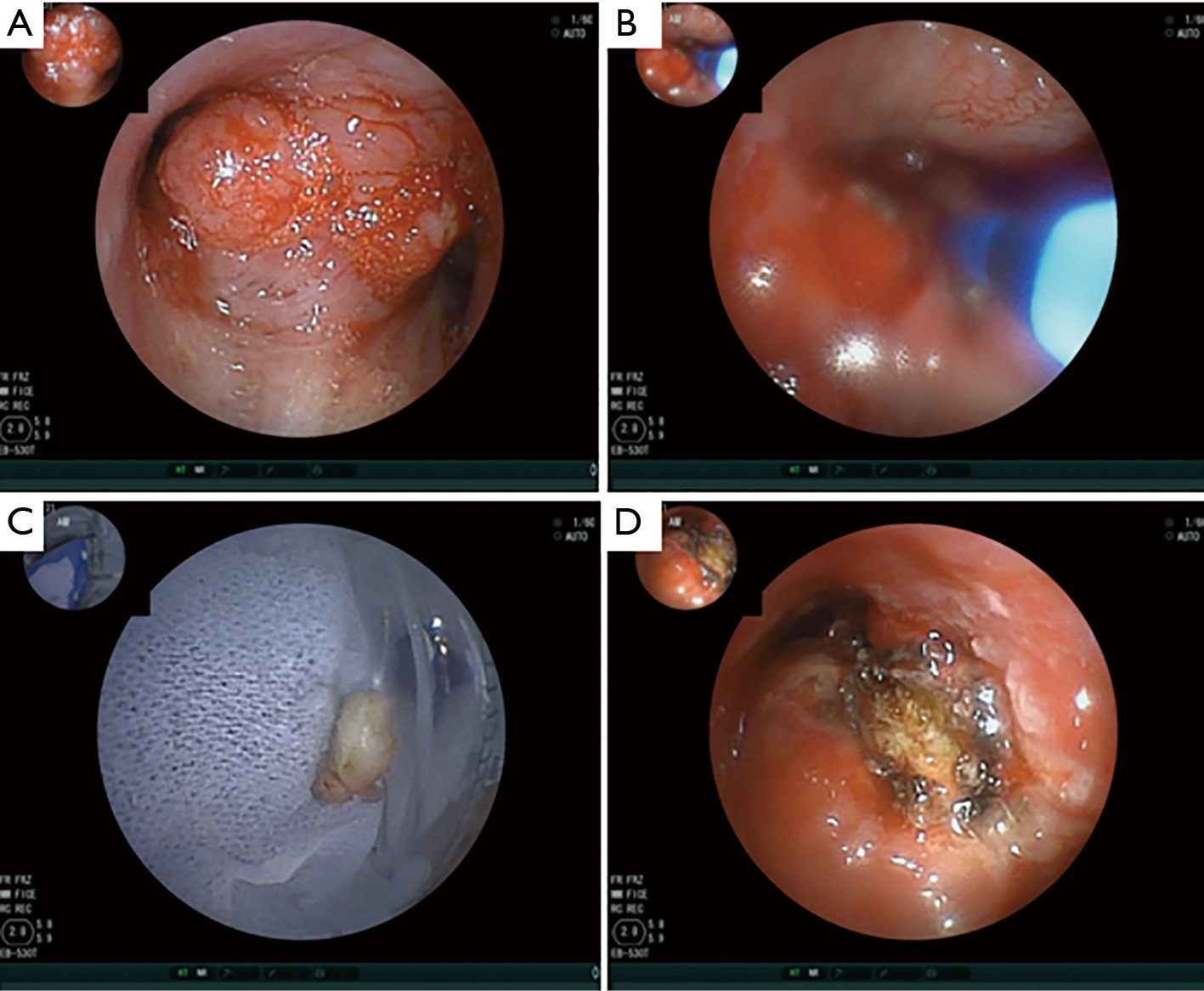 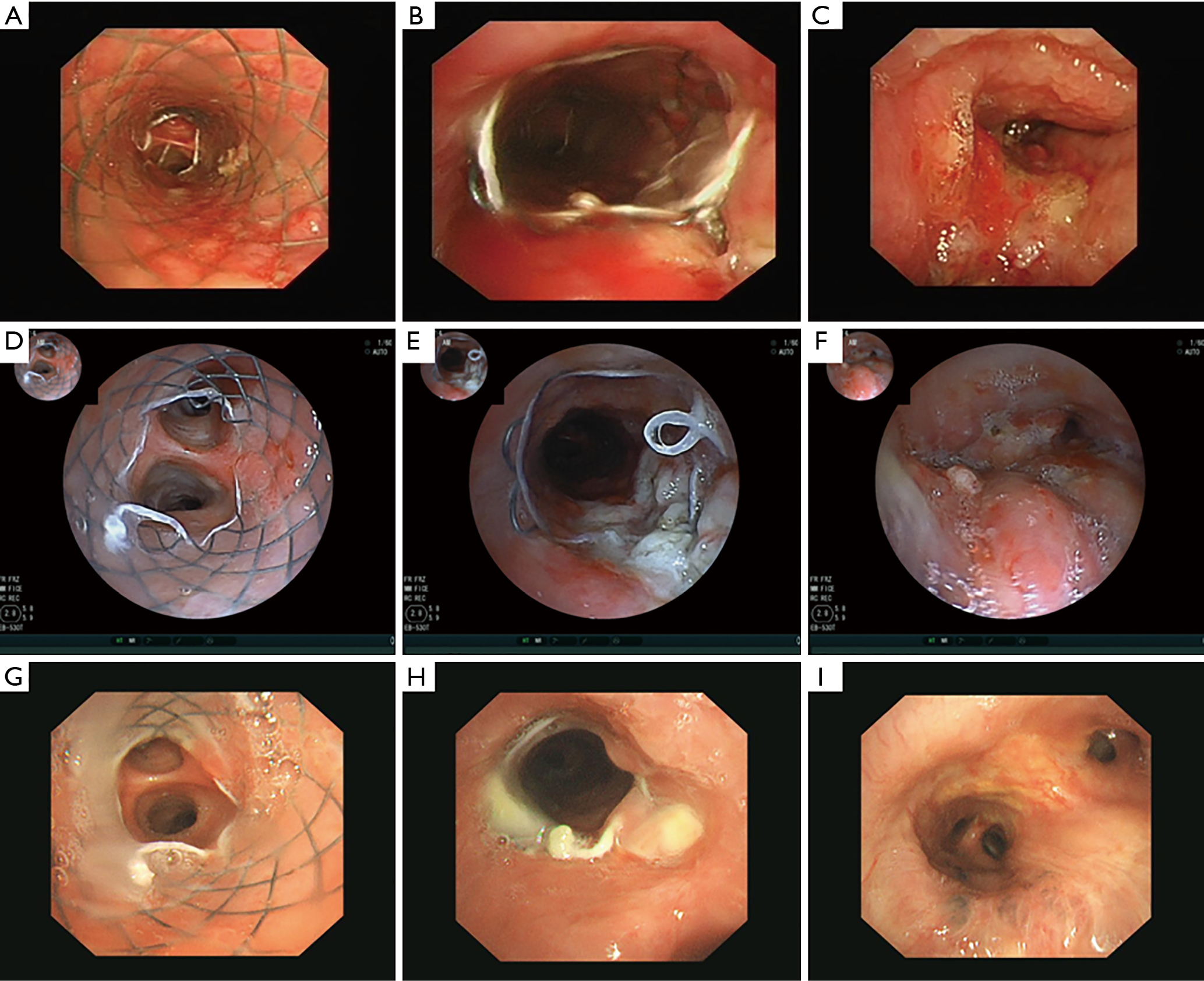 On D17, he was found to have an ALK fusion gene at site v3a/v3b by means of real-time quantitative polymerase chain reaction (qPCR) using the sample acquired from rebiopsy. He began to receive crizotinib therapy at a dose of 250 mg two times a day administered orally. On D20, 3 days after targeted therapy, he was examined by FB (Figure 2D-F) which showed the stent was opened well in its position and an opening began to appear in the right main bronchus. We cleaned away the granulation tissue at the opening of the stent and used APC to cauterize it. On D59, 42 days after targeted therapy, the FB showed the stent was well in its position and a small amount of granulation tissue had grown on it. The right main bronchial mucosa was integrated and the lumen completely recovered to normal (Figure 2G-I). He underwent a chest CT scan (Figure 3A-C) on the first day of crizotinib therapy which showed a mass in the right lower lobe with metastasis to the right lung and left lower lobe of the lung. On D52, 35 days after targeted therapy, this patient had another chest CT scan (Figure 3D-F) which showed normalization of both the left and right main bronchi lumen and significant reduction of the lesions in the right lung. 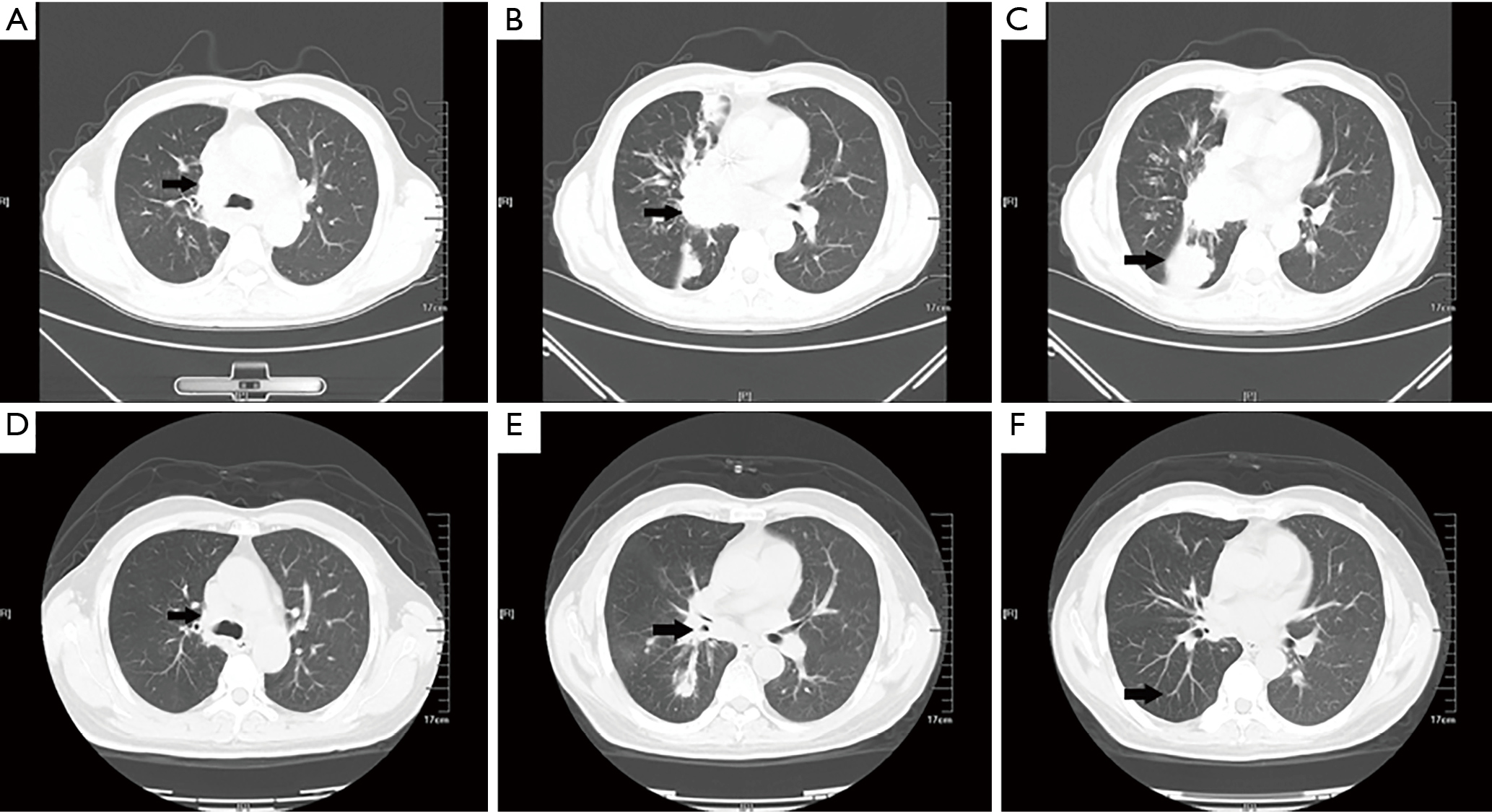 Airway stenosis is a serious complication of various kinds of advanced neck and thoracic tumors invading the central airway (5). It presents as progressive dyspnea, severe cough, recurrent pulmonary infection combined with hypoxia and so on. Usually, resection and reconstruction of the trachea is the main choice of treatment. However, this procedure can be impossible when the stenosis caused by a mass is long and complex. Besides, many patients with malignant central airway stenosis are poor surgical candidates as they can’t meet the basic physiologic or oncologic criteria. Optimal methods for patients with unresectable malignant airway disease may include the use of radiation therapy, laser therapy, APC, electrocautery, tracheostomy, bronchoscopic resection, T-tubes, cryotherapy, and airway stents. Airway stents offer minimally invasive palliative therapy for patients with unresectable malignant central airway stenosis (6). Additionally, airway stenting can relieve central airway stenosis acutely and form a bridge until other therapy is effective. In this case we presented, the left and right main bronchi were almost completely blocked. The patient’s obstructive symptoms were immediately relieved after a stent was implanted.

In Europe and in many others countries, a rigid bronchoscope is mandatory to core out bulky tumors in central airways to assure a quick resection under safe conditions and to insert stents. Rigid bronchoscopes have not been widely used in our country; our FB treatment and stent implantation system can treat complex airway diseases effectively. We used FB during the procedure as it was less expensive and used under local anesthesia, decreasing procedure time and general anaesthesia-related complications. We inserted a stent through the work way of FB. The direct vision provided by FB allows for adequate sight of the path and decreases the incidence rate of airway trauma. To ensure safety, the entire procedure was completed in the operating room in order to establish an artificial airway and mechanical ventilation in case of complications such as bleeding. APC was used to rebiopsy the neoplasm in the left main bronchus and APC can also treat bleeding.

However, tracheal stent implantation is only a palliative treatment. Although a stent can relieve symptoms temporarily, the rapid in-growth of cancer leads to reconstruction (7). We suggest that patients should be actively treated with antitumor therapy to improve quality of life and prolong survival time after receiving stent implantation. Allison (8) reported that high-dose-rate brachytherapy in combination with stenting was successful in lung cancer patients with endobronchial recurrence. However, there were few successful cases reporting stenting in combination with targeted therapy for stenoses caused by lung cancer.

The patient in the case we presented was confirmed to have an ALK fusion gene guided by rebiopsy and experienced a rapid response after crizotinib therapy. Crizotinib is a first generation ALK tyrosine kinase inhibitor. Niu (9) reported that Asian lung cancer patients treated with crizotinib may have lower toxicity and higher efficacy compared with other ethnicities. Recently, the need for driver gene detection in non-small-cell lung cancer (NSCLC) patients is increasing because the therapeutic response of conventional chemotherapy for NSCLC is unevenly limited, with 17–22% response rates and with 7–8 months median survival (10). Tissue rebiopsy provides further therapeutic options for advanced lung cancer patients. Our patient’s first remaining TBNA specimen had insufficient residual tumor to permit molecular testing. The lack of DNA abundance would affect the results. In addition, the patient had received eight cycles of combination chemotherapies which might result in driving gene changes. Thus, we rebiopsied the bulky tumor in the left main bronchus to analyze the driver gene mutations in real time.

Our patient’s condition was extremely critical. Death caused by serious airway stenosis could occur at any time if the airway stent was not implanted urgently. Airway stenting results in rapid relief of symptoms and improves quality of life. What’s more, airway stenting gives time for adjuvant chemoradiotherapy to take effect, possibly leading to prolonged survival. The patient’s PS improved significantly after stenting and a good PS score was an independent predictor of prolonged overall survival prior to chemotherapy (11). Although combination chemotherapy is associated with clinical improvement in patients with advanced non-small cell lung cancer of poor PS (12), PS is less important to targeted therapy. Chemotherapy requires patient’s PS ≥2 while ESMO guidelines state that NSCLC patients with EGFR mutation and PS 3–4 may also be treated with an EGFR TKI (13). Bosch-Barrera (14) and Adam (15) reported that critical lung cancer patients in ICU treated with targeted agents can also get astonishing clinical benefits. Targeted therapy has higher efficacy compared with chemotherapy for patients who have driver gene mutations in key positions (9,16). Furthermore, targeted therapy can also have efficacy to patients who have failed the second-line chemotherapy. Airway stenting alone only played a role in relieving symptoms while stenting in combination with targeted therapy not only improved the patient’s status but also his prognosis. As mentioned above, it was amazing that almost all original lesions from this patient we reported became partial response and the invaded main bronchi recovered to normal after 35 days of crizotinib therapy.

Acute interventional stent therapy in combination with targeted therapy based on rebiopsy is a rational option for severe lung cancer patients who harbor driver gene mutations, severe airway stenoses who are unresponsive to chemotherapies.

The authors would like to thank Dr. Tuener Abbey (University of Pittsburg) for reviewing the manuscript and thank the Suzhou MicroDiag Biomedicine Co., Ltd. for molecular testing.

Funding: This work was supported by Jiangsu Provincial Special Program of Medical Science (BL2012023), and Clinical Medical Center of Suzhou.