An aberrant right subclavian artery originating from aortic arch was very rare. The reported incidence of such an aberrant varies from less than 1% to 2% (1-3). During normal embryo evolution, the proximal part of right subclavian artery develops from the right fourth primitive aortic arch and the distal from the seventh intersegmental artery (4-6). Formation of abnormal retroesophageal subclavian artery is hypothesized to be the result of the persistence of the intersegmental artery caused by the abnormal involution of the fourth right aortic arch (7,8). When performing video-assisted thoracoscopic esophagectomy, the area at the level above the aortic and in the space between the esophagus and the spine, is usually regarded as a safe area for dissection of upper segment of thoracic esophagus. However, an aberrant right subclavian artery may appear in this area and lead to disastrous complications. We reported a case of aberrant artery encountered during video-assisted thoracoscopic esophagectomy.

A 57-year-old male was presented to our department with progressive dysphagia for more than 3 months. Upper gastrointestinal endoscopy revealed an intraluminal esophageal neoplasm 23 cm distal to his incisor (Figure 1). Biopsy was performed and pathological diagnosis of squamous carcinoma was confirmed. After pre-operative preparation, a video-assisted thoracoscopic esophagectomy was performed through right thoracic approach under double luminal intro-tracheal incubation and general anesthesia. During dissection of upper segment of thoracic esophagus, an aberrant pulsing vessel was encountered the level above aortic arch and in the space between spine and esophagus. In order to investigate this aberrant vessel, the operation was converted to thoracotomy. We identified a retro-esophageal right subclavian artery in a diameter of 1.5 cm (Figure 2), which was thought to be the azygos vein according to a pre-operative enhanced chest CT scan (Figure 1). This artery originates from the aortic arch and parallels to the esophagus. Subsequent operative procedures were then safely performed, and this aberrant artery was kept intact. This patient was discharged on day 8 after operation. At 3 months follow-up, there was no incidence of morbidity. 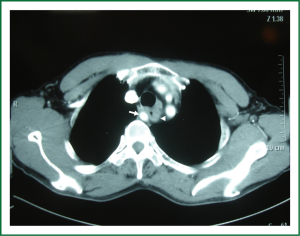 Figure 1. Pre-operative enhanced chest CT scan shows an esophageal tumor (arrow head) in the upper segment of the thoracic esophagus, and there is a vasculature abnormality at the level above the aortic arch and in the space between the esophagus and the spine (arrow). 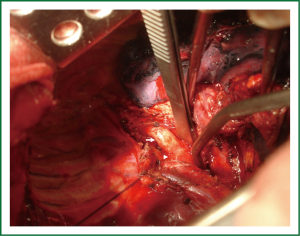 Figure 2. Thoracotomy has been converted and a retro-esophageal right subclavian artery (arrow) in a diameter of 1.5 cm is identified. This artery originates from the aortic arch (arrow head) and parallels to the esophagus.

Pre-operative diagnosis of aberrant right subclavian artery is important but very challenges. This abnormal entity caused no symptoms, although sometimes it may cause dysphagia lusoria and filling defect in barium swallowing when compressing esophagus (3,12,13). However, when associated with esophageal carcinoma, these findings are usually disguised or mixed with those of esophageal tumor, and the aberrant right subclavian artery was confused with azygous vein in preoperative imaging diagnosis (8). After reviewing the chest CT scans of these four patients (5,8,9), we found that the imaging of an enhanced abnormal vascular structure parallel to the esophagus at the level above aortic arch and in the space between esophagus and spine was a common characteristic, which might be used as a valuable diagnostic hint for surgeons having kept this aberrant entity in mind.