The incidence of cardiovascular disease is known to be higher in men than in women of similar age, and this gender difference is more prominent at a younger age (1) and is partly explained by protective effects of sex hormones (2). On the other hand, female patients with coronary artery disease have been reported to be more likely to have a worse cardiovascular risk factor profile (3,4).

Regarding patients with diabetes mellitus, it has also been shown that female patients have a higher cardiovascular risk than do male patients (5), and this may be in part explained by a more adverse cardiometabolic profile including visceral obesity, hypertension and dyslipidemia in women with diabetes (6-9). In a previous study, I demonstrated that female subjects with diabetes (n=569; mean age, 53.8±7.4 years) had a more adverse cardiometabolic profile than did age-matched male subjects with diabetes (n=1,138) (9). Waist-to-height ratio (WHtR), pulse pressure, LDL cholesterol, and log-transformed lipid accumulation product (LAP) were compared between men and women with and without diabetes who were 35 to 70 years old (Figure 1). In the non-diabetic group, LDL cholesterol and log-transformed LAP were higher in men than in women, while WHtR and pulse pressure were comparable in men and women. On the other hand, in the diabetic group, WHtR, pulse pressure, LDL cholesterol and log-transformed LAP were all higher in women than in men. Pulse pressure reflects arterial stiffness, which is a potent cardiovascular risk factor (10). Obesity is a major risk factor for type 2 diabetes, and dyslipidemia is known to be closely associated with diabetes. LAP, an index calculated by using levels of serum triglycerides and waist circumference, has been reported to be a good discriminator for diabetes (11). Therefore, female patients with diabetes had a more adverse profile of cardiovascular risk factors than did male patients, whereas women without diabetes had a better profile of risk factors than did men. Regarding the gender difference in cardiovascular risk factors, the above findings on diabetes agree with those of the previous studies on coronary artery disease (3,4). In the above study on diabetes, the subjects were 70 years old or younger and their ages were matched in men and women in the diabetic and non-diabetic groups (9), and thus the gender difference is not related to age. Information on education level of subjects was unfortunately not available, but all of the subjects were workers, and results for their annual health checkups at the workplaces were analyzed in the above study on diabetes (9). Therefore, it is unlikely that there is a great difference in education levels in male and female subjects with diabetes in the study. The ability to convert androgen to estrogen was reported to be impaired in women with type 2 diabetes, and this impairment is likely to be caused by attenuation of ovarian aromatase activity (12). Thus, protective actions of estrogen on cardiovascular health, including suppression of obesity and dyslipidemia, may be decreased in female patients with diabetes compared with those in non-diabetic women. However, the reason for a more adverse cardiovascular profile in female patients with diabetes than in male patients remains unknown. Type 2 diabetes has been shown to be more common in men than in women in many studies (5). Men develop diabetes at a lower body mass index and are more insulin-resistant (13). In a cross-sectional study of non-diabetic and diabetic men and women, advantages of women such as a better profile of risk factors and less insulin resistance than those in men were diminished in a diabetic state, and the interactions of gender and diabetes for diastolic blood pressure, tissue plasminogen, white blood cell count and coagulation factor VIII were attenuated after adjustment for waist circumference and HOMA-IR (14). Thus, it was thought that the greater adverse influence of diabetes on cardiovascular risk factors was, to some degree, explained by the greater increases in adiposity and insulin resistance associated with diabetes in women than in men. Therefore, the gender difference in cardiovascular risk factors in patients with diabetes may be at least partly explained by a higher risk factor burden (15): women who develop diabetes are more prone to have disadvantages in their backgrounds, such as obesity and insulin resistance, that deteriorate glucose tolerance. In addition, gender differences regarding diagnosis and therapy for diabetes, including later diagnosis, less diagnostic and therapeutic supports, and less attainment of therapeutic goals in women, have been suggested as reasons for gender differences in diabetic complications (16). 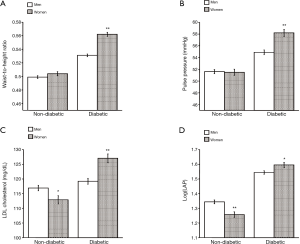