Urinothorax (UT), or accumulation of urine in the pleural space, is a very rare cause of pleural effusion (PE). Although some authors consider that the first case was described by France and Back in 1954 (1), for most, UT was first described by Corriere et al. in 1968, in two patients and reproduced in mongrel dogs after the obstruction of both ureters (2). Until January 2006, only 58 cases had been published (3), most being isolated cases and small series involving no more than four patients.

This systematic review employed a methodology based on the principles of the PRISMA study (Preferred Reporting Items for Systematic reviews and Meta-Analyses) (4). Because there are insufficient large series that respond to the needs of the study, the cases described in the literature were added using this methodology.

Deemed eligible for inclusion were all cases of any age published in any format, except abstracts of papers presented at conferences and editorials, reviews, or letters to the editor that did not document new cases.

The search strategy included several sources of free databases available by the year of publication, although the full text of the study had to be in English, French, Portuguese or Spanish. The literature search included the following electronic databases (online): Medline (through PubMed interface), Embase and Scopus. Searches were conducted between October 1 and October 31, 2016 for (ME Toubes, A Lama and L Valdés). The following search terms were adopted for each database: urinothorax OR urothorax.

In addition to the electronic data bases consulted, a manual search was performed of reference lists of the included articles. We included any studies fulfilling the above criteria, and then independently screened and assessed each article identifying those we considered potentially relevant. Studies were reviewed in three stages based on the tittle, abstract and then full text with consensus sought at each stage of review.

Data from selected studies were extracted electronically (Microsoft Excel 2010, Microsoft Corp., USA). The information extracted included: authors, data of publication, number of cases in the series, age, gender, presence of dyspnea, cough and fever, time between the cause that originated the PE and the intervention with thoracentesis, side and size of PE, existence of ascites, cause of UT, relationship between the side of the obstructive uropathy and the side of the PE, diagnostic criteria, smell of PF, characteristics of PE [red blood cells, total and percentage nucleated cell count, proteins, PF/serum (PF/S) protein ratio, lactate dehydrogenase (LDH), PF/S LDH ratio, characteristics of transudate or exudate according to Light’s criteria, cholesterol, glucose, PF/S glucose ratio, pH, PF/S creatinine, and carcinoembryonic antigen], culture of PF, treatments received and their response, complications and deaths.

Because the articles reviewed were mostly case descriptions, their quality was not assessed in relation to assessment of study type, internal validity, generalizability, heterogeneity, and precision.

Outcomes of interest were to know the patient demographic data; associated diseases; causes of UT, biochemical, microbiological and cytological characteristics of the PE, and the response to various treatments.

Due to the wide heterogeneity and descriptive nature of the studies, simple statistics (proportion, median and range) of each outcome of interest were calculated.

Seventy eight studies involving 88 patients were selected for review, spanning a period of 62 years. Figure 1 presents a flowchart showing a complete breakdown (2,5-24) of how (25-44) appropriate studies (45-64) were identified (65-81), corresponding to isolated case reports (between 1 and 4 cases per article). 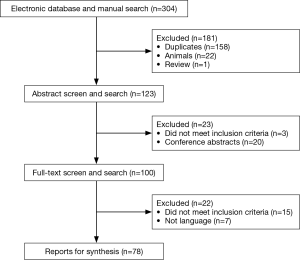 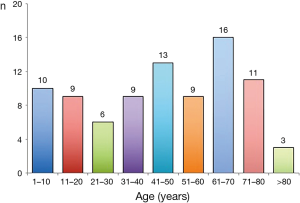 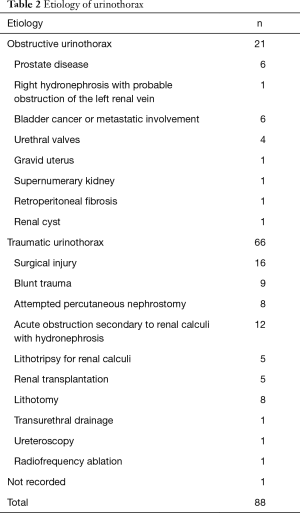 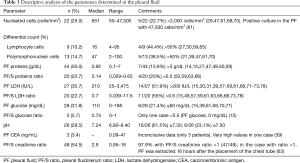 Many different therapeutic measures have been used to treat PE and its symptoms, with widely varying rates of success. Table 4 shows a summary of the most common measures (favorable: total or partial control of PE or its symptoms; unfavorable: no control of PE, recurrence or symptoms). Thoracentesis, either evacuating (3 cases) or repeated (7 cases), did not show favorable results in any case (6,19,23,27,33,38,43,65,73,76). When the only therapeutic measure applied in 5 patients was chest drainage, no improvement was observed (16,25,33,57,67), except in one case (81). Other forms of treatment used anecdotally, such as surgical drainage (10) or pleurodesis (16), were not effective. In three patients, decortication produced favorable results in all (16,25,61).

Better results were obtained when direct therapeutic measures were applied to treat the uropathy, either alone or associated with thoracentesis/thoracic drainage. Of the 38 patients who underwent uropathy treatment alone, only one (2.6%) showed an unfavorable response (48). In 39 patients, thoracentesis (6 cases) or a chest drain (33 patients) was added to uropathy treatment; in the former, the outcome was favorable in all 6 patients and in the latter, only 2 of 33 patients (6%) had unfavorable outcomes (12,61). Treatment of uropathy was varied and included, among others, nephrostomy (19 patients), nephrectomy (17), “double J” catheter (8), lithotripsy (3), urinary catheter (4), ureteroneocystostomy (2), prostatectomy (2), resection of the posterior urethral valve (2), surgical removal of calculus (2) and surgical repair of bladder rupture (2) and ureteral fistula (1). No direct treatment was applied in 4 patients; 2 with renal stone disease resolved spontaneously (28,39) and the other 2 died (38,48). Finally, the treatment applied in 10 patients was not documented (2,8,10,15,45,52,59,61,63,78).

Publications on UT involve isolated case reports (between 1 and 4 cases), so key issues such as clinical course, characteristics of PE or the most effective treatments are not well known. These questions were addressed using a systematic review of the literature relating to this disease since a recent previous revision does not include the characteristics of PE or its treatment (79).

UT is a rare form of PE which occurs by the accumulation of urine in the pleural space, as a result of a trauma or blockage of the urinary tract. The mechanism of urine transit has been much debated. One theory is that it ascends directly through anatomical defects of the diaphragm, but it seems more likely that the collection of urine migrates into the pleural space through diaphragmatic lymphatics due to increased retroperitoneal or intraperitoneal pressure caused by urinoma (21). In cases of traumatic origin, the disruption of urinary excretion pathways was associated with unilateral PE. In the absence of trauma, unilateral ureteral or kidney obstruction does not produce UT if the contralateral kidney’s function is preserved. Only obstruction of both ureters, the urethra, or the bladder, can divert the urine, causing ascites and subsequent UT. In patients with renal stones, if the obstruction is not bilateral, the most likely cause of UT is considered to be acute traumatic injury that occurs at the time.

In most cases, the diagnosis is based on demonstrating PE associated with obstructive or traumatic uropathy which resolves after treatment of the obstruction. It is not uncommon for the diagnosis of UT to be established without determining biochemical parameters such as PF/S creatinine ratio, pH or glucose levels. UT is a reversible disease when treatment is directed at correcting its primary cause, so early diagnosis and etiology is especially important.

The management of UT is not well defined to date. The results of this systematic review suggest that it should be based on treatment of the underlying uropathy, either alone or associated with thoracentesis/thoracic drainage. In the 77 patients who received one of these forms of treatment, 74 (96.1%) had a favorable outcome. By contrast, thoracentesis and chest drainage, without uropathy treatment, did not result in a favorable outcome in any of the 16 patients who only received these measures, except in one case (81). Decortication was used in 3 patients and the outcome was favorable in all (16,25,61). However, this approach was adopted mainly for the complications arising from the PE rather than as treatment for the UT itself. Uropathy treatment varies according to the root cause of the UT, and over 20 different measures have been described, ranging from simple urinary catheter (3 patients) to nephrectomy (17) through nephrostomy (19), lithotripsy (3), “double J” catheter (8) or corresponding surgical repair. Favorable outcomes in UT patients have also been described in cases without uropathy treatment after spontaneous resolution of renal stone obstruction (28,39).

Two patients with UT died: in the first it was decided not to perform any invasive measure since the patient had metastatic bladder cancer and the possibility of surviving surgery was limited (38), while the second had declining renal function and other causes (48).

Our review has certain limitations. The most important was the reliance on descriptions of case reports, instead of case series or comparative trials. Therefore, the evaluation of the quality of the reported literature could limit internal validity, generalizability, and accuracy. In addition, some articles highlight the clinical characteristics of the patients, while others stress diagnostic and therapeutic aspects. Due to the heterogeneity of the reported information, it is not possible to provide the details required, making it difficult to correctly classify some effusions or evaluate the response to a particular treatment. As in all rare disease, the publication bias would be another limitation to consider since the successfully treated cases or atypical cases are more likely to get published.

In summary, despite carrying out a systematic review, the available data are too few to draw firm conclusions. However, it seems that UT may appear at any age, is slightly more common in men, and its origin is usually traumatic. PE is generally unilateral and occupies over two thirds of the hemithorax. PF may be straw-colored or hematic and does not have a specific pattern or cellularity predominance. The PF/S creatinine ratio is almost always >1. Finally, our results indicate that the management of UT should include direct treatment of the underlying uropathy, with or without PE evacuation.