McKeown or Ivor Lewis totally minimally invasive esophagectomy for cancer of the esophagus and gastroesophageal junction: systematic review and meta-analysis

Similar to open esophagectomy, MIE can consist of transhiatal esophagectomy (8), McKeown esophagectomy (9) or Ivor Lewis esophagectomy (10), but Ivor Lewis or McKeown procedures are usually performed since they allow adequate thoracic lymph node dissection (11,12). In patients with esophageal tumors above the level of the carina, an Ivor Lewis procedure is unfeasible because it might compromise adequate resection margins. For patients with lower esophageal or gastroesophageal junction tumors, both McKeown and Ivor Lewis procedures are considered to be oncologically feasible. Supposed benefits of cervical anastomosis are that it is technically less challenging than totally minimally invasive intrathoracic anastomosis and that if an anastomotic leak occurs, it can be managed more easily than intrathoracic leakage. However, intrathoracic anastomosis after MIE is believed to be associated with a lower incidence of anastomotic leakage and better functional results.

Criteria for selecting studies for this review

Comparative cohort studies or randomized controlled trials that included patients undergoing HMIE or TMIE and that compared McKeown versus Ivor Lewis procedures were included. Exclusion criteria were: less than 10 patients in a treatment arm, unclear description of operative technique rendering classification into McKeown or Ivor Lewis procedures impossible and studies that contained more that 10% other procedures in one of the arms (i.e., minimally invasive transhiatal esophagectomy). VATS procedures and hand-assisted laparoscopic surgery (HALS) procedures were regarded as minimally invasive and were also included.

All references of studies were screened on title and abstract by two authors independently (BK and FvW). All studies that were not excluded in the screening stage were assessed in full text for eligibility. If discrepancies occurred, this was discussed in a meeting and if no consensus could be reached, another discussion meeting with a third author (CR) was held until consensus was reached. This process will be described in a flow chart according to the PRISMA statement (13).

All studies were independently assessed for methodological quality by BK and FvW using the Newcastle-Ottawa rating scale (14). Discrepancies were resolved in discussion. In case of persisting discrepancy, a meeting with a third author (CR) was held and discrepancies were discussed until consensus was reached.

Meta-analysis was performed if data on an outcome parameter was reported in at least two studies in a way that was compatible with meta-analysis. The Mantel-Haenszel method for dichotomous data was used, presented as relative risks (RR) with 95% confidence intervals (CIs). The inverse variance method was used for meta-analysis of continuous data; results are presented as standardized mean difference (SMD) with 95% CIs. The statistical heterogeneity was assessed with I2. In the absence of substantial statistical heterogeneity [I2 ≤50% (15)] a fixed-effect model was used. In case of substantial heterogeneity (I2 >50%), a random-effects model was used. Statistical analyses were performed with Review Manager (version 5.3).

A summary of the screening and selection process according to PRISMA (13) is shown in Figure 1. No studies comparing McKeown versus Ivor Lewis procedure in patients undergoing HMIE were identified. Five studies with 1,681 patients undergoing TMIE were ultimately included for analysis (17-21). The characteristics of the included studies are summarized in Table 1. 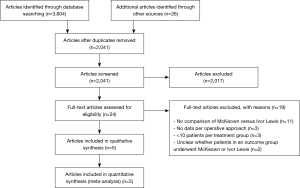 The results of the quality assessment of the included studies are shown in Table 2. There were no randomized controlled trials. Studies scored 6 or 7 stars out of 9 according to the Newcastle-Ottawa rating scale, corresponding to a moderate risk of bias. Four studies were retrospective cohort studies and one was a prospective cohort study. One study clearly stated that MIE Ivor Lewis procedures were predominantly performed in a more recent time period (19). This was not described for the other studies.

Considerable heterogeneity was found for the outcome parameters pulmonary complications (I2 =73%), intensive care length of stay (I2 =95%), examined lymph nodes (I2 =79%), operating time (I2 =99%) and blood loss (I2 =70%). For these parameters, a random effects model was used. No sensitivity analysis was performed because this was considered unfeasible with only 2 or 3 studies available for the outcome parameters with high heterogeneity.

The outcome parameters severe complications (CD ≥3), pneumonia, wound infection, reintervention, quality of life and costs were not reported in any of the included studies. The outcome parameters chyle leakage, reoperation, R0 resection rate were reported, but not enough data was available to perform meta-analysis.

For open esophagectomy, the anastomotic leakage incidence has been shown to be higher after cervical anastomosis compared to intrathoracic anastomosis in a meta-analysis of randomized controlled trials (23). However, the included RCTs were of moderate methodological quality and included limited numbers of patients. None of the studies included patients undergoing MIE and this is important, since especially the minimally invasive creation of an intrathoracic anastomosis is considered to be technically challenging and results of open surgery might not be applicable to TMIE. HMIE might combine the best of both worlds for the Ivor Lewis procedure because the technically challenging thoracoscopic creation of an intrathoracic anastomosis is avoided by performing a thoracotomy and pulmonary complications are reduced by performing laparoscopic gastric mobilization (4).

Minimally invasive Ivor Lewis esophagectomy was associated with a lower incidence of RLN trauma and less blood loss. The difference in the incidence of RLN trauma is consistent with the literature regarding open procedures (23) and is explained by avoiding a cervical dissection close to the RLN. This is important, since it has been shown that RLN trauma is associated with increased incidence of pulmonary complications, postoperative ventilation time, intensive care length of stay and hospital length of stay (24-26). The lower blood loss volume that was found in patients undergoing minimally invasive Ivor Lewis esophagectomy can be explained by omitting a third stage, the incision and the associated blood loss.

An interesting finding is that the hospital length of stay was shorter after minimally invasive Ivor Lewis esophagectomy than after minimally invasive McKeown esophagectomy, despite the fact that no differences in postoperative complications were observed between the groups. This may be explained by the fact that patients with intrathoracic anastomosis have a lower incidence of functional morbidity. In addition to a lower RLN trauma incidence, fewer swallowing problems and a lower incidence of benign anastomotic dilatations (27) might contribute to a shorter hospital length of stay. Further, prospective research and comparisons of other groups are needed in order to assess whether this significant difference in functional results after intrathoracic anastomosis can be confirmed. Another explanation is that the lower length of stay in the Ivor Lewis group might have been caused by performance of the minimally invasive Ivor Lewis procedure in a more recent era, with increased surgeon experience, increased expertise in postoperative management, increased use of enhanced recovery after surgery protocols and improved intensive care. However, only one of the included studies described this phenomenon (19). Therefore, it remains unknown to what extent this selection bias has influenced the results of the included studies.

Taking into account the limitations of the current evidence, it remains uncertain whether a McKeown or an Ivor Lewis should be preferred for MIE for patients in which both procedures are oncologically feasible. To answer this question, the ICAN randomized controlled trial is currently being conducted in the Netherlands and this trial randomizes 200 patients between TMIE McKeown and TMIE Ivor Lewis. In addition to postoperative morbidity and the severity of complications, this trial is also powered for finding differences in quality of life, functional results and cost-effectiveness (28).

Strengths of this study are the comprehensive search strategy and the fact that this is the first review comparing TMIE McKeown versus TMIE Ivor Lewis. Limitations are the heterogeneity of the included studies regarding definitions of outcome parameters, the moderate methodological quality and the retrospective character of the included studies. In addition, selection bias might have played a significant role, but it is unclear to what extent it is present in the included studies. More research is needed in order to determine whether McKeown or Ivor Lewis MIE should be preferred for patients in whom both procedures are feasible.