The formation of a left atrial (LA) thrombus after mitral valve (MV) surgery is a rare complication. This complication is associated with a high risk of devastating sequelae, with thromboembolic and mortality rates of 10.4% and 15.8% per year, respectively. Known predictors of thromboembolism include a mobile thrombus, thrombus diameter ≥1.5 cm, and a history of thromboembolism. Some authors advocate surgical removal, although anticoagulation can be considered for high-risk patients (1). We describe a case of a LA thrombus diagnosed 4 weeks after mitral and tricuspid valve repair, complicated by an embolic cerebral infarct. The patient subsequently suffered an intracranial hemorrhage (ICH) after initiation of anticoagulation. This thrombus was managed non-surgically and resolved after 3 months of Warfarin therapy.

The patient underwent successful MV repair consisting of paracommisural closure of the anterolateral commissure, mitral annuloplasty with a 32 mm Medtronic CG Future band (Medtronic, Minneapolis, MN), tricuspid annuloplasty with a 30 mm Edwards Lifesciences MC3 ring (Edwards Lifesciences, Irvine, CA), and coronary artery bypass grafting with grafts from the left internal mammary artery to left anterior descending artery and saphenous vein graft to the right coronary artery. The LA appendage was excluded internally with a 2-layered suture closure. His initial postoperative course was uneventful. Warfarin therapy was initiated in view of his AF and recent implantation of prosthetic annuloplasty rings. Predischarge echocardiography was unremarkable. He was discharged on the 7th postoperative day with an international normalized ratio (INR) of 1.96 (target INR 2 to 3).

Four weeks post-surgery, he suffered a transient loss of consciousness and was readmitted to hospital. Computed tomography (CT) scan of the brain showed a right caudate nucleus infarct (Figure 1). TTE showed a giant LA thrombus (Figures 2,3) measuring 5.6 cm × 3.6 cm. The patient was found to have a subtherapeutic INR of 1.2. In view of these findings, low-molecular weight Heparin (Enoxaparin 70 mg twice a day) was commenced immediately. Two days later, the patient experienced a severe occipital headache with no associated neurological deficits. Repeat CT of the brain showed an acute right occipital ICH (Figure 1). In consultation with a multidisciplinary team of neurologists and neurosurgeons, anticoagulation was discontinued immediately. After carefully considering the risks of further embolization from the giant LA thrombus against the high risk of worsening intracranial bleeding from systemic heparinization required for surgical thrombectomy, the patient opted for a non-operative approach. Serial brain imaging showed interval stability. As he remained well without neurological deficits, Warfarin was resumed and titrated to a therapeutic INR level of 2.2 prior to discharge. 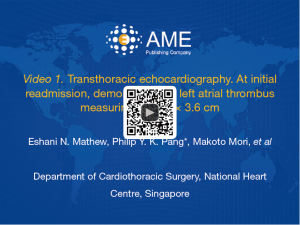 One month post-discharge, the patient remained well without further thromboembolic or bleeding complications. TTE showed a reduction in size of the LA thrombus to 2.4 cm × 1.7 cm (Figures 2,4). Interval imaging two months later showed complete resolution of the thrombus (Figures 2,5). Since then, he has remained well and remains on life-long Warfarin. 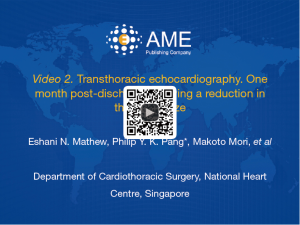 A LA thrombus may be associated with MV disease and AF. AF leads to the loss of organized atrial mechanical contraction with decreased flow within the LA, which increases the risk of thrombus formation. Less commonly, a LA thrombus can present as an early or late complication after MV surgery. TTE is a reliable diagnostic tool in this scenario (5,6). A LA thrombus may present with symptoms of heart failure, peripheral embolization, or sudden death due to acute obstruction of the MV. The occurrence of a giant LA thrombus during the early postoperative period is extremely rare, especially in the presence of anticoagulation therapy. Due to its potentially catastrophic consequences, some authors have advocated prompt surgical removal as definitive treatment, especially since the response to anticoagulation treatment alone may be unpredictable (1). Successful treatment with anticoagulation therapy alone has been reported in patients unsuitable for surgical removal (7,8).

The LA thrombus which occurred in our patient may have been partly precipitated by his persistent AF, especially in the setting of a newly implanted mitral annuloplasty ring. As his AF was longstanding and the LA was severely dilated (>6 cm in diameter), we opted against performing a concomitant maze procedure, in view of the limited success rate of achieving durable sinus rhythm in the presence of these poor prognostic factors (9).

The optimal timing for surgical thrombectomy, which requires systemic heparinization and cardiopulmonary bypass in patients with existing cerebral infarction or haemorrhage, remains controversial. Although surgical removal of a giant LA thrombus appears compelling, the risk of systemic heparinization to an activated clotting time of >480 sec may result in worsening intracranial bleeding and irreversible neurological damage. This risk may be reduced if interval stability is observed on serial brain imaging. In a recent study from Japan involving 30 patients with infective endocarditis complicated by ICH, valve surgery performed at a median interval between ICH onset and surgery of 22.5 days, was not associated with incidence of worsening ICH (10).

This report highlights a challenging clinical scenario and treatment dilemma. Careful consideration was given to the risk-benefit ratio of surgical thrombectomy versus the potential for further thromboembolic complications from a giant LA thrombus, as well as worsening ICH and further hemorrhagic events from continuing anticoagulation therapy. Being a rare complication, there is currently no available consensus on the optimal mode of treatment. Successful reports of both expectant management with anticoagulation and surgical thrombectomy have been described. Hence, the management plan should involve a multidisciplinary team of relevant specialists and be tailored for each patient.

The authors would like to thank Clara Zhang and Selena Chew for their editorial assistance.