Non-small cell lung cancer (NSCLC) is one of the leading courses of death in the world (1) and requires intensive treatment. Advanced stage NSCLC is defined by an associated existing metastatic and/or invasive lesion, in contrast to stage I NSCLC which has no metastasis (2). Since stage I NSCLC is a localized disease without metastasis, local therapy is indicated where surgery is the most common (3). Approximately 20% of patients experience relapse after undergoing complete resection of their stage I NSCLC (4). Relapse is caused by residual isolated tumor cells (ITCs) that remain in the body after surgery. While ITCs may be present before surgery, it has been speculated that the process of surgery may trigger the development of circulating tumor cells (CTCs) which cause the development of some ITCs. Up to now, the dislodgement of CTC has been reported among surgical cases of breast cancer (5) and lung cancer (6). However, there is no multicenter prospective study with a goal of determining whether surgical manipulation causes the dislodgement of CTC. Therefore, we conducted this investigation to evaluate the rate of occurrence of CTCs before and after surgery in a multicenter prospective setting.

This multi-center, prospective controlled study was approved by the Institutional Ethics Review Board (Teikyo University Review Board 15-010), and the study was registered in the University Hospital Medical Information Network (UMIN000018602). All participants provided written informed consent prior to the start of the study.

This study was designed to include cT1b–2 (2–7 cm) N0M0 NSCLC patients scheduled to undergo a lobectomy. These patients included both sexes ages 20 to 80 years, with an Eastern Cooperative Oncology Group (ECOG) Performance Status (PS) of 0 or 1, and the proportion of consolidation to ground-glass opacity of over 50% on high resolution CT. Patients who had been administered corticosteroids or immunosuppressants, as well as patients who had any serious medical conditions (uncontrolled heart, lung, liver or kidney disease or diabetes), synchronous or metachronous malignancies, or any preoperative anti-cancer treatments, were excluded from the study. The stage of all patients was determined in accordance with 7th edition of the TNM classification for lung and pleural tumors (7).

Lobectomy with mediastinal lymph node dissection was performed by a thoracic surgeon under general anesthesia. Thoracotomy or thoracoscopic surgery was performed according to procedures developed by each institution. In the operating room, a catheter was inserted into the radial artery while the patient was under general anesthesia, and blood samples of more than 3 mL were collected in a tube containing EDTA-2Na before surgery (for measurement of pre-CTC) and just after pulmonary vein (PV) dissection (for measurement of post-CTC). Immediately after collection of the blood samples, within 4 hours of blood draw, CTCs were extracted by the size selection method using ScreenCell®, using 3 mL blood samples respectively. This was followed by H&E staining and preparation of the specimens on a glass slide with a cover glass for microscopic analysis at each institution. The glass slides were stored in a protective container and transferred to the main research center. The glass slides were examined blindly by three pathologists for the presence or absence of cancer cells (positive or negative) (Figure 1). The cancer cells were identified by cytological examination, not by markers. One cancer cell existed, it was considered positive. Diagnostic agreement by two out of three pathologists was used. 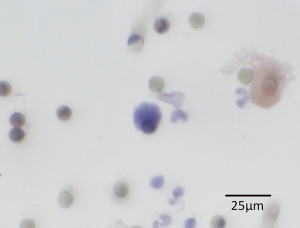 The relationship between CTC detection and the clinical and pathological factors of each patient, as well as the timing of pulmonary dissection from the beginning of surgery, were compared.

Since research on pre- and post-CTCs has not been conducted previously it was not possible to make statistical predictions. Therefore, patient numbers were provisionally set by considering the study as an evidence generative study without a hypothesis. The number of annually registered patients was predicted to be 30 for multi-center collaborative research. Institutions with a number of annual radical surgeries for primary lung cancer of over 50 cases participated, where each institution were directed to include at least 4 patients to minimize technical variability in ScreenCell® between institutions.

All data were analyzed by Student’s t-test, Chi-square test, Mann-Whitney U-test, or by one-way ANOVA, as appropriate. Patient demographic data were analyzed by one-way ANOVA for continuous variables and chi-square test for categorical variables. SPSS version 14.0 (SPSS Inc., Chicago, IL, USA) software package was used for statistical analyses. A value of P<0.05 was considered to be significant.

Thirty-one patients from six institutions were registered for the study between July 2015 and January 2016. Two patients were excluded from the study due to pleural dissemination discovered during surgery; thus, a total of 29 patients were enrolled in the study (Figure 2). Among these 29 patients, 14 were male and 15 were female, with a median age of 71 years (52–80 years), and patient’s T factors were cT1b in 16 patients, cT2a in 12 patients, and cT2b in 1 patient. The pathological stages were IA in 9 patients, IIB in 9 patients, IIA in 5 patients (4 patients with N1 and 1 patient with T3), IIB (T3) in 3 patients, IIIA (N2) in 2 patients, and IV in 1 patient. Histological analysis indicated that 24 patients had adenocarcinoma, 3 patients had squamous carcinoma, and other types were found in 2 patients (adenosquamous carcinoma and large cell carcinoma). Time to PV dissection was 81.6±40.2 minutes (Table 1). 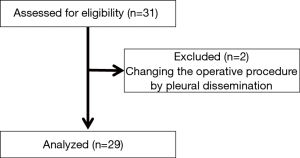 Figure 2 The diagram of the study. 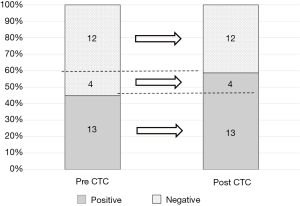 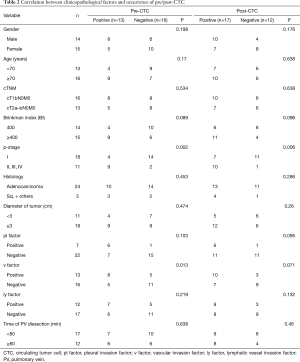 The four patients who were pre-CTC negative and became post-CTC positive included two males and two females. Three of the patients had adenocarcinoma while one had squamous cell carcinoma. The pathological stages included IA in 1 of the patients, IB in 2 patients, and IIA in 1 patient, while the time to PV dissection was between 36 to 153 minutes. There was no significant difference compared with post-CTC negative patients (Table 3).

In this study, the possibility of CTC dislodgement by surgical manipulation is likely based on the result that CTCs were detected after lung cancer surgery among patients who underwent lung cancer surgery considering the fact that there were no cases of pre-CTC positive and post-CTC negative.

Radical surgery is the first choice for treating patients with clinical stage I–II NSCLC. The 5-year survival rate for patients who have undergone radical surgery were 86.3%, 73.9%, 61.6%, and 49.8% in patients with stages IA, IB, IIA, and IIB NSCLC, respectively (4). Metastasis can occur in patients who have undergone complete resection with no residual lesions. This outcome may indicate that ITCs exist in the body post-surgery, some of which are derived from CTCs triggered by surgical manipulation, while there is the possibility that ITCs may be present pre-surgery. In single institutional retrospective observations (6,8-10), it was reported that CTCs were detected after surgery and was speculated to be caused by surgical manipulation.

During lung cancer surgery, since it could be hypothesized that CTCs were dislodged by surgical manipulation, some surgeons interrupted the PV first to prevent seeding of malignant cells, resulting in decreased metastatic implantation. This hypothesis was confirmed scientifically by Refaely et al. (14) attempting to determine whether the sequence of vessel interruption during lobectomy (lobar vein or lobar artery first) and surgical manipulation affected disease recurrence and showing that the sequence of vessel interruption during lobectomy did not play a role in tumor recurrence but lung manipulation did. However, conclusive evidence regarding the sequence of vessel interruption during lobectomy has not been reported. Besides, there are reports suggesting that lung cancer surgery causes circulatory cancer cells in the blood of the PV (15-17), but that phenomenon was also speculated using peripheral blood, but the sensitivity was very low (8).

The methodology for identifying CTCs has changed. First, Hansen et al. (18) identified tumor cells which were isolated from intraoperatively salvaged and washed blood by density gradient centrifugation for cases of various malignancies. Later, polymerase chain reaction (PCR) (15) and flow cytometry (19) methods were introduced to improve sensitivity and specificity. Among more modern CTC detection systems, the EpCAM positive selection method using magnetic antibodies (CellSearch® system) was the first utilized to show morphological evidence of CTCs during lung cancer surgical procedures (20). However, the sensitivity for the detection of CTCs in peripheral blood samples obtained during lung cancer surgery is not high and clustered cells might be missed by the CellSearch® system (20). As a way to compensate for the low sensitivity in peripheral blood samples and for clustered cells, the ISET® system was developed (21), although the equipment is costly. In contrast, the CD45 negative selection method (RosetteSep™) does not require a specialized machine and can detect clustered CTCs perioperatively among lung cancer tumor cells (9,10), although its sensitivity is lower than other CTC detection methods. As a result, tests for perioperative CTCs in lung cancer cases have been performed using PV blood from resected lungs with RosetteSep™ (9,10). In a recently published report on the CTC status in lung cancer surgery patients that utilized an exhaustive genetic analysis, cells were collected from the PV blood by using a flow cytometry method for EpCAM (22). The ScreenCell® CTC selection kit is a highly sensitive size selection method that collects most of all spiked tumor cells in the blood without the use of a specialized machine and can also detect clustered cells (23), since very few CTCs in the peripheral blood were likely extracted. This is the reason that this investigation can provide a positive result for CTC dislodgement by surgical manipulation.

Since the goal of this study was to prove the CTC occurrence caused by surgical manipulation of lung cancer using a multicenter prospective setting, the evidence level is considered to be higher than for former institutional retrospective observations. The CTC occurrence patterns varied in the negative to negative, negative to positive and positive to positive, but without positive to negative, which demonstrates the contribution of surgical manipulation in the occurrence of CTCs. There are limitations in this study, such as over diagnosis of CTC and the limited number of patients. However, CTC diagnosis was carried out by three pathologists making observation bias limited. In addition, a greater number of patients may be needed to clarify CTC dislodgement by surgical manipulation, but the prospective multicenter setting overcomes this limitation.

In conclusion, the possibility of CTC dislodgement by surgical manipulation is shown based on the result of a multicenter prospective study that CTCs were detected after lung cancer surgery, where there were no cases of pre-CTC positive and post-CTC negative.

Funding: This research was supported by a Grant-in-Aid for Scientific Research [(B) 25293301] from the Ministry of Education, Science, Sports and Culture.

Ethical Statement: This multi-center, prospective controlled study was approved by the Institutional Ethics Review Board (Teikyo University Review Board 15-010), and the study was registered in the University Hospital Medical Information Network (UMIN000018602). All participants provided written informed consent prior to the start of the study.