Chylothorax represents a severe condition resulting from the accumulation of chyle into the pleural space (1). Although rare in incidence, it is considered a major complication after thoracic surgery, leading to significant morbidity (2). We describe the case of a 17-year-old boy with chylothorax occurred after surgical resection of paravertebral ganglioneuroma (GN), which was successfully treated by the use of a fibrin sealant patch (TachoSil®).

A 17-year-old boy presented to our emergency department with a history of left hemithorax discomfort irradiated to the left side of abdomen. His past medical history was silent. Chest X-ray showed a paravertebral mass and consequently the patient underwent a magnetic resonance imaging (MRI) demonstrating a solid, encapsulated smooth-featured tumor (47 mm × 64 mm) with low signal intensity on T1-weighted images and high signal intensity on T2-weighted images (Figure 1A). Since a neurogenic tumor of mediastinum was suspected, the patient underwent a video-assisted thoracoscopic resection of the mediastinal tumor and he was successfully discharged after 7 days of uneventful postoperative course. A chest X-ray taken just before the discharge showed a small left pleural effusion which was attributed to be a consequence of the surgical procedure itself. Definitive pathology report established the diagnosis of typical GN, without any evidence of a ganglioneuroblastoma (Figure 1B). Two weeks later, the patient was readmitted to the hospital because of dyspnea and nausea. Chest X-ray showed a relevant left pleural effusion with partially collapsed lung (Figure 2). A total amount of 2,000 mL of milky fluid was drained and the biochemical evaluation of pleural fluid indicated a high triglyceride concentration (210 mg/dL) and low cholesterol levels (160 mg/dL) suggestive for chylothorax. Chest tube was inserted and concurrently the patient was treated with total parenteral nutrition (TPN) and octreotide intravenous infusion for 2 weeks. Since the amount of discharge did not reduced (900–1,200 mL/day), surgical procedure was planned for the persistent chylothorax. Thirty minutes before surgery, cream was given to the patient. A posterolateral left thoracotomy was performed in seventh intercostal space and, once identified the leakage point in the left paravertebral sulcus, it was sutured with polypropylene 5-0 stitches. Moreover, parietal pleurectomy was performed in order to promote pleural symphysis. The initial postoperative course was uneventful and the patient continued to be fed by TPN. However, the chyle drainage did not reduce as expected (we registered a median output of 800–900 mL/day), suggesting a failure of the previous surgical ligation. On the 5th postoperative day, the patient underwent a second surgical exploration for refractory chylothorax. Through the previous left thoracotomy, an accurate inspection of pleural cavity was performed which revealed residual chyle leakage. Because the source of chylous leak was not easily identifiable, two 4.8 cm × 4.8 cm TachoSil® patches were placed over the site of the surgical suture in the paravertebral sulcus, resulting in severe decreased of the residual lymphatic leakage (Figure 3). The surgical procedure was uncomplicated, and the patient was extubated two days after the operation. The control chest X-ray showed complete resolution of left pleural effusion (Figure 2B) and the patient was discharged after 8 days, remaining asymptomatic for the next 12 months. 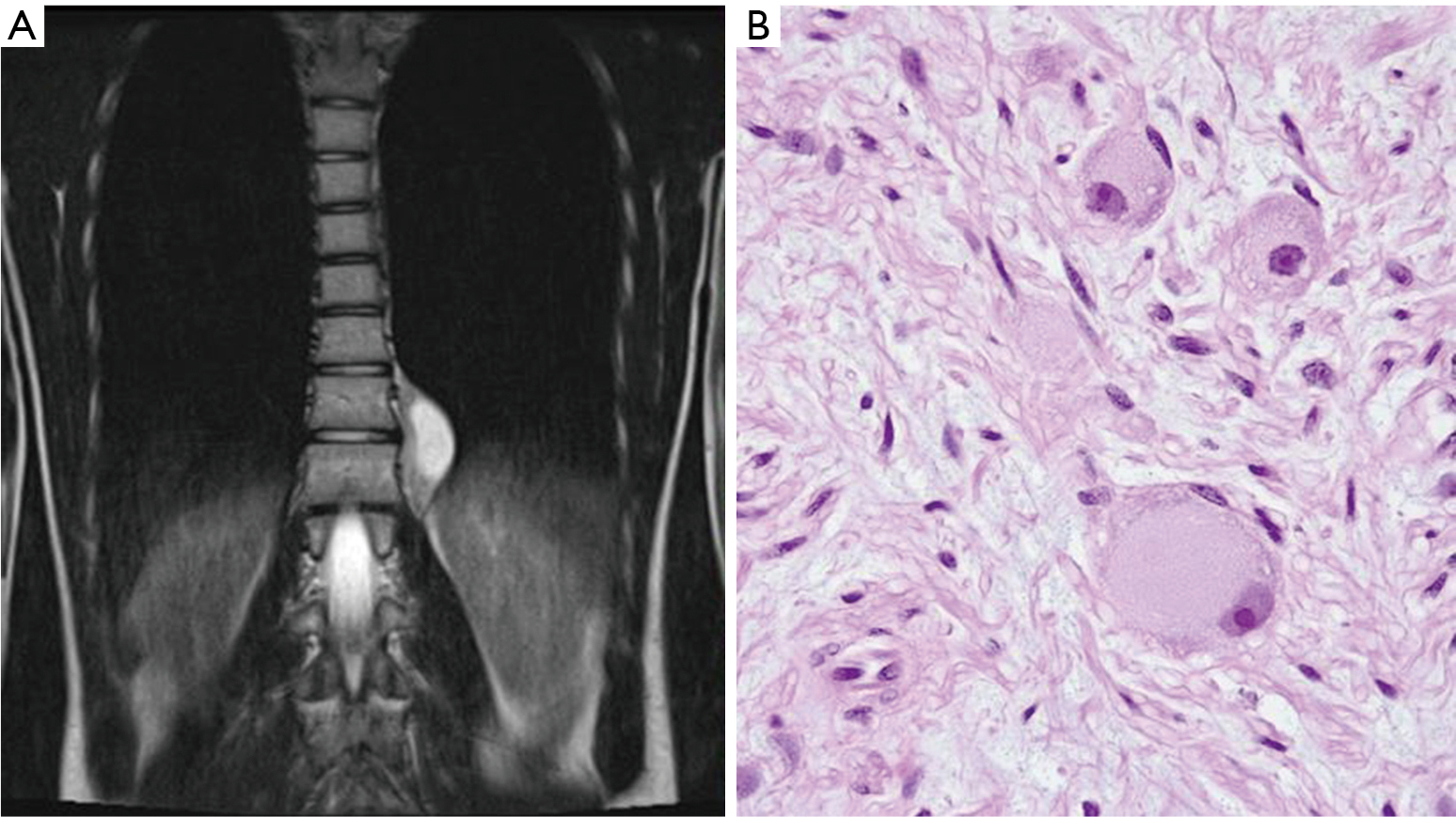 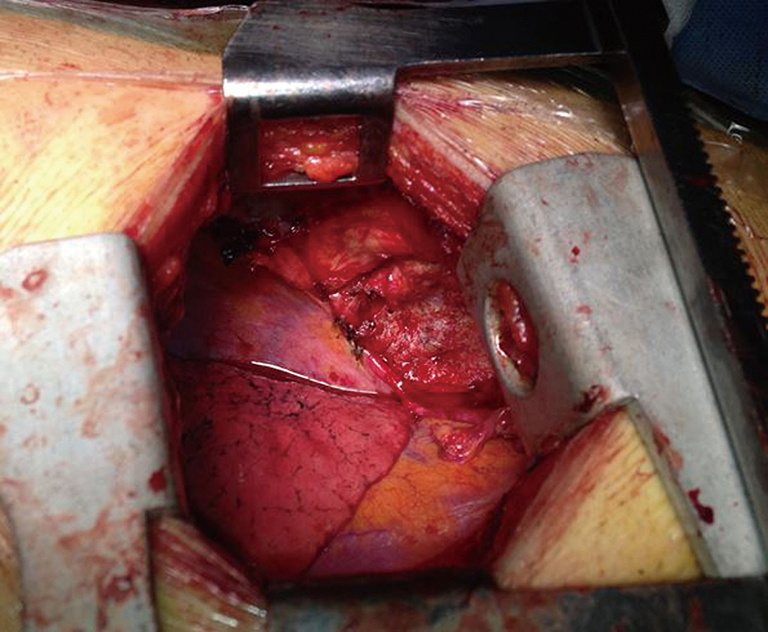 Figure 3 Intraoperative images show the placement of a fibrin sealant patch over the source of chyle leakage in the left paravertebral sulcus.

GN can be considered a benign form of peripheral neuroblastic tumour. It is often asymptomatic and the diagnosis is incidental in the majority of the cases. Currently, complete surgical excision is considered the treatment of choice, even if surgery is associated with a high rate of complications (3). In a recent case series of 23 patients that underwent surgical excision for GN, 7 (30%) had complications after surgery and one developed chylothorax (3). Postoperative chylothorax is relatively rare, occurring in less than 1% of general thoracic surgical procedures (2). Conservative management is traditionally considered the initial therapy, consisting in dietary modifications or TPN, administration of octreotide and chest tube drainage (1). Conversely surgical management should be adopted if medical management fails (1,2). Common surgical strategies include thoracic duct ligation, pleurodesis with talc or fibrin glue and mass ligation of all tissue between the aorta, the spine and the esophagus (1). At the first surgical intervention, the chyle leak was clearly identified by the characteristic flow of milky fluid which occurred after administering cream orally: thus, a direct ligation of the thoracic duct seemed to be the best choice (1,4). Unfortunately, in our case both direct ligation of thoracic duct and pleurodesis were unable to reduce the chyle flow. This was probably due to a lymphatic loss from a small accessory duct which was not closed by our surgical suture. Since performing an additional suture on the site of the previous ligation was considered ineffective, we decided to place a fibrin sealant patch (TachoSil®) on the site of the suspected source of leakage, with complete resolution of the lymphatic effusion. To our knowledge, this is the first case reported of postoperative chylothorax in a young adult treated successfully with a fibrin sealant patch.

TachoSil® is a tissue sealant consisting of an equine collagen sponge coated with human fibrinogen and thrombin. Upon direct contact with body fluids, the fibrinogen-thrombin reaction forms a fibrin clot that allows the collagen patch adhere to the tissue surface. It has found applications for several different surgical fields, including hemostasis and bile sealing in liver surgery and hemostasis in kidney tumor resection (5,6). Regarding general thoracic surgery, the use of TachoSil® following pulmonary resection not only reduces the air leak volume, but also allows an early removal of chest drains and an early discharge (7). However, in the literature, there are few articles about the effectiveness of the use of fibrin sealant patch for reducing lymphatic leakage in thoracic surgery. In a prospective randomized study, TachoComb® is used as local hemostatic agent after mediastinal lymph node dissection, resulting in a reduction of chest drain volumes and consequently an earlier chest tube removal (8). TachoSil® has been found effective in preventing the development of postoperative chylothorax in six children who had intraoperative lymphatic leak during surgical repair of congenital heart disease (9). Since the good outcome of applying a fibrin sealant in pediatric patients, we have evaluated this technique feasible even in a young patient. At present, no other experience in the treatment of thoracic lymphatic leaks with a fibrin sealant patch has been described in the literature.

Our case shows an alternative surgical option for the treatment of postoperative chylothorax. In this setting, the use of TachoSil® can be particularly effective in case of a small lymphatic leak not easily identifiable or when a surgical ligation cannot be safely performed.

Informed Consent: The patient has provided his informed consent for the publication of this case report.