A trachea is rarely subject to the metastasis of various types of cancer, including colorectal cancer. The frequency of tracheal metastasis (TM) from non-pulmonary malignancy is reported to be less than 2% (1). Furthermore, there are very few reports about the TM and its optical management has yet to be established (2).

A 36-year-old man, who had been referred for blood in stool, underwent a surgical resection for the rectal cancer; and the pathological examination revealed the tumor as well to moderately differentiated adenocarcinoma. He received adjuvant chemotherapy with modified 5-fluorouracil and oxaliplatin 6. Computed tomography (CT) scan detected one lung metastasis in the right lower lung and one liver metastasis approximately 2 years after the surgery. Then, he received fluorouracil, leucovorin, and irinotecan (FOLFIRI) plus bevacizumab. Radiographic evaluation, performed every two cycles, revealed partial response in the lung and liver metastases. Then, partial resection of the lung and liver lesions was performed as a curative surgery. After the surgery, six cycles of FOLFIRI was administered. Although the patient has been free from new lesions for three years after the lung and liver surgery, carcinoid embryonic antigen level slightly increased. CT scan of the chest detected a lobulated intraluminal lesion arising from the left lateral tracheal wall (Figure 1A), and the volume-rendered image showed the lesion on 1.2 cm above the carina (Figure 1B). Bronchoscopic examination showed the lesion as a polypoid tracheal tumor (Figure 1C) and was pathologically diagnosed as a TM of rectal cancer. Fluorine-18 (F-18) fluorodeoxyglucose (FDG) positron emission tomography computed tomography (PET-CT) showed an uptake in TM [maximum standardized uptake value (SUV) =5.49] and without any significant intake of FDG in other organs (Figure 1D), and therefore, we subsequently underwent a tracheal resection and reconstruction as curative resection. 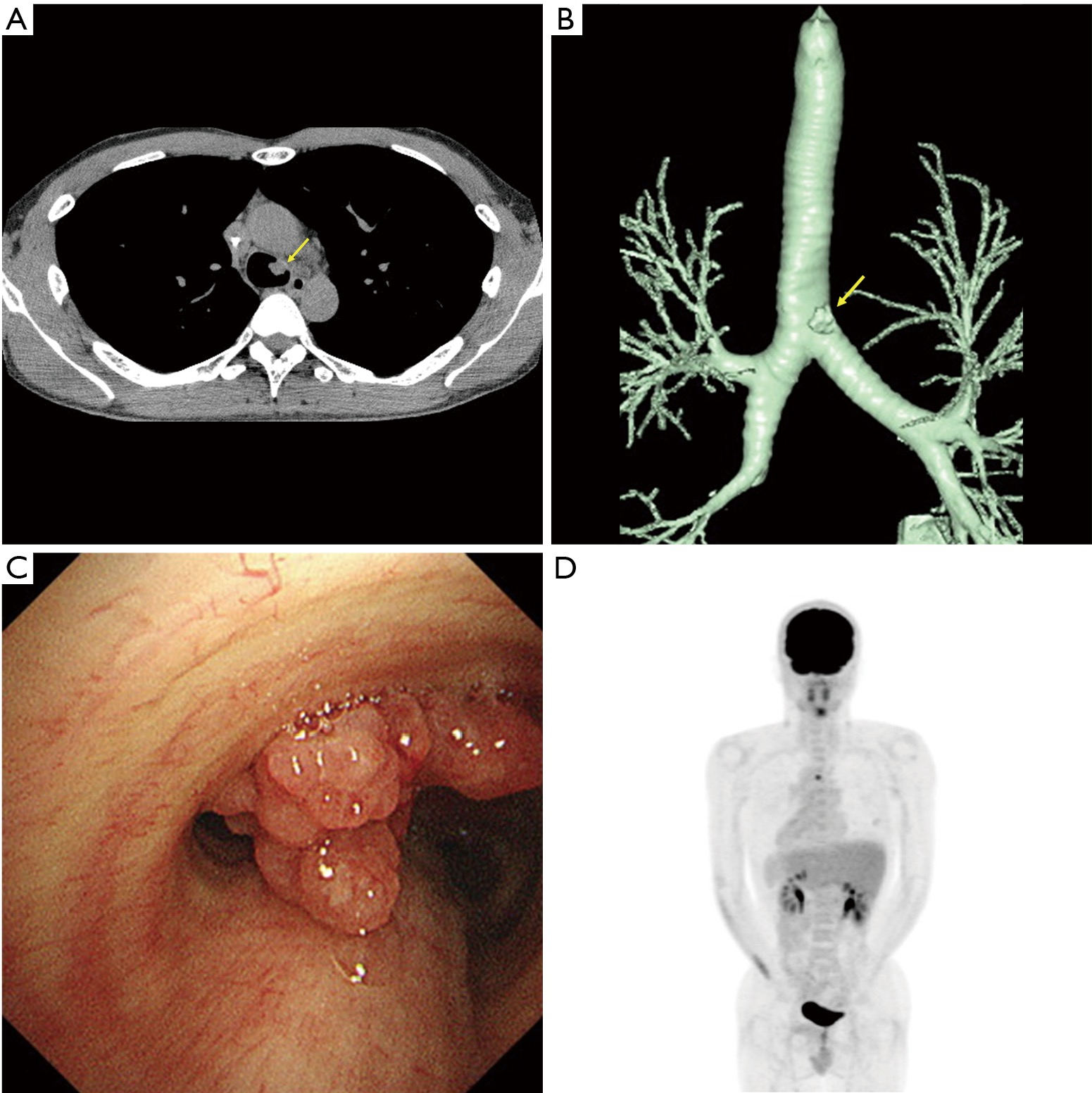 Figure 1 A 36-year-old man with a tracheal metastasis of rectal cancer. (A) Computed tomography scan of the chest detected a lobulated intraluminal lesion arising from the left lateral tracheal wall; (B) the volume-rendered image showed the lesion on 1.2 cm above the carina; (C) bronchoscopic examination showed the lesion as a polypoid tracheal tumor; (D) fluorine-18 fluorodeoxyglucose positron emission tomography computed tomography showed an uptake in the tumor (maximum standardized uptake value =5.49) without any involvement of the other organs.

Through posterolateral incision, the chest cavity was opened through the 4th intercostal and left main bronchus and trachea was exposed. An incision on the lower trachea was made just beneath the carina and a ventilation tube (spiral tube 5.5 mm) was inserted to the left main bronchus. Then trachea was cut two rings away from the carinal cartridge, avoiding the incision to the tumor under bronchoscope (Figure 2A). One ring of trachea was removed with tumor (Figure 2B), and we confirmed surgical margin was negative by rapid intraoperative pathological diagnosis. JET-ventilation tube was inserted retrogradely and JET-ventilation was initiated. The end-to-end anastomosing suture was placed for the trachea reconstruction. Sutures were tied one by one after placing the suture 2 stitch forward. Finishing the ligation the anastomosing suture, water seal test was performed and no leak was found (Figure 2C). 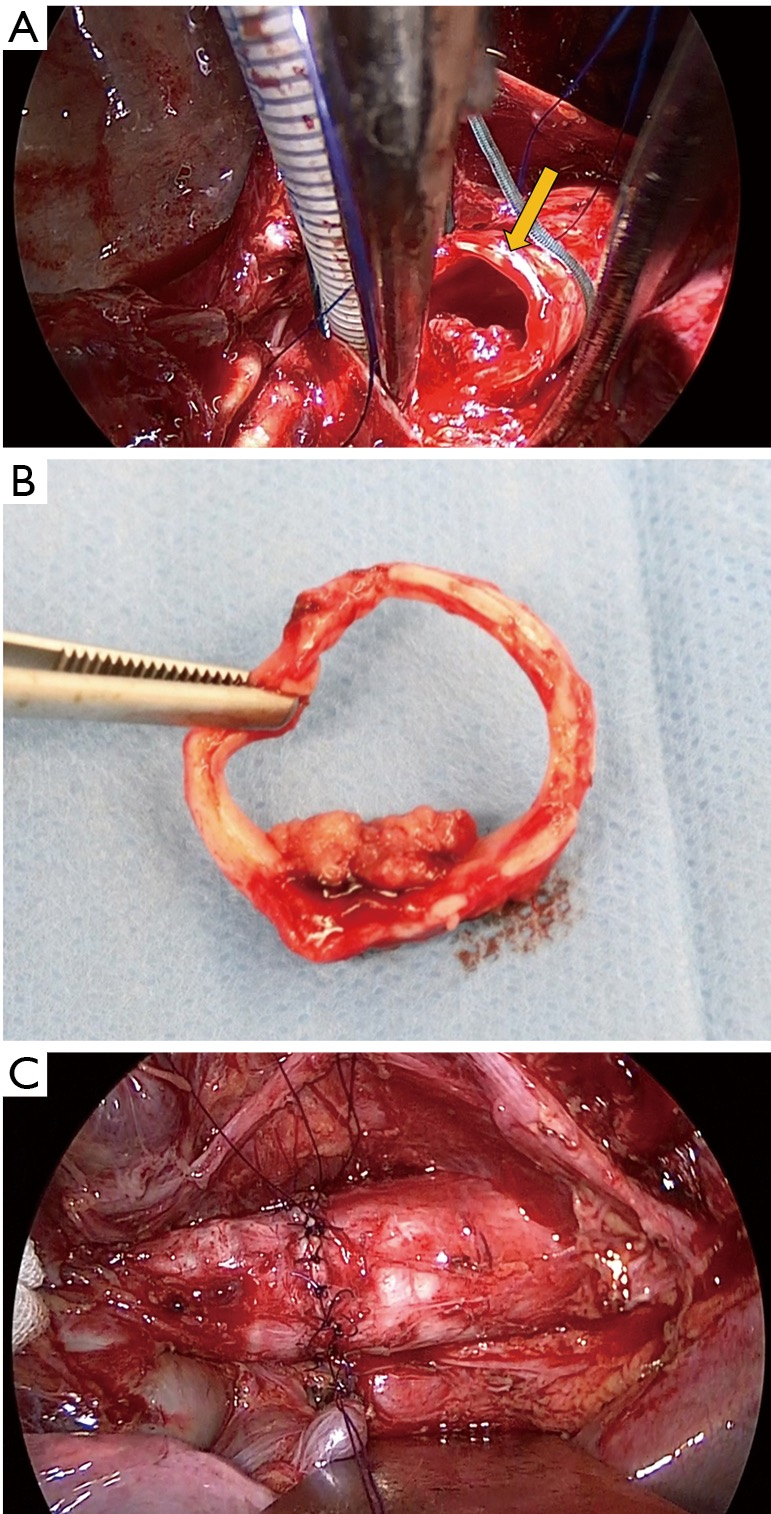 Figure 2 Surgical resection of a tracheal metastasis (TM) of rectal cancer. (A) A tracheal tumor which is made an appearance from the stump of trachea (shown by arrow), and an inserted ventilation tube (B) macro image of TM with polypoid growth; (C) the reconstructed trachea by end-to-end anastomosis.

Pathological examination revealed the tumor as adenocarcinoma with tubular pattern, which was similar to primary rectal adenocarcinoma (Figure 3A). The carcinoma cells invaded the submucosal layer of tracheal wall (Figure 3B). The resected margins were free of carcinoma cells. Six months after the tracheal resection, he is doing well without any evidence of recurrence. 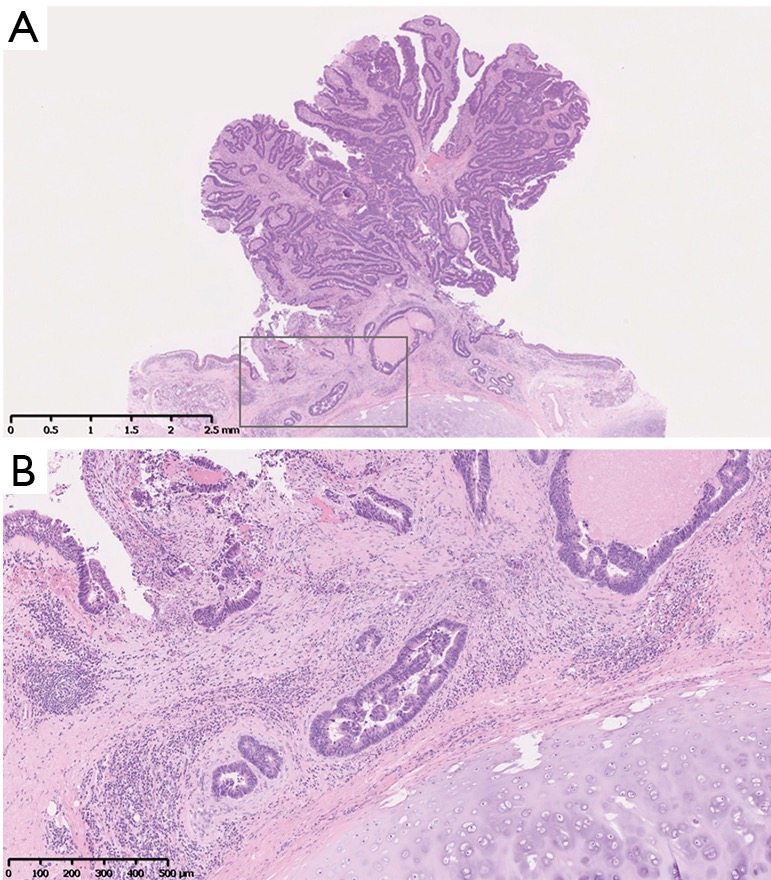 The mechanism of TM has yet to be fully clarified; however, the mechanism of endobronchial metastasis is considered metastatic deposits, which are carried to the lung by pulmonary arteries or lymphatic channels, enter the peribronchial lymphatics and progress into the submucosal space (7). There exist several data which support this possible speculation: Kiryu et al. reported that 20 of 32 endobronchial lesions (62.5%) involved the submucosal layer (2); Taichman et al. also reported the invasion of the prominent angiolymphatics (8). In accordance with these reports, our pathological image also showed the involvement of the submucosal layer (Figure 3), with the possible angiolymphatic invasion of the tumor.

There are several treatment options for TM: surgery, bronchoscopic treatment, radiation therapy and chemotherapy. Bronchoscopic treatment is effective in reducing endotracheal obstruction or controlling hemoptysis for palliative treatment (9): there is a report which demonstrated the effectiveness of bronchoscopic electrocautery for removing a lesion (10). Moreover, another report showed the significance of laryngomicrosurgery for the TM (11). However, for curability of TM, the most optimal treatment of the TM would be a surgical resection, because TM often involves the submucosal layer or the angiolymphatics as mentioned above. Although snaring or argon plasma coagulation under bronchoscopy are often used for the TM with polypoid proliferation (12), there is a risk that the TM cannot be completely resected by such treatments, if there was an involvement of the submucosal layer. In fact, previous report showed that TM could not be completely extirpated by a laser microscope (6). Furthermore, Fournel et al. also reported that 13 among the 42 lesions (31%) were incompletely resected by bronchoscopic treatment (9). Given these reports and the current case, surgical resection of a trachea might be the curative treatment option, though such procedure is complicated, risky, and invasive with the need of much experience. The reported findings that most of the reported TM is a single lesion (10/11, 90.9%) may support the idea that surgical resection might be the curative therapy.