Anesthesia for lobectomy in thoracic surgery is a great challenge because it requires single contralateral lung ventilation with collapse of the ipsilateral lung. Collapse of the operated lung and ventilation of the other lung may induce an inflammatory response (1). The ventilated lung is hyperperfused, receiving most of the cardiac output and may be damaged by mechanical ventilation. The collapsed lung is exposed to ischemia, reperfusion injury and shear stress on reexpansion and postresection ventilation. As a result, patients who undergo lobectomy postoperatively may develop compromised lung function. Acute lung injury, reduced lung compliance and hypoxemia and an increase in pro-inflammatory cytokines, all are reported (2-6). The aim of mechanical ventilation during one-lung ventilation is (I) to facilitate carbon dioxide elimination; (II) to maintain oxygenation; and (III) to minimize postoperative lung dysfunction. There have been numerous investigations performed to determine the most appropriate means of mechanical ventilation. In this study we systematically searched the literature and the evidence for each graded recommendation.

Systematic search was performed to identify articles related to mechanical ventilation settings in patients undergoing lobectomy (((((((“2000/01/01”[Date - Publication]: “3000”[Date - Publication]) AND Clinical Trial[ptyp])) AND (anesthesia AND Clinical Trial[ptyp])) AND (((ventilation) OR ventilator) OR tidal volume)) AND ((surgery) OR resection OR operation OR lobectomy)) AND ((pulmonary) OR lung)). Studies were considered to be eligible if they fulfill the following criteria: (I) the study population involved patients who underwent lobectomy; (II) the primary intervention involved mechanical ventilation strategy; (III) articles were published after January 1st, 2000.

Classification and levels of evidence were graded according to American College of Cardiology/American Heart Association (ACC/AHA) rules (Available at: http://assets.cardiosource.com/Methodology_Manual_for_ACC_AHA_Writing_Committees.pdf).

Our initial search identified 461 citations. Four hundred and ten were excluded because in 176 studies the investigated patients underwent operations other than lobectomy, 84 studies did not investigate mechanical ventilation and 100 were unrelated studies. The remaining 51 citations were considered to be eligible for the present review.

Hypercapnia, secondary to reduced alveolar ventilation has been noted as a component of protective lung ventilation in clinical practice (9). It has been shown in both clinical and experimental studies that therapeutic hypercapnia can ameliorate severity of sepsis, injury induced by mechanical ventilation, and acute respiratory distress syndrome (10-13). In patients undergoing lobectomy with one-lung ventilation, hypercapnia facilitates inhibition of local and systemic inflammatory responses (REF?). Postoperative respiratory function, assessed by peak plateau pressure and dynamic compliance, was improved by hypercapnia induced by inhaled CO2 (14). Hypercapnia has been shown to reduce systemic vascular resistance, increase cardiac index and pulmonary vascular resistance (15). Although these pilot studies are randomized controlled trials, they are small in sample size and will require more study in larger cohorts before stronger recommendations can be made. However, we can assume that hypercarbia is not harmful, except in the face of pulmonary hypertension, possibly cardiac arrhythmia and high intracranial pressure.

Permissive/therapeutic hypercapnia, to maintain a partial pressure of carbon dioxide of 50-70 mmHg potentially may be beneficial in patients undergoing single lung ventilation during pulmonary lobectomy operations (class IIa, level B).

During operative lobectomy with one-lung ventilation, results of PV in improving patients’ outcomes are confusing (Table 1) (21,22). Several studies failed to identify beneficial effects with PV strategy (21,23,24). Another randomized controlled trial favored the use of high tidal volume (HTV; 10 mL/kg) ventilation, as it resulted in less hypercarbia, less dead space, better dynamic compliance, and less postoperative atelectasis (25). However, in this small study (n=34 patients) there was no difference in postoperative morbidity, or length of stay with LTV or HTV. In another study, LTV was found to be associated with increased risk of arterial hypoxemia (26). 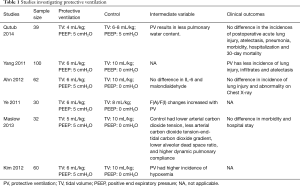 This paragraph is out of place. There is no mention of FIO2 in the recommendation. Further, “protective ventilation” advocates do not mention FIO2 except as a mechanism to maintain PaO2 in the face of low PEEP. I recommend this be a part of the “open lung” discussion.

PV with tidal volume of 6–8 mL/kg and a PEEP of 5 cmH2O is reasonable based on current evidence (class IIa, level B).

Alveolar recruitment is traditionally used to open collapsed lungs, which typically occur in acute respiratory distress syndrome, but there is scarce evidence to support the use of alveolar recruitment in patients undergoing lobectomy with one-lung ventilation. In a feasibility study, Downs and colleagues reported that open lung ventilation (another term used for alveolar recruitment), which is performed by initially setting the PEEP to 30 cmH2O, then adjusting the amount needed to maximize compliance, is safe and effective. A novel form of ventilation was applied to maintain the lung “open”. Apneustic anesthesia ventilation (AAV), similar to airway pressure release ventilation (APRV), utilized a continuous positive airway pressure (CPAP) of 15–30 cmH2O. Ventilation was accomplished by decreasing airway pressure for 1–2 s to allow exhalation of a tidal volume of 6 mL/kg, but not long enough to permit lung collapse. Further, patients did not receive supplemental O2, even on induction of general anesthesia, prior to extubation, or in the recovery room. Use of LTV, CPAP titrated to maximize lung-thorax compliance, FIO2 =0.21, low ventilator rate (6–8 BPM) and mild hypercarbia (48–52 mmHg) were associated with no PPC. In this cohort of 12 patients, there was no atelectasis or infiltrates, and there was no complication or mortality (29).

Different mode of mechanical ventilation may produce different pulmonary mechanics for patients during surgical procedures. For instance, volume controlled ventilation (VCV) guarantees the tidal volume of inspired gas, whereas pressure controlled ventilation (PCV) provides a preset pressure to the airway. In a crossover study, involving patients undergoing open thoracotomy with one lung ventilation, PCV offered improved right ventricle (RV) function compared with the use of VCV. No other clinical outcomes were reported in this study (30). In other studies, PCV did not provide any beneficial effect, except for reduced peak airway pressure during ventilation (31-33). In a small pilot study involving 30 patients, the pressure-controlled volume-guaranteed (PCV-VG) mode appeared to offer clinical benefits in terms of lung mechanics and pro-inflammatory cytokines (34). However, other long-term outcomes were not investigated in these studies. In elderly patients with compromised pulmonary function, PCV and PCV-VG were found to have significant beneficial effects on intraoperative oxygenation and airway pressure (35-37).

PC or PCV-PG is recommended over VCV and can be used in patients undergoing lung resection with single-lung ventilation (class IIa, level B).

CPAP is commonly used for patients with respiratory failure. Patients undergoing lung resection are at increased risk of postoperative acute lung injury. In a recent randomized controlled trial, CPAP applied for 6 h after operation was able to improve the oxygenation index at 24 h as compared to supplemental oxygen through a Venturi mask. Other clinical outcomes such as postoperative pulmonary complications and duration of stay in the post-anesthesia care unit (PACU) and hospital were not different between groups (38). Similar results are found in another study with smaller sample size (39). CPAP can be delivered via Boussignac CPAP system and helmet. In patients with a preoperative FEV1 <70%, pre- and post-operative use of pressure support ventilation significantly reduced pulmonary dysfunction following lobectomy (40).

CPAP can be used in patients undergoing lobectomy and one lung ventilation, and is beneficial in improving short-term oxygenation (class IIa, level A).

Thoracoscopic lobectomy without tracheal intubation may be an alternative to conventional one-lung ventilation, in selected patients (class II, level C).

The setting of I:E ratio in controlled mechanical ventilation has been shown to have clinical important clinical impact on patients undergoing lobectomy with one-lung ventilation. A study involving 56 patients showed that setting I:E ratio to 1:1 as compared to 1:2 can reduce airway pressures and improve pulmonary compliance, but cannot significantly improve arterial oxygenation (46). Similar findings were reported in patients with low diffusion capacity of lung for carbon monoxide (47). AAV reported by Bratzke and Downs utilized an I:E of 2:1 to 4:1, as discussed earlier, with no PPC (48).

Controlled mechanical ventilation with I:E ratio of 1:1, or greater, is reasonable in patients undergoing one-lung ventilation (class IIa, level B).

There is a pervasive, but scientifically unsupported assumption that higher inspired oxygen concentrations yield a protective and beneficial effect during thoracic surgical procedures. However, absorption atelectasis rapidly occurs within minutes of induction of general anesthesia with high FIO2 and detection of deterioration in lung function may be delayed significantly (27).

Few clinical trials have even mentioned FIO2, a variable that likely has a profound influence on atelectasis, postoperative work of breathing, and, possibly, PPCs (49,50).

Preoperative nebulized budesonide was found to be effective in reducing peak and plateau pressure during mechanical ventilation. The effects of the drug lasted to the postoperative period where lung compliance was improved and pro-inflammatory cytokines were reduced after lung re-expansion (51). The use of intravenous sivelestat, a selective neutrophil elastase inhibitor, was effective in limiting inflammatory response and improving oxygenation (52,53). In a single RCT it was reported that preoperative injection of ulinastatin at 5,000 U/kg could attenuate local pulmonary inflammatory response in one-lung ventilation (54).