Lophomonas blattarum is a multiflagellated parasite which inhabits the intestine of different cockroaches. These vectors eliminate the parasite through the feces and once eliminated, it forms cyst that remains in the environment (1). Although the infection by L. blattarum is very rare in humans, it could infect the lung of susceptible patients through the inhalation of dust containing the cyst. Apart from the lung, it can also infect other organs like maxillary sinuses and genitourinary system (1,2).

With regard to its pathogenic mechanism, it has been identified that certain proteases are involved in different cellular damage mechanisms as cyto-adherence, epithelial barrier rapture, apoptotic induction among others (3).

The first case of pulmonary infection by L. blattarum was described in China by Chen and Mengsin in 1993 and since then, 137 cases have been described. Moreover, 6 new cases in Peru and 2 in Spain have been reported and majority of these new cases occurred within the last 5 years with immunosuppression being the principal characteristics in 69.1% of the cases and background of transplantation in 30.9% of the patients (4). The presentation of bronchopulmonary lophomonas is not specific since it encompasses indistinct common symptoms of other pathologies such as fever, cough and dyspnea, with eosinophilia in up to 35% of the patients. The diagnosis is based on microscopic identification of the protozoon in samples of bronchoalveolar lavage and bronchial brushing. Treatment with metronidazole has been demonstrated to be very efficient in these patients (5,6).

We present the case of a male patient of 2 years 3 months old with a background of severe combined immunodeficiency and post-hematopoietic stem cell transplantation, who after 1 year of successful transplant suffered bronchopulmonary lophomonas which is the first case reported in a pediatric patient in Mexico.

It is about a male child of 2 years 3 months old, native and resident of Pachuca, Hidalgo, Mexico without blood related or endogamy background of lophomonas. He was a product from normoevolutive pregnancy, delivered by caesarean section indicated due to short intergestational period. His birth weight and height were 2.950 kg and 48 cm respectively. BCG vaccine was applied at birth. The clinical history revealed an early death of an uncle by infectious process. At 5 months old, he presented pneumonia that was complicated with acute respiratory distress syndrome (ARDS). He was diagnosed of severe combined immunodeficiency based on lymphopenia. Immunoglobulin levels were IgA 7 [8–68] mg/dL, IgG 79 [172–814] mg/dL and IgM 12 [33–108] mg/dL. Flow cytometry showed lymphocyte subpopulations with phenotypes T, B and NK being negative.

Treatments based on Isoniazid (10 mg/kg/day) and rifampicin (15 mg/kg/day) were started. At 8 months old, he was subjected to hematopoietic stem cell transplant from a related living donor of 100% compatibility. Cell dose applied was CD 34+ in 5.9×106. Data of grafting showed that this started from the day +19. At 3, 6, 9 and 12 months, CD4, CD8, NK and CD19 reconstitution with lymphocyte proliferation were normal. Complete immune reconstitution was in 12 months. Fifteen months after transplant, he began with cough in accesses and was treated with Amoxicillin. Two months after, he started with nocturnal cough and in the third month of evolution, he suffered viral pneumonia, documented in viral panel. Blood count showed Hb 13.2, HCT 38.9%, leucocytes 7,900, neutrophils 3,800, lymphocytes 3,400, monocytes 600, eosinophils 100 and platelets 255,000. He was treated with oseltamivir and hospitalized for 5 days. After having recovered completely, he was discharged without the need for further antibiotics management, oxygen supplement or other treatments. However, 3 weeks after the viral pneumonia, the patient started with productive cough of non-cyanotic or Morton’s characteristic which intensified in the evenings and midnights. There was neither fever nor other breathing distress data. The present symptoms led us to investigate the possibility of other types of germs as tuberculosis or fungi. Thus, the patient was subjected to pneumological evaluation and data suggestive of bronchopulmonary suppuration syndrome was reported. Consequently, he was sent to Pediatric Pneumology Service for a specialized pneumological evaluation consisting of mycobacterial culture, Xpert MTB/RIF, viral panel, PCR and ESR. All the studies were negatives except ESR with a positivity of 36 mm/hr. High resolution tomography revealed consolidation that predominated in the posterior segment and some cylindrical bronchiectasis (Figure 1). Bronchoscopy was performed and bronchoalveolar lavage was obtained for culture with the report of L. blattarum. The diagnosis of L. blattarum was based on direct microscopic observation of mobile ciliated protozoan structures. In the same way, the culture identified the presence of the said structures and for the structural characteristics, it was considered as the most likely possibility. A 21-day treatment with Metronidazole was begun with complete clinical improvement. 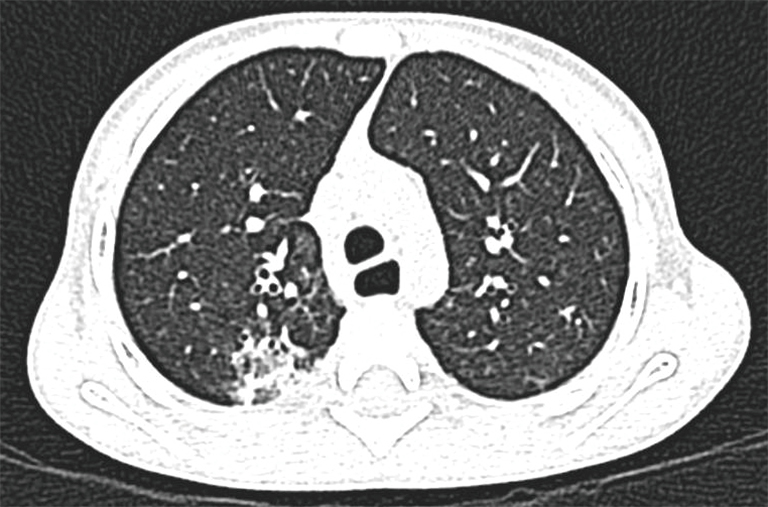 L. blattarum is a protozoon that generally lives in gastrointestinal apparatus of cockroaches and other insects (7). The presence could easily be observed and determined with light microscope for being mobile and for having piriform structure like other protozoan agents but different for possessing about 50 or more flagella. In the gastrointestinal tract of the cockroaches, it co-inhabits with other protozoa like Entamoeba blattae, Lophomonas striata and Nyctotherus ovalis. Its diameter ranges from 15 to 40 µ depending on the number of vacuoles that it possesses. It has a Golgi body, mitochondria and other organelles in its cytoplasm (8).

The clinical signs of L. blattarum are generally nonspecific in majority of the series and publications, however since most of the patients have had lung involvement, the clinical findings of pneumonia are the same as in other types of pathogens. Although being an infrequent pathogen, it could have an unusual clinical presentation or picture. At worldwide level, only five cases of paranasal sinus infection have been documented in patients in Iran, all with the usual symptomatology and complete improvement after treatment with metronidazole following microbiological isolation of the pathogen (9).

Although, most of the cases reported have been in immunocompromised patients, there are also an appreciable number of cases in immunocompetent people (1,10). In addition, there are various reports on patients subjected to solid organ or hematopoietic cell transplants who developed the infection, especially at pulmonary level, in the course of their illness. Although usually a germ with potential to produce infection, it was found in India as a co-infection with Mycobacterium tuberculosis in a case determined by PCR MTB/RIF (−) in sputum that was managed with antifimic drug for 9 months and oral metronidazole administered until its eradication and confirmed by bronchoalveolar lavage (11).

On literature review, it was found that no more than 140 cases of infection by L. blattarum were documented in patients, especially in natives of China. The age of the patients has been variable. Infection has been documented in both neonates and adults with age range that went from 9 days of life until 95 years of age (1).

In the present case, contact with any type of animal or insect which could be regarded as vector or transmitter was not documented. The present case and those reported until now suggest that any patient with pulmonary chronic disease of allergic character who has not responded to conventional treatment should undergo bronchoalveolar lavage study in an attempt to determine the presence of L. blattarum and if it results metronidazole management should be considered (1,3,4). However, the papers on this topic are from China where a greater number of cases are seen, probably due to the population density and for the fact that in many urban and suburban areas of this country, there is cultural consumption of crawling germs as the cockroaches. We consider that this germ in our patient is real pathogen owing to the respiratory symptoms, radiological alterations, microbiological isolation and absolute improvement of the symptoms and radiological findings (Figures 2,3) after the administration of metronidazole. Written informed consent was obtained from the patient for publication of this case report and any accompanying images. Although to expert eyes with conventional stains, the presence of the pathogen can be determined. In the literature, different stains as Hematoxylin/Eosin, Giemsa and cervical smear (pap test) as well as trichrome stain have been recommended (8). However, this is subject to the availability of each institution and/or the shipment to a laboratory with more training in detection of the parasite (7). 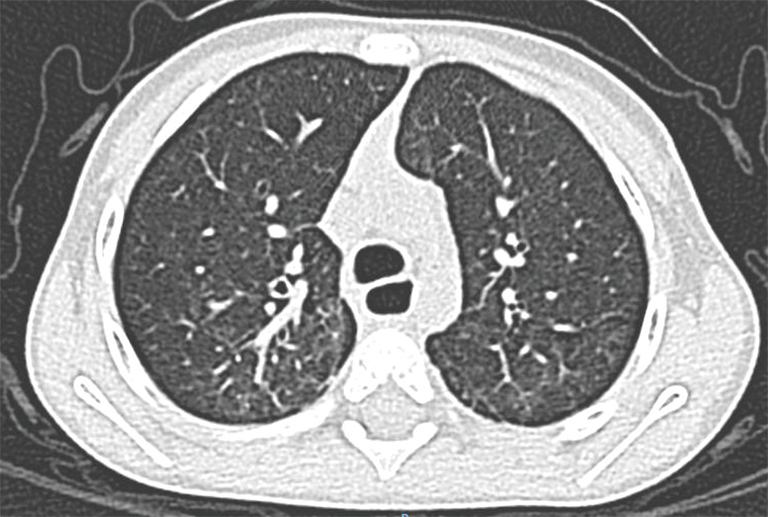 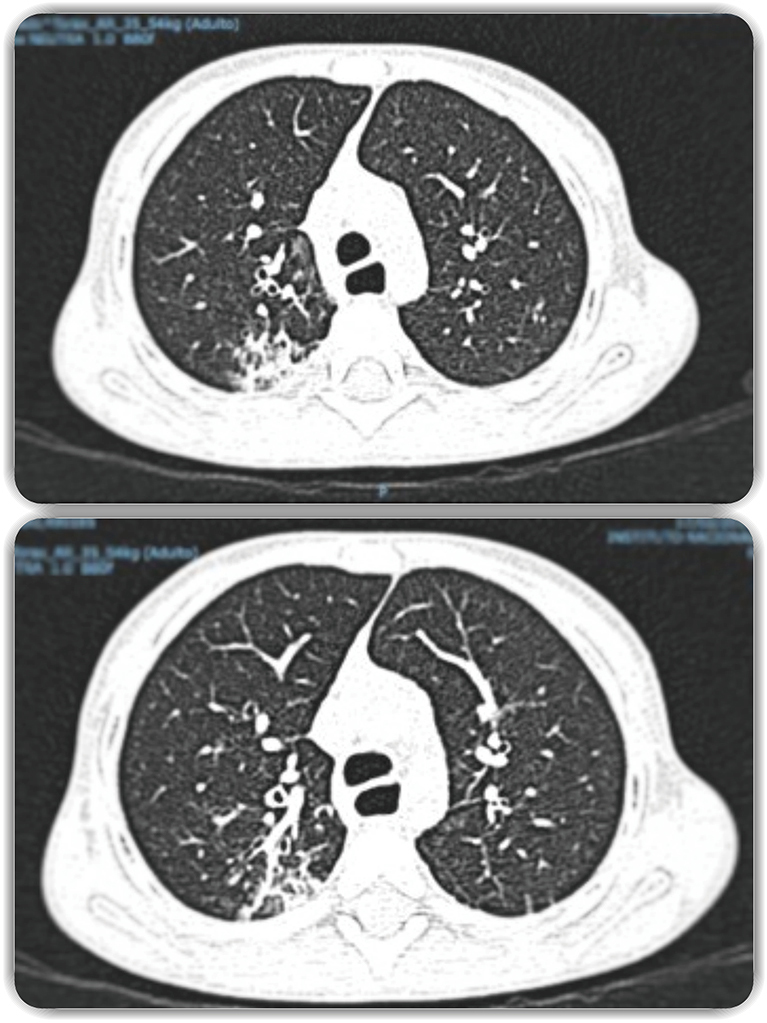 Figure 3 CAT-HR showing before and after metronidazole treatment, improvement of the compromised parenchyma is noted. CAT-HR, computed axial tomography-high resolution.

With respect to the treatment, until today there is no information suggesting L. blattarum resistance to metronidazole. Treatment duration oscillates between 3 to 4 weeks however, more prolonged scheme, depending on the severity of the clinical picture, can be administered. Presently, there is no report on whether Metronidazole could be used in prophylactic form hence; it is an issue which is still has to be addressed especially in patients with immunodeficiency or relapse to the pathogen. The dose of Metronidazole in pediatric patients is 30 mg/kg/day every 8 hours by oral or intravenous administration. In our patient, the initial regimen was administered intravenously to assess treatment response and when clinical improvement was seen without the need for in-hospital management, he was discharged to finish the oral regimen of 21 days at home. Other treatment alternatives could be Albendazole 400 mg/day for 5 days or tinidazole 500 mg every 12 hours for 5–6 days (7).

We consider that all patients with history of immunosuppression with nonspecific data of airway infection of insidious course that do not respond to regular conventional antibiotic treatments for the most frequent microorganisms and with important persistent radiological alterations despite adequate management and who had additionally undergone microbiological studies for frequent bacteria but continued with respiratory symptoms should be subjected bronchoscopy and bronchial brushing in search of L. blattarum, a parasite which is susceptible to metronidazole treatment with high efficacy and rate of cure and without evidence of resistance. As in the case of our patient, there was clinical and radiological improvement after a directed treatment.

We thank Dr. Cyril Ndidi Nwoye Nnamezie, an expert translator and native English speaker, for his invaluable help in the preparation and translation of the manuscript; our thanks also go to the guardians and relatives of the patient for conceding their consent for the case report.