Non-small cell lung cancer (NSCLC) accounts for a large proportion of lung carcinoma, which is one of the major causes of cancer death worldwide (1). During the past decade, adenocarcinoma has been the most common pathological type and the International Association for the Study of Lung Cancer (IASLC)/American Thoracic Society (ATS)/European Respiratory Society (ERS) published a new classification for lung adenocarcinoma in 2011 Feb (2,3). In this classification, guidance for small biopsies in advanced stage patients was also provided (2). It recommends gene test for epidermal growth factor receptor (EGFR) mutation in adenocarcinoma, because these mutations are related to high response to EGFR tyrosine kinase inhibitors (EGFR-TKI) (4,5). While Soda et al. identified anaplastic lymphoma kinase (ALK) gene rearrangement as another diagnostic marker and therapeutic target in 2007 (6). The fusion gene comprised the echinoderm microtubule-associated protein-like 4 (EML4) gene and ALK gene is occurring in 2–7% of NSCLC and 8–22% of light or never smokers suffered from lung cancer (7,8). ALK rearrangement targeting therapies have been investigated recent years. In a phase 3 study, crizotinib is found to be superior to standard chemotherapy in advanced NSCLC with ALK rearrangement (9). However, due to old age, serious diseases or other reasons, not every patient could undergo EGFR and ALK gene analysis. Although liquid biopsy has developed rapidly recent years, it is expensive and has not been popularized in clinic. It is important to find some specific clinical and radiologic characteristics to distinguish adenocarcinoma with ALK rearrangement from those with EGFR mutation.

Previous studies have attempted to investigate the clinicopathologic and radiogenomic features which could predict ALK rearrangement NSCLCs. Although a lot of studies found ALK rearrangement was highly occurred in younger, female and never smoked adenocarcinomas, it was overlapped with EGFR mutated patients on clinical profiles (10-12). Fortunately, some radiologic characteristics of ALK rearrangement were detected (13-16). Nakada et al. (14) reported that ALK rearrangement lesions were smaller and had a low tumor disappearance rate than EGFR mutated lesions on high-resolution computed tomography (HRCT). However, another study discovered ALK rearrangement positive lung adenocarcinomas were more likely to be large and with thoracic lymphadenopathy (15). A nearly research suggests that patents with ALK rearrangement is younger, and characterized by lobulated margin and solid lesion compared with EGFR mutant and wide type cohorts in surgically resected NSCLCs (16). These conclusions were mostly studied in early stage NSCLCs, and may remain some uncertainties.

This retrospective study reviewed the clinical profiles, HRCT images, and FDG-PET features in patients with treatment naïve advanced lung adenocarcinoma (clinical stage IIIB or IV). These patients underwent small biopsies, both ALK rearrangement and EGFR mutation analysis in Jinling Hospital (Jiangsu, China) from January 2013 to December 2015. A total of 428 patients were identified. Eligible criteria included: 18 years or older; stage IIIB/IV NSCLC with percutaneous core needle and/or bronchoscopic biopsy diagnosed as adenocarcinoma; with ALK rearrangement and/or EGFR mutation, had not underwent any treatment (chemotherapy, radiation therapy, or immunologic therapy); performed chest HRCT before lung biopsy in our institution. Finally, 145 patients (91 female and 54 male; age range, 27–78 years; average age, 57.5 years) were included. In addition, patients concurrent with other tumors were excluded (Figure 1). This study design was approved by the Ethics Committee of Jinling Hospital. The requirement for informed consent was waived. 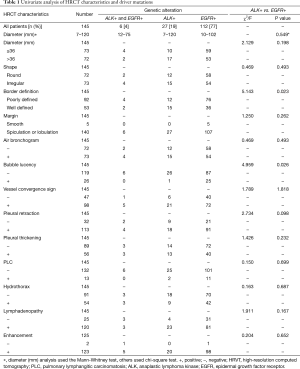 Only 26 of the included patients underwent integrated FDG-PET/CT before any clinical treatment. 18F-FDG was administered intravenously 1 hour prior to PET/CT scans. Fluorodeoxyglucose-positron emission tomography data was analyzed using standardized uptake values (SUV). We used trans-axial images for analysis. SUVs were calculated as decay-corrected activity (kBq) per milliliter of tissue volume divided by injected dose per weight (kBp/g). SUVmax of lymph nodes was measured after placing a region of interest over all masses.

Continuous variables were compared using the one-way ANOVA or the Mann-Whitney test. Categorical variables were analyzed by chi-square test or Fisher’s exact test. Before compare the average diameter, serum carcinoembryonic antigen (CEA) and SUVmax values of tumors with ALK rearrangement and those with EGFR mutation, we calculated optimal cut-off values using a receiver operating characteristic (ROC)-based positive test with ALK rearrangement as categorical variables. Then the tumor diameters, serum CEA and SUVmax values of tumors were dichotomized as ≤ optimal cut-off value and > optimal cut-off value. 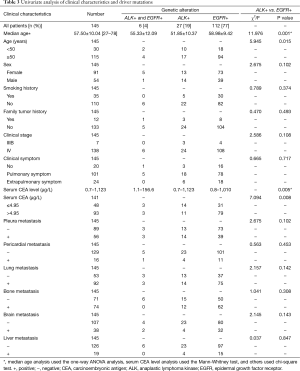 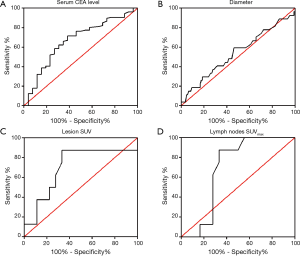 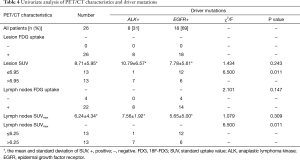 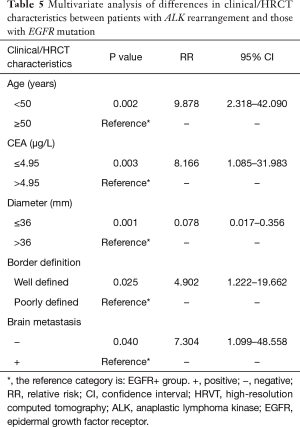 Our study retrospectively reviewed 145 patients with untreated advanced adenocarcinoma in East Asian Chinese population. We investigated the clinical, HRCT, and FDG-PET features between tumors with ALK rearrangement and EGFR mutations.

Unfortunately, there was no significant difference in sex, smoking history, family tumor history, clinical stage, clinical symptom and liver metastasis between patients with ALK rearrangement and EGFR mutations. Both of the groups were prone to be non-smokers, which was consistent with previous studies (20-23). No statistically significant difference was found in tumor metastasis, but the tendencies were agree with Choi et al. (18). Tumors with ALK rearrangement had higher rate of pleura metastasis and pericardial metastasis, lower rate of lung metastasis, bone metastasis and brain metastasis compared with those with EGFR mutations (Table 3).

There were also some limitations in our study. The present study was a retrospective study and was conducted in a single large institution. Patient number was relatively small for our strict inclusion criteria and low rate of ALK rearrangement. Some cases were also excluded for not available HRCT image. There should be a large sample prospective study to validate these results. It was not impossible to analyze clinical and HRCT features according to histopathologic subtypes of invasive adenocarcinoma for limited small biopsy. Most of the patients did not undergo KRAS, ROS1, or c-MET gene analysis; this may have some influence of the results. We could not get complete prognostic information now, because our study reviewed patients from January 2013 to December 2015. We look forward to confirm these results in advanced lung adenocarcinoma prognosis by follow-up research.

In summary, we demonstrated that patients with younger age, lower serum CEA level, large tumor volume, well defined tumor border, and non-brain metastasis are more likely to be ALK rearrangement positive than EGFR mutation positive in treatment naïve advanced lung adenocarcinoma. Other features such as bubble lucency and higher FDG uptake of lesion and lymph nodes may help distinguish advanced lung adenocarcinoma with ALK rearrangement from those with EGFR mutation in the absence of genetic analysis.

Ethical Statement: The study was approved by the Institutional Ethical Committee (approval number: 2017NZHX-002). The requirement for informed consent was waived.