Treatment approaches for non-small cell lung cancer (NSCLC) have been advanced in recent years by identification of distinct, moleculary-defined subsets of patients, called oncogene addicted, that derive benefit from target therapy. Recently genetic alteration in ROS1 was identified in patients with NSCLC. ROS1 is a gene located on chromosome 6 (6q22), where it encodes an orphan tyrosine kinase receptor of the insulin receptor family. Chromosomal rearrangements involving the ROS1 gene consist on the fusion with other genes (CD74, TPM3, SDC4, EZR, LRIG3, FIG), leading to constitutive kinase activity. Until now, at least 12 ROS1 fusion variants have been identified in NSCLC (1).

Due to the high degree of homology within the tyrosine kinase domains of ALK and ROS1, ALK inhibitors were tested in ROS1-positive cell lines and tumours, showing an inhibitory activity.

Based on this preclinical data, the phase I PROFILE trial of crizotinib [phase 1 open-label, single-arm, dose-escalation study with an expansion cohort evaluating the safety, pharmacokinetic and pharmacodynamic of crizotinib (PF-02341066)] was amended to include a ROS1-positive cohort. Ou et al. reported the results of this phase I trial in 36 patients, showing 61% of overall response rate (ORR), suggesting the high clinical efficacy of Crizotinib in this subset of patients [Ou SH, Kim DW, Camidge DR, et al. Crizotinib therapy for patients with advanced ROS1 rearranged non-small cell lung cancer. J Thorac Oncol 2013;8(suppl 2):S295].

The efficacy of Crizotinib in NSCLC patients harbouring ROS1 translocation was demonstrated by Shaw et al. in a phase I trial (4). Currently crizotinib is approved by the Food and Drug Administration and by the European Medicines Agency for the treatment of ROS1-positive NSCLCs defined by FISH.

We describe the case of a young patient affected by a NSCLC ROS1 positive and programmed death ligand 1 (PD-L1) strong with central nervous system (CNS) metastases that benefited from crizotinib treatment.

On October 2014 an 18-year-old Caucasian female, never smoker, was admitted to the hospital with severe dyspnoea, cough and high fever. The total body CT scan revealed a mass in the right lower lobe with several mediastinal and supraclavicular adenopathy, lymphangitis, massive pulmonary embolism and miliary brain metastases, confirmed by a brain magnetic resonance imaging (MRI) (Figure 1A,B). The histological examination, obtained by a supraclavicular lymph-node biopsy, showed a NSCLC mucinous adenocarcinoma TTF1+, CK20-, KRAS wt, EGFR wt, ALK not rearranged and with ROS1 rearrangement detected by FISH. The patient underwent a whole brain radiotherapy (WBRT) and on November 2014 she started crizotinib 250 mg twice daily as first line treatment. Since the first month of treatment the patient showed a significant clinical benefit and the subsequent total body CT scan, performed on January 2015, showed a partial response on the lung mass (80% reduction in the thoracic lesion, 30 mm × 20 mm vs. 60 mm × 57 mm) and a complete response of brain metastases (Figure 2A,B). During the first months of treatment the patient experienced diarrhoea G1, nausea G2, neutropenia G1 and peripheral edema. All toxicities were completely solved after eight cycles of treatment. After 7 months of treatment, in June 2015, a brain MR revealed oligoprogression of the disease (Figure 3A,B). The patient performed a stereotactic radiosurgery (SRS) of five brain metastases and continued crizotinib treatment, maintaining a good performance status and quality of life. On October 2016, due to seizure and speech impairments, the patient was admitted to the emergency department and a brain MRI evidenced further disease progression. Conversely, the total body CT scan revealed partial response in the chest (Figure 4). Crizotinib was permanently discontinued after 23 months of treatment because of brain progression. The patient underwent SRS on November 2016. 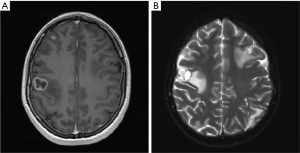 Figure 1 (A) and (B) show the baseline brain magnetic resonance imaging (MRI), October 2014. 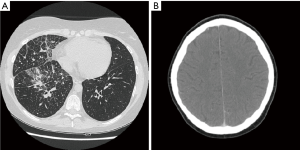 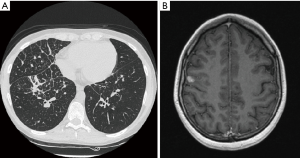 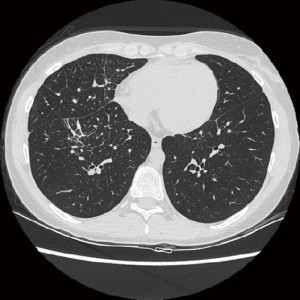 Subsequently, we assessed PD-L1 tumor expression with the use of PD-L1 IHC 22C3 pharmDx assay (Dako North America, Carpinteria, USA), with evidence of a PD-L1 tumor proportion score (TPS) ≥50%. Currently the patient is being evaluated for lorlatinib compassionate use or for a second line treatment with anti PD-1 monoclonal antibody.

Target therapy for lung cancer patient is an up growing field and ROS1 rearrangement is one of most recently detected targetable gene. Here we describe a dramatic and long-lasting response to Crizotinib treatment in a NSCLC harboring ROS1 rearrangement.

The gender, the young age, the no smoking habit of the patient, the histological and staging features of the disease (mucinous lung adenocarcinoma stage IV at clinical onset) are all NSCLC ROS1+ peculiarities as confirmed by Zhu’s meta-analysis (3).

Evidence in literature reported the ROS1 translocations as a crucial event in tumourigenesis of lung adenocarcinoma in young patients. In particular, Scarpino et al. presented 6 of 6 cases (100%) of lung adenocarcinoma diagnosed in patients <30 years of age translocated for ALK (4 cases) or ROS1 (2 cases). The six patients <30 years of age (5F/1M), including two pediatric patients (¡Ü18 years old), presented with stage IV disease, were never or light smoker, and had no family history of pulmonary tumours (5).

Approximately 10% to 25% of patients with lung cancer are initially diagnosed with brain metastases. In our case, the patient was diagnosed with a miliary brain metastases dissemination, characterized by the presence of multiple punctate tumor nodules with a perivascular distribution, that is a rare manifestation of brain involvement and often is linked to lung adenocarcinoma. In the presented case the combination of WBRT and crizotinib ensured 7 months of intracranial time to progression (IC-TTP). At the brain oligoprogression, the patient performed a SRS on growing brain lesions and continued the TKI treatment with a long lasting clinical benefit and radiological response. The second IC-TTP occurred after other 16 months. The thoracic radiological evaluation, after the initial partial response, showed a further dimensional reduction of the lung mass, still ongoing with a thoracic progression-free survival (PFS) of 23 months.

To our knowledge, there is only one report in literature of progression in the brain with persistence of response in extracranial sites in NSCLC ROS1 rearranged patients (6). In selected case of oligometastatic progression, integration of Crizotinib treatment with other local therapeutic options such as surgery, radiofrequency ablation, radiotherapy or local ablative therapy could be considered.

Clinical activity of a 2nd generation ALK TKI, ceritinib, in ROS positive NSCLC has been evaluated in a phase II study, showing, among the 28 evaluable crizotinib naive patients, an ORR of 67% and a median PFS of 19.3 months with ceritinib treatment (9). In the STARTRK-1 and in the ALKA-372-001, entrectinib, a next generation ALK TKI, was well tolerated and active against 14 crizotinib naive patients with ROS1 gene fusions with an ORR of 86% (10). Ceritinib and entrectinib demonstrated intracranial activity in preclinical studies but they are both unable to overcome ROS1 mutations and other mechanisms of resistance reported in patients relapsed during Crizotinib treatment. Results from single-arm phase I and II studies and retrospective analyses strongly supported that ROS1-targeted therapies are superior to standard first line platinum based chemotherapy. The optimal first line ROS1 TKI and second line TKI sequencing aren’t yet defined.

Another drug that is been evaluating in ROS1+ patients is cabozantinib (ClinicalTrials.gov identifiers NCT01639508).

It is unknown whether PD-1/PD-L1 are differently expressed in oncogene addicted NSCLC. In a retrospective cohort of 125 metastatic NSCLC, D’Incecco et al. showed that immune checkpoint PD-L1 expression was high in patients with EGFR mutations and ALK translocations (12). No data for ROS1+ patients and immune checkpoint expression are available so far. Given the high tyrosine kinase domains homology between ALK and ROS1, we could suppose that ROS1 rearrangements may have a potential effect on checkpoint PD-L1 expression, as described for other driver mutations.

In summary, this case report presents a prolonged PFS in a young patient with an expectation of poor prognosis. It may indicate that the integration of crizotinib with local treatments should be considered in ROS1 NSCLC patients experiencing oligometastatic progression. New ROS1 inhibitors, such as lorlatinib could be a future option in patient with uncontrolled brain disease, but in this case, expressing PD-L1 in more than 50% of tumour cells, immunotherapy is a valid option. In particular, considering the expression of both target gene and PD-L1, the association of target therapy with immune checkpoint inhibitors could represent a valid therapeutic choice.