Lung cancer has become the worldwide leading cause of cancer-related mortality nowadays and non-small cell lung cancer (NSCLC) accounts for 80% of all lung cancers (1). Among patients with NSCLC, 15% are diagnosed with stage IIIA (2-4). With the acknowledgement that mediastinal lymph node metastases (N2 staging) are associated closely with treatment and prognosis, the optimal management of stage IIIA-N2 NSCLC patients is unclear. Variable results of surgery versus radiotherapy after induction chemotherapy were reported (5,6). Nevertheless, despite surgical resection is radical and may lead to a survival benefit, whether the surgery is superior to radiotherapy is still controversial (7).

Furthermore, the difficulty of accurate clinical staging challenges the treatment scenario of those patients in this stage. According to the 7th edition AJCC TNM staging, NSCLC patients with ipsilateral mediastinal and/or subcarinal lymph node (N2) diagnosed as IIIA stage include T1–T3 (T3: tumor >7 cm or invades) and M0 (without distant metastasis) (8,9). Moreover, the precise designation of mediastinal or subcarinal lymph node also plays the critical role in the classification (10). The false positive rate of the noninvasive staging reaches 25% to 40%, and it is recently reported that the clinical nodal overstaying rate is 43%. However, the invasive method such as mediastinoscopy or biopsy is done with varying frequency and effectiveness. (11-13). Therefore, the clinical stage evaluation of IIIA-N2 NSCLC patients is needed to be more precise and the issue whether IIIA (cN2) cases are resectable or unresectable (treated mainly with chemotherapy or radiation) is still controversial.

The Surveillance, Epidemiology, and End Results (SEER) database of the National Cancer Institute provides information on cancer occurrences in 18 areas of United States and covers approximately 26% of the population (14). We perform this database study to evaluate the outcomes of patients treated with surgery, radiation, or both of them with different sequences. In addition, we investigate several relevant potential factors to clarify how they affect the outcome and hope to provide more information for clinical treatment decision-making.

We conducted this retrospective study using the data retrieved from SEER database of National Cancer Institute through the SEER*Stat software version 8.3.2. For we had no access to the identities of patients included, the informed consent was not deemed as necessary in this population-based research.

Histologically confirmed NSCLC patients diagnosed between 2004 and 2011 were selected by us from SEER. Patients were further specified as being clinical stage IIIA [7th editions of the American Joint Commission on Cancer staging manual (8)] T1-3, N2, and M0. Patients with missing data for treatment were excluded. The study was approved by ethic community of Shandong Provincial Hospital afflicted to Shandong University (ID: 2017-222). All the experiments described here were performed in accordance with the approved guidelines.

We collected relevant information of those patients, which included patient ID, age, sex, characteristics of tumor (size, location, histologic type and differentiation grade) and treatment details (surgical type and radiation sequence). The outcome endpoints studied in this research are overall survival (OS) and lung cancer-specific survival (LCSS). Thus, we retrieved the vital status, cause of death and survival months of the patients.

The Kaplan-Meier method was used to estimate OS and LCSS. OS was the interval from the time of diagnosis to death of any cause, and LCSS was defined as the time from diagnosis to death of lung cancer. We analyzed the OS and LCSS as a function of 5 different treatment interventions in overall patients and each of 19 subgroups and used the log-rank test to evaluate the difference of survival between 5 treatment subgroups. Cox Proportional Hazards Regression Model was used to estimate the effects of multiple variables on survival. All tests were two-sided and P values less than 0.05 were considered to be statistically significant. All statistical analyses were conducted using SPSS statistics (version 22, IBM). 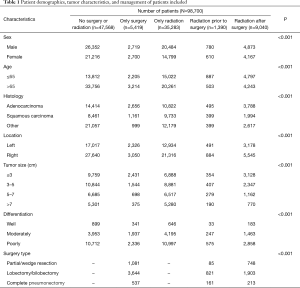 In the multivariable analysis of OS and LCSS, the variables of sex, age, tumor size, differentiation degree, surgery type and therapy were statistically significant (P<0.001), with only squamous cell carcinoma (P=0.902 for OS and 0.329 for LCSS) excluded. Results of univariate and multivariate Cox regression of prognostic factors for OS and LCSS in stage IIIA (cN2) NSCLC patients were stated in Table 2. 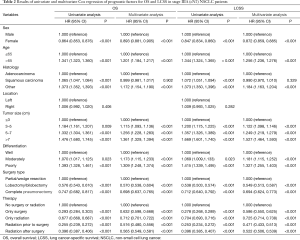 The OS, LCSS were estimated by Kaplan-Meier method (Figures 1,2), which showed that for those IIIA-cN2 patients, all of the four treatments improved the survival of patients (P<0.001). Survival of patients treated with surgery was better than that of patients treated by radiotherapy alone (P<0.001). Besides, radiation prior to surgery was the optimal sequence among the four managements. The survival analysis by log-rank test showed that there were significant differences between each two of them with every P value less than 0.001. 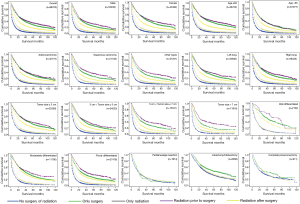 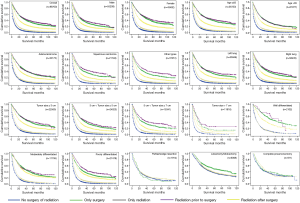 In the subgroup analysis, the same optimal order of the managements was observed in every subset. Based on the results of OS analysis, in the subgroups of age >65 (P=0.902), adenocarcinoma (P=0.279), tumor size ≤3 cm (P=0.170), well differentiated (P=0.360) patients, the survival of patients treated by radiation prior to surgery showed insignificantly difference from that of patients given surgery alone. Besides, there was no significant difference between natural outcome and outcome of patients given radiation alone (P=0.132) in well differentiation group.

According to the LCSS analysis, preoperative radiation showed significant superior to surgery alone in male (P<0.001), right lung location (P=0.019), tumor of 5–7 cm (P=0.005) and poorly differentiated (P<0.001) patients. Moreover, in well differentiated patients, compared with natural outcome, the survival improvement of radiation was insignificant (P=0.490). The P values of the overall and every subset survival analysis were listed in Table 3 for OS and Table 4 for LCSS. 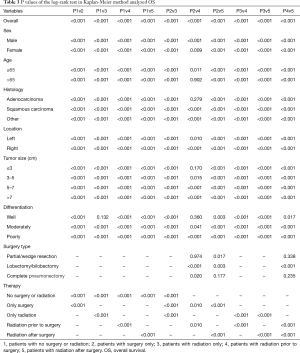 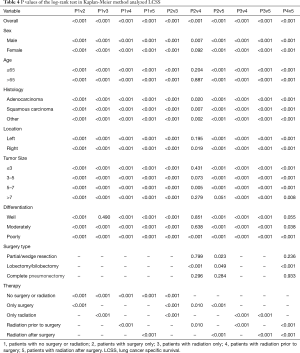 The role of surgery in stage IIIA (N2) NSCLC patients was still controversial. Radiotherapy or surgery had been operated singly or in combination to control the local tumor. It was reported in many studies that induction treatment followed by surgery had a survival benefit in selected IIIA (N2) NSCLC patients (15-19); however, several trials had failed to demonstrate the superiority of surgery over chemoradiotherapy (20-22). The main causes of the debate were the heterogeneity of stage IIIA definition ranging from T1N2-T3N2 (8,9) and the variation of determination of N2, including pathologically proven N2 (pN2) in the resected specimen or biopsy and radiologically determined clinical N2 (23). In previous studies comparing the different treatment sequences of this stage patients, eleven trials and meta-analysis reported that postoperative radiotherapy (PORT) was detrimental to patients with cancer resection and shall not be used in the routine treatment of those patients (24-26). However, there were some other trials pointing out that PORT was no benefit or detriment to survival for stage III disease and the effect was unclear, especially in patients with N2 (27,28). Besides, one population-based study using data retrieved from National Cancer Database (NCDB) showed that the PORT improved survival of stage IIIA (pN2) NSCLC patients treated with complete resection and multi-agent chemotherapy (29).

The NCI SEER database covers approximately 28% of the US population, which will include a larger population size than other clinical trials (30). In addition, the robustness of SEER database to determine the predictors of survival outcomes has been underscored by the revisions to the NSCLC AJCC TNM classification project (9,31,32). In this effort, we analyzed the survival data of stage IIIA (cN2) patients from SEER to compare the outcomes of different treatments and explore the potential clinical factors related with prognosis.

In the Cox-regression analysis, we concluded that male, age >65, squamous and other histologic types, larger tumor, poor differentiated patients were faced with higher death risk. Besides, the parameter of tumor location was excluded to be an independent prognostic factor. Other parameters such as age, sex and tumor size were identified meaningful factors.

However, our retrospective research was limited by the lack of some related data from the database and did not allow for randomization. The limitation of our study was mainly due to the lack of chemotherapy data of SEER. Many phase III RTOG clinical trials demonstrated chemotherapy along with radiotherapy prolonged the survival of stage III (N2) and the effect of chemotherapy could not be neglected (33). Moreover, it was possible that patients who received chemotherapy would be more likely to perform the operation, which would also cause the bias to the results favoring the surgery. Second, the radiotherapy arm of patients might be inoperable for comorbidities which also influenced their survival (34). Third, SEER database did not include many potential parameters influencing outcomes such as specific mutations, forced expiratory volume in 1 second and specific radiation technology. Besides, the infiltrative N2 status, such as the station and number of lymph nodes, was also considered to be valuable in the multi-modality treatment decision on this stage N2 patients as proposed by American College of Chest Physicians recently, which might provide more references for clinical research and practice.

In conclusion, our study showed that in SEER database, preoperative radiation with surgery was used less frequently in patients of clinical stage IIIA-cN2 disease, but had the most encouraging survival outcomes compared with radiation or surgery alone. However, in several subsets, such as the elder, adenocarcinoma, smaller tumor size and well differentiated patients, the preoperative radiotherapy was not necessary with the purpose of improving survival. In addition, the PORT was less recommended for those patients in this stage because of no significant outcome improvement. Further study was warranted to investigate the related clinical factors more comprehensively and analyze the survival benefit with the chemotherapy or tri-modality data to reach a more accurate conclusion for clinical therapy. Besides, the new treatment such as targeting therapy and immunotherapy could be evaluated and offer more options for the treatment of this stage patients in the future.

Ethical Statement: The study was approved by Ethic Community of Shandong Provincial Hospital Afflicted to Shandong University. The number/ID of the ethic approval was 2017-222. All the experiments described here were performed in accordance with the approved guidelines.