Malignant pleural mesothelioma (MPM) is a rare cancer (incidence 1/100,000 in the US) and is typically linked to asbestos exposure [about 80% of all MPM cases (1)]. The prognosis is poor [median survival 7 months (2)]. The incidence is highest in men (78%) in their seventh decade. Predictors for longer survival are female gender, young age, low cancer stage, an epithelioid histologic subtype and treatment with surgery alone or together with radiation (2). Chemotherapy with pemetrexed and cisplatin lead to a survival benefit of 2.8 months compared to cisplatin alone (5.7 vs. 3.9 months) in patients with unresectable MPM (3). Spontaneous regression of MPM is rare and has been linked to immunologic responses to the tumor; infiltration of immune cells (lymphocytes, monocytes) into tumor tissue has been observed in these cases (4). Strong CD8 lymphocyte tumor-infiltration is associated with better prognosis (5).

Viscum album extracts (VAE) are aqueous extracts derived from European mistletoe, a hemi-parasitic plant growing on different host trees (apple, pine, elm tree, oak and others). Commercial injectable VAE preparations are available for supportive use in patients with cancer. VAE are usually applied subcutaneously in an individually-adapted, dose-increasing schedule; however, intravenous and intratumoral applications, as well as intracavitary instillations, have also been reported (6). VAE contain mistletoe lectins, viscotoxins, oligo- and polysaccharides, flavonoids, triterpene acids, and other pharmacologically active compounds. VAE and particularly its lectins are strongly cytotoxic and induce apoptosis and increase cytotoxicity of chemotherapeutic agents. They can down-regulate a variety of cancer genes involved in tumor progression, reduce cell migration and interfere with tumor angiogenesis. VAE and its compounds show strong immune stimulatory effects (7-9). Clinical trials have found an improved quality of life of cancer patients treated with VAE (10); increased survival under VAE treatment has been reported in advanced pancreatic cancer patients (11). Case reports and case series have documented the regression of different tumor types after a high-dose, local application of VAE (6,12-14). Side effects include self-limited dose-dependent local skin reactions, flu-like symptoms, and occasionally allergic or pseudo allergic reactions. Beyond, VAE therapy is safe, even at higher doses (15).

The Christmas rose (Helleborus niger L., Ranunculaceae) is a winter-green, perennial, herbaceous plant, native to south-eastern Europe. Helleborus niger has been used for a variety of medical conditions since antiquity, also by Hippocrates and Paracelsus. Helleborus niger extracts (HNE) contain several pharmacologically active substances such as cardiac glycosides (hellebrin, deglucohellebrin), steroidal saponins, ecdysteroids, and γ-lactones (16). Helleborus niger was employed in the treatment of cancer, both in ancient western and middle eastern medical traditions (17,18), and is still used today, particularly in Integrative Anthroposophic Medicine (IAM) (19). Aqueous Helleborus niger extracts (HNE) in injectable form are commercially available. In vitro studies found strong cytotoxic and apoptosis inducing effects (20), but no clinical trials have yet investigated HNE in cancer treatment. We present the following case in accordance with the CARE-Guideline (21).

A 64-year old Caucasian woman with a BMI of 21.5, presented with increasing dyspnea, dry cough and reduced performance status. She reported slight weight loss, and back and flank pain, which had been occurring over the previous three months. No exposure to asbestos could be identified. The patient smoked 10 cigarettes per day. A CT scan showed a tumor expansion of the right side of the chest with pleural thickening of the basal parts of the pleura involving the complete ipsilateral pleural surfaces and a large pleural effusion. Furthermore, tumor invasion from the visceral pleura into the underlying pulmonary parenchyma was noted (Figure 1, upper panel). One of the larger paravertebral lesions measured 40 mm × 10 mm, and another larger paracardial lesion measured 35 mm × 10 mm. Enlarged lymph nodes included hilar (19 mm × 18 mm), subcarinal (19 mm × 11 mm) and slightly enlarged nodes in the peritracheal region, all of which were classified as metastatic. The tumor was classified as T2N1M0 (stage III). Six specimens of pleural thickening were obtained by thoracoscopy with a pleural biopsy punch. Pathologic investigation showed infiltration and undermining of the pleural stroma with polygonal epithelioid cell complexes; immunohistochemistry showed positive reactions to CK-5/6 and Calretinin, partially to CK-7, WT1 was nuclear positive, and BerEP4 negative (Figure 2). The histologic diagnosis of an epithelioid MPM was carried out by a pathologist from the local hospital and additionally confirmed twice—at the time of initial diagnosis and for publishing of this case report—by pathologists of the German mesothelioma registry (www.mesotheliomregister.de). 1,100 mL was drained from the pleural effusion. 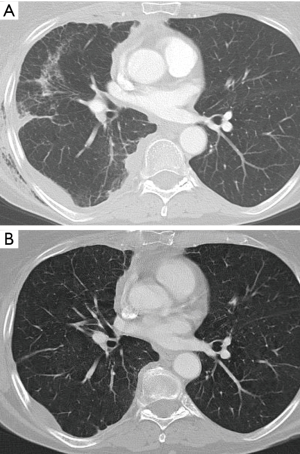 Figure 1 CT of initial diagnosis (A) and follow-up after 10 weeks indicating minor regression after treatment (B).

The patient decided against radiation, chemotherapy, surgery and pleurodesis, and consulted a general practitioner (GP) with a qualification in IAM. A treatment with subcutaneous VAE, HNE and further IAM medications was commenced (for details see Table 1). VAE treatment (preparations and doses) was adapted in response to the course of disease and local skin reactions. Therapy was intensified with intravenous VAE treatment during the period of stronger tumor progression (see Table 1). After VAE and HNE injections, the patient showed erythema and swelling of the injection site. After six weeks of treatment, the pleural thickening had regressed (Figure 1); the paravertebral lesion had decreased from 40 mm × 10 mm to 31 mm × 6 mm, the paracardial lesion had decreased from 35 mm × 10 mm to 38 mm × 7 mm, the enlarged nodes had decreased in size (hilar: from 19 to 14 mm, subcarinal: from 19 to 10 mm), and the pleural effusion had decreased as well. Subsequent CT scans showed stable disease and progression was only seen 38 months after initial diagnosis. 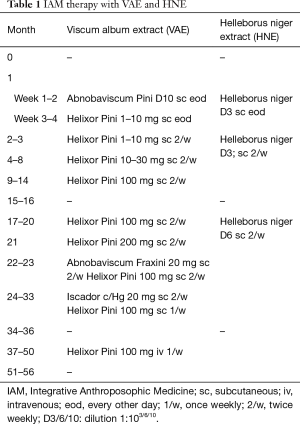 Pleural effusion had only to be drained 15 months after initial diagnosis, and subsequently every month. 34 months after initial diagnosis, a pleural effusion catheter system was installed; during this procedure biopsies were taken from the pleura and the diagnosis of an epithelioid MPM was histologically confirmed. Subsequently, 100–600 mL pleural fluid was drained approximately every second day.

As expected, VAE injections induced self-limited local erythema and swelling around the injection site up to a maximum diameter of 20 cm, which was tolerable for the patient. In general these local reactions are interpreted as indicators of the intended immune stimulation by VAE and are used for dose adaption (22).

Further medications included levothyroxine 25 µg and potassium iodide 196.2 µg (for a goitre and a thyroid nodule), citalopram 5 mg (for a minor depressive disorder; later reduced to 4 mg); Beclometason and Formoterol (for airway hyper-responsiveness), and vitamin D (for osteoporosis).

This MPM patient showed a favorable course of disease, with minor regression, stable disease for 38 months and survival for 56 months. She received no standard anticancer therapy (surgery, chemotherapy, radiotherapy) and was treated with VAE, HNE, and supporting IAM medications. The minor regression (about 15%) was confirmed twice by a radiologist: at the time of its conduction, and for publishing of this case. It should however be noted that the extent of regression failed to meet the 30% value as stipulated by the RECIST-criteria (23). The pathological diagnosis of the epithelioid MPM was confirmed by a reference center and reconfirmed with further biopsies later in the course.

This is the second detailed case report describing long-term survival of a patient with MPM undergoing VAE and other IAM treatments alone, without conventional cancer treatments. Another case report described a transient regression and longtime survival (73 months till publication) in a male MPM patient (stage III); here, VAE had been installed also intrapleurally using high doses (besides subcutaneous application), followed by pleurodesis, fever response, eosinophilia, blistering skin reactions, and improved performance status (Karnofsky 100% at publication) (24). The use of VAE in MPM was reported in two further articles. The first shows 9 patients surviving between 8–78 months (2 dying after 17 and 50 months; 5 still alive after 8, 24, 24, 27, 38 and 78 months; one was lost to follow-up after 68 months) (25); the second reports one patient surviving 49 months and another nearly 3 years (26). These survival times of MPM patients treated with VAE seem rather long in comparison with reported median survival times in larger registries typically around 7 months (27); and they seem comparable with survival times in investigations of long-time survivors of MPM (defined as survival for more than 3 years) after extrapleural pneumonectomy with a median overall survival of 60 months (28). Regarding the stage of disease in our case (stage III; regional disease) median survival times are usually ranging between 5.1 and 19 months—5.1 months in patients without cancer-directed surgery and 19 months in patients with histologically well-differentiated tumors (29).

Immunogenicity of MPM can be assumed because a high density of lymphocytes, especially CD8+ T cells, is associated with a better prognosis of the tumor (5) and strong infiltrations of lymphocytes and monocytes have been detected in cases of spontaneous regressions of MPM (4). For VAE, several immune modulating activities have been shown. These include the activation of dendritic cells, monocytes/macrophages, granulocytes, natural killer cells and T-cells; and the induction of various cytokines (e.g., GM-CSF, TNF-α, INF-γ, IL-6, IL-8) (31). GM-CSF, INF-γ, interleukins and activated dendritic cells have been investigated in MPM with positive results, and combined treatment was suggested to further improve the outcome (32).

With this in mind we presume a cytotoxic effect of VAE and HNE on MPM in our case—leading to an increased tumor antigen release; at the same time VAE may have stimulated immune processes to better process the tumor antigens in dendritic cells and to further enhance immune response against the tumor. The possible contribution of VAE to tumor control might therefore be explained as resulting from these immunologic processes.

This is a single case and spontaneous regression—though rare—cannot be ruled out. However, these are often associated with immunologic responses and as previously reported cases of VAE use in MPM showed positive results as well, a possible positive contribution of VAE to tumor control in MPM seems worthwhile to be further investigated.

We are thankful to Prof. Schirmacher from the Institute of Pathology, University Hospital Heidelberg, Germany who provided the confirmation of the histologic diagnosis of the patient, to Dr. Julia Kalinka-Grafe, Department of Radiology, Havelhöhe Hospital, Berlin, for radiological reassessment, and to the “Stiftung Integrative Medizin” for financial support.

Conflicts of Interest: The authors declared the following potential conflicts of interest with respect to the research, authorship, and/or publication of this article: IFAEMM has received restricted research grants, honorariums and travel expenses from Weleda, Abnoba, and Helixor. None of them had any influence on the design, conduction, analysis, and publication of the study. G Saltzwedel has no conflicts of interest to declare.

Informed Consent: Informed consent for the publication of the report, and the accompanying images, was provided by the patient’s next of kin. The submission version of the report was read by the next of kin, and the report’s content was confirmed as being correct to the best of her knowledge.